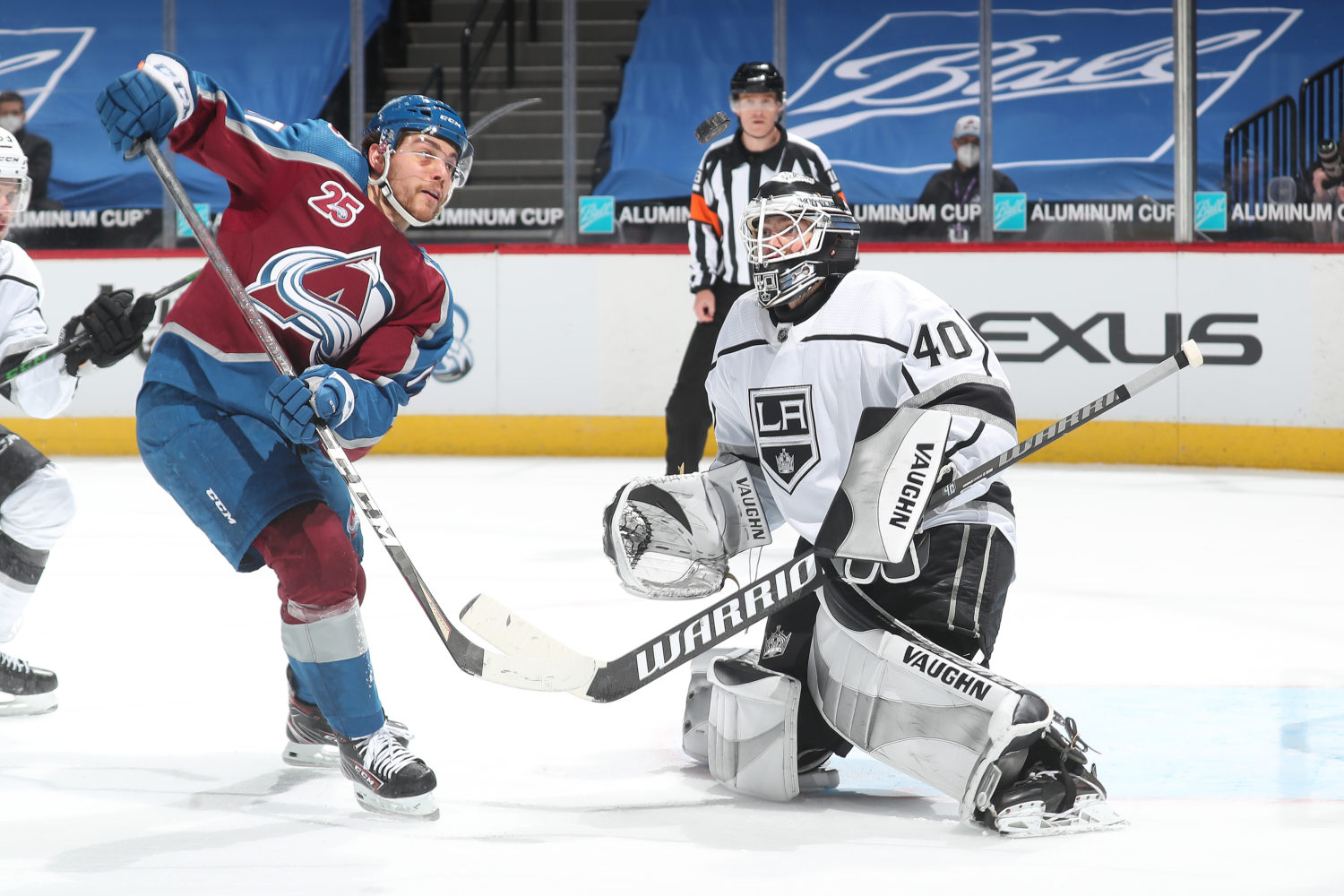 The LA Kings fell by a 2-0 margin on Friday evening in Colorado, opening a two-game set against the Avalanche with a defeat on the road.

Goaltender Cal Petersen was the star of the show from a Kings perspective, as he made 44 saves, the most of both his season and his professional career. Petersen was on his game from the get-go, after he was activated from the NHL’s COVID-19 Protocol list just earlier in the day.

The team in front of them did not have their best, as they struggled to slow down the Avalanche. Colorado had extended spells of offensive-zone time, which led to a 46-18 advantage in shots on goal, and an 80-35 advantage in shot attempts. The Avalanche also proved to be an extremely difficult foe without the puck. As you’ll read below, Todd McLellan said that Colorado’s speed without the puck was the best the Kings have faced this season, and that led to a tilted sheet of ice, towards the Kings defensive zone.

Despite Colorado controlling much of the run of play, they scored just one goal against Petersen, a seeing-eye shot through a few bodies in front that just found a way through, midway through the second period. The Avalanche continued to pour shot attempts on, and had their opportunities to find an insurance marker, but Petersen gave his team a chance to win down the stretch.

Outside of a few rush attempts, notably breakaway efforts from Adrian Kempe and Austin Wagner, the best offensive opportunities for the Kings came via a late power play, as they were able to establish the offensive zone. They generated some chances there, but Trevor Moore’s rebound effort from the slot was stopped, and defenseman Ryan Graves made a critical sliding block to deny a Kempe one-timer from the right-hand circle. Nathan MacKinnon iced the game with an empty-net goal less than 90 seconds from the final buzzer

Hear from Petersen and McLellan after tonight’s game.

Cal Petersen spoke to the media after tonight's game and addressed his experience with the COVID-19 protocol and the @LAKings effort against the #Avalance.#GoKingsGo pic.twitter.com/xOCwtAaYJh

On if tonight’s outcome was a matter of something that Colorado was doing, or whether it was the Kings not playing to their level
No, I think we’ve got to give Colorado some credit, they played a hell of a game, they’ve done that to a lot of teams lately. Their pace of play with the puck is evident, but their pace of play without the puck, their ability to take lanes away and force you into mistakes was as good as we’ve seen from a team all year. Now, our guys, our team to a man didn’t play well, we didn’t execute when we did have time, we didn’t make the plays we needed to make. This is a combination of both, but don’t take anything away from how well the Avalanche played.

On if Cal Petersen is at his best when he’s engaged with a high shot volume
I don’t know if I can answer that question right now. He’s faced some nights where he’s had to make some really good saves, and he’s done that. He’s been pretty consistent from the time we called him up last year to this point. Let’s face it, he’s been through a lot the last couple of days, he didn’t get the practice time that he would have wanted. For him to pitch that type of game for our group was pretty impressive.

On if today was one of the more challenging and hectic days of the season
It’s one of the most challenging ones. You think about the beginning of the year, where we lost Cal, Walker and MacDermid due to contact tracing. We’ve had different scenarios because we’ve had d-men come out because of injuries, forget COVID. Today was a juggling act. Somebody asked me this morning if we’re getting back to normalcy, or getting close, and at that time I knew what was going on. There’s no reason for us not to perform better, though. It has no impact on the performance of 20 others. We would have liked to have had those two players in the lineup, of course, but the ones that dressed didn’t give each other the game they needed.

On things he specifically didn’t like from tonight’s game.
We just quickly talked about it, who was our top player tonight, it was hard to pick one, other than the goaltender, that’s pretty obvious. After that, guys that typically have pretty good nights and can stabilize the team when it’s not going well, they struggled, and we didn’t have anyone else to pick them up really. It was team wide.

– Goaltender Cal Petersen made 44 saves on 45 shots against tonight. Petersen’s season-high coming into tonight’s game was 40 saves, made on 2/2 versus Anaheim, while his career-high was 43 saves, made on 12/11/18 @ BUF.
– The LA Kings blocked 23 shots tonight, setting a new season-high, and the most since March 1, 2020 @ VGK.
– The Kings were shutout tonight for the first time since 2/8/20 @ NJD.
– The 46 shots allowed tonight were a season-most for the Kings.
– Forward Alex Iafallo missed tonight’s game with an illness, ending his consecutive games-played streak at 177, which was the team’s longest active streak. The longest active Kings streak is now Anze Kopitar with 171 consecutive games played.

The Kings are scheduled to practice tomorrow afternoon at noon in Colorado.