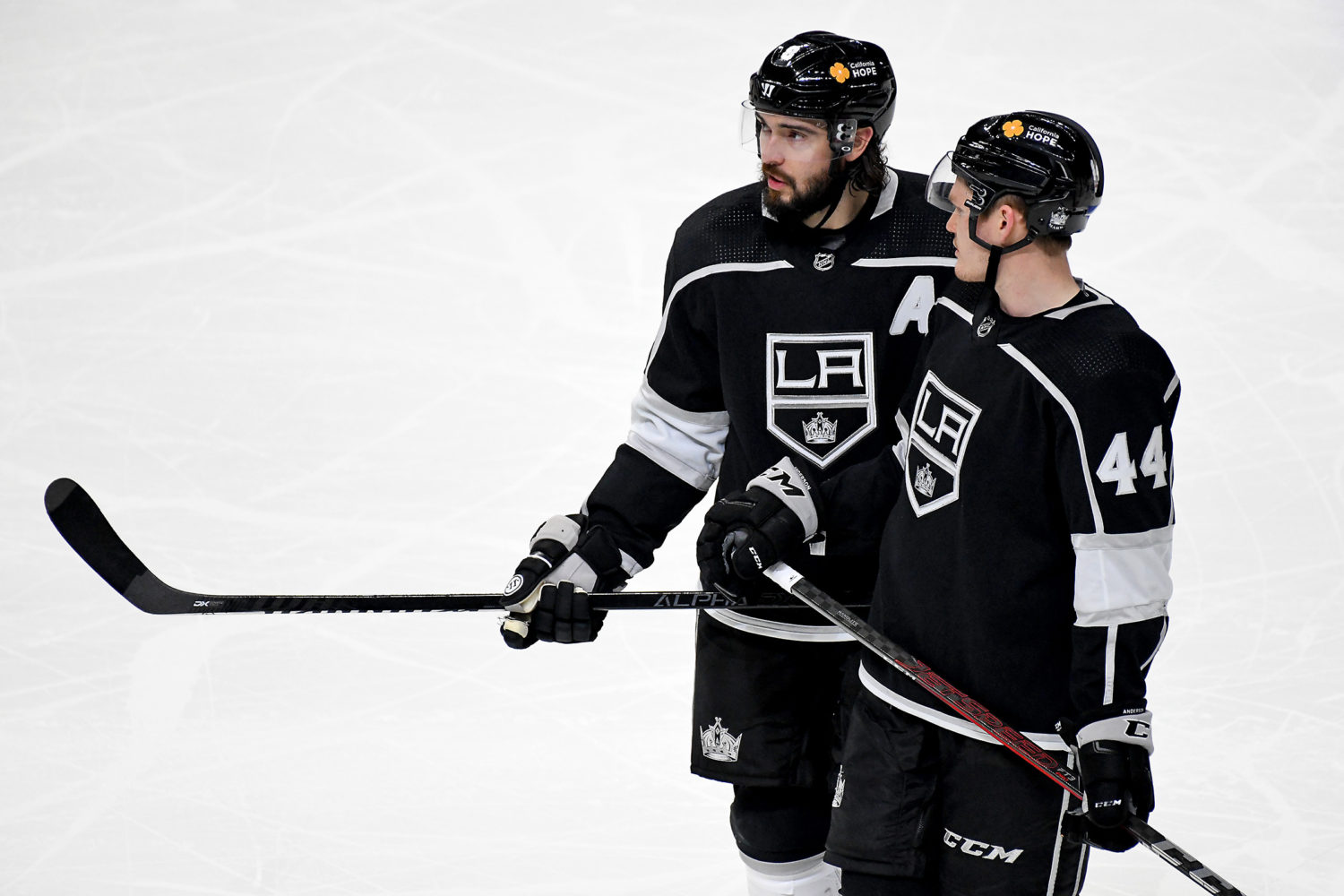 The LA Kings have seen notable improvements in many areas so far this season, but perhaps no one area has grown as much as the Kings have on special teams.

From their first 25 games played this season, the Kings have lost the special teams battle just four times, meaning allowing more goals on special teams than they scored. Both the power play and penalty kill rank inside the NHL’s Top 10 this season, making the Kings one of just three teams across the league in that boat.

“I think a lot of it is just how much we’ve worked on them, how much pride our coaching staff takes in preparing us for both sets of special teams,” defenseman Drew Doughty said. “PK is all about pride, blocking shots and doing whatever it takes to get the puck down the ice and kill the penalty. We’ve worked a lot on it over the last year, and Todd’s always had a good power play, everywhere he’s been. He knows what he’s doing and it’s clicking. We can’t take our foot off the pedal, we have to keep it rolling.”

Looking first at the man advantage, the Kings are not the only team across the NHL that has seen an improvement this season.

At 27.5% currently, the LA Kings rank sixth in the NHL, riding a six-game streak with at least one power-play goal, with three multi-goal games, and nine tallies in total, over that stretch. The Kings are finding different ways to get it done as well, with eight different players scoring at least one power-play goal this season, and six players owning multiple PPG’s.

That unit has inflicted the bulk of the damage, and that’s to be expected, as they receive the majority of the time. Kopitar has pointed to the confidence in the unit right now, as well as their ability to mix in different looks at different times, to keep things fresh.

“It’s a power play that is pretty confident right now,” Kopitar said. “We’ve been able to get on the board, and in saying that, sometimes we get caught in different spots. Everybody on the ice knows what the job is, so we’ve been able to throw out different looks, each and every night, and we’ve been successful so far.”

Don’t forget about Alex Iafallo and Adrian Kempe, either. Iafallo is perhaps the unsung hero of the group, for the work he does in-between the hashmarks, while Kempe has brought some added offense courtesy of the one-timer, as well as he prowess on zone-entries.

Kempe has four power-play goals already this season, all via the one-timer, and 11 power-play points, surpassing his previous career high, last season’s total, in 44 fewer games. Kempe’s role on zone entries has been perhaps even more important. His ability to help the Kings not only enter the offensive zone, but retain possession, has been a critical part of the team’s success. Brown called Kempe a “one-man zone entry”, and his head coach preached the importance of the zone entry towards establishing the power play.

“You can gain the entry on the zone the first time, or you can do it multiple times,” McLellan said earlier this season. “If you waste the majority of the power play just trying to enter the zone, you’re in deep trouble. Not only does it prevent the power play from being effective offensively, but it creates frustration and creates fatigue in a number of guys who need to create the whole ice surface. Adrian has been a key piece in the entries, not the only piece, but the key piece, and he’s fit that role extremely well.” 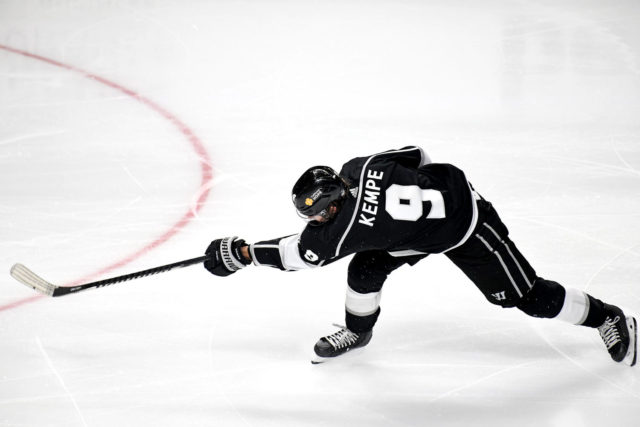 On to the penalty kill.

The penalty kill has had its ups and downs at times throughout this season, but when you rank inside the top third of the league, it’s been more ups than downs thus far. Monday’s perfect penalty kill ended a streak of three straight allowing a PPG, which came off the heels of four straight games without allowing one. Such is the life in a league when more than one of every five power plays results in a goal.

You’re not going to be flawless on the penalty kill throughout the course of a season, and the Kings know that.

“It’s hard to be elite and perfect on your penalty kill, there’s a lot of really good power plays in the league right now,” McLellan said.

Just like it’s a benefit for the Kings, other teams have their top, skill players on the ice when on the power play themselves, meaning that the Kings are faced against the other team’s best players each time they go down a man. It’s not unique to the Kings, but when you look at the quality of offensive players in the West Division, and the league=wide rise in power-play percentages, it makes the Kings overall success on the PK that much more impressive.

“You’re playing against the top guys, and they’ve all got a ton of skill, so you know they’re going to make plays,” defenseman Mikey Anderson said. “It’s trying to limit the amount they can make and give them the least scoring opportunities, less dangerous opportunities. They’re good players, they’re going to make plays, but at the same time, if we give something up, you tip your hat to them, maybe look at it and try and learn from it, but you’ve got to get back out there and try to stick with what you’re doing.”

Short memory. Ever so important on the man advantage.

McLellan believes that penalty killing comes down, first and foremost, to structure. Playing on the power play allows skill players to use that ability, within a system, to create. The penalty kill is the opposite. It’s about four, or sometimes three, players playing as one unit, reacting to the decisions made by one another and staying in sync.

The Kings’ head coach believes his team has done a good job of that thus far.

“To me, penalty kill has structure,” McLellan said. “Power play, it’s a little more artistry maybe, free play creativity, but penalty kill is structure. When one player reacts, the other three need to have some predictability of what’s going to happen next, so they can get ahead of it. In my mind, that’s how penalty kills work. This year, our penalty kill has been fairly strong.”

Beyond being in-sync in the zone, Anderson pointed out the importance of the neutral zone as something that he feels the team has done a pretty good job of.

He noted that while it’s not every entry that the Kings are able to simply shut the play down the neutral zone, there’s a small victory in forcing a dump in as well, not allowing the opposition to enter with possession. It’s been those specific little details – between not just trying to force dumps, but also handling those dumps well – that has been another element of success for the Kings this season.

“For starters, I feel like our neutral zone coming back, we’ve been pretty good at getting a good stand at the blueline,” Anderson said. “Maybe not killing the play right away, but forcing them to dump or rim a puck, and coming out of it, I feel like we get some good pressure on them, whether it’s a rim or a soft-corner dump.”

Like his head coach, Anderson has been happy, overall, with how the penalty killing unit has performed.

“I feel like our stand at the blueline has been good, and we’ve had a lot of guys buying in and blocking shots, trying to read off each other, one guy goes we all go,” he said. “Overall, I think we’ve done a pretty good job.”

Both special-teams units face a tough test this weekend, with a trip to Colorado. The Avalanche rank fifth in penalty-kill percentage this season, and seventh in total power-play goal scored. A good opportunity for the Kings, against a team that converted three of their ten power-play opportunities last time out. 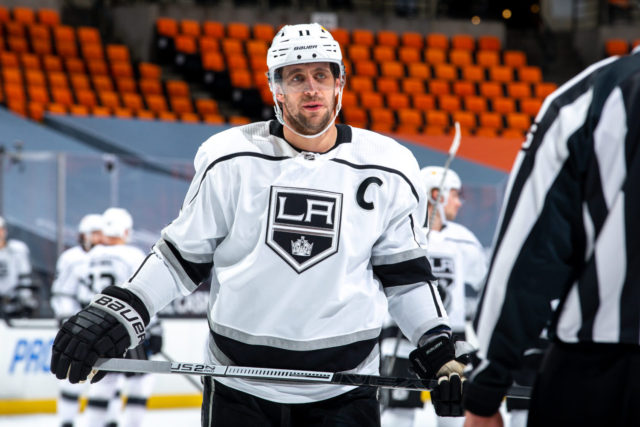 ANAHEIM, CA – MARCH 8: Anze Kopitar #11 of the Los Angeles Kings talks with a linesman during a break in the first period of the game against the Anaheim Ducks at Honda Center on March 8, 2021 in Anaheim, California. (Photo by Debora Robinson/NHLI via Getty Images)