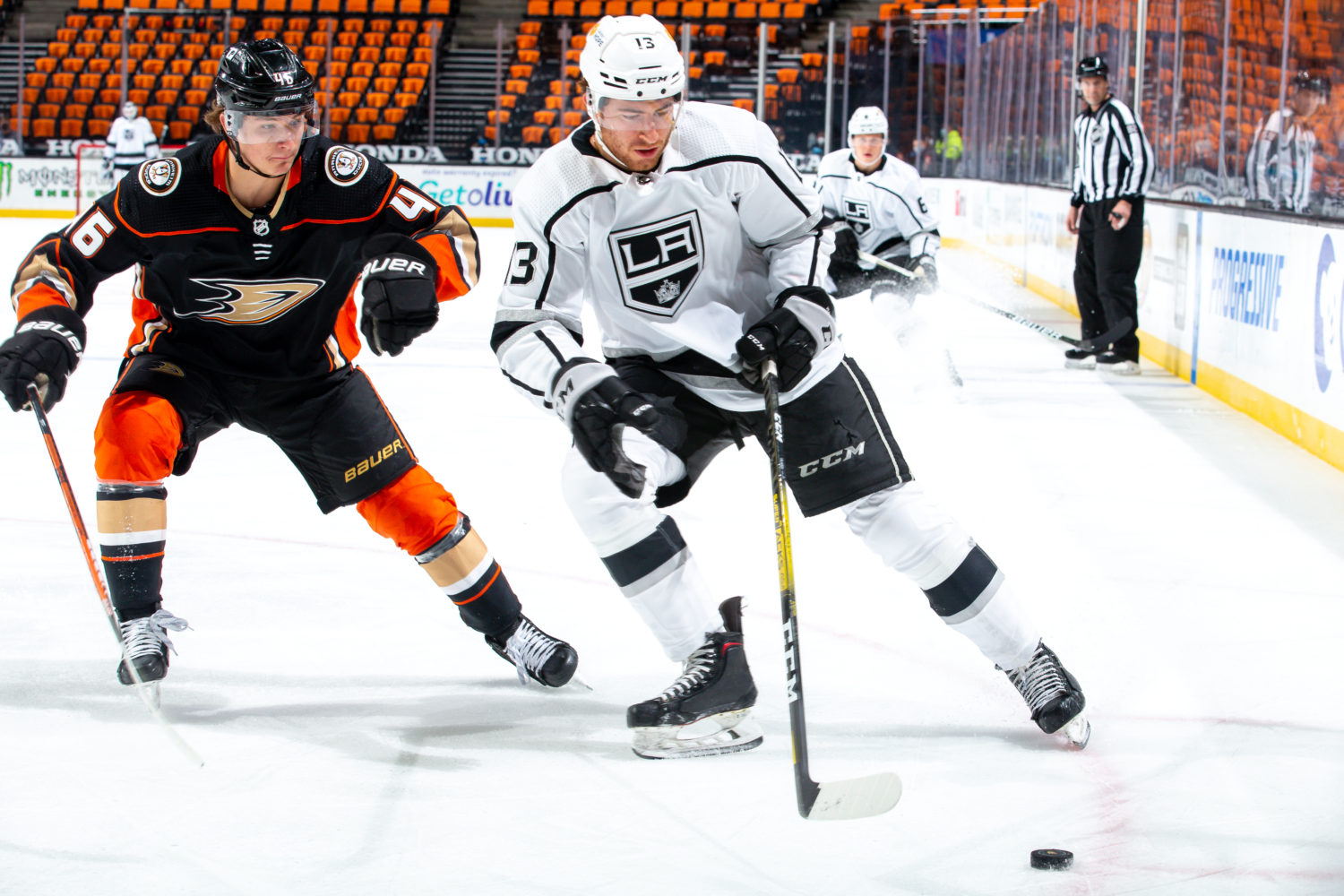 TONIGHT’S MATCHUP: The Kings and Ducks are back in action tonight, in a rematch at Honda Center. After tonight’s game, the two teams won’t play again until April 20, when they will square off five times in 12 days, including four straight games from April 26 – May 1.

HEAD-TO-HEAD: Courtesy of his three goals on Monday, the first-ever hat trick by a Kings player against Anaheim, Adrian Kempe leads all LA scorers with three points this season versus Anaheim. Defenseman Drew Doughty is the only King with points in both games, as he’s tallied three assists in total in the season series to date. For Anaheim, forwards Rickard Rakell (2-1-3) and Max Comtois (0-3-3) lead all Ducks skaters with three points from two games played.

KINGS VITALS: The Kings held an optional morning skate today, with Dustin Brown, Jeff Carter, Doughty and Cal Petersen not on the ice. Goaltender Jonathan Quick, who has missed the last two days with an injury, also did not skate, while defenseman Tobias Bjornfot did skate, after missing Monday’s game and Tuesday’s practice as he was “not feeling quite right.”

In terms of looking ahead to tonight’s lineup, there are outstanding questions right now for the Kings both on the backend and at forward. On defense, Bjornfot’s status remains up in the air. The 19-year-old skated this morning, indicating that systems might be a go, but he also skated on Monday before not playing that night. Consider him questionable at this time, but the expectation is for him to play. If he does not, Kurtis MacDermid, who checked in on Monday, and Austin Strand, recently recalled to the taxi squad from AHL-Ontario, are options.

“He’s out skating right now, pre-game skate, so we’ll see how he is,” McLellan said. “He was better yesterday, he’s getting close, we’ll have to make a decision on whether it’s worth the risk or not, but we’ll make that decision later today.”

Up front, the configuration over the last two days implies we could see Michael Amadio and Austin Wagner check back in at forward, in place of Rasmus Kupari and Matt Luff. Both Amadio and Wagner have appeared in 17 of the team’s 24 games so far this season, with Wagner’s six points (3-3-6) right in line with his rookie season in 2018-19.

We know at least one change will be made, however, with McLellan indicating that Kupari will head back to the Ontario Reign after playing in his first three NHL games. Whether or not we’ll see an additional change or not will be sorted out closer to puck drop.

In net, as the only goalie currently on the active roster, Petersen is 0-1-1 against the Ducks in his NHL career, after he allowed six goals in a game for just the second time in his NHL career (11/21/18, his fourth career NHL start). Combined with a 40-save performance earlier in the season, Petersen’s totals now sit at a .881 save percentage, and a 3.93 goals against average versus the Ducks.

DUCKS VITALS: Goaltender John Gibson, earned the victory in Anaheim on Monday, though we haven’t gotten reports on whether or not he starts again in tonight’s rematch. Gibson is 2-0-0 this season, and 12-5-0 lifetime, in head-to-head matchups versus the Kings. In his NHL career, Gibson has posted a .928 save percentage and a 2.01 goals against average against LA,

Here’s how Anaheim lined up in Monday’s series opener –

Forward Troy Terry (upper-body) and defenseman Josh Manson (lower-body) both left Monday’s game with injuries, and neither are expected to play tonight. Terry didn’t play a shift after the first period, while Manson’s last shift came late in the second period. Scratched on Monday were defenseman Josh Mahura and forward Danton Heinen. Mahura is expected to check in for Manson, while forward Vinny Lettieri is expected to enter the lineup in place of Terry.

The Kings have continued to struggle with their starts to games. They have now conceded the first goal in 17 of 24 games this season, and each of the last three games has seen the first shot on goal go in.

All-in-all, the Kings currently have the worst first-period goal differential in the NHL (-16), and the team knows what while they have shown an ability to fight back, and an ability to have success playing from behind, it’s not something they can sustain every game.

“I think our starts have been really bad,” forward Gabe Vilardi said this morning. “We talked with Todd about it, as a team, yesterday and it’s something that we’ve got to be better at. We can’t come from behind every game, it’s not going to work, these teams are too good. We made some adjustments yesterday, and hopefully today we can get the win.”

Regardless, however, the starts are still a big priority for the group. The Kings have placed an emphasis on improving them, and McLellan addressed it with an in-depth and lengthy response this morning.

“We discussed it yesterday as a group, and there’s a pattern,” he said. “It’s not a one-off, it’s a pattern of our starts falling behind. We talked about the resilience of the group, the ability to fight back, all of those characteristics are really good ones to have within the locker room, but where are we for the first 10-12 minutes of the game? It’s certainly something we have to improve on. It’s not one area we can put our finger on, it’s not like we’re poor defensively, losing faceoffs, power play / penalty kill…every night it seems to be something different. Let’s try and clean that stuff up, see what we can do with playing with a lead, it’s been a while. Sometimes, that other team gets in the way too in their playing. We’ll work on it.”

I think it actually got lost a bit on Monday considering Adrian Kempe’s hat trick, but this goal merits another look here.

“Pretty Nasty” was how Vilardi put it this morning, and it’d be hard to put it any other way.

Andreas Athanasiou has brought something different to the Kings this season, hasn’t he? A pure infusion of speed and skill into the lineup. It’s something that the Kings haven’t necessarily had over the past few seasons. Athanasiou’s wheels are one thing, and you saw them on display last night as he beat out a couple of icings, and drew a penalty that led to……well a shorthanded goal against, but I digress. His skill and offensive instincts are another, with McLellan labeling him as “slippery”, which has allowed him to maneuver around defensemen with the puck.

“He’s fast, slippery player, and we haven’t seen that a lot [in our lineup],” McLellan said. “The goal he scored the other day, he comes up with a loose puck and his escape skills, we don’t talk a lot about that, but his ability to escape out of crowds, or dart to open ice and buy him or his teammates some time is significant. He used it the other day, and it just adds a different ingredient into the mix and we’re fortunate to have him right now.”

Coup de Vilardi
Forward Gabriel Vilardi spoke with media this morning on a variety of topics, including what he’s taken from Anze Kopitar’s game as they’ve spent more time as teammates, establishing consistency in his game as a younger player, his line with Athanasiou and Carter, and a few other topics.

Game Thread is next, from Anaheim!

By Zach Dooley
59 Comments
Behind the Scenes

The Kings were back on the ice this afternoon in Arizona for a full team practice at Gila River Arena.

By Zach Dooley
617 Comments
Behind the Scenes