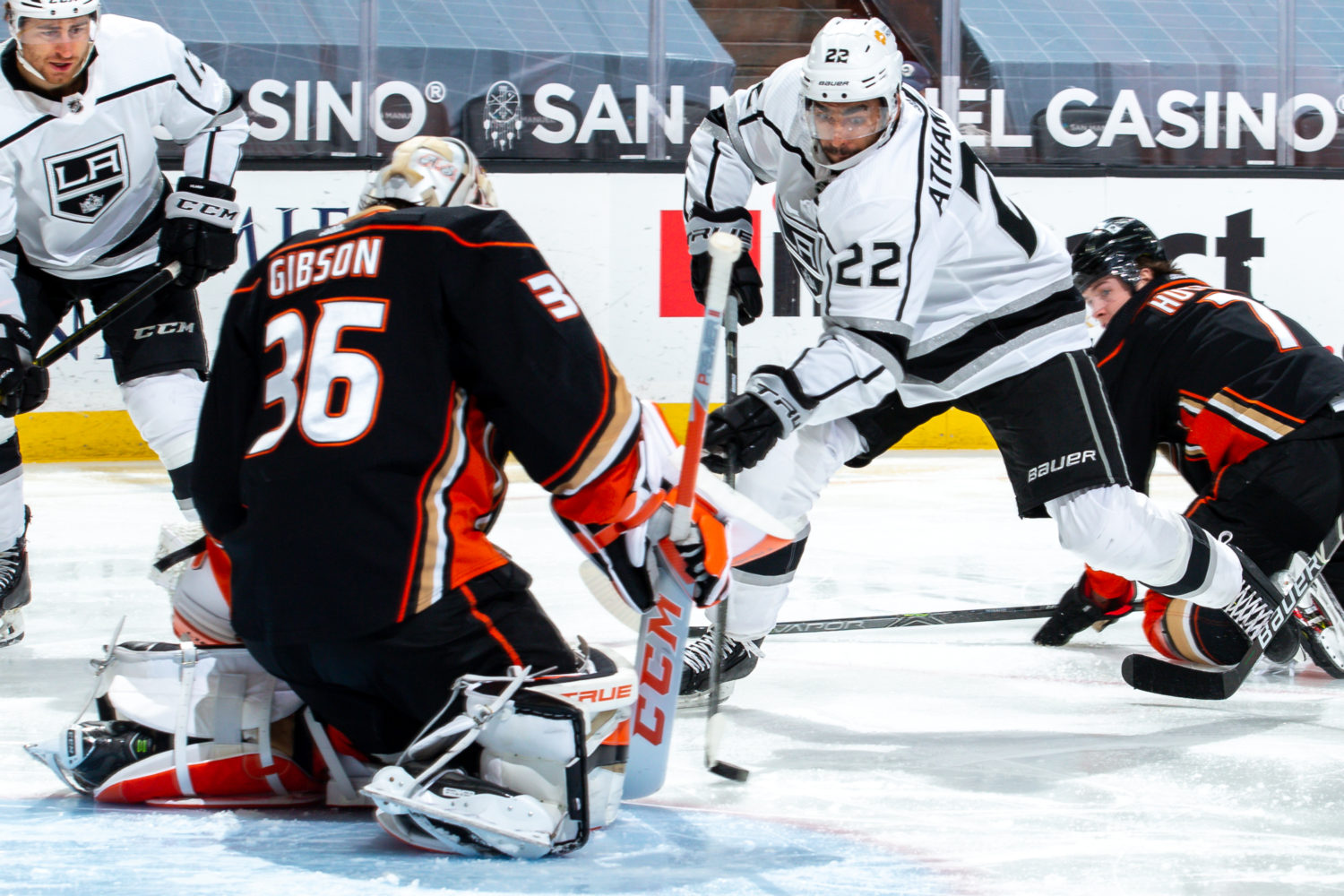 Ups and downs, ebbs and flows, peaks and valleys. Tonight’s game in Anaheim featured a lot of all of the above, but the Kings found themselves on the wrong side of it at the end of the game, in a 6-5 overtime defeat against the Ducks.

Offensively, the Kings got a hat trick from forward Adrian Kempe, created two goals on the power play, had a dazzling individual effort from Andreas Athanasiou and overturned a two-goal deficit in the third period to earn a point. Defensively, however, far too many breakdowns led to pucks in the back of the Los Angeles net, and ultimately that was what did them in.

Kempe collected his second career NHL hat trick, and now has five goals in the five games since head coach Todd McLellan said he needed to get more production from the 24-year-old forward. He scored both on the power play, and at even strength, with all three goals coming in different ways. The Kings got another goal from Dustin Brown, and another multi-assist game from Anze Kopitar, as both continued their impressive seasons that have them positioned amongst the league leaders.

Ultimately, however, it was what happened at the other end of the rink that did the Kings in. An inability to get timely clears, stop timely rushes, and make defensive plays when they were needed resulted in six goals against, and that’s just not going to lead to a victory on too many nights.

What could have been the game-winning goal, had the Kings not tied the game late, will be one that sticks with them, as they had several opportunities to clear the danger and were unable to do so. You can’t pin a game with eleven total goals scored on one of them individually, but that’s one they will surely have wanted back.

All in all, the Kings now have points from four of their last five games, despite just one win in that span.

Hear from Kempe and McLellan after tonight’s game.

On balancing the resiliency shown by the group, versus the individual mistakes
In the St. Louis game, we were happy with the resiliency, tonight we were really disappointed with the mistakes. Six goals against is your answer. We had some dismal performances by some individuals, and yet there were some others who had great games. Half the team was ready to play, and the other half still isn’t ready to play and the night’s over. That’s disappointing.

On if he felt the Kings got caught in a “track meet” again tonight
No, I didn’t think it was a track meet at all, I didn’t feel like it was going up and down the ice, I just felt like we were really, really sloppy. Way too many individual mistakes, the turnovers off our tape, the lackadaisical play, how we handled some of the 2-on-1 rushes. It had nothing to do with a track meet, it was just sloppy. It’s perhaps the hardest game to play when some guys are really on and other guys are really off, because it just screws everything up.

On Adrian Kempe’s play tonight, and if that’s more of what the Kings need offensively from him
Absolutely. It was about five games ago, we asked him to find a way to contribute a little bit more, and he certainly has offensively.

On the Kempe – Lizotte – Moore line tonight
Other than their first shift, when they got scored on, I thought they won the majority of the shifts they played. Throughout the night, they were willing to forecheck, they had a tenacity to them that kept a lot of plays alive. A lot of simple plays, strip the puck, make one pass, shoot it. They didn’t have to get cute, they didn’t try to over-create, they were a pretty consistent line the whole night.

On the goal waived off for incidental contact
Officials signaled good goal on the ice. Right away, we go and look at the video and we thought that was our only chance, if we could get away with a good goal on the ice and then they wouldn’t have enough to turn it over. They got together, they did what they were supposed to do, they overruled it, and then it was up to us to challenge. We didn’t feel like we were going to win that and we didn’t want to put our team shorthanded in the last three minutes.

– With three goals tonight, forward Adrian Kempe now has seven points (5-2-7) over his last five games played. Kempe’s multi-goal game was his first of the season, and his first since 1/9/20. He recorded his second career NHL hat trick (October 18, 2017)
– With two assists tonight, Anze Kopitar extended his scoring streak to five games, his second 5+ game scoring streak of the season. Kopitar is now tied for fourth in the NHL in assists on the season and ranks seventh in points.
– Dustin Brown collected his seventh power-play goal of the season in the second period, moving him into a tie for second in the NHL. With 13 total goals on the season, Brown is tied for fifth leaguewide in goals.
– With his third-period tally, forward Andreas Athanasiou has collected a point in five of his last seven games played.
– Including tonight’s game, the Kings have now given up the first goal in 16 of 23 games played this season. The Kings have given up a goal on their first shot on goal against in three straight games.
– Jakob Silfverberg’s shorthanded goal was the first SHG the Kings have allowed this season. They entered tonight’s game as one of six teams in the league to now allow one.

The Kings are scheduled for an 11 AM practice tomorrow at Toyota Sports Performance Center.