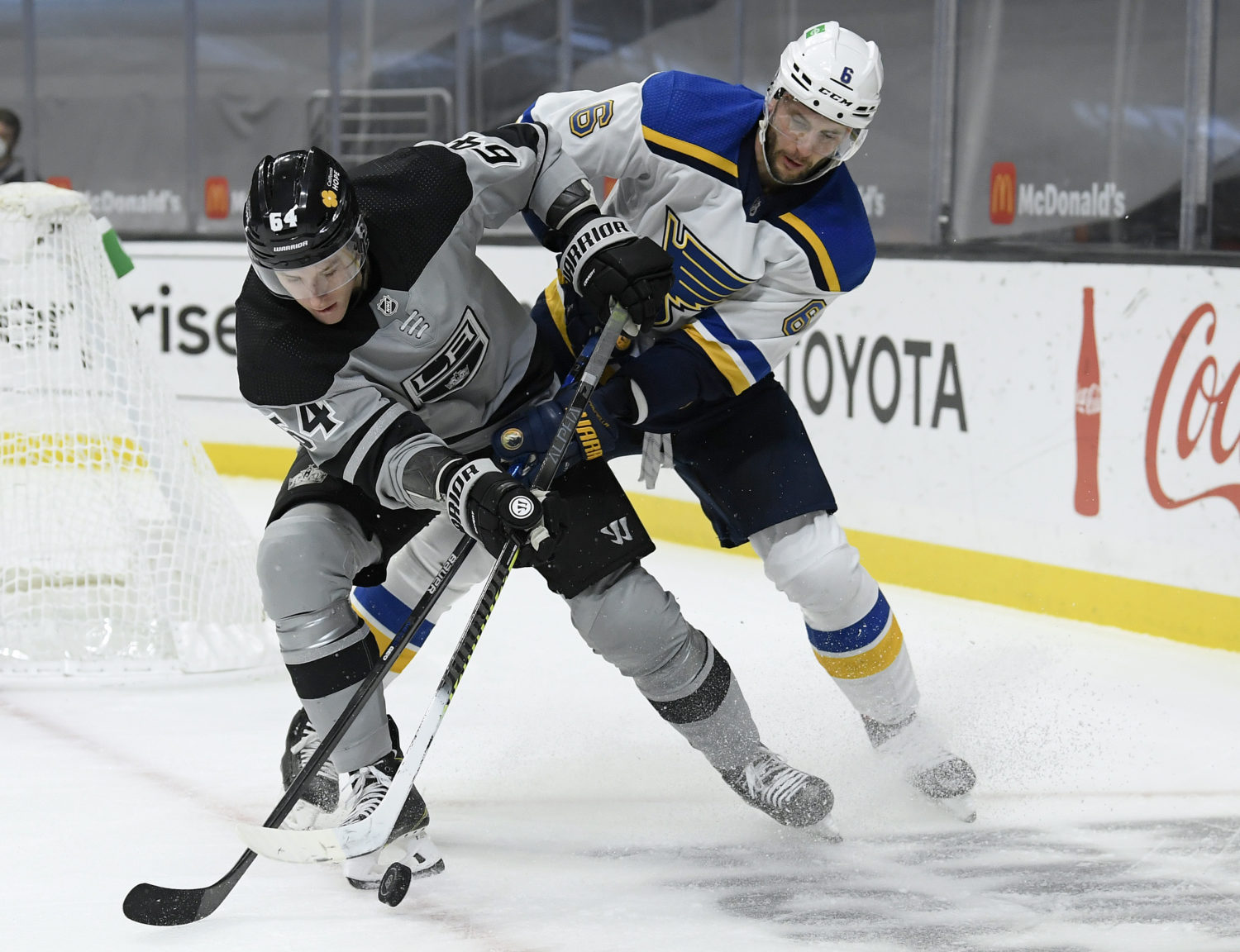 If you watched the two games between the Kings and Blues, you’d likely have expected a split. You would have expected the Kings to close out a hard-fought victory on Friday evening, followed by a Blues response victory, powered by three first-period goals on Saturday.

That’s not how hockey works sometimes, though.

The Kings conceded a late goal on Friday and were not able to close out a well-played game against a difficult opponent. The Blues could say the same thing, and then some, on Saturday, as they squandered a three-goal lead in a 4-3 Kings comeback win, their first under such conditions since 2014.

Perhaps the biggest loser from this weekend were the other teams in the Pacific Division. Regardless of their feelings towards which team won the games, a split in which both teams pick up three points is a worst-case scenario for those not participating.

It’s too early to standings watch, or to root against a particular team, but Saturday’s game, considering the opponent, the prior night’s result and the implications in the standings, felt especially important. The Kings were able to make much-needed adjustments midway through the game, which enabled them to get out of a track-meet style contest that doesn’t suit them and play their brand of hockey. The differences between the first period, and there on after, were noticeable.

“I would say the turning point was the [first intermission], when we decided that we couldn’t play a track-meet style game against that team,” Todd McLellan said after the game. “We had to get back to playing the type of game right now that suits our team.”

Leading the charge across the two games was Anze Kopitar, who has been at the forefront of his team’s success all season long. Kopitar had two goals and two assists, as he factored into four of his team’s six goals in the two-game set.

It’s always a good sign when your best players are your best players. Kopitar has been that, and then some, for the Kings this season. It’s never been about just the points for Kopitar – On the nights where he isn’t on the scoresheet, he’s still the same Selke Trophy winning player in other areas of the rink. He’s only been a point-per-game player once in his NHL career, in 2017-18, when he was a finalist for the Hart Trophy.

Saturday was a prime example of how effective he can be when he’s got the points going to match all of the other stuff. At 1.28 points-per-game this season, Kopitar is scoring at the highest rate of his NHL career.

“I’ve been around him for a year and a half, and I don’t see a huge difference in his game,” McLellan said. “It’s almost like he clones one game after another. Maybe he’s getting a few more scoring chances, maybe he’s being able to bury them, or set a few more people up, but he’s about as consistent a player as I’ve been around in my 20 [plus] years of pro hockey.”

It was Kopitar’s play that drove the bus back onto the right path on Saturday. With the team staring down a 3-0 deficit, one night after giving up a lead late, some teams might have rolled over. Here, however, it was the captain who dragged the team back into the game.

His first goal stopped the bleeding, and his second goal on the power play seemed to really turn the tide. His pass to Matt Luff for the goal late in the second period was the icing on the cake, a perfectly weighted pass to a teammate who he has played just five minutes with this season. When Kopitar is going, others follow.

“No one man does it by himself, but when your top player, or players, decide they’ve got to reel the game back in and do it the right way, it’s real easy to follow,” McLellan said. “It doesn’t always produce results, but you have no choice but to follow, you can’t go off on your own program. I don’t care who you are, when the alpha decides to play the right way, everybody else follows. That’s tremendous leadership.”

Beyond Kopitar, you have to like a lot of the different things that the Kings did against the Blues this weekend.

Gabriel Vilardi showed his offensive intuition across the two games, as he set up several chances, and was finally rewarded with the assist on the game-winning goal. That pass was a thing of beauty, and showed the natural playmaking abilities he possesses. He’s starting to become more and more confident in the offensive zone, and we’re seeing what he can do on a more consistent basis.

Adrian Kempe scored the overtime winner and has two goals and four points from four games played, since McLellan said that he needed to see more. Matt Luff chipped in with a huge goal in the second period, providing some offense from a bottom-six player. Before Luff’s goal, the Kings had just one 5-on-5 goal from the bottom six over the last six games. Getting contributions here and there from those kinds of players will be important, to take some of the scoring burden off of the Kopitar line.

From an analytics standpoint, Mikey Anderson had his best series of the season, as the Kings controlled 62 percent of shot attempts while Anderson was on the ice. He’s been on the right side of the Corsi in six of his last eight games, skating against the opposition’s top players every night.

Looking ahead, the Kings will need to sort out their starts, which seem to have reverted to showing signs of their early-season struggles opening games. They have scored the first goal just eight times in 23 games this season, and have conceded the first goal in each of their last five games. The Kings have faced multi-goal deficits in four of those five games, including three, 3-0 deficits. Saturday’s win was thrilling, and a great sign of resilience, but overturning three-goal leads isn’t a sustainable method of success.

The games continue to come, hot and heavy, over the next two weeks. It’s no more than one day off between games over the next 10, which features six games against the Top 3 teams in the West Division.