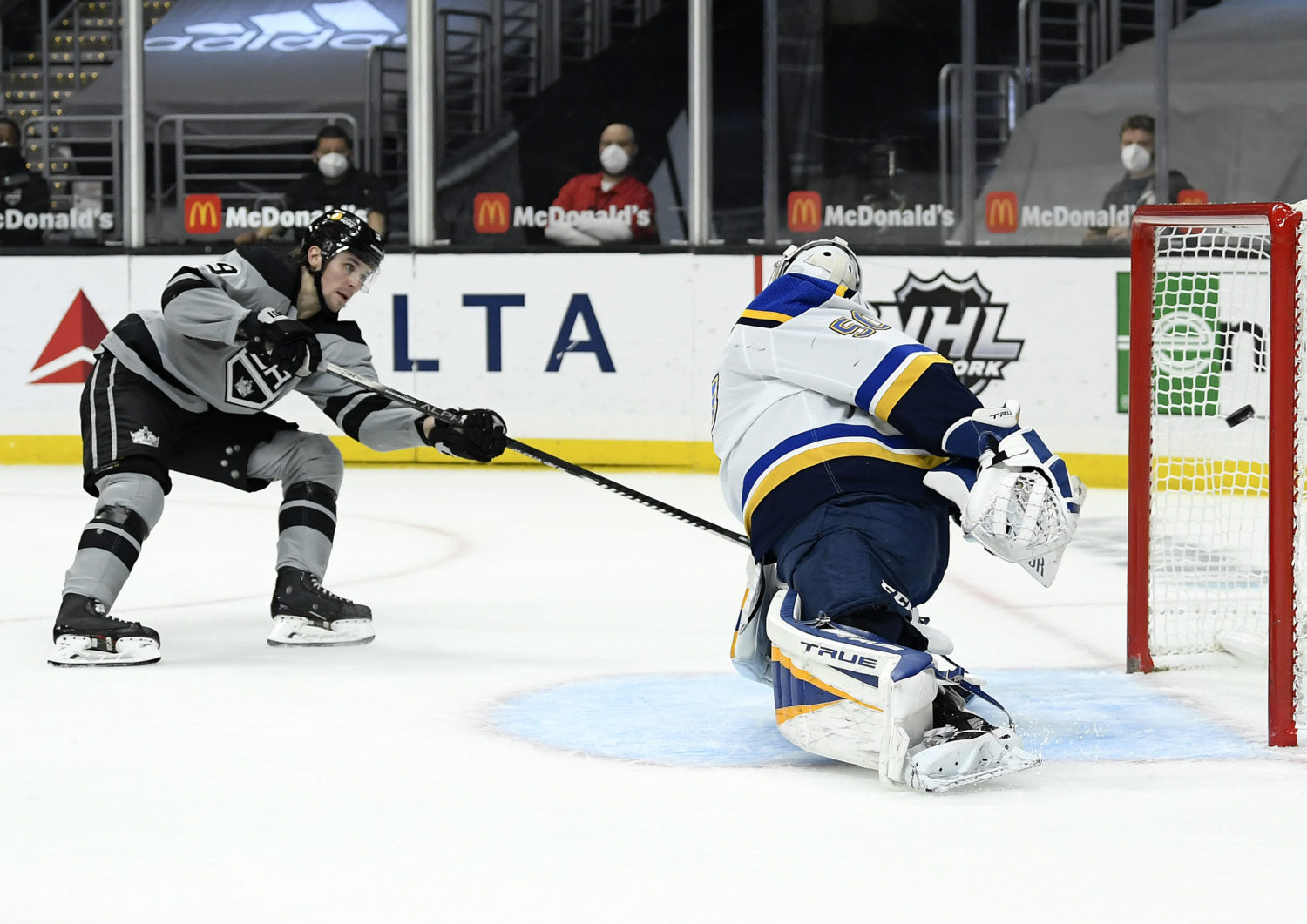 With the LA Kings down by three goals, after a start to the game featuring its share of breakdowns defensively, the team found itself in a position they’ve been in this season -trailing early on.

But then they got one back before the intermission. Then a power-play goal to bring them within one, and a late goal in the second period, shortly thereafter, to tie the game. The Kings have fought back from deficits several times so far this season, but what was different tonight was the closing touch, with Adrian Kempe putting home Gabriel Vilardi’s feed in overtime for a 4-3 victory. It marked the first time the Kings have overturned a three-goal deficit and won since 2014.

As Head Coach Todd McLellan said after the game, Kings changed their mentality tonight between the first and second periods, and it showed in the final 40 minutes with a much better looking, and much more successful spell of play for Los Angeles. The Kings stopped playing the game like it was a track meet and started playing their brand of hockey. The results were evident.

It all started with Anze Kopitar, who not only got the team on the board late in the first, but also scored the goal on the power play, and set up Matt Luff’s goal late in the second period. It was a textbook game for Kopitar, who has consistently played terrific, 200-foot hockey all season, and all throughout his career, and is now being rewarded offensively. The Kings’ captain is producing at a higher rate through 23 games than he has in any other season in his NHL career to date.

With how last night’s game went, and where the Kings find themselves positioned in the standings, a victory tonight felt rather important, and they were able to get the job done, in thrilling, come from behind fashion.

Hear from Kopitar, Kempe, Luff and McLellan after the victory.

On getting the power-play goal late in the second, and how it swung the game for the Kings
Yeah, I mean just the fact that they got a power-play goal in the first, as a power-play unit you want to match that just to bring the special teams to even. It gave us a chance to ultimately win the game.

On finishing off a comeback win tonight
If you look at yesterday and today, if you were a betting man, you’d probably have bet on us yesterday and not on us today. Hockey is sometimes a funny game, and we’re happy to be on top tonight.

On getting his goal tonight, and what it does for him as he gets back in the lineup
Anytime you can help contribute, especially in a comeback win like this, is huge. It speaks to our team’s character, being down what we were and coming back and winning. Any time I can get back in the lineup, help the team out and produce in any way, whether it’s just a solid couple of shifts here and there……just to get wins is nice when you’re in the lineup.

On finishing off tonight’s comeback
I just think it shows a lot about each guy in the room. It was a gut-check moment for us, and we proved throughout the second and third that we can do it. It speaks volumes about the leadership in our room. Kopi, just showing his night with three points, Dewy being so talkative and so helpful. Top to bottom, I think it was huge for us.

On his goal, and getting the feed from Kopitar
The funny thing was, when I gave it to him there, I was like I should go change for Brownie, and then something in my head was like just do a little button hook. There was a little bit of a hole, and luckily it worked out. Pretty cool to say Anze Kopitar assisted on one of my goals, when it’s all said and done. It was a huge goal.

On his overtime game-winning goal
[Vilardi] made a hell of a play in the d-zone, I think a couple of guys fell and we had a 3-on-1. I was just trying to stay open for him, be an option for him if he didn’t want to shoot it. He’s a hell of a player, and it was a great pass by him. It would be hard to miss that.

On the communication between him and Vilardi on that play
Coming up the ice, we were kind of talking, that we had a 3-on-1, 2-on-1, whatever you want to call it. After that, it’s just that he had the puck and made a hell of a play. It was a great pass by him.

On getting four unanswered goals and tonight’s win
I think, going back to the first period, we played well. We gave up a couple of goals early, but I think we were still in the game, had some good chances. Kopi got one there, late in the first period, that was huge for our team. Special teams were another big key tonight, the power-play needed one, we got one. All four lines were rolling and it was a good game, it was very nice to come back today to win after yesterday’s game.

Notes –
– The Kings overturned a three-goal deficit and won for the first time since December 18, 2014 against the Blues. The Kings have now come back from a multi-goal deficit to win twice this season, the other on January 21 versus Colorado.
– Anze Kopitar now has points in three straight games, his third streak of three games or longer so far this season. Kopitar tallied three points tonight, his second three-point game of the season.
– With 22 assists and 28 points on the season, Kopitar is now tied for fifth in assists and seventh in points across the NHL. He leads the West Division in both categories.
– With two assists tonight, forward Alex Iafallo collected his second multi-assist game of the season, and his third multi-point game in total.
– Forward Matt Luff scored his first goal of the season, with the game-tying tally late in the second period.
– Defenseman Mikey Anderson picked up his sixth assist of the season on Kopitar’s game-opening goal. Anderson ranks tied for fifth in assists amongst rookie defensemen in the NHL this season.
– Including tonight’s game, the Kings are tied for the second-best goal differential in the second period this season (+13), and are also tied for the NHL’s worst first-period goal differential (-15).

The Kings are scheduled for a full off day tomorrow. The team is then scheduled to return to the ice for morning skate on Monday, before facing off against the Anaheim Ducks at Honda Center later that night.