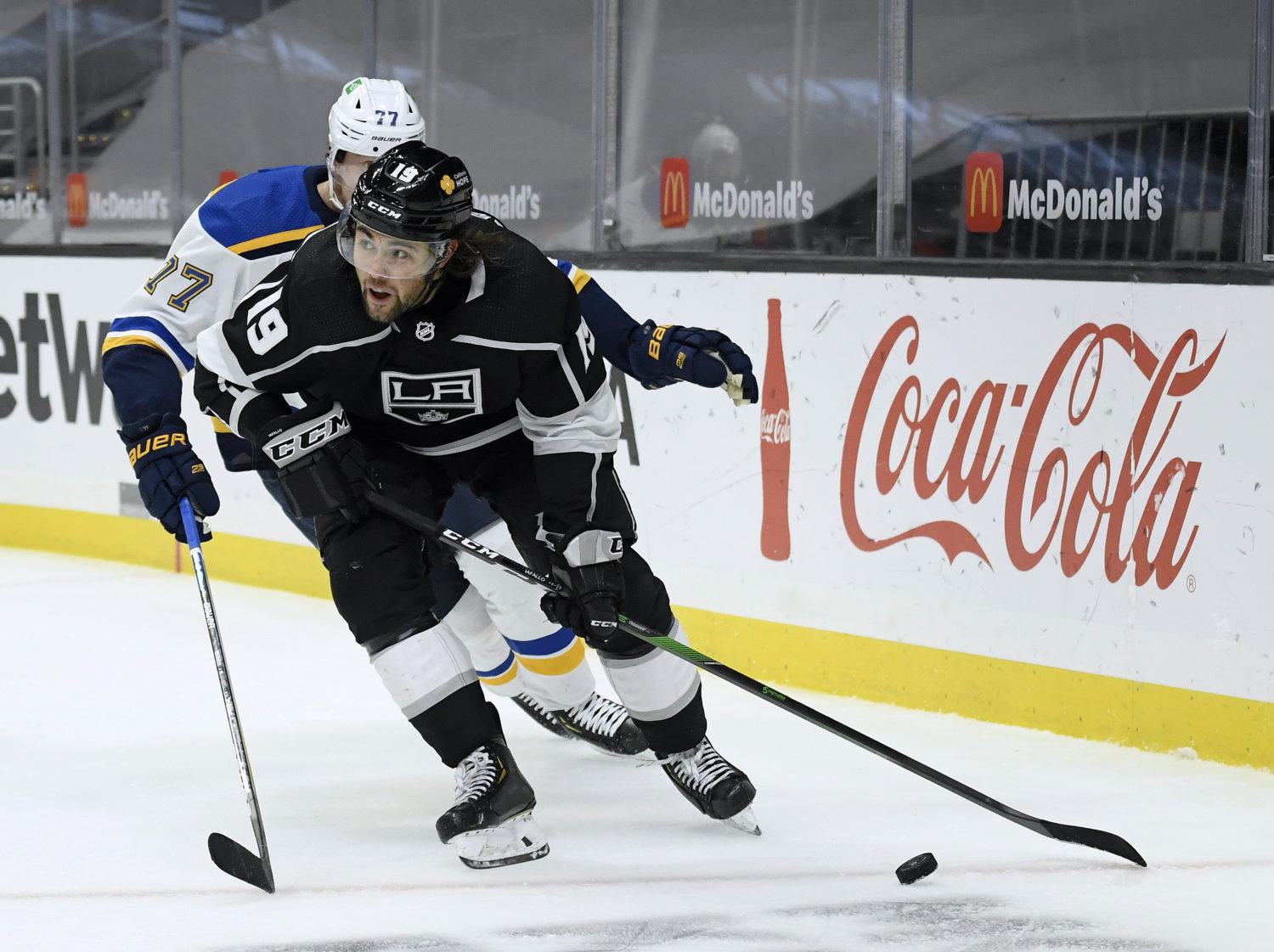 TONIGHT’S MATCHUP: The Kings have reached the final game of a short, three-game homestand, as they host the St. Louis Blues in a rematch of yesterday’s game. The Kings are 0-1-1 on the set to date, following yesterday’s 3-2 overtime defeat.

HEAD-TO-HEAD: Kings forward Dustin Brown continued his hot scoring pace against St. Louis this season, and in his career, with five goals from five games versus the Blues. Just three players in the NHL this season have more goals versus a single opponent than Brown versus St. Louis. With the primary assist on Brown’s goal, Anze Kopitar is a point-per-game player this season (1-4-5) against the Blues. With three assists last night, forward Ryan O’Reilly assumed the overall lead in head-to-head points with seven (1-6-7) from five games played. David Perron, who scored twice yesterday, leads all Blues skaters with three goals in head-to-head matchups.

KINGS VITALS: The Kings did not hold a morning skate this morning, considering the combination of the back-to-back and slightly earlier puck drop.

The team made two changes yesterday, inserting forwards Rasmus Kupari and Matt Luff into the lineup. Todd McLellan said after the game that, other than the too-many men penalty that the third line took, he was generally happy with the play of the bottom six and also indicated that Kupari would likely retain his place in today’s lineup.

“I thought that they found ways to contribute throughout the night, they played in the offensive zone, they didn’t give up many chances,” McLellan said of the bottom six last night. “Some of them were relied on to penalty kill, others were relied on, on the power play in certain situations. For the most part, we take out minute 3 and minute 59 and you’re leaving the rink fairly happy with the group as a whole.”

That being said, here’s the projection for this evening –

With Cal Petersen getting the nod last night, expect to see Jonathan Quick in net this evening at STAPLES Center. Quick posted a 31-save shutout in his most recent game against the Blues, and is 2-0-0 on the season, with a .952 save percentage and a 1.51 goals against average in head-to-head matchups.

In his NHL career, Quick is 11-15-3 versus St. Louis, with a .913 save percentage and a 2.52 goals against average, while his four career shutouts are his third most versus any one opponent.

BLUES VITALS: With backup goaltender Ville Husso getting the nod yesterday, the Blues will likely turn to starter Jordan Binnington this evening for the second game of the back-to-back. Binnington is tied for fifth in the NHL with 18 games played this season, and would move into a tie for third if he starts tonight.

In his NHL career, Binnington is 3-3-0 against the Kings, with a .922 save percentage and a 2.24 goals against average. The Richmond Hill, ONT native is 1-2-0 on the season from three prior starts versus Los Angeles.

The Blues are not expected to hold a morning skate today. Here’s how St. Louis lined up last night –

The expectation, however, is that the Blues will make at least one roster move from last night. Jeremy Rutherford of The Athletic reported that forward Vladimir Tarasenko is expected to return to the lineup tonight and make his season debut for the Blues. Tarasenko was limited to just ten regular-season games last year, due to a shoulder injury he suffered early in the season, and also appeared in five games in the Edmonton bubble over the summer.

Tarasenko, at his best, is one of the top goal scorers in the NHL. From 2014 – 2019, Tarasenko’s last five healthy seasons, the list of players with more goals than the Yaroslavl, Russia native is two names long: Alex Ovechkin and John Tavares. If you count playoff goals, it’s simply Ovechkin who sits above Tarasenko at the top of the league leaders. Not a bad guy to insert into your lineup midway through the season.

Learning A Painful Lesson
Dustin Brown has seen his fair share of outcomes.

When you’ve played more than 1,200 NHL games, you’ve been a part of just about everything at this level. So, he’s a respected voice in most areas, including when discussing a game like last night.

The Kings played pretty well for the bulk of the game – McLellan estimated it at 58 minutes and 30 seconds – but it was a couple of mistakes that loomed large in the other 90 seconds, resulting in the St. Louis victory.

“I thought we played a really good game, actually,” Brown said yesterday. “We had a lot of really good chances, just didn’t find the back of the net as much as we would have liked. To give up a goal late, it’s a hockey game, stuff like that happens. I think it’s a good lesson for us as a group. On the six-game winning streak, maybe we squeaked out a couple games where the bounces went our way. This is a good lesson to learn that you have to play a full 60 to get out of this little skid we’re in. Lot of good things to take from the game, but it was a frustrating loss.”

McLellan seemed to echo those sentiments. He mentioned a few times in yesterday’s post-game availability that he was happy with the bulk of last night’s game, but also discussed the late lead blown, and how it’s not the first time this season the Kings have given up a lead late in regulation.

“We’ve got to fix some things, and we can’t take two steps forward and one step back,” he said. “We’ve been in this situation numerous times, where we’ve had leads, and even with pulled goaltenders we’ve given up opportunities to win games. When it’s all said and done, we’ll look back at it and we’ll likely regret it, but it’s part of the process, part of growing.”

Dynamic Duo
Speaking of Brown, he and longtime teammate and linemate Anze Kopitar moved atop a leaguewide list yesterday.

With Chicago Blackhawks defenseman Brett Seabrook announcing his retirement, the NHL leaders for games played together as teammates are now Brown and Kopitar at 1,067. The duo were just two games behind Seabrook and Duncan Keith, and would have likely passed them this coming week regardless, but it’s a testament to all of the many forms of ability – ability, durability and availability.

Brown and Kopitar seem to that unspoken connection on the ice. On their goal yesterday, Brown mentioned after the game that as soon as he got the puck in the offensive zone, both players knew what was coming. The result was a give-and-go, with a thread the needle pass from Kopitar, and a goal from just outside the blue paint from Brown. Clockwork.

“I picked the pass off on the clearing attempt, and I gave it to [Kopitar], and when we got back to the bench we both kind of chuckled,” Brown said. “As soon as I gave him the puck, I think we both knew what was going to happen. That’s the benefit of playing with one guy, and clicking with a guy for the last however many years, we knew what was going to happen before it happened.”

The statistic is what it is, but it really says a lot that of the 1,095 NHL games Kopitar has played in his NHL career, Brown has been in the lineup for all but 28 of them. A remarkable show of durability for a player who plays a hard style of hockey.

“It’s one of those things where you don’t really think about it until you think about it,” he said after the game. “I played two years before he did, and I remember chipping the puck off the glass in Anaheim for a goal, where he walked around Pronger and danced Giguere. Ever since that day, it’s pretty evident that he’s a really good player and I’m just glad I got to play with him for so many years.”

Both players are in the midst of career years of sorts as well, despite their advanced age. Per LA Kings PR, Brown is currently scoring at the highest rate of his NHL career on a per-game basis for both goals and assists, while Kopitar’s assists and points rates, per-game, are also the best of his career.

It’s still a small sample size at this stage, we’re not even halfway through what is already a shortened season, but it’s safe to say that the veteran forwards still have much to give as they extend their league-leading statistic.

Another @LAKings game and of course @AnzeKopitar and @DustinBrown23 are in the lineup. #NHLStats pic.twitter.com/wjg9JA7zRE

Game Thread is next!

By Zach Dooley
861 Comments
Behind the Scenes