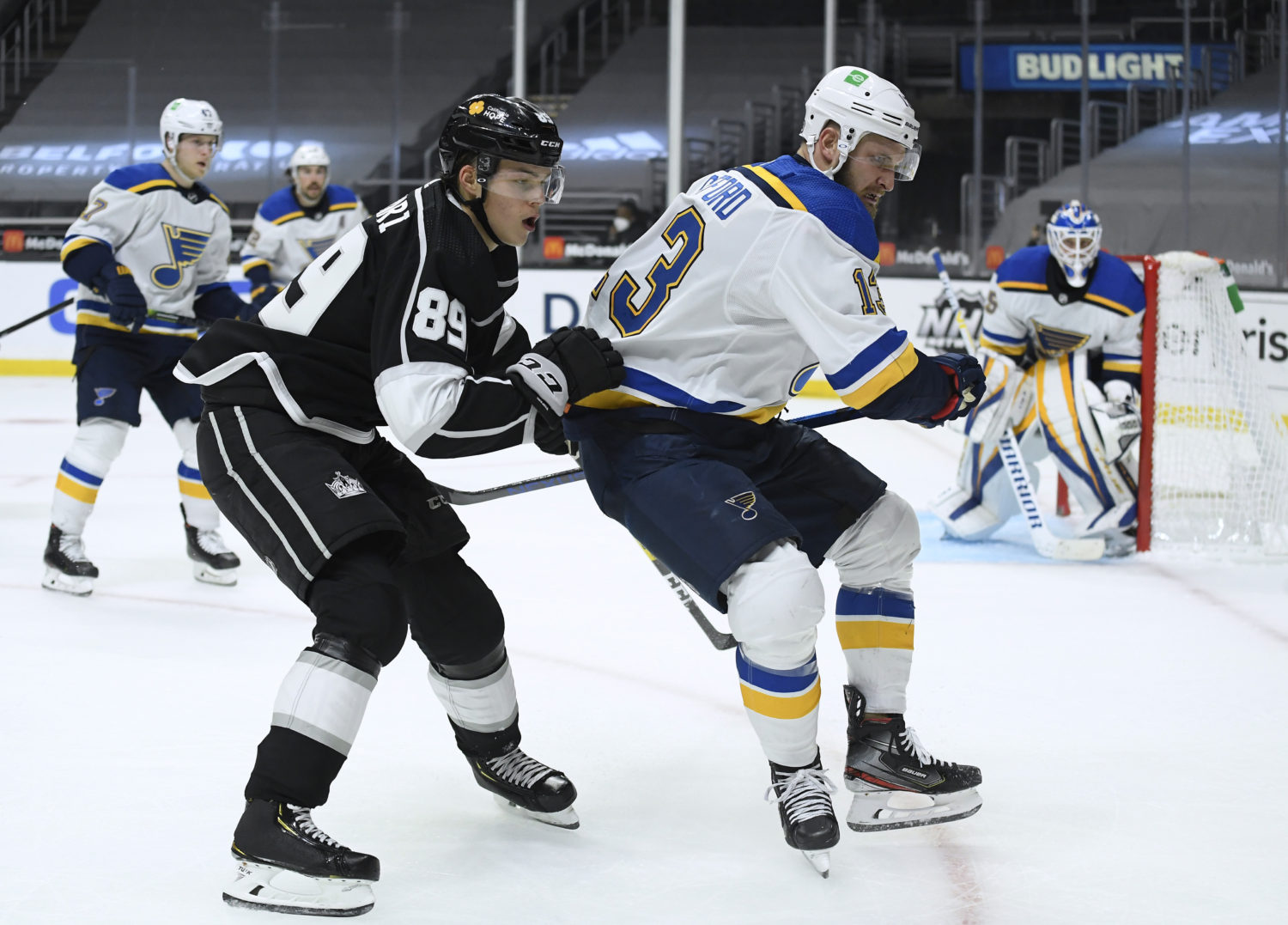 In the words of their head coach, the LA Kings put together a strong 58 minutes and 30 seconds, but it was the other minute and a half that cost them in a 3-2 overtime defeat against the St. Louis Blues.

Early in the game, the Kings took a too-many men on the ice penalty, that wound up in the back of their net on the resulting power play. What followed felt like a pretty great game played by the Kings, until we reached the final 60 seconds.

The Kings chased an empty-net goal too aggressively as the clock wound down, which led to a 3-on-2 rush for the Blues the other way. Given space, forward David Perron sniped home his second goal of the game from the top of the right-hand circle to force overtime. St. Louis capped things off with a 4-on-3 goal in overtime, with a delayed penalty coming against Los Angeles.

In between those two moments at either end of the game was some very good hockey from the Kings. They got a nice goal from Jeff Carter and a power-play tally from Dustin Brown, in his typical, around-the-net fashion. They certainly had several opportunities to put the game away with a third goal, but couldn’t get another one to go past Ville Husso.

Overall, the Kings did a lot of things well tonight, and put together what was nearly a complete 60 minutes, but between the two moments that Todd McLellan was most disappointed in tonight, and just not being able to get that insurance marker in the third period, they were on the wrong side of another overtime game, falling to 1-5 games that extend past the scheduled 60 minutes.

Hear from Brown, Rasmus Kupari and McLellan after tonight’s game.

On making his NHL debut tonight, and how he felt in his first game with the Kings
Unfortunately we lost, but I think there were a lot of good things with our line and with the whole team, we got some chances. I just tried to keep it simple, use my speed and get the forecheck going. I thought that when our line did that, we got some pretty good chances a couple of times, and I’m pretty sure next game we’ll score on those.

On the biggest differences or adjustments to make between the AHL and NHL
Of course, the game is a little faster, but I think it’s more organized here. Guys are smarter, more skilled, so I think that can be a good thing for me as well. It helped my game.

On if anyone on the team was especially encouraging for him before his debut
I think the whole team said congrats to me and they helped me through this day. On the ice, I had to say that the whole team, lots of different guys, I’m really thankful for the whole team and coaching staff.

On taking the solo lap before tonight’s game
Yeah, I had a lot of fun. It was a moment I will never forget. I was in line there, and Kopi just told me to go ahead, and I got a couple laps by myself. It was totally something that I will remember for the rest of my life.

On if he felt the team chased the empty-net goal too aggressively, leading to the Blues game-tying goal
One-hundred percent, I couldn’t say it better myself.

On the two moments that cost the Kings the game tonight
When I look at the game, I think of the too-many men on the ice penalty right off the bat. The line that took the penalty hadn’t even been on the ice yet and that’s unacceptable. You’ve got to know who you’re going for and when to go. We had a couple of those early in the year and it hurt us. At the back end of the game, the last minute, we chased that empty netter and we didn’t need to. We needed one to be aggressive, two maybe to help and three to be safe, and we weren’t that. You take those two moments out of the game and I thought we played a pretty good night.

On the message to the group between games
We’ll do what we always do. We’ll look at the video, we’ll try to fix things that need to be fixed, whether it’s individually or collectively. Even the penalty to start the game with, there’s not much we can do or say to that individual right now, he knows it, he feels really bad about it, let’s just make sure it doesn’t happen again. To me, it’s just not being sharp. Again, it’s unacceptable, but it’s a team game and guys make mistakes in a team game. Everybody pays for them, but that’s what we signed up for. We get better as we move forward.

On if tonight feels like a “bad point”
I have to be careful how I answer that, because 58 and a half minutes were pretty darn good. There’s still mistakes, but we couldn’t be happier with that part of the game. To let it get away in the other minutes the way that it did is disappointing. I don’t know what the most important minute of the game is, you usually don’t know until after. Was it the too many men on the ice penalty that they scored on? Maybe. Was it the 6-on-5 goal? Maybe. Overtime is overtime, but those are two moments that standout.

On Rasmus Kupari’s NHL debut tonight
Pretty solid night. A little nervous to begin with, but who wouldn’t be, and then he settled in. He was good in the circle, he was responsible in his own end, I thought he forechecked, he had a couple of scoring opportunities, that’s a pretty good night for a 20-year-old to have in his first one.

– With his 12th goal of the season, forward Dustin Brown moved into a tie for fifth in the NHL in goals scored this season. Brown also leads all players in the West Division in goals.
– Anze Kopitar collected the lone assist on Brown’s goal, his 21st of the season, moving him into a tie of his own for fifth in the league. Kopitar leads all players in the West Division in assists and points this season.
– With the primary assist on Jeff Carter’s second-period goal, forward Andreas Athanasiou now has points in four of his last five games (1-3-4).
– The Kings have earned at least one point (3-0-3) in each of Cal Petersen’s last six starts.
– Forward Rasmus Kupari made his NHL debut tonight, skating 10:07, as he became the third Kings player this season to make his NHL debut.
– The Kings tied a season-low for shots allowed (22) tonight, matching the 22 they allowed on February 18 in Arizona. The 22 shots allowed were also the fewest they have allowed in a game this season at home.
– The Kings have now scored a power-play goal in three consecutive games, with four goals in total during that stretch.

The Kings and Blues are scheduled for a rematch tomorrow evening at STAPLES Center, with puck drop again slated for 6 PM.