Mikey Anderson continues to make waves in an elevated role 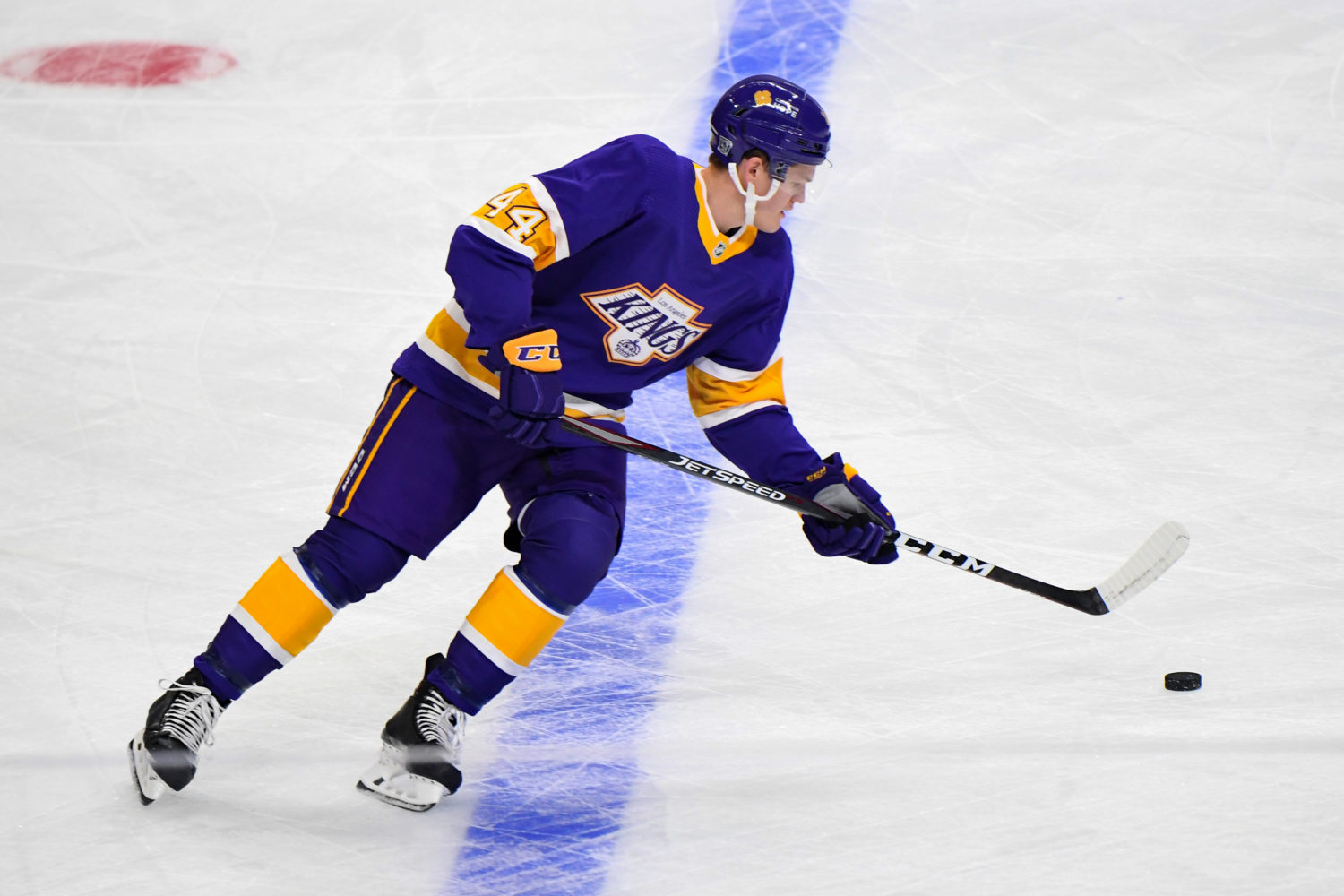 It’s never easy to ask a young player to step alongside Drew Doughty. In asking Mikey Anderson to do so, however, it’s provided an opportunity.

“It’s an opportunity – Everyone wants an opportunity, and when you get it, you’re just trying to make the most of it and stick, show what you can do,” Anderson said. “Obviously, it was a little nerve-wracking right away, but I feel like I’ve handled it well and [Drew’s] done a good job of staying patient with me on a couple of things. He talks a lot and makes it an easy adjustment for me.”

In just his tenth career game with the Kings, Anderson earned a mid-game bump to the top pairing, as his play was one of the factors behind a comeback win over Colorado. Ten games prior, dating back to February 2020, and he was defending players in the American Hockey League. Fast forward, and Anderson is lining up against Nathan MacKinnon, Mikko Rantanen and Gabriel Landeskog, one of the best forward lines in the world.

It’s certainly been a quick transition for Anderson, but that doesn’t mean it’s been an unsuccessful one. Off the rip, this was a test for a young player from his coaches. It’s still the first semester of the school year, we haven’t even taken the midterm exam yet, but so far, Anderson is passing the course.

The Doughty element is obviously key.

Playing top pairing minutes gets a bit easier when your defensive partner is one of the best blueliners in the league. Having Doughty specifically as his partner is something that Anderson knows is helping him out.

Doughty has routinely been among the NHL leaders in ice time on a year-to-year basis. He’s not playing easy minutes, either. Doughty is tasked with defending the other team’s best players on most nights and is a factor on the penalty kill as well. Having such an established partner, with that level of experience, has aided in the transition for the Roseville, MN native.

“Obviously it can be a challenge, some nights might not go your way like the others will,” Anderson said. “Drew’s a great player and he makes those minutes a little bit easier. He’s always in the right spot, which helps me out, and I try to do the same for him.”

In Anderson, Doughty sees a player who has fit alongside him well thus far.

Often, when you have a younger player slotted in alongside an established veteran, in this case a former Norris Trophy winner, there can be nerves associated with it. Doughty was paired with veteran blueliners Sean O’Donnell and Rob Scuderi early in his career and knows that feeling for sure.

He talked this week about when he was in that role, how he was worried that the veterans he played with wouldn’t think he was a good enough player to be their partner. Imagine that, Drew Doughty not being good enough.

He felt that, at times, he had to impress them when he was on the ice, and that’s something he had to work through. Now, as the established veteran himself, Doughty sees that in younger players stepping in as his partner. He feels he’s done everything he can to make Anderson more comfortable, and the duo is reaping the rewards. 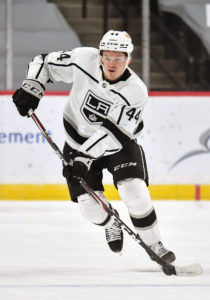 “I think young guys do that when they start playing with me,” Doughty said. “To them, they watched me playing growing up, it’s going to be a little bit intimidating the first couple of games, and now [Anderson’s] just comfortable. I did everything I could to help make him comfortable, and we’re just on the same page. When you get more games under your belt, you’re able to talk about the things you did wrong and the things you did right. That’s just made us better together.”

Communication has been a huge element to the success that the pairing has had. Anderson has constantly praised Doughty’s communication skills on the ice.

It’s something that we’ve heard Olli Maatta speak about as well. Doughty’s always talking out there, and that makes things easier for the guy he’s playing with.

“He’s a guy that talks a lot on the ice, whether it’s on the bench or literally on the ice,” Anderson said. “He’s always talking about a play, something he could have done different, something I should have done, and as a young guy, that goes a long way, makes me feel comfortable. It allows us to grow together as a pairing, make more plays.”

It can be intimidating for a younger player to communicate openly with such an established veteran like Doughty. To get that type of feedback from a 21-year-old player has been something that Doughty has loved to see, and has benefitted from himself as well.

As he continues to navigate his first full NHL season, the spotlight on Anderson will not grow dimmer.

The Minnesota-Duluth alum was touted as one of the top rookies in the West Division in a recent NHL.com awards summary, which gave Anderson a couple of votes as a Top-3 first-year player. For a defenseman who has taken care of his own zone first, there’s something to be said for that.

Then there’s the ice time. Anderson played an NHL career-high 25:07 on Saturday against Minnesota and has logged enormous minutes throughout the season as Doughty’s partner. At 21:37 per game, Anderson leads all rookie skaters in time-on-ice per game, as one of just two first-year players averaging more than 20 minutes each night. There’s still a long way to go, but Anderson’s current totals would rank inside the Top-10 for first-year defensemen over the last five years.

It’s nearly 22 difficult minutes per night too, and as he continues to work his way around the NHL, Anderson’s familiarity with the league’s top players will only improve.

“He seems to understand the other team’s top lines right now, and he’s been through the batting order once if you will, has a good idea of what to expect from the other teams, and he’s been able to defend well,” McLellan said. “I think, eventually, there will be a little more offense to him too, but right now we’re happy with where he’s at.”

As his head coach alluded to, it’s been defense first for Anderson so far, but that’s not to say he doesn’t have offensive abilities.

Watch the poise by Mikey Anderson, and him getting the puck across while getting tripped. https://t.co/UOfPNRn8px

His assist, seen above, in Arizona shows immense poise and passing ability to get that puck into a dangerous area on the ice, leading to a shorthanded goal against. That’s not a play that someone who is strictly a stay-at-home defenseman would make, especially on the penalty kill. He had the confidence to jump into the rush, and make a skill play short a man.

The more he’s able to do that, the more comfortable he gets, and the more his confidence grows, the more we’ll see Anderson produce.

“I’m trying to get more comfortable, day in and day out, and over time keep getting my confidence up, make more plays, just being able to contribute a little bit more offensively as we go forward” 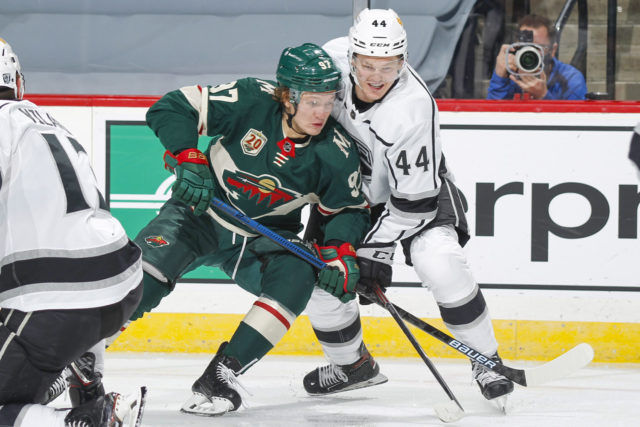