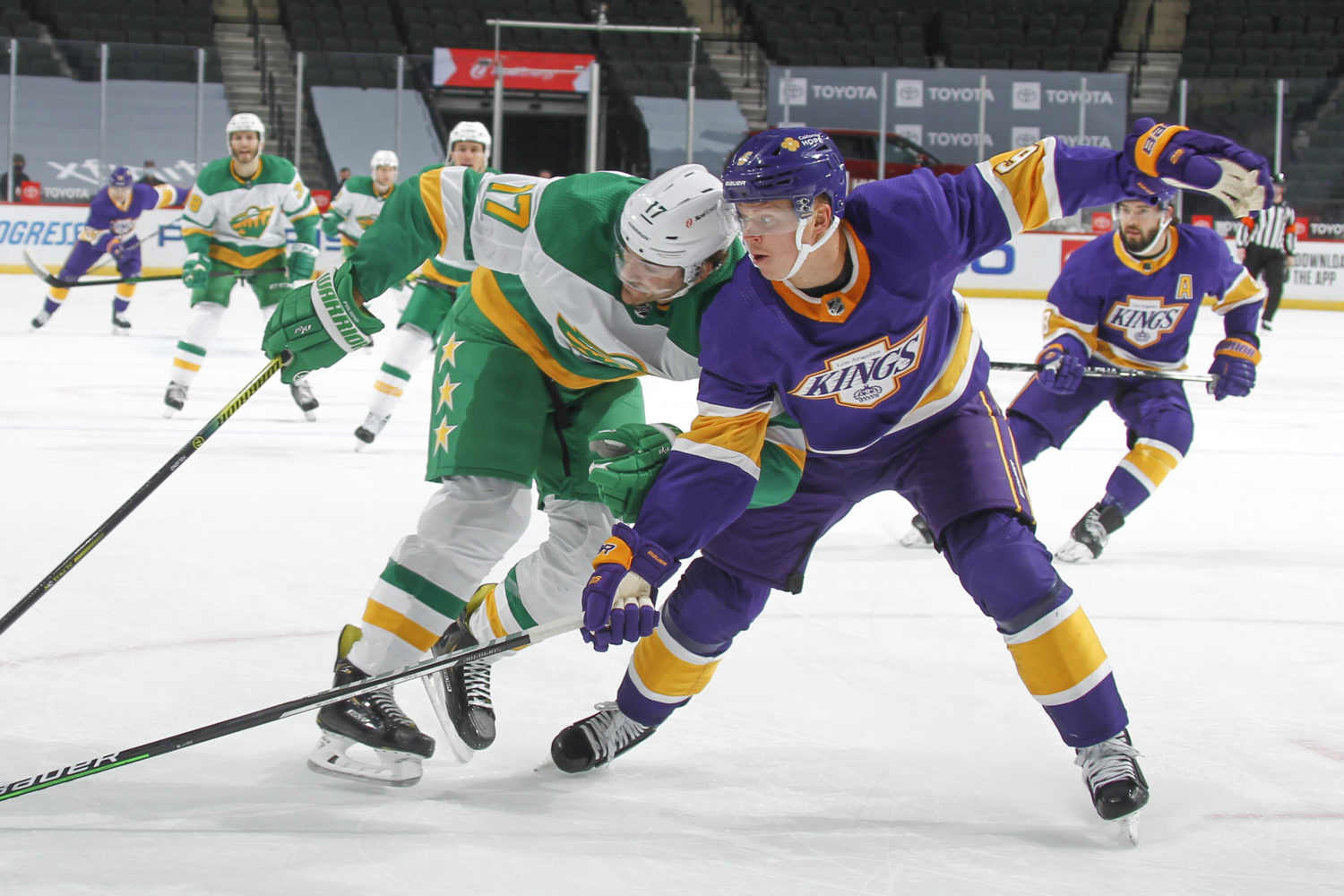 For the second straight game, the LA Kings were staring down a 3-0 deficit in the first half of the game. Unlike last night, a game that ended in a 3-1 defeat, the Kings rewrote the script, with three goals to tie the game and force overtime. Los Angeles had its chances in overtime to earn the bonus point, and killed off a 4-on-3 power play against, but conceded a goal to Matt Dumba with 0.3 seconds left on the clock, falling 4-3.

After Minnesota scored the game’s first three goals, the Kings got on the board through defenseman Drew Doughty, who converted a one-timer on the power play. Austin Wagner followed it up with a breakaway goal, after he blocked a shot in his own end, took the puck the length of the ice and beat Kaapo Kahkonen on the blocker side to make it 3-2.

The Kings converted again on the man advantage late in the third period to complete the comeback, as Adrian Kempe got the team’s second power-play goal of the game to tie things up at three, forcing the extra session. Kempe, who Todd McLellan said yesterday he needed more from offensively, responded well with a goal, an assist and a team-best five shots on goal.

Kempe nearly set up the game-winning goal in overtime as well – his feed to Matt Roy was deflected just wide – and though the Kings were successful in killing off a 4-on-3 power play against, it was not enough to earn the bonus point. Dumba put home the game-winning goal with less than a second to play to prevent a shootout, and give Minnesota its sixth consecutive victory.

The Kings now return home after they completed their longest road trip of the season, six games, at 4-1-1 total, earning nine of a possible 12 points.

Hear from Kempe and McLellan after tonight’s game.

On if he was happy with the way the Kings fought back to earn a point
Of course we were. We’re disappointed that we got into that hole again, but the team, to a man, stuck with it and clawed way back in it, right to the last second. It’s a good sign for our group. It’s not a good sign that we’re falling behind right now, we’ve got some things ahead of us that we have to work on. I’m looking forward to some of the practice time that is upcoming, because we haven’t had a lot of it on the road. We probably earned a point tonight, and a loss too, so we got what we likely deserved.

On if he was pleased Adrian Kempe’s play tonight
I was, he made a different in the game tonight, he looked like a hungrier player. He’s such an important player for us, he’s a really good player, he does so many things well. Penalty kill, power play, he can be physical, he can skate. When all of those things are showing up in the game, he’s a force and he’s a tough player to handle. When a few of them are missing, he just becomes average, and when a lot of them are missing, we’re short a player. There haven’t been many of those games, but sometimes a gentle reminder that where you’re taking your shots from and the shot volume is disappearing a little bit. We reminded him of that, and as I thought he would, he responded quite well.

On the improvements on special teams from yesterday, and the goals allowed
Well, the power play was better tonight, obviously getting two, it wasn’t easy. They’re an elite penalty-kill team, they’re at the top of the league for a reason. They get good goaltending and their pinch points are really strong, so they made us earn it. We were lacksidaisical yesterday, we got their attention and we played with a little more zip and detail today, but by no means was it easy. Kempe’s goal was a quarter shot, it was a missed shot that is a change up, it’s hard for goaltenders to stop that. For me, it was a night of strange goals. If you look at their first one, everybody’s in position, it bounces off a linesman, bounces into the middle, we chop at it with a stick, it flutters up in the air, it’s a change up, it goes over the top of everybody into the net. The broken stick goal, the d-man shoots it and it goes right to Kaprizov. Everybody pauses for a second because no one knows where the puck is. Just a strange night when it comes to goals.

On if he held his breath when Mikey Anderson took that hit, considering his injury
You hold your breath for anybody in that case, whether it’s one of our players or their players, nobody wants to see that happen. Fortunately for Mikey, he responded real well and he gave us real good minutes tonight. It was great to have him back in there.

– Forwards Adrian Kempe (1-1-2) and Anze Kopitar (0-2-2), as well as defenseman Drew Doughty (1-1-2), each collected multiple points in tonight’s overtime defeat.
– For Kopitar, he picked up his 18th and 19th assists of the season, moving him into a tie for fifth across the NHL. Kopitar leads all players in the West Division in both assists (19) and points (23) on the season.
– Doughty moved into a tie for fourth in the league in goals by a defensemen, and into sole possession of sixth in the league in points by a defenseman with 17 on the season (5-12-17). Doughty also leads all blueliners in the West Division in points.
– Cal Petersen faced 42 shots tonight, tied for a season-high, and made 38 saves, his second highest total of the season. Petersen is unbeaten in regulation over his last five starts (3-0-2).
– The Kings gave up two goals in tonight’s first period and have been outscored 8-0 in first periods this season at Xcel Energy Center.

The LA Kings will travel back to Southern California tonight, and will not practice tomorrow on a full-team off day.