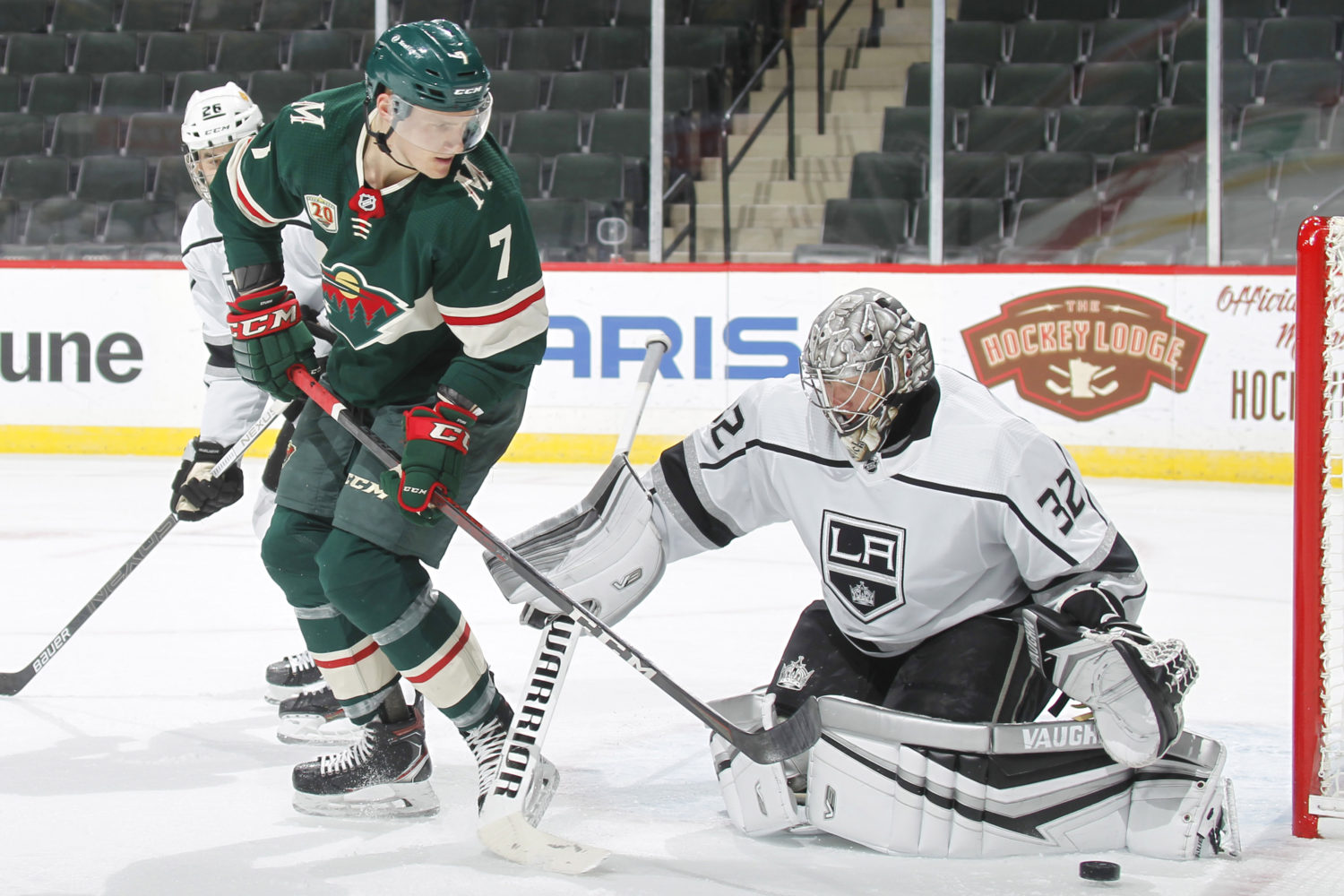 The LA Kings were unable to push their winning streak to seven games, as they fell by a 3-1 margin against the Minnesota Wild on Friday evening at Xcel Energy Center. Minnesota scored three goals in a span of just over three minutes midway through the first period to open up a lead that the Kings could not overturn throughout the remainder of the game.

Los Angeles finally did break through with a goal late in the third period, a nice passing play finished by Jeff Carter, but could not get any closer.

Though the start to the game wasn’t necessarily a problem, Todd McLellan felt that the team came undone after the Wild got the first goal of the game, which quickly spiraled into two additional Minnesota goals. By the time the Kings caught their breath and stopped the bleeding, much of the game had already passed and they were staring down a three-goal deficit that was ultimately too much to overcome.

Outside of that stretch in the opening frame, the Kings did have some chances, but a lack of sharpness was present throughout the evening. In net, Jonathan Quick made 27 saves to keep the team in it, and it would be difficult to put too much fault at the hands of the goaltender tonight.

The Kings will get another crack at the Wild less than 24 hours from now, with a back-to-back set. The rematch is scheduled for 7 PM tomorrow evening in St. Paul.

Hear from Petersen and Todd McLellan after tonight’s game.

On what went wrong in the stretch when Minnesota scored three goals
There was a lot of stuff that didn’t go the way we wanted it to go, and it’s all on us. We didn’t any plays, our passing was not very good and just battles for the puck, they won them. They played in our zone the whole time and scored the goals.

On the chance to get a quick rematch against Minnesota
The last two periods were better – still not up to our standards – but better. We stopped the bleeding a little bit and tomorrow’s a new game. We’re going to have to be much better than we were tonight.

On what the team did to stop the bleeding, and improve throughout the game
Just make better plays. Passing the puck on the tape, making sure we don’t lose coverage, playing less in our zone, and obviously not giving up the goals. It’s going to have to be better, it’s going to take a better effort, and a better job, on our part tomorrow night.

On the team generating some offense in the final 40 minutes
Like I said, from Arizona on, we didn’t make enough plays to put ourselves in a position where we can sustain possession in the offensive zone and get the second and third chances, spend more time there.

On what it was that tilted the ice Minnesota’s way during that three-goal stretch
Well, we didn’t respond after the first one. They earned it, they created an opportunity, they made a good play behind the net and it was in, but life goes on. We haven’t had that feeling of falling behind in a long time, and I didn’t think we responded well. We had a three-minute lapse, misplayed one off the endboards for the second one and the third one was just a mess in our zone. It took us the rest of that period and pretty much all of the second period to stabilize in the game. I just think our game was getting a little sick in St. Louis, I think I mentioned that after playing there, that our puck decisions weren’t very good. We didn’t handle pucks real well when they were on our tape. Often, I think your power play is an indicator of that, and ours really let us down tonight I thought. From a momentum perspective and an execution sense of quickness, being in command, we didn’t have that.

On moving Athanasiou up with Vilardi and Carter midway through the game
I thought Athanasiou was one guy who had some legs tonight. Some of our top guys looked a little sluggish, but I thought he had legs and he was around the puck so we bumped him up a bit. Kempe went down with the other line, he’s a guy that we’ve got to get going, I think he has one goal in the last 14 games. He’s such an important player for us, so we’ve got to get him back producing, just so he can take some of the pressure off of some of the other guys,

On making adjustments for tomorrow, and how he expects the team to show up tomorrow
Well, I guess it’s important how I expect them to show up, but it’s even more important how they expect each other to show up. Let’s face it, we’re not going to hockey school tonight, we’re not doing anything miraculous that’s going to make us a better team in the next 15-16 hours. We know what’s ahead of us and we just have to play a better game. We have to execute when we get the opportunities and just play a better game than we did tonight. We’ll try to help them, video-wise, give them a few pointers if we can but not much is going to change between now and then.

On the message for tomorrow, entering the rematch
We’re going to do what we always do. The players are going to get some rest, the coaches are going to look at the game. If there’s a way that we as a staff can help them, tactically or systematically to put them in better spots then we’re going to do that. It often falls off at the end of a road trip. It’s not an excuse at all, I’m not buying it one bit and I’m not going to let the players buy it, but our details in St. Louis weren’t real good and it carried over into tonight’s game. When do we get them back, how quick do we get them back, to the point when they become real important again. That’s what we’ll be looking for tomorrow.

– Forward Jeff Carter collected his seventh point in the season series against Minnesota with the team’s lone goal tonight. With two goals and five assists from six games this season, Carter leads all scorers on both sides. The veteran forward also has points in six of his last seven games in total.
– With the primary assist on Carter’s goal, forward Andreas Athanasiou now has points in back-to-back games (1-1-2).
– With an assist on Carter’s goal, forward Gabriel Vilardi moved into a tie for sixth in the NHL amongst first-year players with nine points (5-4-9) on the season
– After allowing just two first-period goals over their last six games, all victories, the Kings conceded three goals tonight, in a span of 3:03.
– The Kings six-game winning streak came to a close, tied for the longest winning streak by any team in the NHL this season.

The Kings are not scheduled to hold a morning skate tomorrow and will return to action tomorrow evening at 7 PM, in a rematch at Xcel Energy Center.