Off to his best ever goal-scoring start, Dustin Brown continues to produce for Kings - LA Kings Insider

Off to his best ever goal-scoring start, Dustin Brown continues to produce for Kings

The last time Dustin Brown had 11 goals from his first 18 games played in a season, he was 19 years old. His jersey had the emblem of a fierce lion with a crown on the front, as he played in his only AHL season with the Manchester Monarchs during the NHL lockout in 2004-05.

In his first 16 seasons in the National Hockey League, Brown has never gotten off to a start like this.

No player in the West Division has more goals than Brown’s 11, which ranks as the fifth highest across the league. While seeing his name alongside those of Auston Matthews and Connor McDavid in the NHL’s goal-scoring leaders certainly wasn’t the expectation, it also hasn’t been that surprising to his longtime centerman Anze Kopitar.

The two have played together for the better part of their NHL careers, and Kopitar pointed to the way Brown plays the game, and his nose for the net, as reasons to why he’s been successful so far this season. 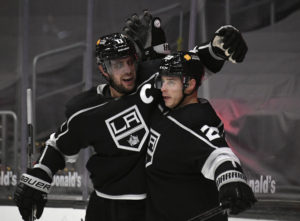 The Kopitar – Brown pairing, joined over the last few years on a consistent basis by winger Alex Iafallo, has been at the crux of the Kings surge up the divisional standings this season. Over the years, the pairing has developed a sixth sense of sorts, knowing where the other is on the ice, allowing them to make plays others don’t.

“Me and Kopi have that connection for whatever reason, we’ve played together since the get-go and we’ve kind of hit it off from Day 1,” Brown said. “What makes me and him work, is I know where to go. Some coaches have always wanted me to get closer to Kopi, but we both know that when he has full control, he wants me to find space for him, away from him.”

Take Brown’s goal in Arizona for example. Kopitar had the puck along the left-wing boards and drew two defensemen to him. Rather than eagerly jump into the play, Brown kept his distance and took a pinpoint dish from Kopitar in space, which created a prime scoring opportunity. Brown then made a nice move, in-tight, for the goal.

It’s been that area of the ice, in-tight, where Brown has thrived so far this season.

Number 23 in black and white has owned the front of the net in first third of this season. Brown has scored nine of his 11 goals in or around the blue paint, and he’s found a variety of ways in which to do it.

There have been the highlight-reel tallies – his goal and Arizona, and his silky-smooth deke in St. Louis on Monday. There have also been the gritty goals, including banks off of defensemen, shots off of legs and pitching-wedge level chips, such as his power-play goal against San Jose earlier this month.

The common theme, however, has been Brown’s presence around the net.

“Minus the empty netter, I haven’t scored a goal outside of what, ten feet of the net,” Brown said after Monday’s win. “Getting there a lot more, more often and earlier in the shifts. I’m fresher so I can get there and battle and getting to the net has been a staple of my game. Just getting there more often this year.”

It’s not as if Brown hasn’t gone to the net across his storied career, so what has been the difference in his age-36 campaign?

For starters, he’s no longer killing penalties and that has freed him some of his energy to commit to his play at even strength and on the power play.

“Part of it is, I’m fresher on the offensive side of the puck, I haven’t killed [penalties] starting maybe the middle of last year I stopped killing,” he said. “That’s not only a lot of minutes but minutes that are quite honestly hard and exhausting minutes to do, so maybe I’m a little bit fresher.”

Giving things up isn’t always easy for a veteran player, especially in this instance where it has been a key part of what Brown has offered throughout his entire career. 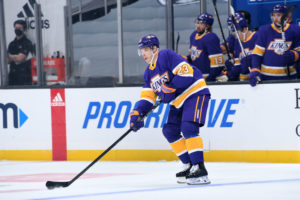 His Head Coach understands that dynamic.

Todd McLellan discussed the situation, acknowledging that it’s not always easy to take a player like Brown off of the penalty kill, where he’s always been, but feels that his veteran winger has been better for it. He’s noticed more “pop” in Brown’s legs, which has led to increased offensive output.

“It might sound strange, but we actually took some things away from him, which is never easy as a veteran player, and as a result, I think he has more pop in his legs,” McLellan said. “Would he like to be out there? Of course he would, but he’s got more pop in his legs and he seems to get more done without it, so good for him.”

There’s also the thought that you get smarter as you age, and that seems to be the case for Brown.

He’s pointed to other players he’s watched throughout his career as guys who have learned to think the game better, which has helped them to age more gracefully. He acknowledged that you do slow down a bit as you get older but getting smarter alongside it has allowed him to keep up, and in many ways improve, his level of play.

“I think there is [something to that],” Brown said. “You look at some of the older players who have played in the league for a while, they might slow down a little bit, but thinking the game is a huge part of it at this level. You just get better when you’re paying attention, and I feel I think the game a lot better than I did when I started, I think each year I’ve tried to get better. That’s the key, just trying to get better every year, regardless of age. At the end of the day, it’s just a number and it will catch up, but if you put the work in you can continue to excel. There’s a lot of room for me to still improve I think.”

With seven years as the bench boss in San Jose, and another four leading the Edmonton Oilers, McLellan has spent the majority of his professional career coaching against Brown on a consistent basis, rather than having him on his side.

He’s certainly enjoyed coaching him over the last year plus, much more than he did facing him as an opponent.

McLellan praised Brown’s ability to adapt as he’s gotten older and how he’s continued to improve at the same time. He talked about his top-line winger’s compete level on top of that, and his habits of studying how to continue to be an efficient player as he’s aged.

“I’ve been up against him a lot longer than I’ve been with him, and I can tell you the [88] games that I’ve been here, I’ve enjoyed it a lot more on his side than standing there watching him play against you,” McLellan said. “You can see why he’s had such a great career. He’s competitive, he’s been able to adapt and change and I think that’s one of the biggest things for an individual that’s played that long, understanding how the game is played, study it a little bit and figure out how you’re going to be effective in the game.”

As the Kings move forward, in their pursuit of one of the four playoff berths in the West Division, Brown will continue to be relied on by his teammates, both as a leader and as a producer.

Brown’s hardworking nature is something that will continue to shine through, with or without the goals, but while they’re flowing as steadily as they are, the team will continue to take them.

“He’s been a hardworking guy all these years, we’ve all seen it first-hand,” Kopitar said. “To me, he’s just getting rewarded right now and talk a lot about confidence and he’s riding the wave right now. Hopefully he can do it for as long as he can.” 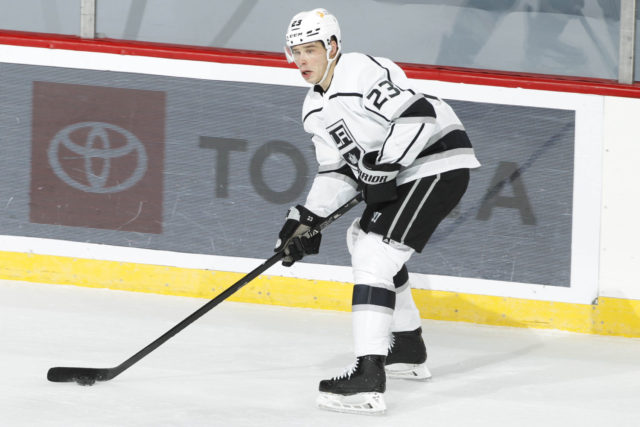