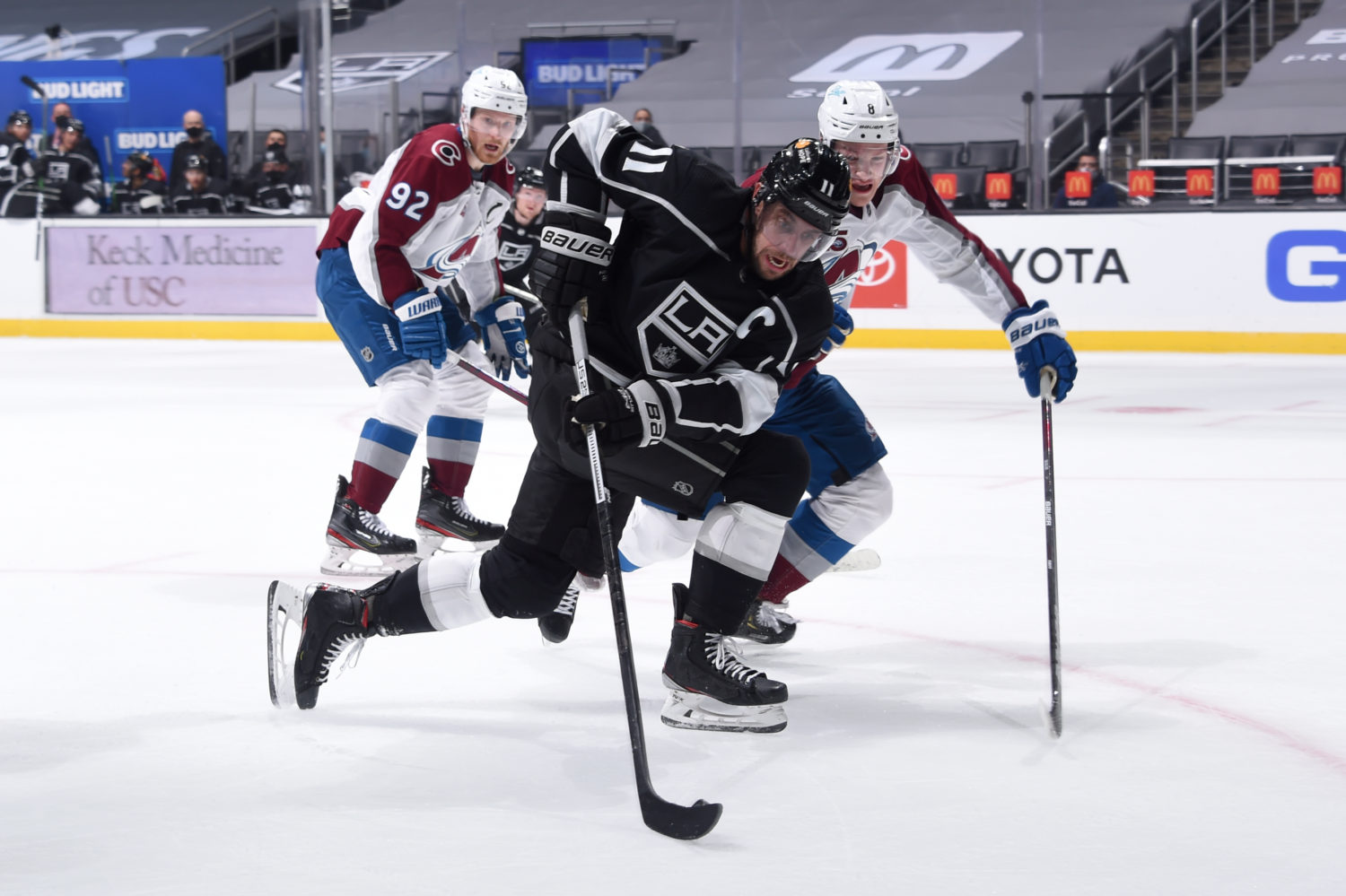 An interesting exercise, conducted by a panel of NHL.com writers, listed four LA Kings players as being in the mix for year-end awards. Now, we are wayyyyyyy, wayyyyyyy down the road here, but it’s still a good indication of how the Kings are trending.

The voting, found here, consisted of five writers selecting three nominees for the Hart, Norris, Vezina and Calder trophies, which resulted in four LA Kings players earning some love as West Division representatives. The pool gets tighter, as you expand throughout the league, but it’s still fun to take a look at nonetheless.

Hart Memorial Trophy – Most Valuable Player
It should come as no surprise that Anze Kopitar is the leader in the clubhouse amongst players in the West Division as an MVP candidate. The Kings number-one center collected three of five first-place votes, and 19 of 25 possible votes in total, meaning he was ranked first or second on all five submissions.

Kopitar leads all players in the West Division with 21 points (4-17-21) and is tied for tenth in the NHL in total scoring. The aforementioned scoring streak ended on Monday against the Blues, but Kopitar collected at least a point in the prior four Kings wins, and seven games in total.

Kopitar was touted earlier this month as both a contender for the Hart Trophy and the Selke by ESPN’s Greg Wyshynski, who talked about Kopitar’s play at both ends, as well as how far he’s separated himself from the pack on his team in terms of scoring. His head coach agrees.

“Kopi is so consistent in the things that he does,” Kings Head Coach Todd McLellan said, earlier this season. “He commits to both ends of the rink, and that allows him to be good at both. I think there’s some great offensive players that cheat to get their offense and as a result, it hurts the team. That’s never the way that Kopi has played and I don’t think he’ll ever finish his career cheating. He sets the tone and when you play the right way, you often get rewarded, or your linemates do. In his case, he and his linemates are.”

Norris Trophy – Top Defenseman
Drew Doughty has brought it so far this season, both offensively and defensively, and was ranked as the second choice in the West Division for the Norris Trophy, trailing just Cale Makar. Doughty received one of five first-place votes, to Makar’s four, and collected 12 votes in total, compared to Makar’s 23. The former winner was on four of five ballots, with one first-place vote, two second-place votes and one third-place vote.

It’s been a big year for Doughty, who has faced external criticism over the past two years and seems determined to blow the narrative back where it came from. Doughty continues to rank amongst the NHL leaders in minutes logged, and has found himself with much improved advanced stats compared to the last two seasons. With 15 points (4-11-15) from 17 games played, Doughty is tied for seventh in the NHL in points amongst defensemen, and has quarterbacked the NHL’s fourth highest-scoring power play this season with eight PP Points.

“30 minutes a night, we appreciate Drew’s abilities,” McLellan said of his number-one defenseman. “He’s really had an outstanding season so far in my mind, both offensively and defensively, leadership wise, everything about his game right now is in a good spot. Not only has he been able to take care of himself on the ice, but he’s been able to manage playing with a young defenseman for a lot of the season right now and he’s making him a better player.”

Vilardi is the flashier nomination and the one you probably expected to see here. In the midst of a four-game point streak, Vilardi has started to pick up a bit of Calder buzz on social media. He continues to find consistency on a night-in, night-out basis in the NHL and has seen his point totals rise over the last couple of weeks. If you include shootout goals, Vilardi has tallied the game-winning goal in each of the last three Kings wins, and his eight points on the season are now tied for eighth amongst first-year players.

“We’ve got to let this guy breathe a little bit offensively,” McLellan said last week. “Even I looked at his ten-game stint at the end of last year, he’s almost a point-per-game guy, that’s great, he’s going to get 60 points, 20 goals for us, it’s a hard, hard league offensively. We’re trying to establish a complete game with him, faceoffs, defensive responsibilities, the ability to check the other team’s top players. I think [his offense is] going to open up as time goes on. He’s doing the same things he did last year, when he put points up all the time, in fact, I think he’s doing them better right now, it’s just not going in quite as much and that’s fine. We’re okay without it right now, just keep working on your game and become an overall better player.”

It’s nice to see a bit of buzz for Mikey Anderson as well, with a pair of third-place votes. Anderson does not bring the gaudy offensive totals that will jump off the page, but he’s a 21-year-old rookie defenseman playing alongside Doughty on a top pairing, and not looking out of place doing it. That’s not to say that Anderson doesn’t have offensive ability – his shorthanded assist in Arizona says otherwise – but his game is based on doing the little things right and consistency, which he has done pretty remarkably for a player with as little NHL experience as he has.

“The thing for me is, he plays within himself, he doesn’t try and be something that he’s not,” Kings assistant coach Trent Yawney noted. “He’s very, very steady. The detailed part to his game is very professional. During that [six-game] tryout that he had at the end of last year, after about three games I remember Todd and I were talking and it was like, ‘You know what, this guy, he gets it. He gets it!’ We started at about 13 minutes. Then, 13 went to 15, and then by the end he was playing about 17-18 minutes. Now he’s over 20, he’s earned it. It’s steadiness, his ability to make a good first pass and be very good on the penalty kill.”

As stressed, we’ve got a long way to go here, but it’s still exciting to see Kings players, both veteran and young, being talked about amongst the best in the division.