2/22 Practice – To change or not to change, plus Walker/Athanasiou return, 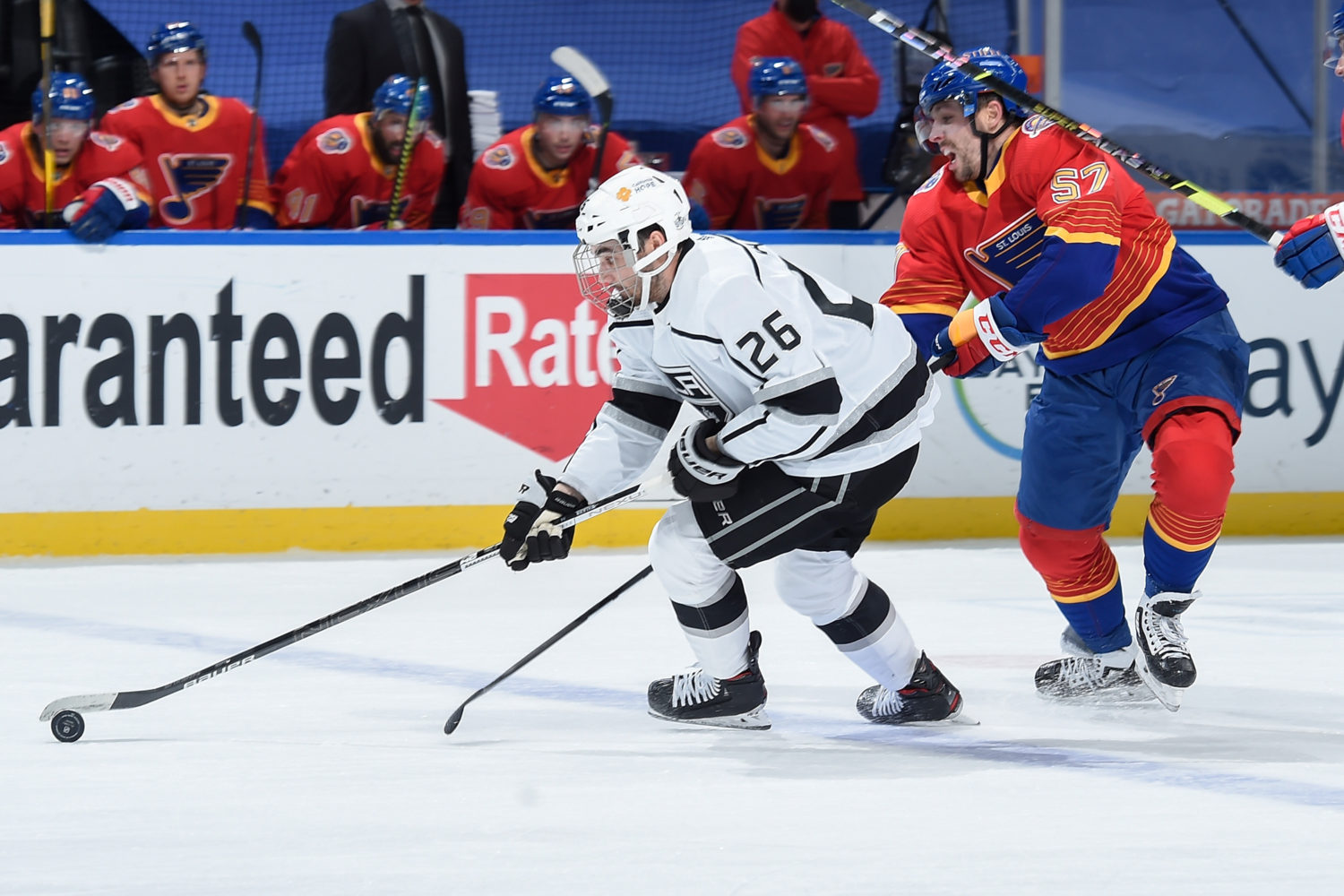 The Kings returned to the ice this afternoon at Enterprise Center in St. Louis, in between games against the Blues.

Everyone was accounted for today, with no apparent changes to the group from what was listed yesterday. That’s not to say, though, that we’re guaranteed to see the exact same lineup tomorrow that we saw last week. On the team’s current five-game winning streak, the Kings haven’t used the same lineup twice.

“I think every game that we’ve won, maybe with the exception of one, we’ve made a lineup change,” Head Coach Todd McLellan said earlier today. “A lot of that is due to guys coming back from injury and working their way back into the lineup. We have to put what we think will be the best lineup on the ice on any given night, and by no means are we always right. We take a calculated estimation of who has played well in certain situations, against certain teams, line combinations, pairings, special teams and the confidence level of certain individuals. We’ll never just make a change for change’s sake, is the best way to put it.”

Players have subbed in and out, and those entering the lineup have played effectively, without disrupting the flow and the momentum of how well the team has played.

One such player was defenseman Sean Walker, who made his return to the lineup in last night’s victory over St. Louis.

We’ll take a deeper look into Walker’s return below, but he offered some context on jumping back into the lineup with a team that is playing as well as the Kings are right now. While there is a bit of thought towards keeping the flow going, Walker felt it was even easier to slot back in with the team playing this well than it might have been otherwise.

“I think the team’s obviously been really good, so it makes it easier actually to come into the lineup,” Walker said. “Not trying to do too much when you first get out there, make sure you’re comfortable and get your hands back, mindset in the game. When everybody is playing so well, it makes it a lot easier on you, and that was huge for me.”

Thus far, though he admits he doesn’t always get it right, McLellan has pushed the right buttons over the last slate of games. Walker, Andreas Athanasiou, Blake Lizotte and Tobias Bjornfot have all been inserted during this winning streak, and all four have played key roles. How he manages the lineup moving forward we will find out tomorrow, but here’s how the Kings lined up, by jersey color, this afternoon.

Walks This Way
Speaking of Sean Walker, the blueliner returned to the lineup last night for the first time since he took a slapshot to the face on January 28 versus Minnesota.

While it wasn’t a normal injury to return from – it’s not overly often that you see the situation that happened to Walker – he felt that his means to recovery was still the same philosophy as a different injury would be.

“I wouldn’t say it’s much different than any other injury,” he said. “Obviously you have to wear the cage, that was the main issue, getting used to that. Besides that, I think it’s similar to any other injury, you just make sure you’re on top of your conditioning and the trainers put in place a return to play program for you. I’d say really, it was only the cage. Besides that, just making sure I was ready to go when the time came.”

Walker played 17:58 in his return to the lineup, fourth-most amongst Kings defensemen, including 1:40 on a very effective second power-play unit, which was responsible for the game-opening goal. He felt that he was able to use his time off to watch the games, focus on a few areas of emphasis and apply them to his own game when he finally got back on the ice.

“When you’re watching the games, you get to see a lot more from the sky,” Walker said. “You can pick out certain things you might want to do better, and think about doing it yourself. For me, with the injury, I had to make sure I was on top of my conditioning, make sure I was feeling okay, so that was the main focus. Once I got back to practice, just making sure I was dialed in and ready to go.”

From behind the bench, McLellan was happy with Walker’s return to play.

There were no real training wheels in his first game, and the emergence of some younger players on the blue line gave the Kings the luxury of waiting until Walker was truly ready to go, there was no need to rush him. As a result, Walker’s legs were good last night, and he played an effective game in his first one back.

“I thought he was a factor in the game,” McLellan said. “His legs were good – he’d probably tell you he was a little rusty with the puck, he had a few points in the game where he could have made some plays – but we’re just happy to have him back. He means so much to our team, getting him and Matt Roy back into our lineup makes a big difference.”

Powered By AA’s
Also recently returning to the lineup was forward Andreas Athanasiou, who has now skated in two games back with the team.

Athanasiou brought jump and speed to the lineup, especially last night, as he was noticeable throughout the game against the Blues, both at even strength and on the power play. McLellan had high praise for Athanasiou and his linemates.

“To come back and integrate back into the lineup I think speaks volumes about his ability to skate, his quickness,” McLellan said. “Today, I think we saw that a little bit more, he has quick hands, quick feet. That line was dangerous, there’s some speed on the wing and [Amadio] can move the puck around. We were happy with the minutes that they gave us.”

Athanasiou spoke today about getting his legs back after getting back on the ice, his line’s performance and his recovery process.

The Kings are back on the ice tomorrow morning in St. Louis for a morning skate in advance of an oddly scheduled 8:30 PM Local puck drop.