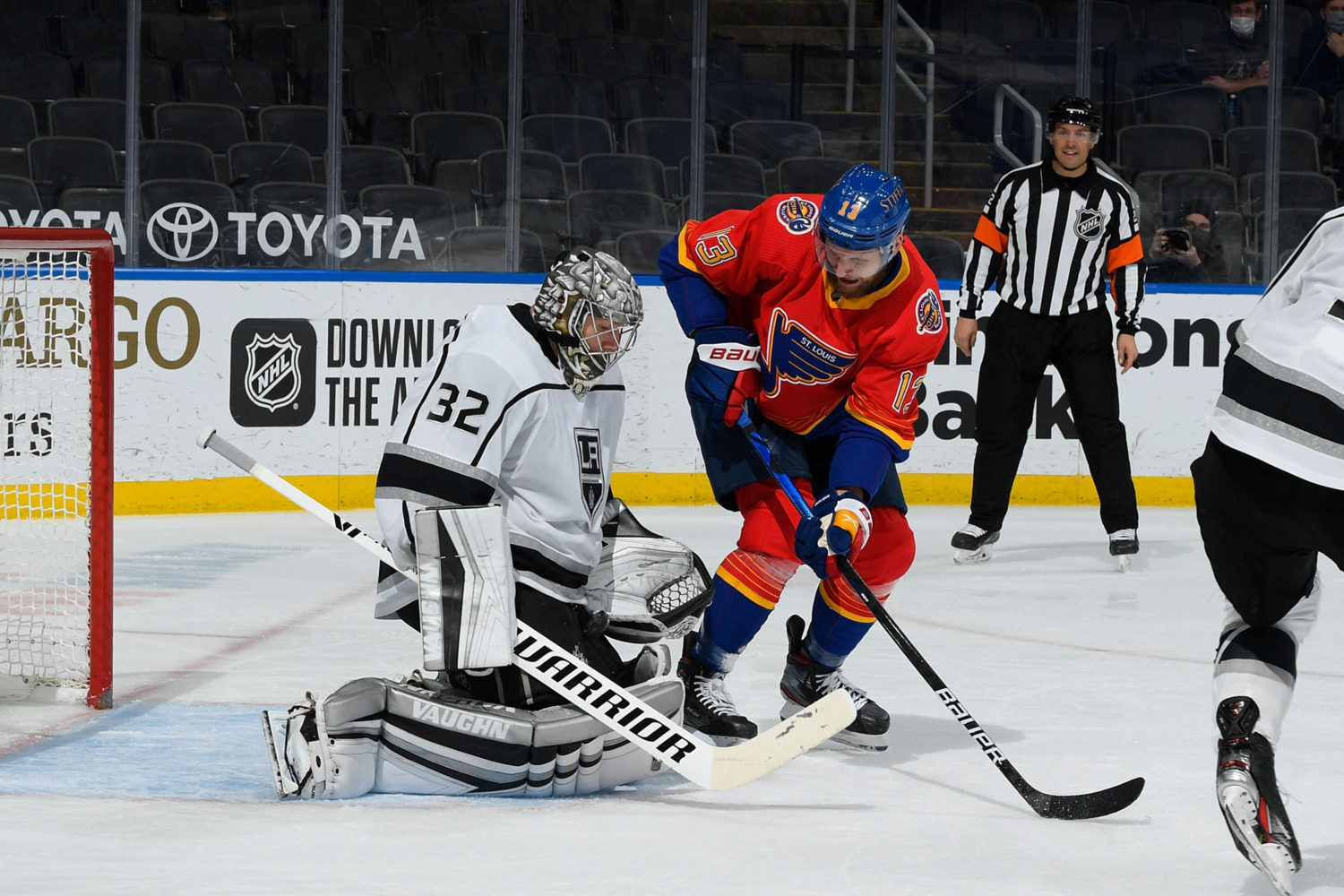 Jonathan Quick posted his second shutout in three starts and Dustin Brown scored twice as the LA Kings skated to a 3-0 victory, and a 3-0 start to the road trip, on Monday evening in St. Louis. With the win, the Kings have now won five straight games, have points in six consecutive contests and have improved to 8-6-3 on the season.

The Kings got a power-play goal from the second unit, as forward Gabriel Vilardi opened the scoring late in the first period, followed by yet another goal from Brown to bring the score to 2-0 after 40 minutes of play.

The Kings played an aggressive first half of the third period, though they got some help from Quick in the latter stages, but in total they did enough to keep the Blues off the board before Brown made it a multi-goal game with an empty-net goal with 63 seconds remaining. A good ending for the 36-year-old winger, who was skating in his 1200th career NHL regular-season game, becoming the first player to play 1200 games with the Kings organization. With 10 goals from his first 17 games played, he’s never had a better start to an NHL season from a goals-scored perspective.

With the victory, Los Angeles improved to 2-1-0 on the season, as it pushed into a tie for third in the West Division with 19 points.

On the message heading into tonight’s game
It was just be ready to play. The first few minutes, our starts, we weathered the storm and we ended up turning the tide halfway through the first and ended up outshooting them. They’re a really good team at home, we got a power-play goal early in the game and it’s been a big part of our success, our power play.

On having two power-play units firing, with the second unit scoring tonight
Its huge. The last couple of games, they’ve been a cleaner power play than us, just how it works some nights, we have really good players on both units. I think the other key to it is we have a little bit different looks on each one, so it’s tough to defend if you have to adjust to Gabe’s unit or Kopi’s unit, because of how we run them.

On the team’s recent surge, and if it should come as a surprise to those watching
I think here it’s definitely a team collective. We just talked about getting those guys back in the lineup, they’re huge parts of our team and we weathered the storm while they were out, we’re getting more pieces back [now] and it really helps us. The surprise part, I think everyone is probably surprised outside of the room. I think we have a good team in there, I think we’re building on some of the momentum we had last year, the confidence. We have some young players coming in and kind of learning on the fly and doing a pretty good job of it. You have a good veteran core group and some other spots are starting to get filled in by some younger players, which is a good thing.

On if he feels he’s doing anything different from a shot selection standpoint that’s led to more goals
Part of it is I’m fresher on the offensive side of the puck, I haven’t killed [penalties] starting maybe the middle of last year I stopped killing. That’s not only a lot of minutes but minutes that are quite honestly hard and exhausting minutes to do, so maybe I’m a little bit fresher. Minus the empty netter, I haven’t scored a goal outside of what, ten feet of the net. Getting there a lot more, more often and earlier in the shifts, I’m fresher so I can get there more often this year.

On having both power-play units going, and the second unit scoring tonight
Without a doubt, it can keep the opposition off balance. The second unit doesn’t mimic what the first unit does in certain situations, especially on breakouts and entries. They do something different and it’s valuable when they’re clicking. Tonight, they got the winning goal, it was important for them to feel confident and I think we kept them out there a little bit longer than we would’ve normally, but they deserved that time in other power-play situations, so good for them.

On Andreas Athanasiou’s game, tonight and since he’s come back into the lineup
The first one, it’s difficult to come back from what he went through, not being able to train basically at all for two weeks is a tough thing for an athlete in any sport. To come back and integrate back into the lineup I think speaks volumes about his ability to skate, his quickness. Today, I think we saw that a little bit more, he has quick hands, quick feet. That line was dangerous, there’s some speed on the wing and [Amadio] can move the puck around. We were happy with the minutes that they gave us.

On Dustin Brown’s game and recent production
I’ve been up against him a lot longer than I’ve been with him, and I can tell you the [87] games that I’ve been here, I’ve enjoyed it a lot more on his side than standing there watching him play against you. You can see why he’s had such a great career. He’s competitive, he’s been able to adapt and change and I think that’s one of the biggest things for an individual that’s played that long, understanding how the game is played, study it a little bit and figure out how you’re going to be effective in the game. Accept change, and our group as a whole has done that, it starts with the five veterans that we have and it works its way down. There’s no one more senior than Brownie, and he’s getting rewarded for some of the things he’s doing well right now. It might sound strange, but we actually took some things away from him, which is never easy as a veteran player, and that would be penalty kill and as a result, I think he has more pop in his legs. Would he like to be out there? Of course he would, but he’s got more pop in his legs and he seems to get more done without it, so good for him.

On the team’s current charge, and if he’s surprised it’s being led by the team’s veterans
It’s an easy answer, we’re not surprised one bit. We’ve chosen those five to be here for a reason. They have championship characteristics and qualities that they spread throughout the locker room on a daily basis. We can win 3-0 or lose 3-0, and they’re still doing the things that we need them to do to bring young players along. It’s such a good environment to be a young player in right now

– Kings forward Dustin Brown became the first player to play 1200 games with the LA Kings, as he reached the milestone in tonight’s contest.
– Brown’s two goals tonight gives him ten on the season, the most amongst players in the West Division and tied for fifth in the NHL. With 10 goals from 17 games this season, Brown is off to the best start of his NHL career, by goal-scoring standards.
– Jonathan Quick collected his second shutout in his last three starts and has stopped 79 of 81 shots he’s faced over that three-game stretch, all Kings victories.
– Center Gabriel Vilardi scored his fifth goal of the season, and extended his point streak to four games, with the game-opening goal, a power-play tally, late in the first period.
– Forward Jeff Carter collected the primary assist on Vilardi’s goal, which extended his own scoring streak to five games, the longest active streak on the Kings.
– The Kings currently have five consecutive victories, and points in six straight games.

The Kings are scheduled for a practice day tomorrow afternoon at Enterprise Center.