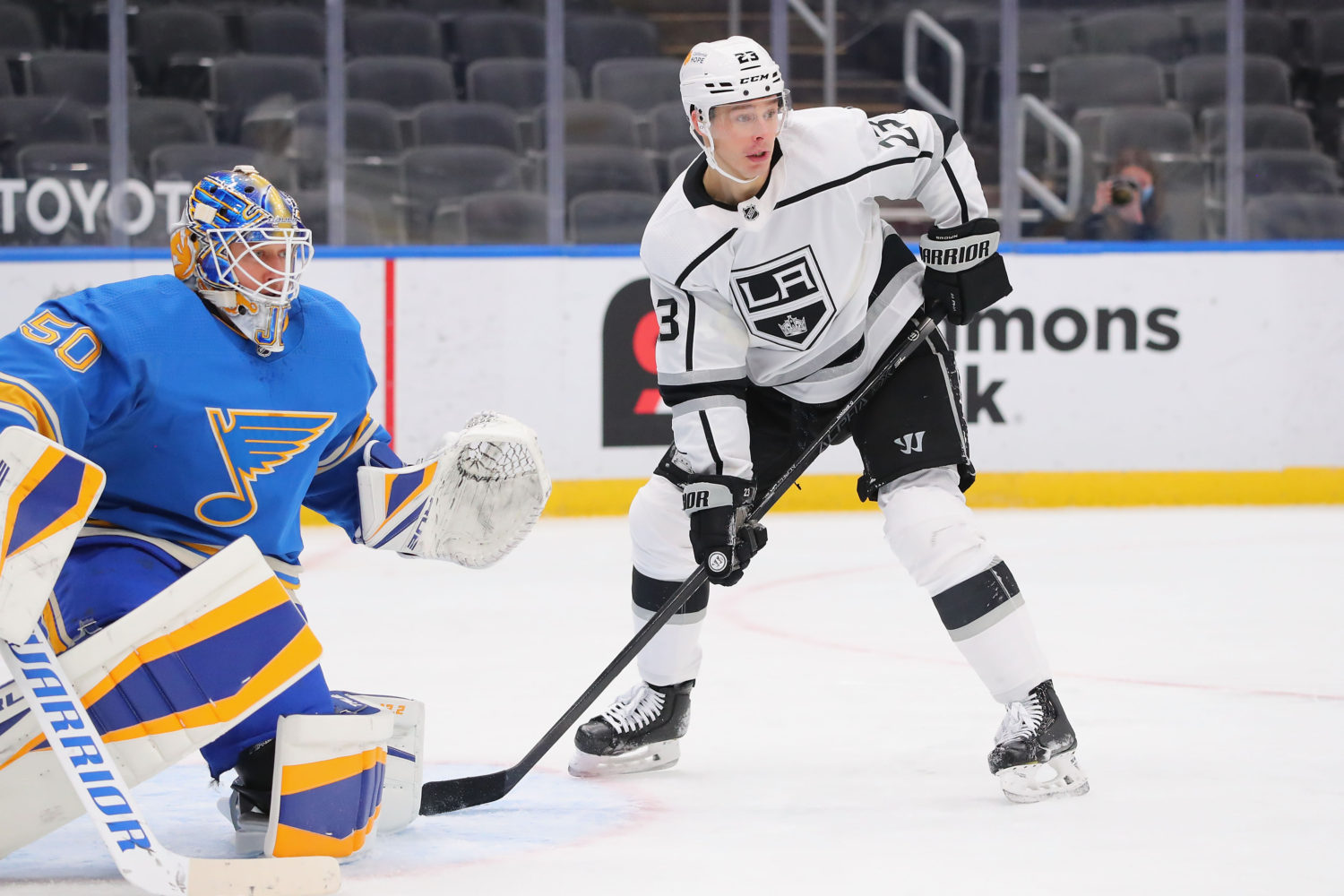 TONIGHT’S MATCHUP: The LA Kings continue their six-game road trip tonight in St. Louis, with the final two games of the season in Missouri. The Kings are 2-0-0 on the trip to date, following a pair of wins in Arizona.

HEAD-TO-HEAD: The Kings are led by forward Anze Kopitar in the season-series against St. Louis to date, with four points (1-3-4) from two games played, while forward Adrian Kempe has three points (1-2-3) of his own. With his goal on 1/23, Dustin Brown tallied for the 18th time in 54 games against the Blues, the third highest goals-per-game rate of his career against a single opponent. St. Louis had a trio of players – Brayden Schenn (2-1-3) David Perron (1-2-3), Ryan O’Reilly (1-2-3) with three points from the two games earlier this season, with Schenn tallying twice after he scored four goals against the team that drafted him a season ago. At .47 goals-per-game, Schenn has scored at a higher rate versus the Kings than any other NHL opponent.

KINGS VITALS: After a full off day yesterday, the Kings returned to the ice for a full-team morning skate at Scottrade Center in St. Louis. Joining the team on the ice today for the first time was forward Rasmus Kupari, who was reassigned from AHL-Ontario to the Kings taxi squad on Saturday. Kupari collected eight points (1-7-8) from seven games played with the Reign and led the AHL in scoring at the time of his recall. Forward Jaret Anderson-Dolan, who has been deemed week-to-week with an upper-body injury, has returned to LA, and as such did not skate this morning and will not be available tonight.

Forwards Blake Lizotte and Andreas Athansiou, who both returned to the lineup in Arizona after being removed from the COVID-19 Protocol list last week, were both full participants today, as was defenseman Sean Walker, who continues to work his way back into the lineup after he took a slapshot to the face back in January.

McLellan talked after today’s skate about evaluating a few things after the team got off before making any firm decisions for tonight’s lineup. He said that the team may make some changes tonight, from Saturday in Arizona, after those conversations.

One possibility is the return of Walker, who has moved from not practicing, to practicing in a red, non-contact jersey for a few days, to a full participant, though still in a full cage. McLellan did not commit on Walker either way for tonight – He said the other day that the Bowling Green alum will play on this road trip, and affirmed today that he wants him in as soon as he is ready.

An important part of the return of players to action is making sure that they are truly ready to go. McLellan discussed the sports science angle of things a bit, talking about how players need to be ready by certain metrics, with their legs, lungs, etc.

He went on to elaborate, however, about the emotional side of things too. It’s important that a player is ready to go physically, but also mentally as well.

“Walker, after taking a shot in the face, we’ve got to make sure he’s emotionally ready to go back in,” McLellan said. “Even with a cage on, you have to have that conversation with him and be able to read what he’s telling you, cut through the BS sometimes and go from there.”

Austin Strand remains an option on the right side for the Kings, after his cross-checking infraction in Arizona resulted in just a fine, rather than a suspension. Strand caught Arizona forward Conor Garland in the throat area with his stick in Game 2 against the Coyotes, resulting in a penalty and a bit of a hole in the wallet, but not a suspension.

UPDATE – Walker has been activated from injured reserve, while Strand was assigned to the taxi squad. A Walker return to the lineup tonight feels probable at this point.

In net, the beauty of a two-headed monster is that, as long as both goaltenders are playing as well as they have over the last five games, you can’t go wrong. The downside is that we don’t always know who will play.

Jonathan Quick has been projected to go tonight, and if he does indeed start, he will be looking to extend his own personal winning streak to three games, following victories over Minnesota and Arizona. Quick posted the team’s first shutout of the season against the Wild to kick it off, followed by a win in Game 1 over Arizona. At 10-15-3 all-time, Quick’s regular-season record against the Blues is his lowest, at five games below .500, against any NHL foe, though his .910 save percentage falls generally in line with his lifetime numbers.

BLUES VITALS: Like the Kings, St.Louis was last in action on Saturday, in a 5-4 defeat against the San Jose Sharks. Goaltender Jordan Binnington has started five of the last six games for the Blues, including each of the last three. Binnington ranks tied for sixth in the NHL with 14 games played this season, and tied for fourth with eight victories and is expected to make the start tonight in the home net.

In terms of skaters, forward Sammy Blais returned to the ice from the COVID-19 Protocol list, after St. Louis Head Coach Craig Berube said this morning that Blais was a “false positive”. The 24-year-old forward missed Saturday’s game against San Jose as a result.

Here’s how the Blues lined up this morning, per Lou Korac of NHL.com –

St. Louis is a hard, heavy team. McLellan said after the Arizona series that the pre-scout used for the games against the Coyotes had a bit of use against St. Louis as well. This morning, he reaffirmed the physical, forechecking nature of the Blues, and the importance of the Kings attempting to slow them down as much as they can.

“They’re a forechecking, hold onto the puck, stick their rear ends out to protect it, crash the blue paint [kind of team],” McLellan said. “I think any time you play St. Louis, you talk about buckling up the helmets tight, be prepared to do a lot of the dirty, grunt work. If we can slow them down coming through the neutral zone, buy ourselves a bit of time on breakouts, I think that will help. Like every coach would say, if we can take advantage of the opportunities we do create at the other end, we’ll be okay, but it’s a tall task. They’re a really good team, I don’t think they get enough respect. They just won the cup a couple years ago with a lot of the same players and the same ingredients, they’re a team to be reckoned with.”

So……What’s Gone Well?
The Kings have won four straight games, with wins over San Jose, Minnesota and Arizona (x2). So, what has gone well for the Kings?

Asking defenseman Olli Maatta and forward Adrian Kempe, they both pointed immediately to the breakout. Both players feel that the team has broken out pucks well in the last run of games, which has allowed the Kings to spend less time playing defense and more time on the offensive.

Maatta – I think breaking out well, that’s a big thing. We’re getting out of our own zone pretty well, and that helps to play in the other end of the ice. When a team does it to you, it’s hard to play against. When we do it, we’re a really good team. I think that’s one of the bigger things, and it’s not all the d-men, it’s the whole five-man unit, plus the goalie as well. I think that’s been something we’ve gotten better at.

Kempe – I think it all starts on the backend, we’ve been having good breakouts, d-zone has been solid. We’ve been trying to minimize the time in our zone, cut plays off, and I think that’s been really good lately. We’ve been breaking out well, passes have been on the tape and it sets us up to play on offense, as well. It starts on the backend, everyone’s been playing solid lately too, so that helps.

Todd McLellan pointed to a different part of the defensive game, and that has been shutting down cycle plays more effectively and thus creating less extended shifts in the defensive end.

He pointed to St. Louis and Minnesota at full-strength as being strong teams on the cycle, which they are, and said that tonight’s game will begin a test for the group to see how well they can keep that part of their game going, against new opposition.

McLellan – For me, and I think we’ll take the test again tonight in St. Louis, I thought the last time we were through with the Blues and in Minnesota, we did a poor job of defending our zone. We didn’t kill many cycles, we kept a lot of plays alive and I think our team, we made some adjustments, we worked on some things and they’ve improved in those areas. We haven’t had that test again against those cycling teams, we’ll see how we do tonight, I’d like to think there will be improvement.

All three quotes point back to defensive zone improvements, that will need to continue against the highest-scoring team in the West Division.

Adrian Kempe spoke with reporters this morning on a variety of topics, including his prominence on zone entries on the power play, tonight’s matchup between the highest-scoring teams in the West Division and his line with Gabriel Vilardi and Jeff Carter.

Hear from Kempe below!

The Red, White & Blues
The Kings will face off against a St. Louis team wearing its third jersey in as many games against Los Angeles. In the first head-to-head game of the season, we saw the throwback, heritage jerseys, while the Blues wore their regular, darker blue home sweaters in the rematch the following night.

Tonight, the Blues will wear their reverse retro, red sweaters for the second time this season. The Blues in Red look also means that the Kings will face teams wearing their Reverse Retro jerseys in back-to-back games. The Coyotes wore their purple concept on Saturday, the first time an opponent had worn their Reverse Retro sweaters against the Kings, in the 4-2 Los Angeles victory.

The Kings will face Reverse Retro sweaters in all three stops on their current road trip. Los Angeles will also face Minnesota’s Reverse Retro jerseys in their next two-game set, but will be wearing their own in the same game, in a battle of the RR sweaters. The forum blue and gold uniforms made the trip with the team, accounting for a few extra bags, in advance of an NBC game at Xcel Energy Center.

Game Thread coming up next in St. Louis! 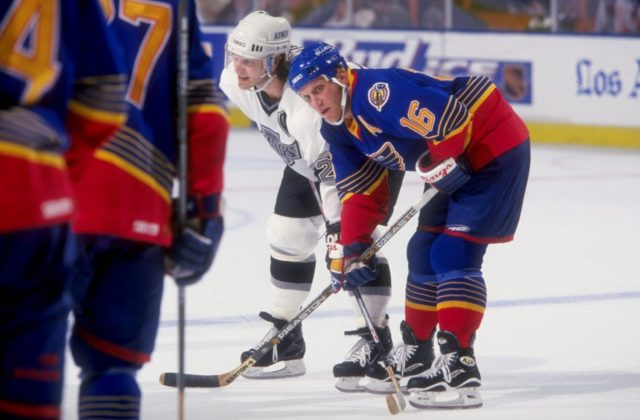 By Zach Dooley
938 Comments
Behind the Scenes

By Zach Dooley
1,176 Comments
Behind the Scenes