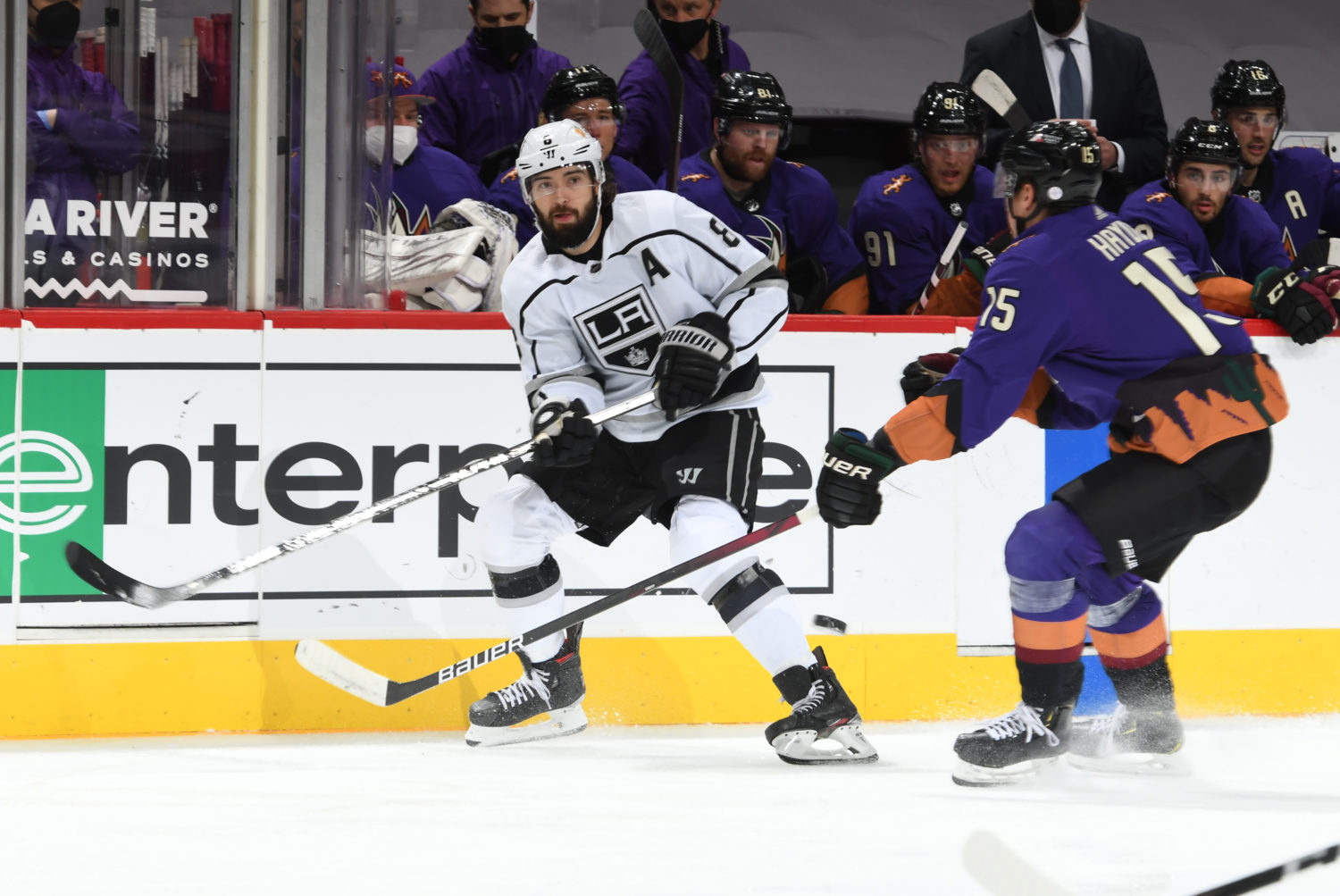 Let’s start off with a few random numbers to kick off today’s Angeles Analysis, shall we? Okay, fine, they’re carefully chosen numbers.

.938 is the combined save percentage of Jonathan Quick and Cal Petersen over the last five games, during which the Kings have gone 4-0-1. .949 is the combined save percentage of both goaltenders in the last nine games the Kings played last season, in which the team went 7-1-1. There are two pretty clear and common themes here – stout goaltending and winning, with both going hand-in-hand.

The Kings have gotten quality starts from Petersen and Quick on their current five-game point streak, with each goaltender earning a victory in Arizona, as the Kings completed their first two-game sweep of the season over a pesky Coyotes team that doesn’t make life easy on their opposition.

McLellan said between the two games that he doesn’t feel that he has a number one goaltender, but rather two number one goaltenders. During a stretch when Petersen started three consecutive games, McLellan was pressed on a few occasions to bite on whether he’s prepared to name Petersen as the workhorse of the tandem. McLellan said every time that this is a team that will rely on two goaltenders, and I think we’re seeing how successful this team can be when both men are playing at the top of their game.

While the strong play started in net, it wasn’t as if the goaltenders stole both games in the desert, either. The Kings played well defensively for the better part of two games. Certain breakdowns existed, as they always will, but that’s when Petersen and Quick stepped up the challenge.

“For the most part, I thought it was the type of game our team needs to play to win, and that’s a good sign that we understand that,” McLellan said after the first win.

The Kings got strong efforts from throughout their lineup, as well as some timely plays, to put away a tenacious Arizona group.

Take forward Gabriel Vilardi for example, who was a good example of both. Vilardi was noticeable on Thursday and Saturday, as he continues to work towards finding that consistency at the NHL level. Capping off a pair of good efforts was a timely goal from an absolute snipe of a shot from the slot, one that a player of his caliber isn’t going to miss. His goal came just over three minutes after the Coyotes had tied the game, reigniting the Kings down the stretch, in a game they were able to close out. Good signs from a young player.

Defenseman Drew Doughty would certainly fit the bill as well, but his play in this series, and on the whole this season, merits more than just a paragraph in a series analysis piece. Doughty has led a young group of defensemen and continues to perform at a high level. We’ll take a deeper dive into Doughty’s play later, but we’ll let his head coach talk him up a little bit here anyways.

“30 minutes a night we appreciate Drew’s abilities,” McLellan said. “He’s really had an outstanding season so far in my mind, both offensively and defensively, leadership-wise, everything about his game right now is in a good spot. Not only has he been able to take care of himself on the ice, but he’s been able to manage playing with a young defenseman for a lot of the season right now and he’s making him a better player.”

Looking at the games as a whole, it’s clear that the team has been able to build some momentum, stemming back to the San Jose series. You can’t help but get the feeling that the Kings might’ve lost one, or even both, of these games last season or the year before. Losing a two-goal led on Thursday, and a one-goal lead twice yesterday could have led the wheels falling off a bit. Maybe they don’t get that timely goal to retake the lead, or that timely save that allowed the timely goal to happen. It was just a bit of a different vibe in those situations as opposed to the past two seasons, and the team building some momentum has something to do with that.

“Momentum carries over for your team, 100 percent,” defenseman Drew Doughty said. “When you lose five in a row, it’s hard to keep the energy up at practice, it’s hard to keep the energy up in the room. Everyone’s there competing their hardest, but it’s harder when you’re losing games. When you’re winning games, it’s more fun after the game, on the plane, on the bus, in the room, everywhere. When you’re rolling, you’re having fun, the momentum is definitely with you and we need to keep it going.”

As we sit back and enjoy our Sunday, endlessly staring at a graphic of the Kings occupying a playoff spot in the early stages of the season, I find myself thinking of a quote from Jonathan Quick from the first week of training camp.

As he discussed the shortened NHL season, he talked about how much the standings can fluctuate on even a day-to-day basis in a shortened season from his experience in the lockout-shortened 2012-13 season. The 2021 Kings have been a perfect example of it. Ten days ago, sitting in eighth place in the division, on a five-game losing streak, perceptions of the team were bleak. A mere four games later, with the team four spots higher in the standings, my oh my how things have changed.

That’s probably to be expected throughout the course of the season, and it’s important to remember that there will be ebbs and flows. To use the age-old hockey player cliché, never get too high, never get too low. Right now, the Kings are riding a high, and that’s to be enjoyed today. Tomorrow, it’s back to work with an eye on extended that run even further.

The Kings and their winning streak now face their toughest test yet, in the West Division leaders, the St. Louis Blues. The 2019 Stanley Cup Champions have 10 victories on the season and present a heavy, physical opponent for the Kings, who don’t allow much in terms of offense against.

The set against the Blues will be a good measuring stick for the Kings. If they can continue to play their style of hockey against a top-caliber opponent, it will say a lot about what this team could be. But that’s a story that will write itself over the next three days.