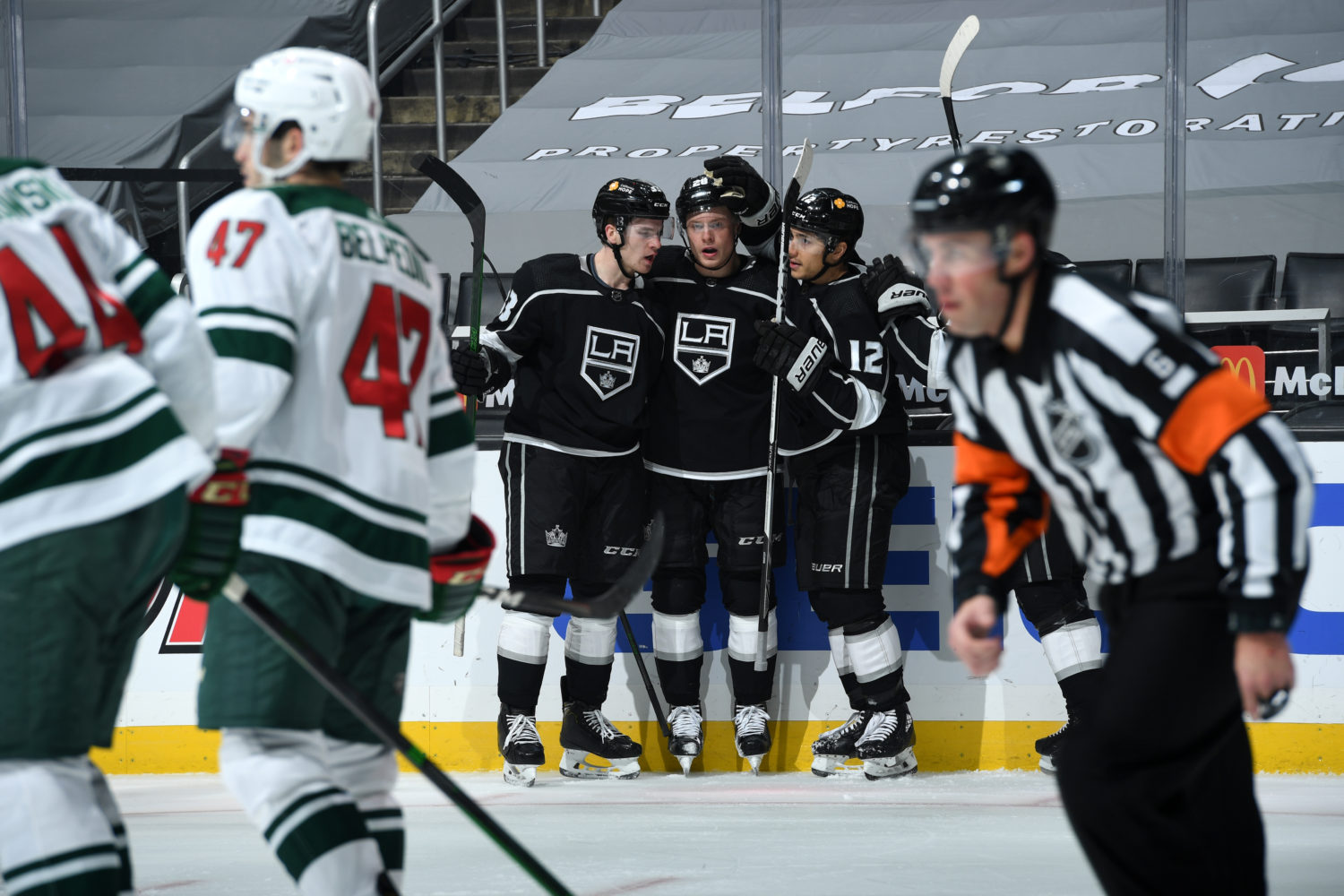 Facing a Minnesota team that had four regulars on defense out of the lineup, the Kings were aggressive and energetic off of the opening puck drop, getting in on the forecheck and going to work. The result was a power play, early in the game, on which Jaret Anderson-Dolan converted to give the hosts an early lead.

“When we had an opponent that hadn’t played in [14 days], and they’ve had very little practice time, one of the things we wanted to do was get off to a good, heavy start, and I thought we did that through the first few shifts,” Todd McLellan said, after last night’s game. “We got onto the power play and scored, and that certainly helped.”

In hindsight, that goal less than three minutes into the game was all the Kings needed, as Jonathan Quick posted his 53rd career shutout in the NHL with 28 saves between the pipes. Really though, it was the insurance markers that allowed the Kings to overcome the two-goal hurdle that had tripped them up in both prior meetings against Minnesota in Downtown Los Angeles.

After Anderson-Dolan connected with Trevor Moore late in the second period, the Kings took yet another two-goal lead into the final frame. Last night, however, they were finally able to put the nail in the pesky Minnesota coffin, as Anze Kopitar set up Dustin Brown for that ever-so-important third goal that pretty much put the icing on the cake for a Kings victory.

“Getting the third goal I think was really important for us,” McLellan added. “It kind of took their two-goal belief away and it settled us down. It happened late in the game, but it was important that it happened.”

It’s naturally hard to look at last night’s win without acknowledging that the Wild were without several regulars, at all positions, due to their recent COVID-19 outbreak. Regardless though, against a team that many had pegged for the fourth and final playoff spot in the West Division, the Kings are 2-1-2 in head-to-head matchups this season, with the two teams even on six total points. There’s something to be said for that.

Last night’s game brought not only the team result, but individuals as well.

We saw a vintage effort from Jonathan Quick between the pipes, as he allowed exactly zero pucks into his net. The left-pad save on Mats Zuccarello in the third period, when the game was still 2-0, was a thing of flexible beauty.

Quick’s performance came after he was the team’s backup for three straight games, following being relieved by Cal Petersen on February 5 in Vegas. McLellan has insisted, as he’s been asked several times, that Quick and Petersen remain a goaltending tandem, not a starter/backup situation one way or the other. For his part, Quick dismissed any notion after the game that there was a chip on his shoulder, coming back in after three games off. And why should there be one?

Petersen’s recent success is not a knock on Quick’s play. Last night’s performance cemented that. When the Kings enjoyed their best run of success last season, in February and March, it was during a time when both goaltenders were playing well. If the Kings can get last night’s level of goaltending from Quick, and the recent run of goaltending from Petersen, they will have a chance to win on most nights moving forward.

From the net out, it was hard to really focus in on individuals specifically, because so many had good nights. We saw the best performance from the trio of Adrian Kempe – Gabriel Vilardi – Jeff Carter since that line was put together mid-game last week. Vilardi and Carter each earned power-play points, and we saw more sustained offensive zone time from them as a unit. Vilardi led all forwards in Corsi For last night while on the ice, while Carter continued his dominance of the Minnesota Wild, with now six points (1-5-6) from five games played.

The third line Anderson-Dolan and Moore, along with Carl Grundstrom, put in yet another shift. For the second straight game, no line created more high-danger chances than that trio, as they played the second most time at even strength of any of the four lines.

That last stat says even more than you might think. The lowest even-strength time on ice for one of the four Kings lines was 8:52. The highest was just 10:01. That’s just a 69 (nice) second difference between the top line, which was actually the Vilardi line, and the bottom line, the Lias Andersson line.

It was perhaps Quick, typically a man of few words, who put it best after the game. When the Kings have everyone involved, and play the right style of hockey, they can be a difficult team to beat.

“I think if you look at the wins we had this year, and going back to last year, that’s kind of the formula that’s worked the best for us,” Quick said. “When we have all four lines, six D, goalie, all playing the same way and breaking out, quick through the neutral zone, good at getting pucks deep, good at forechecking, we’re a really hard team to beat.”

The Kings capped off their homestand with a 2-0-1 record and five of a possible six points. That’s what you need to do to find success, take care of business on home ice. The three-game run has vaulted the Kings into sixth in the division, three points back of fourth place with a game in hand.

This afternoon, the Kings departed to begin a season-long, six-game road trip, beginning tomorrow evening in Arizona against the Coyotes. The Kings will play two games apiece against Arizona, St. Louis, and a Minnesota Wild team that will likely be back at full strength. There’s no “must get X number of points” mandate for this trip, but as the Kings get healthy, and have a full complement of players at their disposal for the first time in weeks, we’ll certainly learn a lot about what this team is, and perhaps what this team can be, over the next six games.