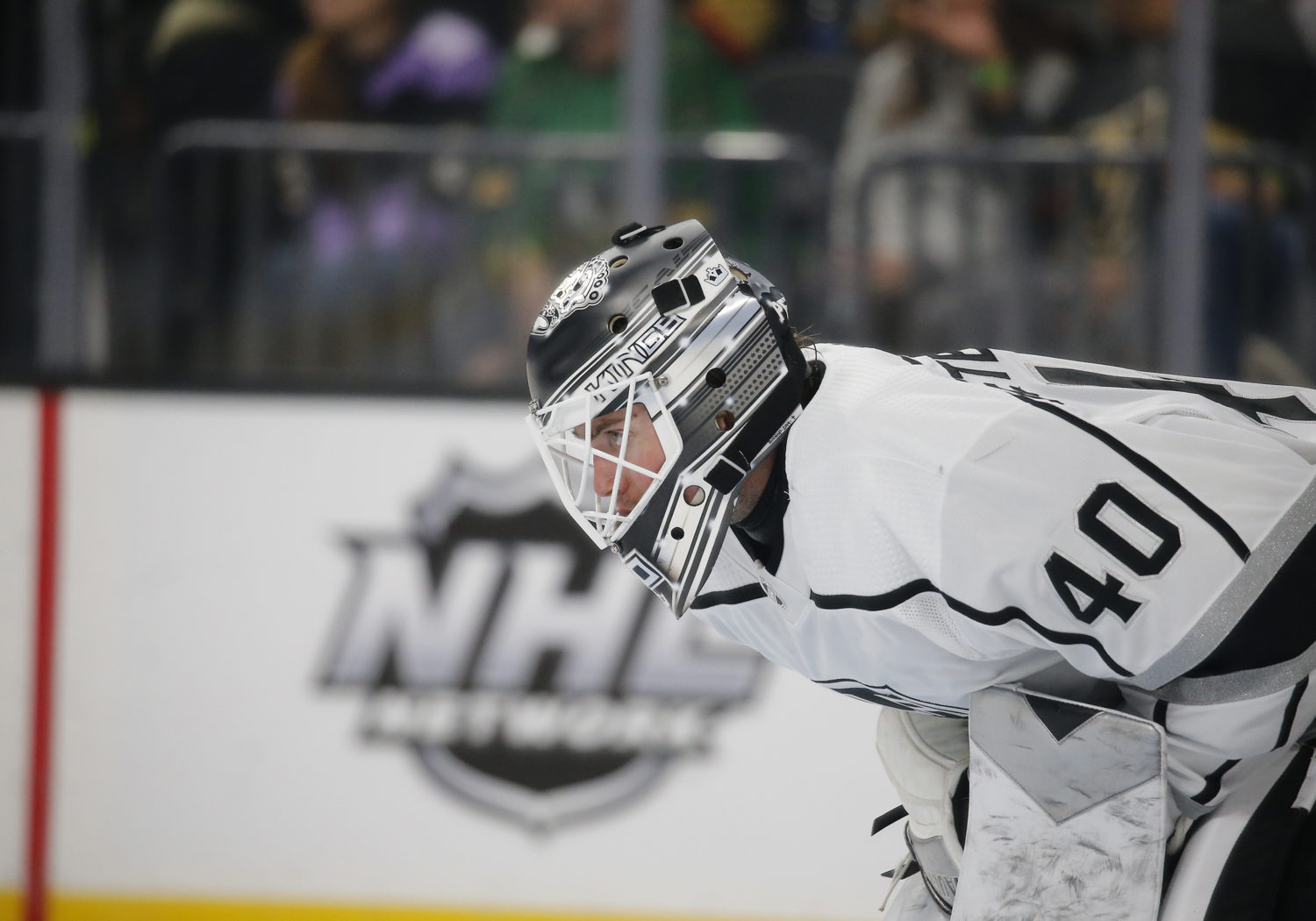 The LA Kings were back at full strength this morning in El Segundo.

Looking at how the Kings took the ice by jersey color, here’s my projection of the lines as it stands right now.

We’ll get to the forwards and defensemen in a bit, but let’s talk goaltending for a second.

It’s important to note that through 13 games, the starts in total have been just about even, with Petersen starting seven games and Jonathan Quick starting six. Todd McLellan has emphasized the importance of having both goaltenders moving forward, and with seven games coming up in the next 12 days, including a back-to-back in there, both Petersen and Quick will get starts moving forward.

It’s also not a negative reflection on Quick to say that Petersen has been playing well, and he has been. The Notre Dame product has started each of the last three games for the Kings, skating to a 1-1-1 record in those contests. Petersen has a .926 save percentage this season, ranking fifth amongst goaltenders with at least 400 minutes played. At 33.8 shots faced per 60, Petersen has been the NHL’s third most active goaltender as well.

After today’s practice, the Waterloo, IA native discussed his relationship with Quick, how he’s felt in net through eight appearances, the ways he’s handling the extended time off between games, and more.

Looking at the skaters, with the return of four regulars in the Kings lineup will need to come some difficult decisions with who exits the lineup.

The question, at forward, right now is how will Lizotte and Athanasiou eventually re-integrate back into the Kings lineup? The Kings ran the lines in gray and white in their most recent game, on Thursday against San Jose. Lizotte and Athanasiou, however, represent two players who have skated in the middle six over the team’s first seven games this season, with the Kings 3-2-2 when both players play.

That’s not to say that those players will be put back in, immediately, on Tuesday, as both players will need adequate time to get back up to speed after being out of team activities for more than two weeks each.

Similar questions will be asked on the back end, as Matt Roy and Sean Walker move closer to their respective returns. Roy has now skated in a regular jersey in each of the last three days, after he made his return to the full group in a non-contact jersey on Wednesday. Walker has skated each of the last two days in a non-contact jersey, with a full cage on his helmet. Both blueliners are regulars for the Kings on the right side, and who exactly they would slot back in for, amongst the younger defensemen currently flashing skill and promise, but also inexperience, remains to be seen. 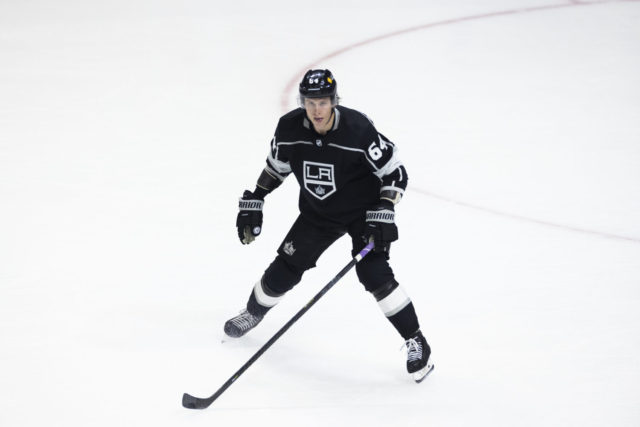 Two of the players in situations that could be impacted by those returns are forward Matt Luff and defenseman Austin Strand.

Matt Luff played in the team’s first two games of the season against Minnesota, before an injury sidelined him until last week. After he was activated from IR on 2/5, Luff returned to the lineup on Thursday, and was effective against San Jose, skating on a line with Austin Wagner and Lias Andersson.

Strand now has four NHL games under his belt. As has been written, Strand’s journey has been an exciting one. The 6-4 defenseman was an ECHL player in his rookie season, progressing all the way through healthy scratches in the AHL, to a regular with the Ontario Reign, to eventually making his NHL debut earlier this month in Vegas.

Strand has earned the praise of Head Coach Todd McLellan on multiple occasions, often unprompted, for what he’s shown in his short sample size so far. He’s been poised on the ice, especially when you consider his lack of NHL experience, and has made simple, effective plays with the puck.

Quotes from both Luff and Strand, from after today’s practice, below –

On getting back into the lineup after missing so much time due to injury
Overall, it’s good. Obviously it’s not what you want, two games in going down with an injury, but I mean [Chris Kingsley] and the staff did a good job making sure I could skate, stay in shape. When you’re not skating, it’s tough to come back, so luckily, I was able to stay home with Frky and Turcs, so my conditioning was good, and it felt good to be out there last game. I thought the first two periods looked good, got a little tired towards the end of the third, but overall, it’s good.

On things he picked up watching a game he’s not playing in
You kind of just watch the game from a higher angle, so you see how things develop and watch how plays come about. You see that top line – Kopi, Brownie and AI – they work so well defensively and offensively, and you watch the older guys like Carts. He’s one of the guys I’ve talked to more this year, just about what he does and what he did as a younger guy to get through, how he works. Watching the game up top, seeing how I have more time than I think, versus making a quick play, you just get to see if from a different perspective.

On what he’s learned from Carter, and their conversations
Just a bit of everything. Every game, he tells me to use my shot, and he’s been doing the same thing. Whether it was in training camp or games, he’s been shooting the puck. He only has two right now, but he’s a guy, in 50+ games, who can easily put up 20, with his speed it’s insane. I just talk to him about the ups and downs of it, and as a young kid, how to stay in the lineup consistently. How to create chances, you’re going to have to get some dirty goals, and he’s just easy to talk to. I really enjoy my conversations with him.

On the feedback he’s gotten through four games
I’ve been getting some feedback from the staff, [Trent Yawney] has been talking to me, every game he’s come up to me. We had a chat in the summertime about being consistent, that’ll help me to stay in the lineup. After game one he said that’s game on, let’s move on to game two, and then after game two, it was keep it going to game three and he’s just been sending that message, keep playing consistently and keep playing the way I’ve been playing. He’s said he’s been happy with it, and from the bench, I’ve been getting some positive feedback from Todd too.

On his passing, making quick, tape-to-tape passes
I’ve definitely been trying to think about that more, in my game. [Sean O’Donnell] was really hard on me for that last year, and [Mike Stothers and Chris Hajt] engrained that in my brain pretty hard. Just making crisp, good passes. I think it started in practice, I was getting a little bit lackadaisical, missing some passes, so that’s been a priority of mine. Making sure it’s on the tape most importantly with a nice flat, crisp pass.

On things he’s been working on in his game, and been told to focus on
Keep it simple, one hand on the stick in the d-zone, and certain little plays like don’t jump below the goal line when there’s a guy out in front in the slot…watch both sides, but the guy in front is more important than the guy down low. Reading the ice a little bit better, seeing what’s coming at me instead of just jumping down and making a pinch when I have a bunch of guys coming at me. Those are the kinds of things I’ve been keeping in mind, before games, trying to visualize those little things they tell me. 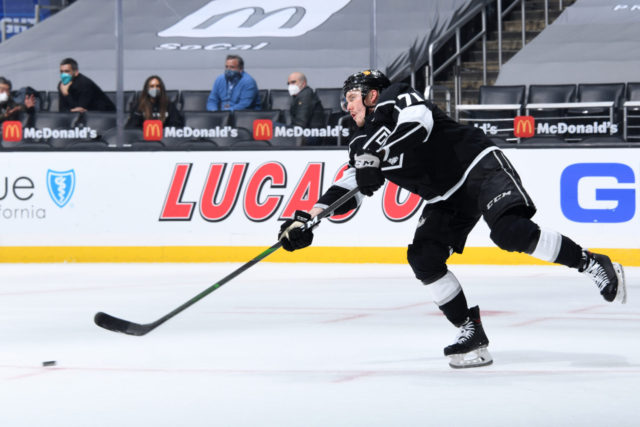 By Jack Jablonski
348 Comments
Behind the Scenes