Los Angeles jumped out to a three-goal lead early, and fired off three additional goals in the third period, to leave no doubt in a 6-2 win over the San Jose Sharks, earning three of a possible four points from their two-game set.

“I can’t remember doing that in a long time,” Todd McLellan said, of winding down a four-goal lead. “We’re so accustomed to playing one-goal games, you don’t get the freedom to play out a lot of nights, but we earned the opportunity to do it tonight, and the best thing about the last nine minutes was how we played it. We didn’t get cute, we didn’t get lazy, we didn’t get sloppy, we played the right way, so that was rewarding for the group as a whole.”

If you think about it too, the Kings really weren’t that far off from getting their first sweep of the season. Despite a first period that left a lot to be desired on Tuesday, the Kings fought back and swung a 2-0 deficit into a 3-2 lead. The Kings held that one-goal lead for much of the final frame but were unable to close the game out late.

Could you say that the Kings were one Drew Doughty injury away from earning a sweep? You wonder if the veteran on the backend might’ve been able to help close things out in the final minute. The Kings were what felt like inches away a few times throughout overtime and the shootout as well, but that’s how it goes sometimes.

Doughty’s presence was especially felt on the power play, as the Kings converted three times on the man advantage. The 31-year-old blueliner now has eight power-play points on the season, tied for the second-most amongst defensemen leaguewide and ranking inside the NHL’s Top 10 amongst all skaters.

“Throughout my 12 years here in LA, I’ve had confidence we’re going to score in the past too, but when we go out on that ice right now, you really feel it,” Doughty said. “We have threats from every single position. Not that I’m saying we didn’t in the past, we did, but there’s just a different feel. We feel dialed in, we feel connected. Todd is so good at coaching, plus Sturmy on the power play, we’ve put a lot of emphasis on it. Power play has been great, every single guy is doing their job and we need to keep doing it in order to win games.”

Doughty has helped lead the way, along with the usual suspects, but it wasn’t just the big guns against the Sharks that contributed.

Okay, it certainly was SOME of the big guns – Dustin Brown had four points from two games, while Anze Kopitar and Alex Iafallo also had points in both games. That trio carried the team back on Tuesday, scoring all three goals as a two-goal deficit became a one-goal advantage.

Two days later, it was a more complete effort.

“Structurally, we played well, everybody was important, we had the opportunity to roll four lines. I thought we played aggressively, we kept plays alive……when you can effectively use four lines and six defensemen, and they feel confident, it makes a world of difference.”

That was the quote from McLellan after Thursday’s win. The Kings got offensive-zone time from all four lines, the ability to play extended stretches at 5-on-5, and impose their style of play at even strength, was a noticeable difference from some past efforts in the string of five consecutive losses.

Looking at specifics though, McLellan felt the Grundstrom – Anderson-Dolan – Moore line had a more effective night on Thursday. Focusing on Tuesday’s game, the effort and hard work was there, but it didn’t necessarily translate into scoring opportunities. Fast forward two nights, and the three names atop the high-danger chance totals for the Kings, and the three names that factored into two even-strength goals, were the three names listed on the new-look third line.

Last night was a major step forward for that trio, as they still brought what we had all seen with the eye test – the energy, the hard work, the aggressiveness – and took the next step forward. They turned it into not only quality scoring chances, but quality goals. Good on them.

Looking at the larger picture, if I had told you that the Kings would have had a five-game losing streak inside their first 13 games of the season, and won consecutive games just once, yet still be just four points out of a playoff spot with two games in hand, would you have believed me?

I’m not sure if I would have believed me. Yes, there are other teams between the Kings and fourth place. Yes, games in hand are only meaningful if you win those games in hand and yes, with the current rate of games being canceled, points percentage could very well become the defining standings metric this season, as opposed to total points.

However, regardless of how you shake things out, the Kings are in the thick of things as they approach the quarter-season mark on Tuesday against Minnesota.

The Kings are off today and will return to the ice tomorrow morning at 10:30 AM at Toyota Sports Performance Center. 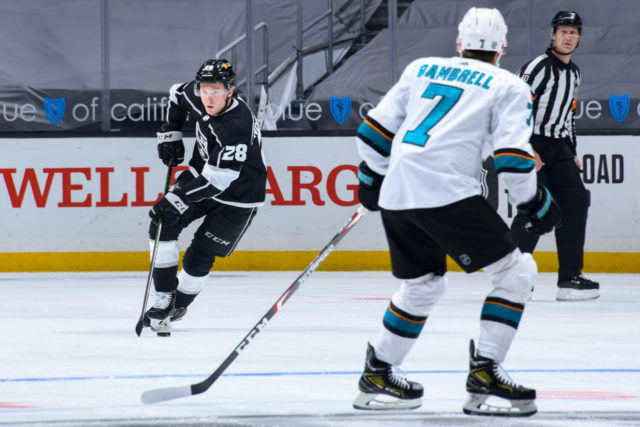