After a disappointing last night against Anaheim, the Kings came to the rink to work this morning at Toyota Sports Performance Center.

Today’s focus was on things that Todd McLellan feels the team did not do in last night’s game.

“We worked today in practice,” McLellan said. “We did some of the things in practice today that we didn’t do last night, and tomorrow will be back to structure and that type of stuff. We needed to be reminded of what it was like to compete, to work, and we got that done today.”

Today’s practice included focus points of compete, intensity, competitiveness, and the like. Choose the synonym that best suits you, but the focus was clear.

It all started for the group with rewatching some of the video from the game last night. Last night’s loss was not a throw out the tape and move on kind of loss, as McLellan emphatically clarified this morning. The video was important, in McLellan’s mind, for showing different points of the game that

“The best thing we did was review some of the video,” he explained. “The puck doesn’t care who gets to it first, it’s still going to lay there and we weren’t too aggressive in terms of getting to loose pucks real quick. We didn’t handle it well once we got there, we weren’t aggressive to defend. We basically were a boxer who was taking punch after punch and that’s not how our team plays and will play.”

McLellan talked yesterday about how the Kings struggled to handle Anaheim’s heavy forecheck, and that the team was not completing first passes out of their own end, let alone second and third passes to move the puck up ice.

This resulted in extended shifts in the offensive zone by the Ducks. When asked about whether the Kings addressed that specific focus during today’s skate, McLellen responded that they “certainly did”.

In terms of personnel, everyone who was expected to skate today was accounted for. In terms of the active roster and taxi squad, only Matt Roy did not skate, while forward Matt Luff went again in a regular jersey.

One of the questions moving forward will be how Todd McLellan and his staff approach line combinations. As McLellan mentioned in last night’s postgame availability, the Kings entered the game happy with the potential line combinations, but things changed as the game wore on.

Will the staff keep the original combinations, that began yesterday’s game, together? Or will they look to make changes moving forward? With Martin Frk’s likely availability, Matt Luff not far behind, and how last night’s game went, signs point towards the latter. Frk skated alongside Adrian Kempe and Gabe Vilardi earlier in training camp, before he suffered his groin injury in early-January, a line that had some success together last season. More on Frk’s return below.

As the team moves forward into a two-game set against Vegas, followed by four home games the following week, building off of those themes, and maintaining accountability throughout the lineup will be key points of focus. 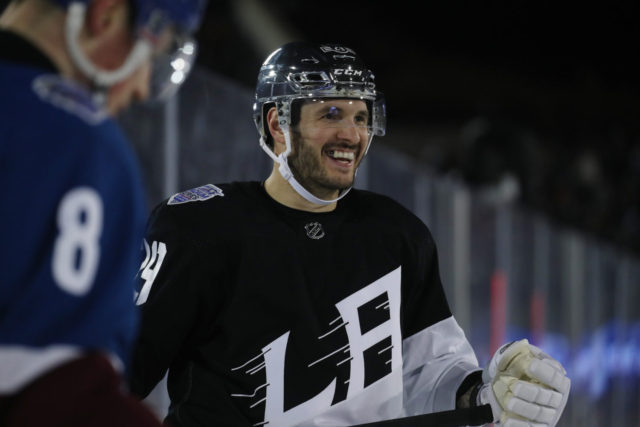 Accountity From Olli
If we’re looking for accountability, look no further than Olli Maatta.

It’s safe to say that expectations were high for Maatta, as he joined the Kings this offseason from the Chicago Blackhawks. The veteran blueliner was slated alongside Drew Doughty on the Kings’ top defensive pairing, and he played there for the first four games of the season before a reshuffling on the blueline led to Maatta on the outside looking in for all four games on the team’s most recent road trip to St. Louis and Minnesota.

It was a humbling experience for someone not used to not playing, and a challenging one, as it would be for any player. Players want to play, and for a guy like Maatta, his expectation here was to be a big part of what the Kings are doing.

“It’s not fun. You want to be playing, that’s the thing,” he said after today’s practice. “At the end of the day, at that time, [I was] just watching the games and keeping an eye on it, trying to learn all the time, work on getting used to the systems and learning about it, it has to come naturally out there. You can’t be thinking too much and I think at that point, I was trying to make the best out of the time I had.”

Perhaps the transition to the organization, and to how the Kings want to play, was a bit more difficult than Maatta, or any of us, thought it would be.

It wasn’t the first trade for the Finnish blueliner, he switched jerseys from Pittsburgh to Chicago just this past offseason. But, for whatever reason, it didn’t come together instantly for Maatta with the Kings.

He admitted that expectations were high coming in – something that was a theme across the Kings landscape. There was a ton of buzz surrounding a potential Maatta – Doughty pairing, that didn’t quite come together as quickly as expected. Maatta spoke candidly today about those expectations, and the struggle to settle in right away in his new environment.

“Yeah I sure did,” he said when asked if he had a more difficult transition than expected. “Obviously, expectations were high coming in, but definitely I had a bit of a hard time adjusting it, and thinking too much, that was the thing. I was thinking too much out there, I’ve just got to go out there and play. If you think, you hesitate a little bit, that’s going to cost you a lot of times.”

Right now, it’s about Maatta himself.

At this stage, it’s not about chemistry with other players, it’s about making sure that he’s the right partner for Doughty or anyone else on the blueline. For Maatta, he knows that he needs to focus the most on getting his own game to where he wants it and believes that when he does, he’s the kind of player who can make his teammates better.

“I think that’s what it is,” Maatta said. “I think it’s just trying to find my own game, that’s the biggest thing. I want to contribute, I want to be a big part of this team. That’s the way I’ve got to do it, just working and focusing on it. Obviously, I think when I do that, I make other players around me better, so that’s the biggest focus for me right now.”

Just About Frk’n There
Martin Frk completed what would be his fourth consecutive practice day, if you include yesterday’s morning skate, with the team. Frk also took warmups last night but was not in the lineup against Anaheim.

After suffering a groin injury early in the Black – White scrimmage back on January 9, it was going to take a few skates to get back up to speed. McLellan said this morning that he feels Frk is trending towards a return to the lineup, and our first chance to see the hard-shooting winger back in game action could be on Friday against the Golden Knights.

For his part, Frk says he’s felt good thus far in his return to practice and thinks he is ready to go as soon as he is given the opportunity.

“It’s been good, with all the protocols with the groin, it feels good,” Frk said. “It’s nice to be with the guys again, skating, I missed them when they were on the road trip and I had to stay here. It felt good, I feel ready to go and I’m really excited to start playing soon.”

At the beginning of training camp, Frk skated on a line with Adrian Kempe and Gabe Vilardi, a unit that was together at the end of the 2019-20 season as well. In the ten games in which Vilardi played at the NHL level, the linemates complimented each other well, combining for 17 points together.

Frk indicated today that while he loves playing with those players, he understands that decisions around that are made by the coaching staff, and he’s ready to roll regardless of where he is slotted.

“I don’t know where I’m going to play, it can change daily here, but whatever line they put me on, I’ve just got to use my tools and do what I’m good at and help the team to win games,” Frk said.

Though he has missed now close to a month of full-team practices, Frk began skating at TSPC while the team was in the Midwest. He feels that those skates were difficult, but set him up well to return to the main group this week.

“When I was skating with the [full group], I didn’t feel too far behind, so that was pretty good for me,” he said. “We’ve just got to practice, work on our details a little bit more and we have the two games against Vegas, they’re always good, will be a good test for us. We definitely need to bring some points back home.”

It’s now been back-to-back games that Kurtis MacDermid has dropped the gloves off the opening faceoff. First, it was against Marcus Foligno in Minnesota, and last night it was a rematch against Nicolas Deslauriers of the Ducks.

McLellan made it abundantly clear that he would never ask a player to fight for the team off the opening draw like that, and that the decision to do so lies with MacDermid, and him alone.

“Dermy is a tough, tough player, and when you’re one of the toughest, or at the top of the pecking order, people want a shot at you to prove that they belong in those categories,” McLellan said. “The last two players that he got involved with was right at the beginning of the game. They were trying to set the tone for their team, and Dermy was doing the same for ours. Obviously, Minnesota and Anaheim responded better than the LA Kings did on both of those nights.”

MacDermid has filled the role of the “modern enforcer” for the Kings.

Gone are the days where a player is dressed strictly to fight, and that player logs say five minutes of ice time, equal to his number of penalty minutes.

MacDermid fills a valuable role for the Kings on the blueline, providing defensive-zone ability, physicality and a disrupting presence on the penalty kill. The toughness is there, the fighting ability, when needed, is there, but it’s not the reason he is a part of the lineup night in and night out.

“He plays 17, 18 minutes a night for us and the old, pure fighter that rode shotgun on the bench never played those minutes,” McLellan said. “Bob Probert, Joey Kocur maybe a little bit, they were scoring a lot of goals, but the actual enforcer didn’t do that. Dermy is here for a lot more things than the fighting. He’s a physical player in the corners, he penalty kills well, he blocks shots. He breaks plays up, he’s a great teammate, keeps teammates honest, keeps them safe, I could go on and on. There’s times when he may not be making the prettiest play, but I can’t tell you how much he means to our group over and above the fighting.” 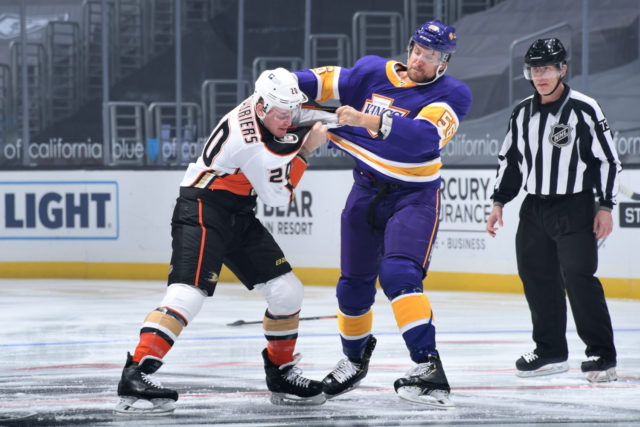 The Kings are scheduled to skate tomorrow at 11 AM at Toyota Sports Performance Center, before traveling to Vegas in advance of Friday’s game. More to come on Arthur Kaliyev, and his dynamic debut, later today!