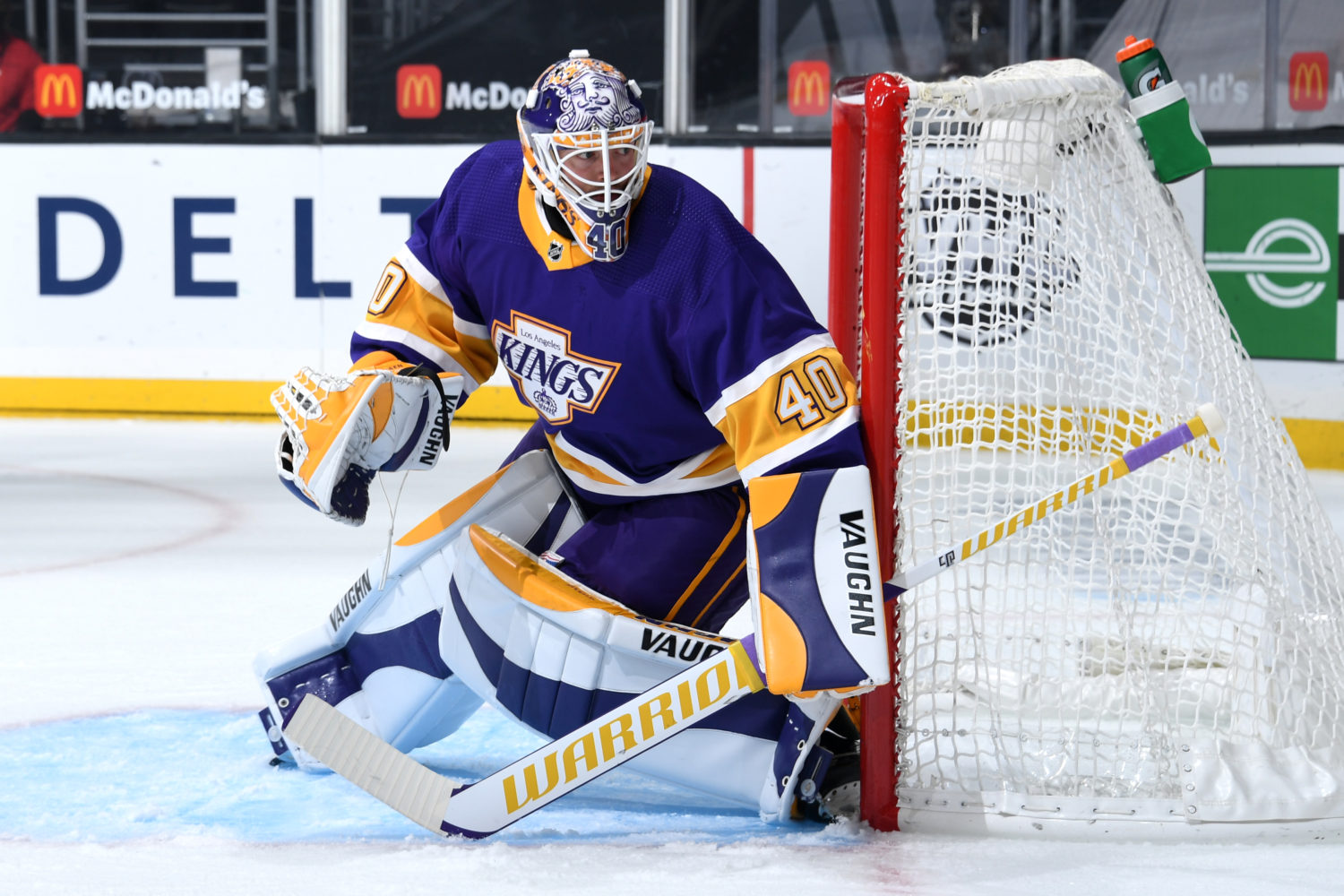 Sometimes it’s not your night, and last night was not the LA Kings’ night.

As a team that is. If we’re looking at Cal Petersen, it was his night, as the netminder made 40 saves on 42 shots faced to keep the team in the game for 59 minutes. It was Arthur Kaliyev’s night too. The 19-year-old forward moved himself into exclusive company, debuting for the Kings as a teenager, and scoring in his first NHL game with the franchise as well.

Those two provided bright spots, as did a couple of other individual players – I thought Alex Iafallo had a strong game as well, and the left-winger was one of two Kings players, along with Anze Kopitar, to have more shot attempts for when he was on the ice than against. Overall though, the Kings were outplayed, in all aspects, during last night’s game by their rivals from a few freeways over.

The Ducks generated offensive chances throughout the evening, including several extended stretches in the offensive zone, while the Kings were only able to match in small flurries. When the clock hit zero, Anaheim outshot the Kings by a 2-1 margin, and the shot attempt differential was even higher.

“20 players,” Todd McLellan said, when asked what was missing last night. “They were better than us in every aspect of the game. To get whatever we did, 20 shots on goal, was actually fortunate for us. We didn’t have the puck much off of faceoffs, we didn’t execute when we won, we didn’t handle a heavy forecheck, we didn’t create a forecheck on our own, we didn’t sustain any offensive zone time at all. So that pretty much sums up how you end up on the shorte end of a shot total.”

For the first time this season, the Kings did not play a two-game set against an opponent, and unfortunately, it came on a night when they probably would have wanted another crack most of all. Last night we did not see many of the positive signs from the recent road trip, as the Kings did not have enough of the puck over the course of the 60 minutes to have a claim at victory.

There were excuses to be made, if McLellan wanted to make them, but he was having none of it. The Kings were without four regulars, with Andreas Athanasiou and Blake Lizotte on the COVID-19 Protocol List, and Matt Roy and Sean Walker out injured. As McLellan made very clear though, this is not strictly an LA Kings issue, this is something that teams around the NHL are dealing with this season.

“We can’t use injuries or COVID [Protocol] as an excuse, the whole league is going through it,” McLellan said. “Get over it, shut up and play.”

The Kings struggled to handle an aggressive and heavy forecheck from the Ducks, who entered last night’s game offensively challenged, but seemed to be full of confidence inside the offensive blueline at STAPLES Center. I mean, Max Comtois attempted the Michigan midway through the second period, playing for the team with the fewest goals in the NHL. The Ducks did not lack confidence last night, and were able to impose their game on their rivals.

The Kings struggled with completing passes, especially in their own zone. The Ducks brought a strong forecheck to the Kings and the hosts were unable to complete the necessary passes to beat it, and found themselves repeatedly hemmed into their own zone throughout the evening.

“They threw a heavy forecheck at us, and we didn’t handle that additional eyes up play,” McLellan said. “We get the puck, we get our eyes up, we’ve got to make that first pass and then connect from there on the way out. We couldn’t make the first one, so don’t worry about the second or third, they didn’t exist. Even when we had open ice, I thought we telegraphed a lot, I thought they could read off of our vision, get sticks in the way.”

Though he was sure to credit the gameplan, and execution, of Anaheim, McLellan made clear that a lot of the blame also falls with the Kings.

“There’s 20 players, capable of playing a lot better than they did tonight, so that’s disappointing,” he added.

The player of the 20 with perhaps the least improvements was probably Cal Petersen, who McLellan said that the Kings were lucky to have last night.

The heavy workload was nothing new for the Notre Dame product, either. He’s now faced 40+ shots three times in his short NHL career, but seeing a ton of rubber is nothing new if you watched his performances in the AHL with the Ontario Reign.

Petersen frequently saw high shot totals – he led the AHL in saves and shots faced last season at the time of his callup to the NHL – and even turned in a few 50+ save efforts with the Reign over the last two seasons. I asked Petersen last night if it can be easier for him to find his groove and get dialed in the way that he was, when facing a higher quantity of shots, and he called the situation a “blessing and a curse”, with some explanation.

“In a way. You definitely get warm quicker, you’re not spending a lot of time down there and thinking or anything like that,” he said. “When you’re facing a barrage, you’re always locked in and in a way it’s nice. Obviously, it makes for some more work, and it puts pressure on our D, and I think the forwards would say that’s not the end they want to play in. It’s kind of a blessing and a curse, but for me, it’s whatever’s thrown at me, it’s nice to get in a groove and stay warm.”

Over his last two games, Petersen has stopped 72-of-75 shots, good for a .960 save percentage. Two games is two games, but Petersen has seemingly found his groove after returning from the COVID-19 Protocol list, where he began the season.

The Kings are back on the ice later today, and we’ll have coverage of that practice, plus a feature on Arthur Kaliyev’s NHL debut, coming up later today!