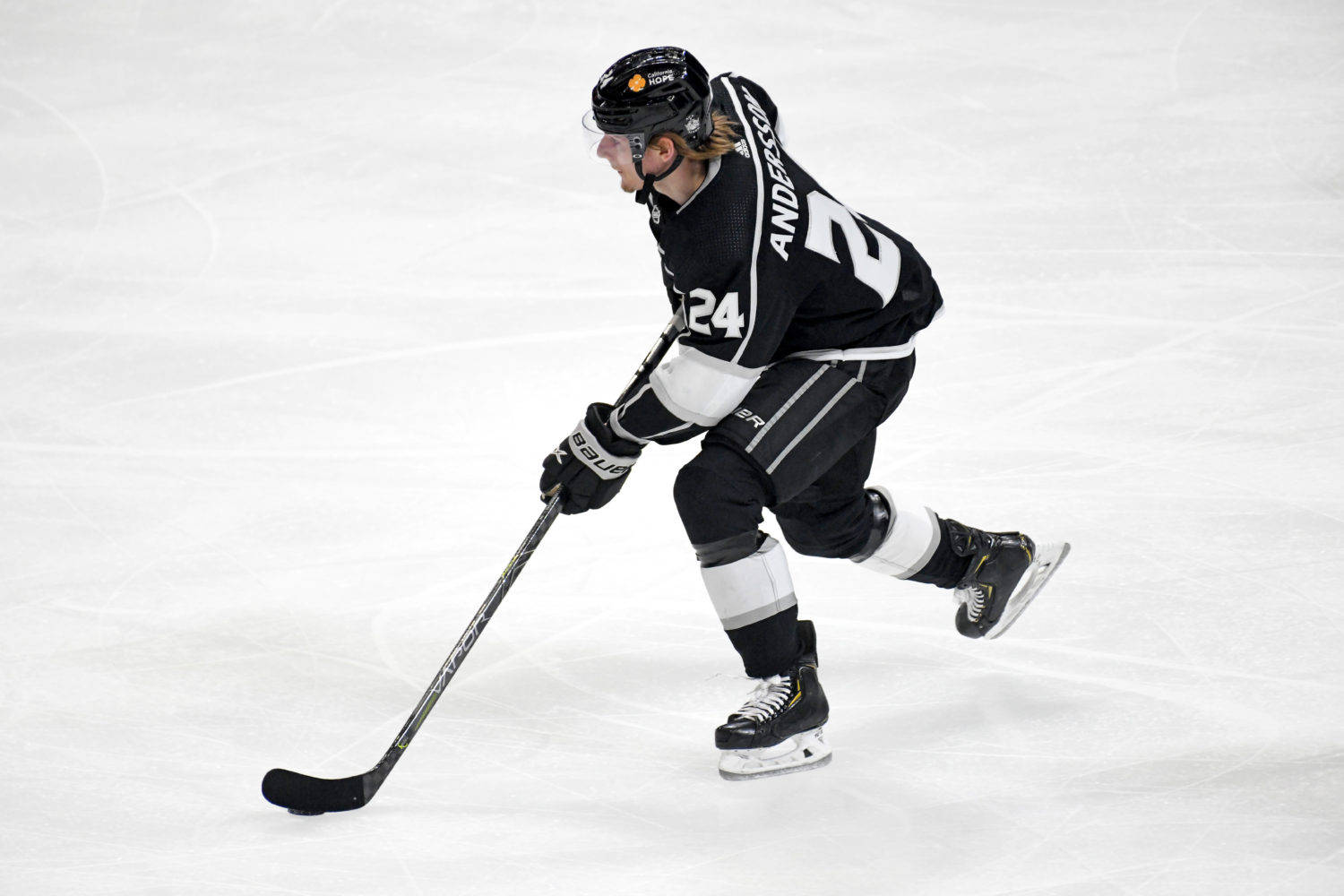 As expected, the LA Kings announced several roster moves in advance of tonight’s game against Anaheim.

Defensemen Mark Alt and Austin Strand, as well as forwards Lias Andersson and Arthur Kaliyev, have all been activated from the taxi squad and are eligible to play tonight against the Ducks. Forward Boko Imama and defenseman Sean Durzi have also been recalled from Ontario and added to the taxi squad.

Additionally, the Kings have activated forward Martin Frk from injured reserve, adding him to the active roster, and placed defenseman Sean Walker on injured reserve, retroactive to January 16, as well as placing forward Blake Lizotte and Andreas Athanasiou on the injured/non-roster list. The Kings also activated Alex Turcotte off of the injured/non-roster list and assigned him to Ontario (AHL)

Alt has appeared in one game so far this season with the Kings, opening night against Minnesota, and has moved between the active roster, taxi squad and Ontario Reign roster since then. Strand has yet to appear in an NHL game, but has spent time on the taxi squad so far this season. This would be his first recall to the NHL active roster so far in his professional career.

In terms of Andersson, he’s approaching the league lead in roster moves. The 22-year-old forward has skated in each of the last six games for the Kings, but has been shuffled between the active roster and taxi squad in between those games.

Kaliyev began the season in the AHL with the Reign, and skated in the team’s full complement of preseason games. The 19-year-old winger has three goals from five AHL exhibition games so far this season. Kaliyev would be in line for his NHL debut tonight, assuming he plays against the Ducks. More on Kaliyev, in advance of said debut, here. 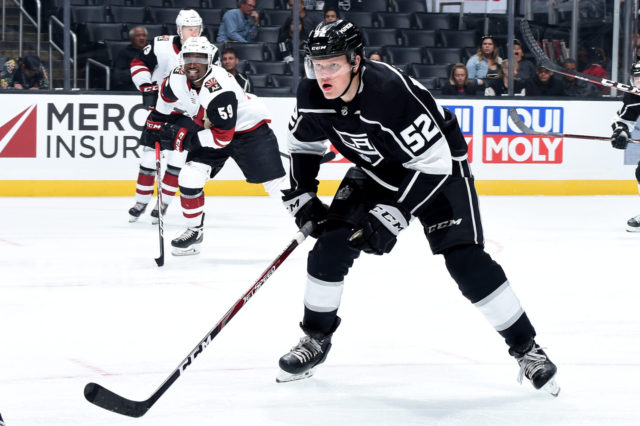 Regarding Turcotte, when was the last time you saw the LA Kings most recent four first-round draft picks on the same Ontario Reign roster?

If your answer was never you’d be correct!

Turcotte has yet to skate with the organization at either level so far this season, after he was designated as injured/non-roster during training camp. The Wisconsin native suffered a lower-body injury during the gold-medal game at the 2021 World Junior Championship against Canada, a game in which he also scored the game-winning goal. Turcotte, along with fellow Kings prospects Arthur Kaliyev and Brock Faber, won gold medals, as Turcotte and Kaliyev tied for second on the team in total scoring. 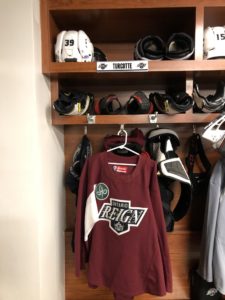 The activation is a big step for Turcotte, whose first practice with the Ontario Reign is nearly 11 months in the making. On March 11, 2020, Turcotte signed his entry-level contract with the Kings, after his freshman season at Wisconsin, and was slated to join Ontario the following day on an ATO. Although he arrived at the facility for his medicals and other behind the scenes work, Turcotte never actually suited up for the Reign. All we’ll have are the memories of his stall and the thought of what could have been in adding him to the mix for a potential Reign playoff push.

Turcotte is reunited with Head Coach John Wroblewski, who he worked with extensively while with the United States National Team Development Program. Wroblewski, from an interview with The Athletic’s Lisa Dillman, talked about Turcotte’s development from the time he joined the USNTDP as a 16-year-old, to where he’s at now.

“It’s a tough one because he’s still very much the same young man, hardworking and respectful,” Wroblewski said. “His confidence is cemented is how I’d like to put it. He’s always had belief in his game and belief in himself. Teenage years are hard on everybody. He’s looking around the room and trying to figure out where he fits in amongst Jack Hughes and Trevor Zegras. He has a strong belief in who he is as a person and who he is as a hockey player. From the time we got him, he was a selfless player. He was a leader. And he was a fiery player. That’s still who he is as a player.”

ONTARIO, CA – The LA Kings, NHL affiliate of the Ontario Reign, have activated forward Alex Turcotte from the injured/non-roster list and assigned him to Ontario.

Turcotte, the fifth-overall selection in the 2019 NHL Draft, signed with the Kings in March 2020, after he completed his freshman season at the University of Wisconsin (NCAA). The 19-year-old forward posted 26 points (9-17=26) in 29 games with the Badgers to rank third on the team in points (26) while also tying for third in both goals (9) and assists (17). His .897 points-per-game also ranked second on the Badgers and sixth among college freshmen nationwide.

Prior to joining Wisconsin, the native of Island Lake, Illinois played two seasons with the United States National Team Development Program (USNTDP). The 5-11, 190-pound forward appeared in 95 games with USNTDP where he registered 125 points (45-80=125) between the Under-17 and Under-18 teams. In 2018-19, his 1.68 points-per-game ranked second among all skaters while his 80 career assists is tied for 10th in program history.

Internationally, Turcotte has represented Team USA on four separate occasions, playing in the IIHF World Junior Championship in 2020 and 2021, as well as the IIHF Under-18 Men’s World Championship in 2018 and 2019. After he tallied two points in his first World Juniors in 2020, Turcotte won a gold-medal, as an alternate captain with Team USA in 2021. The 19-year-old forward was also tied for second on the team with eight points (2-5-8) from seven games played. 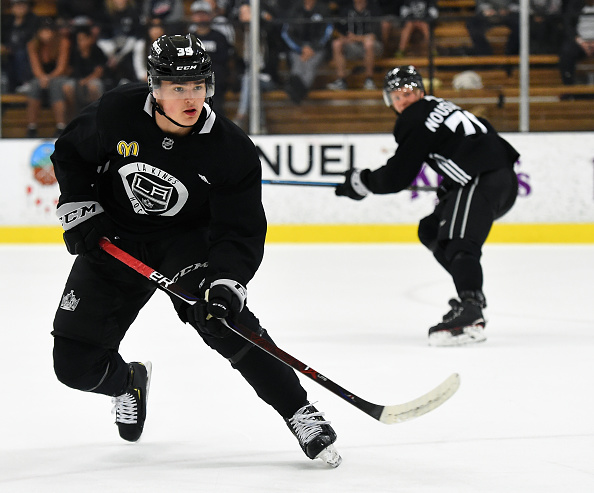 We're not done yet, Insiders! The LA Kings announced this afternoon that forward Trevor Moore has signed a two-year contract extension,