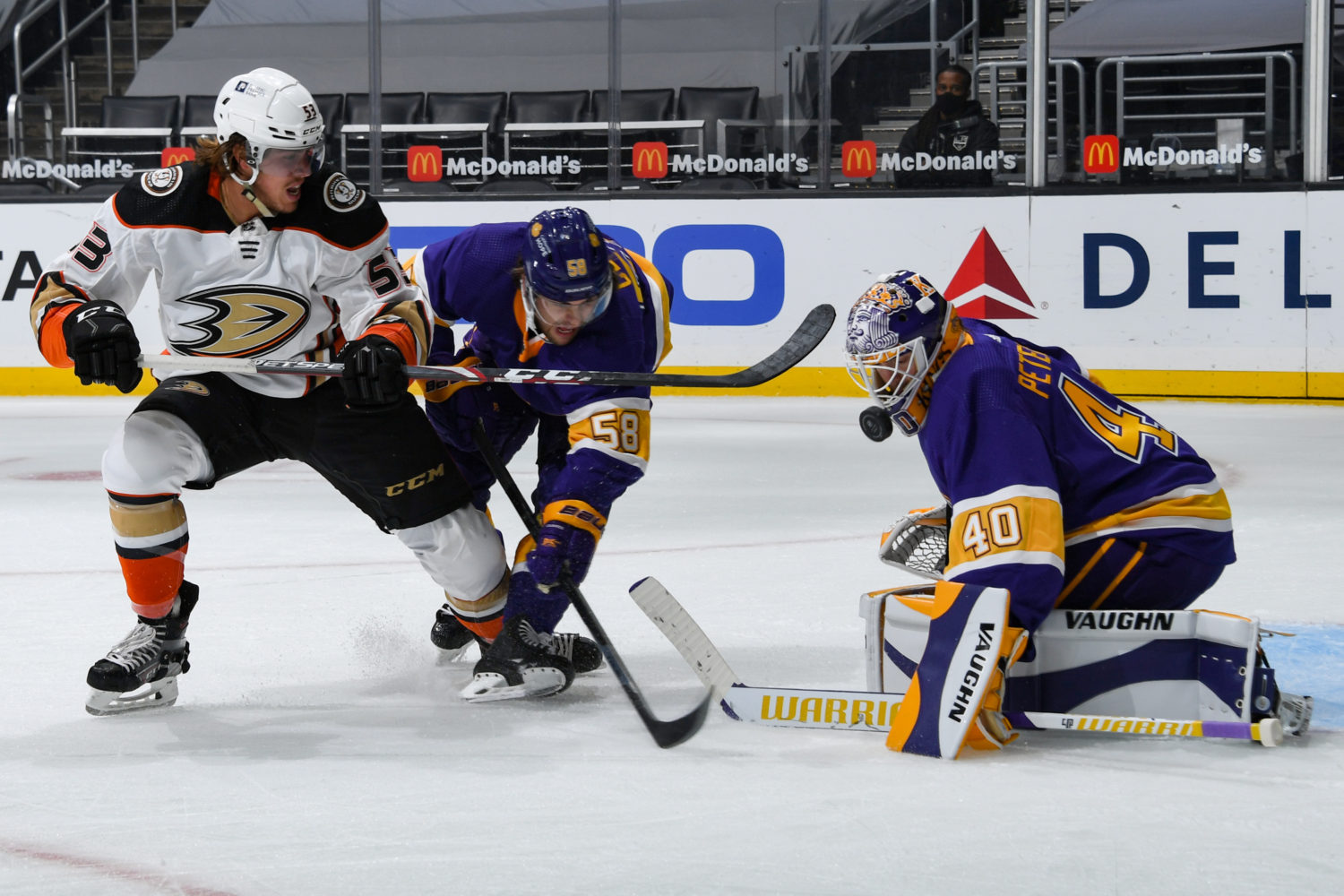 The LA Kings were unable to build off of some positive signs from their recent road trip, as they fell by a 3-1 final against the Anaheim Ducks on Tuesday evening at STAPLES Center.

The Kings were outshot by a 43-21 margin, with shot attempts at 70-32, as the Ducks generated extended stretches in the offensive end that the Kings couldn’t match on a consistent basis. The Kings few true quality opportunities and were unable to really generate the offensive chances to fight back after going down by two goals.

The Kings did have a pair of pretty large bright spots, however, including Arthur Kaliyev’s first career NHL goal, in his first career NHL game, as well as a 40-save performance from Cal Petersen in net. Petersen’s standout effort kept the Kings within striking distance throughout the game, though they could not pull a goal closer than Kaliyev’s second-period tally.

Anaheim got a Gordie Howe Hat Trick from forward Nicolas Deslauriers, who capped off the game with the empty-net goal, after starting it with a heavyweight bout against Kings defenseman Kurtis MacDermid. David Backes and Danton Heinen also scored for Anaheim, while John Gibson earned the victory with 20 saves in net.

Hear from Petersen, Kaliyev and Todd McLellan after tonight’s game.

On his feelings after his debut and first NHL goal
It was a really special moment, getting the first one. You never forget those moments, getting your first goal. I thought it was a pretty good game, a lot of nerves at the start of the game, but I tried to play my best out there and picked up a rebound goal.

On when he started to shake the nerves and settle in
I was just trying to get used to the game pace, and get involved in the game more, try to get more up to speed. I think every shift we got better as the game went on.

On what he saw on the play leading up to his goal
Drew was skating down the wall, and I saw that I was the third man high. I saw [Amadio] get it off the pad and I thought I was going to see a rebound there. Next thing I knew, I got lucky enough that the rebound popped right to me and I was able to bury it.

On what caught him most by surprise about an NHL game
Just more game speed, more physicality, more skill guys out there, of course. I think pretty much that’s what I’ve noticed so far.

On what was missing tonight from the Kings
Well, 20 players. They were better than us in every aspect of the game. To get whatever we did, 20 shots on goal, was actually fortunate for us. We didn’t have the puck much off of faceoffs, we didn’t execute when we won, we didn’t handle a heavy forecheck, we didn’t create a forecheck on our own, we didn’t sustain any offensive zone time at all. So that pretty much sums up how you end up on the shortend of a shot total.

On Arthur Kaliyev’s game tonight
He’s a young player, he was excited to play and the guys were excited for him and that gave us a little bit of life and a little bit of energy. When a 19-year-old can come in and do that, he’s obviously dangerous when he’s got the puck in and around the net, he had some other chances, more than a lot of our other forwards that played tonight. A good start for him and he’ll learn his way through the league. It’s no different than Gabe, it’s a hard league, it’s not going to come easy, that’s part of cutting your teeth.

On younger players stepping into larger roles, and overcoming guys missing from the lineup
Some of these young kids – I consider Gabe and Arty young kids – but Clague, Grundstrom, those types of players, they’ve been in the organization for a little while. They may be young when it comes to their NHL career, but they’re not for pro experience. They’ve got to find a way to contribute, and the leadership has to be better. We have to be better prepared, and ready to play, and that falls on the coaching leadership, I fall into that pot too. We can’t use injuries or COVID [Protocol] as an excuse, the whole league is going through it. Get over it, shut up and play.

On Cal Petersen’s play tonight
He was our best player, and we’re lucky we had him in there tonight

On execution in the passing game tonight
They threw a heavy forecheck at us, and we didn’t handle that additional eyes up play. We get the puck, we get our eyes up, we’ve got to make that first pass and then connect from there on the way out. We couldn’t make the first one, so don’t worry about the second or third, they didn’t exist. Even when we had open ice, I thought we telegraphed a lot, I thought they could read off of our vision, get sticks in the way. We also, them being a rival, we have to give them credit. They played a hell of a game, they were in good positions, they played hard, they did what they needed to do to win. They got in the way and we didn’t have an answer for it. A lot to work on.

– Forward Arthur Kaliyev made his NHL debut this evening and became the 21st LA Kings player all-time to score in his debut with the team. Kaliyev joined Gabe Vilardi, Carl Grundstrom and Anze Kopitar as current teammates who achieved the same feat.
– The 19-year-old skated 14:42 in his NHL debut, including 54 seconds on the power play, and became the 20th youngest player to debut for the Kings (19y, 221d), the 23rd teenager in franchise history.
– Goaltender Cal Petersen made 40+ saves for the third time in his NHL career. Petersen’s 40 stops tied Jonathan Quick (1/16) for the most in a game this season and were just three saves shy of his previous career-high of 43 (12/11/18 @ BUF).
– Drew Doughty collected an assist tonight, giving him points in back-to-back games (1-2-3). Doughty now has six points over his last six contests (3-3-6).
– With the primary assist on Kaliyev’s goal, forward Michael Amadio now has points in back-to-back games (0-2-2)
– Tonight was just the 12th time in the last 32 games between the Kings and the Ducks that was decided by more than one goal.
– For the eighth time in nine games, the Kings allowed the game’s first goal.

The Kings are scheduled to return to the ice tomorrow at 11 AM at Toyota Sports Performance Center for a team practice.