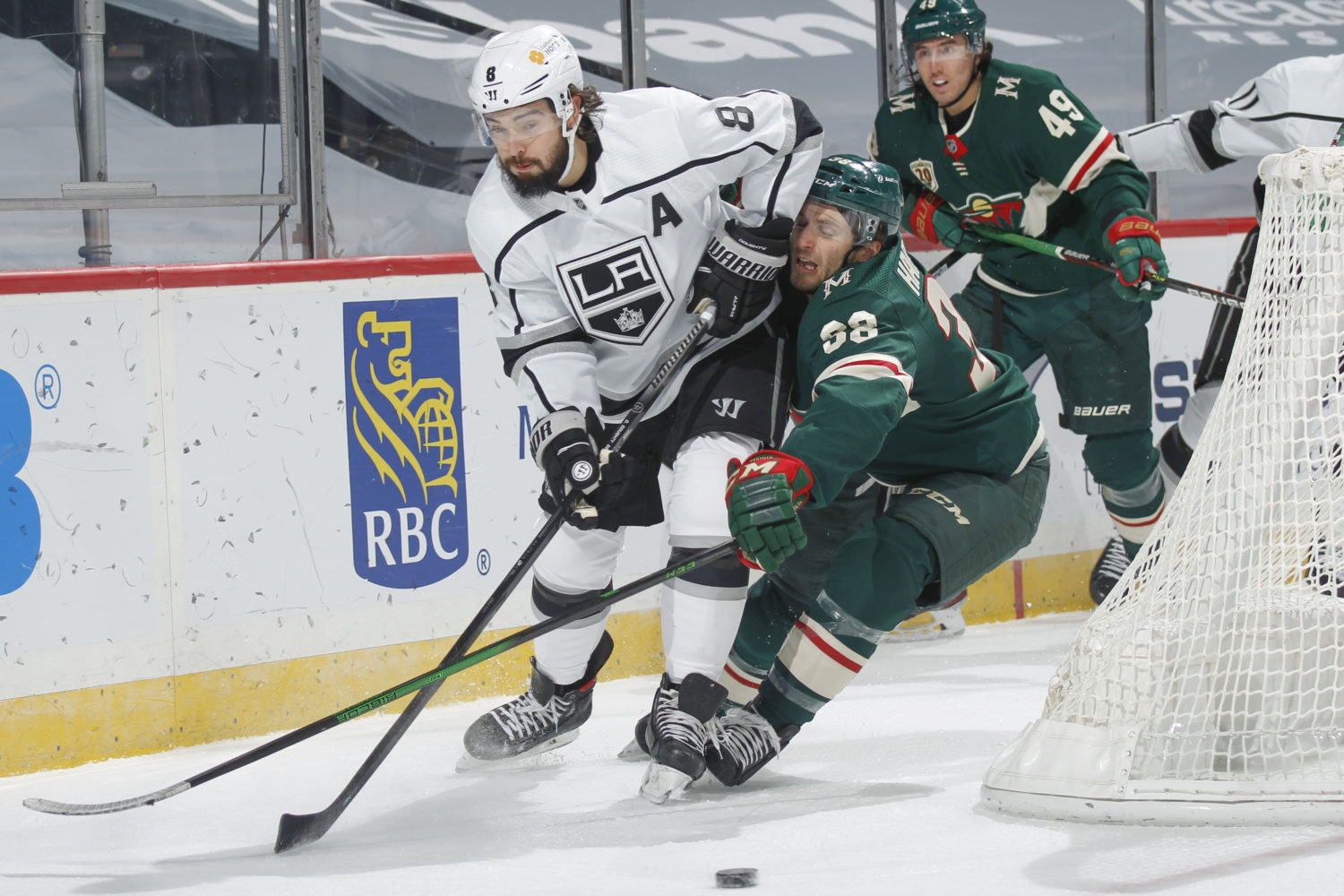 Of all the LA Kings series to date, this feels like the hardest one to analyze.

On one hand, the end result mirrored what we saw from the first three two-game sets this season – The Kings earned two of a possible four points. In Minnesota, we saw the team play perhaps well enough to get those two points, but not quite at a level to get more than the split.

In Tuesday’s game against the Wild, Cal Petersen played his best game of the season to date, as he made 32 saves on 33 shots to guide the Kings to a 2-1 victory. The Kings had spurts of effective play, headlined by the the Carl Grundstrom – Michael Amadio – Trevor Moore line, but didn’t reach the heights they did in their prior victory in St. Louis.

Yesterday’s defeat was certainly overshadowed by a pair of scary situations involving Matt Roy and Sean Walker. Roy was aggressively boarded from behind in the second period by Minnesota’s Kevin Fiala, leading to a five-minute major and a game misconduct, a hit that resulted in a disciplinary hearing for Fiala today. Later in the game, Walker took a Matt Dumba shot square in the face, leading to blood gushing from the defenseman’s face as he exited the ice.

The worry and concern for those two players was certainly the sentiment after the game and fortunately, both players were able to travel back to Southern California with the team. When we look at the game objectively, the Kings didn’t come out the way they wanted to and found themselves three goals down less than 13 minutes into the game. In Todd McLellan’s words, it was “pretty evident” that the Kings didn’t play well in the first period last night.

While they battled back with a pair of power-play goals in the second period, isolated mistakes throughout the game led to pucks in the Los Angeles net, overshadowing what was Drew Doughty’s strongest individual performance of the season.

With Roy and Walker both out, Doughty stepped up with a season-high 32:19 of total time on ice, playing an aggressive game both offensively and defensively. Doughty was active at both ends of the rink and showed everyone what he has to offer when he’s at the top of his game.

“I thought tonight I dominated the game,” Doughty said, post-game. “I thought I was really, really good tonight, I don’t think I can play much better than that. As for the whole season, the first one or two games wasn’t my best, but after that, I think I’ve played very good hockey, in all phases of the game. PK, PP, 5-on-5, I’m playing with a lot of emotion, trying to lead the team the best I can, both on and off the ice.”

Looking just squarely at these two games, neither showcased the best of what the Kings can do as a group. That was shown last series, in Game 2 against the St. Louis Blues, when Los Angeles enforced its style of play on the opposition and jumped out to a well-deserved 5-1 lead on the road against the 2019 Stanley Cup Champions.

While the team showed flashes in Minnesota, they did not replicate that same level of play. Doughty wasn’t particularly thrilled with the team’s play in either game, despite the two points earned.

“I didn’t really like either of our games against Minnesota too much,” Doughty said.

Therein lies the oddities, or the uniqueness, in this season’s schedule. Only four times so far this season has a team in the West Division won both games of a two-game set, which teams have played exclusively to date. One of those four was Minnesota over the Kings in Los Angeles, but even in that instance, the Kings earned two points from both games going into overtime.

Through a small sample size to date, it has been noticeably difficult to beat a team twice in two or three days than it is to say string a few wins together against different opposition. The Kings and Blues series was an example of each team being clearly the better side in one of the two games, and that team earning a victory. The two games against Minnesota painted a different picture. It showed that, from a Kings point of view, they were able to get a split without playing their best hockey overall and that will be important this season.

While the obvious preference is to see more of that team from Sunday in St. Louis on a more consistent basis, there is also something to be said about winning games when you don’t have your best stuff. The Kings were able to do that once against the Wild, earning back-to-back wins on the road across the two cities. For the organization that had fewer road victories than any other in the Western Conference last season, that’s a step in the right direction.

“It’s huge, I think, anytime you’re able to get points on the road,” goaltender Cal Petersen said. “You usually have to battle crowds and different fans and stuff like that, but it’s just the day-to-day grind of being on the road. I think we’re really confident at home, and being on the road brings another different element, so any wins that we can get are huge. Hopefully, we can keep a little bit of this momentum going.”

Looking at the other elephant in the room, the Kings were the latest team to have a run-in with the NHL’s COVID Protocols List. They weren’t the first time to have issues, and they will not be the last. Yesterday was a wild and crazy one from that perspective. As McLellan pointed out after yesterday’s game, several players were not allowed to attend morning skate, as contact tracing was conducted, though all but Andreas Athanasiou, who was added to the list, were able to play in the game.

From expecting to see consistency in a lineup that had won consecutive games, to wondering if your entire taxi squad might see the ice, back to finding out you’d lose just one player closer to game time, it was as whirlwind of a day as the Kings have had so far this season.

Looking ahead, as Petersen said, the Kings feel that they are a confident team at home and will have five of their next seven at STAPLES Center to prove it. With Anaheim, San Jose and these Minnesota Wild coming into town in the first-half of this month, sandwiched around a trip to Vegas, the Kings will play games against the teams they are expected to fight with for a playoff berth this season. How everything shakes out – with regards to both protocols and performance – remains to be seen, but through eight games, the Kings have shown some good, some bad, and the ability to place themselves right in the thick of the hunt in the early goings.