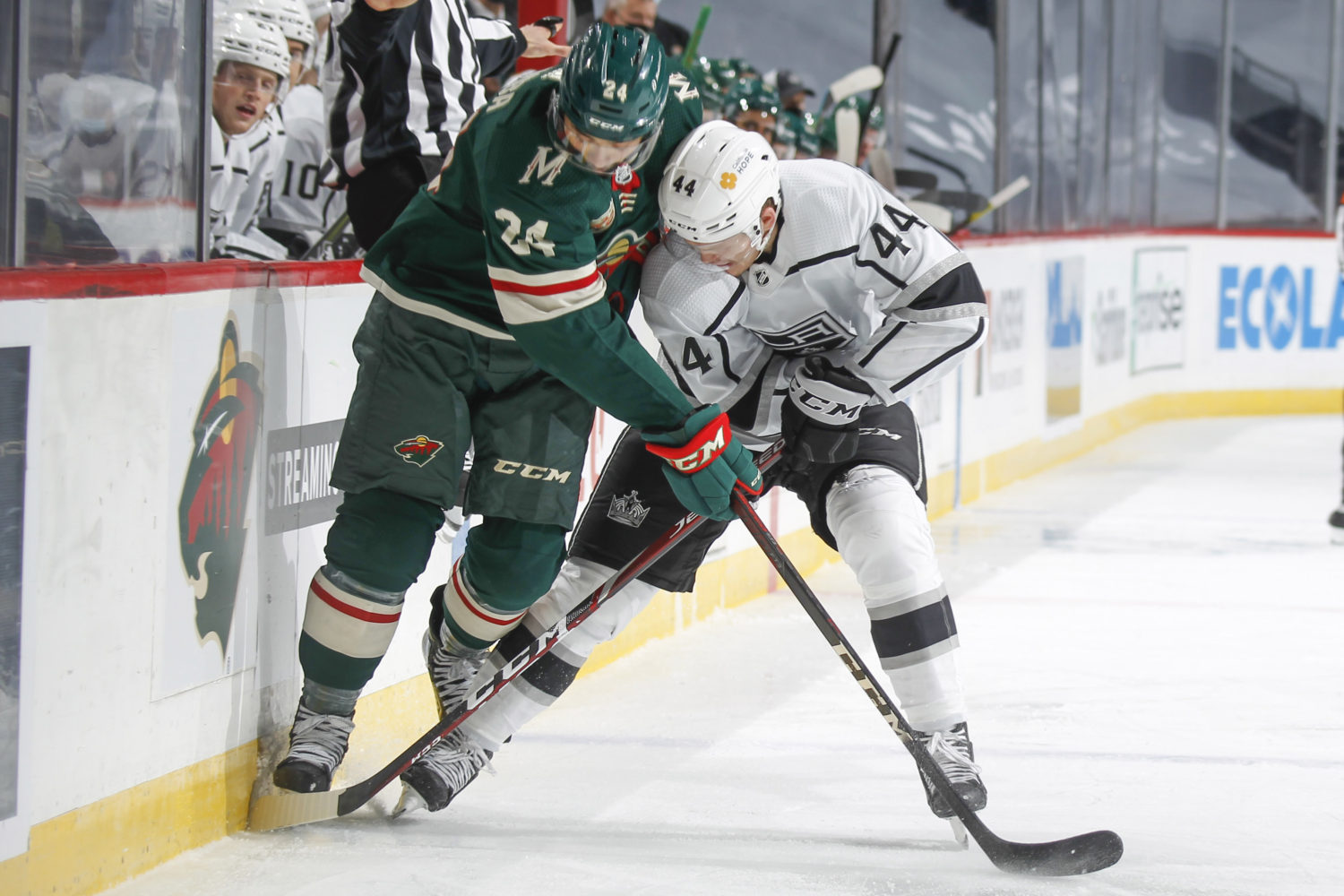 It was first and foremost a scary evening for the LA Kings, as defensemen Matt Roy and Sean Walker both exited the game early with injuries that were extremely difficult to watch.

After the game, McLellan indicated that both players were currently seeing the doctors, and that he expected both players to be able to travel back to Los Angeles with the team tonight. He called both incidents “unfortunate” and did believe that both players will be okay in the long term. Full quote from McLellan below.

In terms of the game itself, the Kings went down by three goals in the first period, only to claw back to a one-goal game with a pair of power-play goals in the middle stanza. The teams traded goals from there on out, with the Wild ultimately coming out on top by a 5-3 margin.

Drew Doughty was active all night, as he collected a goal and an assist and logged more than 30 minutes of ice time with both other Kings right-shot defensemen on the roster leaving early with the aforementioned injuries. Dustin Brown also had a multi-point effort (1-1-2), as did Anze Kopitar (0-2-2).

The power play was the driving force tonight offensively, with two goals coming directly on the man advantage, and the third coming just after a PP had expired. The Kings applied some pressure down the stretch but were unable to pull any closer in the game’s final minutes. The Wild had more of the puck, especially in the first period, at 5-on-5 and ultimately, the three-goal deficit in the opening frame was too much to overcome.

Hear from Doughty and Todd McLellan after tonight’s game.

Update on Sean Walker and Matt Roy
They’re both seeing the doctors and getting evaluated right now, I think they’ll both be able to travel home with us. Obviously, two very unfortunate incidents in the game, not something we want to see in the game at all. I think they’re going to be okay eventually.

On the challenge of refocusing on the game, after those scary moments
Of course it is. Nevermind one, but two in one night, it affects everybody. I thought we tried to rally around it. To begin with, we weren’t very good before Royzie got hit, then we started to wake up and play a little bit more. When Walks took the shot, again we talked about it and the guys wanted to play for them. I thought we played harder after we lost two guys than we did before, but emotionally, it takes a lot out of a group to see two teammates leave like that.

On chasing the game from behind tonight, especially with a short bench
We didn’t play well in the first period, that was pretty evident. The second and the fifth goals, for me, they’re so preventable. We had an empty net, we missed the net with one shot and then the d-man shoots it into somebody else for a breakaway. I don’t know if the goal would have counted, due to goalie interference, but at least let’s put them in the situation to make the call. We didn’t on either of those, and it was in our net after a breakaway, so that one was really frustrating to see. The fifth one, we’re crawling back into the game and we just give the puck away for nothing and it’s in our net. Those are frustrating goals against, they’re completely preventable, they’re not even really forced mistakes, you’re not even in a really stressful situation, you just make bad decisions. We’ve got to get that out of our game if we want to have any type of success. As far as coming back, short-staffed, especially on the backend, you could see at the end the guys were bagged, not a lot left in the tank. You play the hand you’re dealt, and we weren’t dealt a very good one tonight. We’ll regroup and get better.

On Drew Doughty’s play tonight
Drew has the experience, he’s been able to run at a high minute level for his entire career. I thought tonight was one of his better games, he was very aggressive all over the rink, both offensively and defensively. He had an energy and a passion on the bench that kind of rubbed off on the rest. He showed the remaining defensemen that they were okay, that they could do it, and that’s what you call leadership in that situation.

– The Kings scored two goals on the power play tonight, the second time they have done so this season
– Defenseman Drew Doughty had two points (1-1-2), which tied him for the NHL lead in goals by a defenseman (3) so far this season. He also logged a season-high 32:19 in total time-on-ice, which was 2:02 shy of his regular-season career-high in a game ending in regulation
– With two assists, Anze Kopitar extended his league-leading assists (11) total, while also moving back into a tie for the NHL lead for most points amongst all players (12)
– Dustin Brown tallied his first multi-point game (1-1-2) of the season. Brown’s goal leaves him one shy of 100 power-play goals in his NHL career
– Michael Amadio collected his first point of the season, with an assist on Doughty’s second-period goal
– Kale Clague played an NHL career-high 19:00 in total time-on-ice tonight
– The Kings conceded a season-high three goals in the first period tonight, their highest total allowed in any individual period this season
– With tonight’s loss, teams in the West Division fell to 3-9-1 when winning the first game of a two-game set this season. Tonight was the Kings’ first regulation loss of the season in the second game of the two-game sets (2-0-1) entering tonight’s game

The Kings are traveling back to Los Angeles tonight and will have an off day tomorrow.