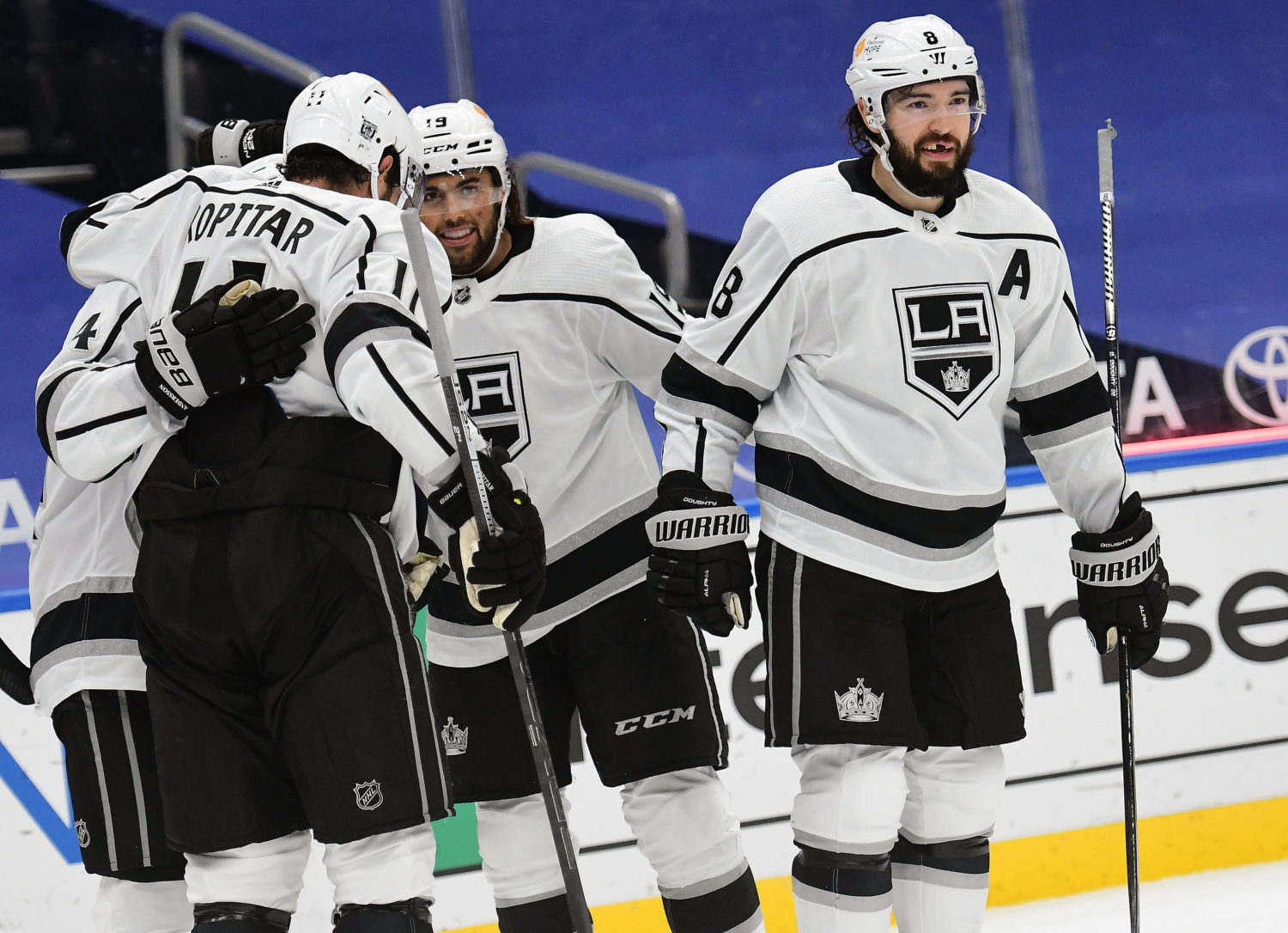 In the words of Head Coach Todd McLellan, last night’s win in St. Louis was the first time this season the Kings took the game to their opponent, right off the start, instead of receiving it.

The first 40 minutes of yesterday’s 6-3 victory are an example of what this Kings team can look like when playing their best hockey. They were solid in their own end and broke out pucks quickly and cleanly, which allowed them to establish the forecheck and create turnovers at the other end of the rink.

That was the main difference between what we saw on Saturday versus Sunday. Take two plays as specific examples. On Saturday, David Perron forced a turnover in the Kings defensive zone, off of a missed pass and receive between Matt Roy and Gabriel Vilardi, and turned it into the Blues’ third goal, the eventual game-winning goal. 24 hours later, it was Dustin Brown using his hand-eye coordination to knock a puck out of the air in the offensive zone, before showing the poise to find Vilardi entering the zone, and Vilardi finishing the play on the backhand.

It was just an isolated play on both nights, but it serves as a good representation of how much better the Kings managed the puck on night two. Brown’s play was on the individual side, but as a group, the Kings were noticeably better on the forecheck, creating turnovers that allowed them to play in the offensive zone.

“We were much better in our end, which allowed us to get on the forecheck,” McLellan said after last night. “The pieces were all working together and our forecheck, where maybe the night before was only 1 to 3 pieces, tonight it was able to be 4 or 5, and the extra piece helped us keep a lot of pucks alive and play in their end in the first two periods anyhow.”

Over the last four games, the Kings have matched up against two of the three favorites in the West Division this season, and have come away with two wins, two losses, and a +1 goal differential. In none of those four games were the Kings not, at the very least, within one goal in the third period.

While Los Angeles has conceded the first goal in all six games so far this season, they started both games in St. Louis better than they did against Colorado. On Saturday, they created several chances early, including an Adrian Kempe shot off the post that may have been the best look in the opening 20. Sunday was an even better example of what the Kings can do when they play the opening period they set out to.

“I thought we came out with a little bit more authority,” Anze Kopitar said. “That first period, even though we didn’t score a whole lot of goals, I thought it was one of the best periods we’ve played. Being aggressive, being on top of pucks and shooting the puck too.”

Speaking of Kopitar, through the first six games of the season, he has been Kopitar, and then some. The Kings captain leads all players in the NHL with nine assists and is tied with Toronto forward Mitch Marner for the league lead in points (10). Kopitar’s linemates have been solid as well, with Adrian Kempe (3-2-5) and Alex Iafallo (1-3-4) producing alongside him. Iafallo has carried perhaps less of the fanfare so far, but at .67 points per game, he’s exactly where you expect him to be. Kempe has been especially noticeable and has points in four straight games after he had a goal taken off the board in each of the first two games of the season. Kempe lost another goal last night, though he retained a point on the play with the primary assist. Had two of the three goals stood as his tally, he’d be leading the league in goals.

“He’s got the hot hand,” Kopitar said of Kempe. “He’s been like that in the past, where he went into spurts where he was one of, if not the, best players on the ice. Now, we’re trying to get him the puck as much as he can and hopefully he can stay consistent for us.”

While the big line was productive in both games, it was the depth scoring that helped to set the Kings apart on Sunday. Carl Grundstrom was impactful, especially in the first period, and rewarded with a really nice individual effort. Grundstrom pulled a move out of the NHL 21 video game to dance around a defenseman before he beat Ville Husso shortside for what was the go-ahead goal.

Forward Lias Andersson got his first goal as a member of the Kings late in the second period, as he took a breakaway feed from Kopitar immediately after he exited the penalty box and though his backhand-to-forehand deke hit the post, he whacked home the second effort for the goal.

Both players started the season outside of the lineup, and in their opportunities since, both players have done their part to show that they deserve to remain in. McLellan has said twice in recent days that the Kings are not the kind of team that can have just two lines or 12 guys going and still find success. He emphasized that the Kings need to have four lines, three defensive pairs and two goaltenders going every night to be successful as a group. In Sunday’s convincing victory, everyone was pulling the rope, and you saw what the outcome was when that happens.

Offense never comes easy in the NHL, but the Kings have looked the part of a more potent team at putting the puck in the net. Through six games, they’ve averaged 3.33 goals per game – In the West Division, each team has played six games, and no team has scored more goals than the Kings’ 20.

McLellan has continually stated that he believes the Kings need to score at least three goals on a given night to have a chance to win the game. He attributed the early-season offensive improvements to a variety of reasons after Sunday’s victory, including a deeper group overall, better familiarity with the structure and each other, as well as an improved power-play.

“I think we have a little more depth and we are more familiar with the tactics and the structure that we want to play with, so we’re a little bit more predictable,” McLellan said. “Let’s face it, our power play is further ahead than it was last year at this time, I think we’ve scored a goal or come close to scoring every game on the power play, which definitely helps us and gives us some confidence offensively. We’ve scored goals on faceoff plays that we never had in place last year, at least in the first half of the season, so a lot of it is just being around each other for a year and a bit now.”

From my vantage point, the Kings have yet to look out of place over the course of 60 minutes in any of their six games, and that right there is a sign of progress. There were certainly stretches of play over the last two seasons where you couldn’t say that, and the way that certain players, and the team as a whole, have started the season is a real positive.

I mentioned it two games ago, that .500 hockey probably doesn’t get you into the playoffs, but it without a doubt keeps you in the hunt. The Kings currently sit one point behind the Blues for fourth place in the standings, and with a shortened season, it’s going to be important to stay in the mix to set up meaningful hockey games, and a chance to earn a spot, down the stretch.

Looking ahead, the Kings will now get another crack at the Minnesota Wild. In the opening two games of the season, the Kings probably deserved to have at least three points but were unable to hold onto leads in the third period.

Since those first meetings, the Kings have shored up some things on the defensive side of the puck and will look to put those improvements into action at Xcel Energy Center on Tuesday night.

The Kings have a full team off day today, following the back-to-back in St. Louis, and will return to action with a morning skate on Tuesday morning, in advance of the first of two games against Minnesota. Puck drop is slated for 5 PM Pacific time tomorrow evening.