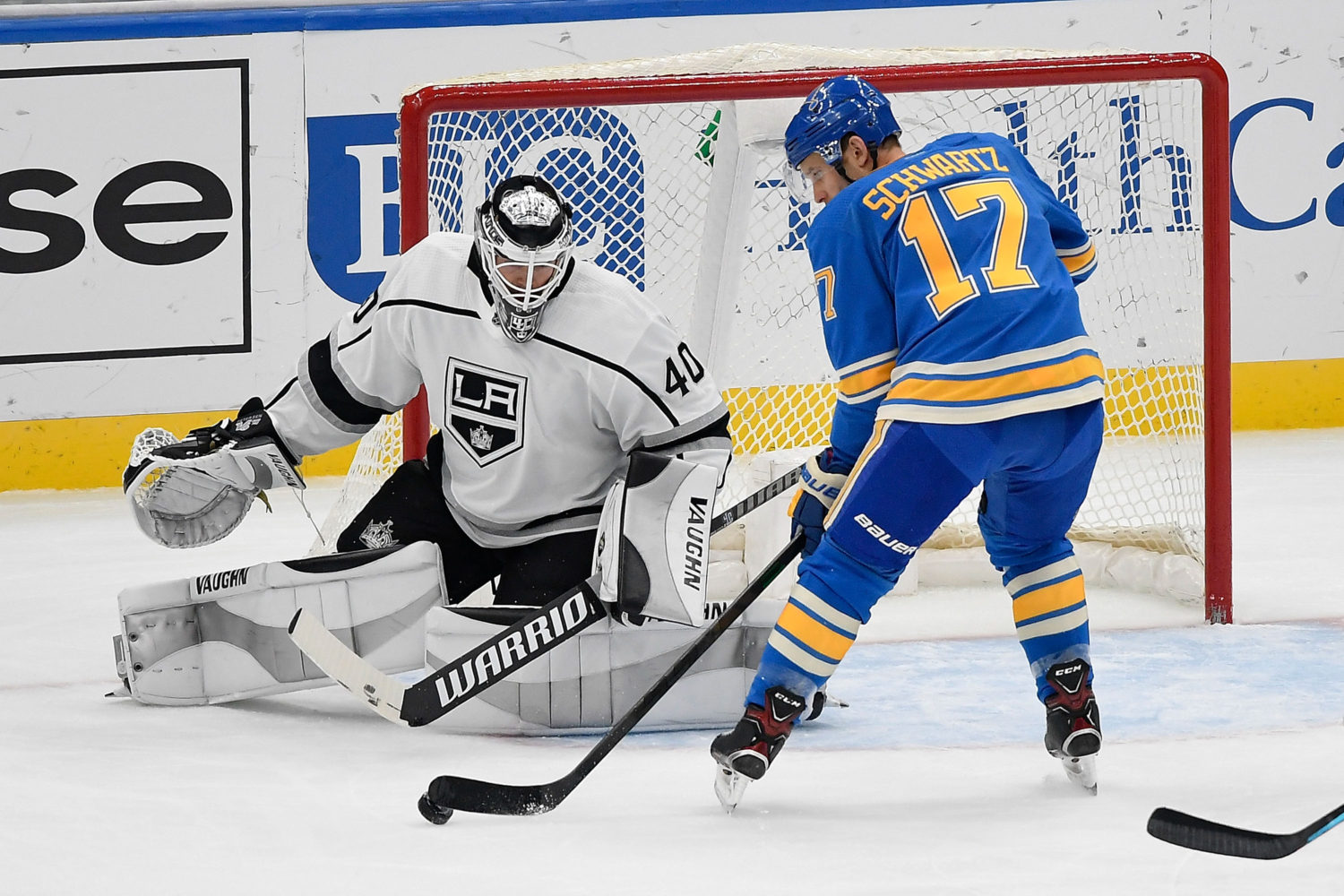 The LA Kings were unable to overturn a second-period deficit, as they fell by a 4-2 final against the St. Louis Blues to begin a four-game road trip.

The Kings did get off to a better start than in past games, with some good looks early on, but conceded a power-play goal midway through the first period. After Adrian Kempe – who was noticeable all night – scored early in the second, St. Louis capitalized on a pair of mistakes by the Kings in their own end, which resulted in a pair of goals for the hosts. Dustin Brown drew the Kings closer, with a 5-on-3 goal, but the Kings couldn’t find the equalizer down the stretch, and eventually conceded an empty-net tally in the game’s final seconds.

While it wasn’t a bad effort tonight, the Kings lacked the necessary sharpness and execution, specifically with regards to passing and receiving the puck to find success against a team like St. Louis, as Todd McLellan detailed in his post-game press conference.

Hear from McLellan and defenseman Matt Roy below –

On not being able to find the tying goal down the stretch
Well, that was the end story. The in-between story was some execution problems. We gave up a goal off a faceoff that we should have no trouble handling and a poor breakout. They’re a heavy, forechecking team, they cause problems, but both of those situations were ones that we should have been able to handle but we didn’t. Some things to clean up.

On if he was happier with the energy from the team’s start tonight
Somewhat – We created a few chances early, and then I thought we kind of sat back a little bit in the first period. I still think we can start better. We need one of those explosive starts that we had in a few games last year, that will allow us to get on top of teams, so instead of us receiving the game, we can dictate the aggressiveness of it going the other way.

On the team’s “puck management” tonight
Well, the definition of puck management is what we have to talk about. Some of the turnovers, and some of the situations that we created, came off of our stick. It wasn’t those plays that are just bonehead plays, it was sometimes really good passing situations and we just didn’t handle the puck very well. We didn’t receive…we didn’t throw the ball or catch the ball very well, for lack of a better analogy and as a result, we were caught in between. Stops, starts, wasting shifts, even some of the execution off of won faceoffs, where we know exactly what we want to do with the puck and the passing was poor and it stayed in our end. For me, that would be puck management. There’s some nights where you just flat out turn it over, because of some really dumb plays. I just thought tonight our passing skills were very poor.

On trying to come back in the third against St. Louis
Not a team you want to come from behind against. This team can lock it down. [St. Louis] is very comfortable playing with a lead, they give up very few chances and defend well. In my opinion, they’re one of the best 5-on-5 teams in the league. They’ve got size, they defend well and they have confidence doing it, and they did it tonight. We didn’t get many opportunities or looks down the stretch in the third, even on the power play. That has to do with us a little bit, but it also has to do with them. Sometimes, you have to tip your hat at how well they can check. It’s unfortunate that we put ourselves in that situation, but we did, and we couldn’t draw back in.

On Anze Kopitar’s play, and the security blanket he provides the team
You used a really good term, security blanket, because for me, he’s an extension of the staff. He understands how we want to play, he attempts to play the right way all the time. I think through his work ethic, not so much through his words, but just through how he does things, he provides great leadership to our group. There’s a lot of nights when we’re counting on him, he’s playing a lot of minutes right now, we’re going to have a lot of hockey, so that’s concerning, we’ve got to make sure he gets his rest. We need a few others to pick it up, especially through the middle a little bit, so he can get a breather.

– Adrian Kempe now has goals in three consecutive games, dating back to 1/19 vs. COL. Kempe has now scored goals in three straight games four times in his career. The most recent time, before tonight, came in 2019 from 12/17 – 12/21
– With his primary assist on Dustin Brown’s second-period goal, Anze Kopitar tallied his seventh assist of the season. Kopitar is currently leading the NHL in assists this season.
– Kopitar played in his 1,078th game with the franchise tonight, breaking a tie with Luc Robitaille for third-most all-time in Kings history. Kopitar now trails only Dave Taylor (1111) and Dustin Brown (1187).
– With an assist on Kempe’s goal, Alex Iafallo now has a point in three consecutive games against the Blues (2-1-3), dating back to last season
– Dustin Brown scored his 98th career power-play goal tonight. Brown ranks fifth all-time in franchise history in PPG’s, two shy of tying Bernie Nicholls.
– Kings defenseman Matt Roy played in his 100th career NHL game tonight.
– The Kings have given up the first goal in all five games played so far this season.

The Kings are not scheduled for a morning skate tomorrow, considering the back-to-back. The two teams will rematch tomorrow at 5 PM Pacific.