TONIGHT’S MATCHUP: The LA Kings hit the road for the first time this season with a four-game trip, beginning tonight in St. Louis. The Kings will play two games against the Blues, tonight and tomorrow, followed by a two-game set in Minnesota.

HEAD-TO-HEAD: The Blues took both head-to-head matchups against the Kings last season, including a 5-2 victory in Missouri. St. Louis has won seven of the last ten head-to-head meetings between the two teams and the Kings are 4-5-1 in their last 10 games at Enterprise Center. For the Kings, Alex Iafallo (2-0-2), Drew Doughty (0-2-2) and Anze Kopitar (0-2-2) each collected two points from the season series against St. Louis last season, with Iafallo scoring a goal in both games. For the Blues, forward Brayden Schenn had four goals against the Kings last season, while Vince Dunn (2-1-3), Jaden Schwartz (1-2-3) and David Perron (0-3-3) each had three points.

KINGS VITALS: Goaltender Cal Petersen, who was off first this morning, has fond memories of St. Louis – The Kings netminder picked up his first career NHL shutout at Enterprise Center on November 19, 2018, as he saved all 29 shots that came his way in what was just his third career NHL start. The shutout is the only one to Petersen’s name at the NHL level, though he had four a season ago with the Ontario Reign. In his NHL career, Petersen has posted excellent numbers in a 10-game sample size on the road. The Iowa native is 5-4-1 with a .933 save percentage and a 2.38 goals against average. He also has a really cool goalie mask!

🔥 @CalPetersen40 bringing the heat with his new mask

The forward lines look to be remaining in place from what we saw on Thursday against Colorado. The Kempe – Kopitar – Iafallo line produced the only 5-on-5 goal for the Kings, with Kempe burying Kopitar’s cross-ice feed for the game-winning goal late in the third period.

“I thought they were effective,” McLellan said of the new-look top line. “I thought that Kempe gave [the top line] a little bit more pace, and I thought Brownie fit well with Gabe and that group. The flip was something we’re happy with to this point, and we’ll see if we can build off of it.”

In terms of roster moves for tonight, Lias Andersson was activated from the taxi squad in order to play tonight – this move happened this afternoon. More on Andersson that below.

In terms of the defense, McLellan said to expect the Mikey Anderson – Drew Doughty pairing to continue tonight. He adjusted the defensive pairings during Thursday’s win over Colorado and attributed some of the comeback efforts to those adjustments.

The odd man out in this scenario is Olli Maatta, who McLellan confirmed will not play tonight. The Kings Head Coach reiterated that he still believes that Maatta will be a good player for the Kings, but feels he needs to reset a bit, to “play to his capabilities.”

BLUES VITALS: Expect goaltender Jordan Binnington to get the start in net tonight for the Blues. Binnington has faced the Kings three times in his professional career to date and has posted a 2-1-0 record, along with a .926 save percentage and a 2.36 goals against average.

Defenseman Marco Scandella missed the most recent game for the Blues, on Wednesday, but returned to practice yesterday afternoon and skated this morning. Scandella is expected to be in the lineup tonight for the home side.

Per the Blues’ website, here are tongiht’s expected lines –

In the Blues, the Kings are expecting a difficult challenge. The 2019 Stanley Cup Champions still have the bulk of that core together and will pose a tough test as the Kings hit the road for the first time this season.

“I would say that last year’s games against St. Louis came very early in the year, the second one was in and around Christmas, and we didn’t get to play them the third time,” McLellan said. “They were the Stanley Cup champs, and carried them that way, they still have that in their locker room. They’re big, they grind it out, they play a very good 5-on-5 game. Their [defensemen] are up in the rush and we just saw a team that had that as well in Colorado. I think they’re a little more straight-line maybe than Colorado, maybe a little more physicality, but they provide a handful for anybody that plays them, us included.”

Hips Don’t Lias
If you looked at his transactions page, Lias Andersson has had quite the wild week.

Andersson began the week on the taxi squad but was elevated to the active roster on Tuesday in advance of the game against Colorado, when he made his LA Kings debut. The following day, he was reassigned to the taxi squad before being recalled again on Thursday night to play against the Avalanche in round two. For Friday and Saturday? Rinse and repeat.

Andersson was reassigned to the taxi squad yesterday and waas recalled by the Kings again later on today to play tonight against the Blues. He said this morning that he doesn’t really focus on that kind of thing and that where exactly his name appears on the roster isn’t a concern, he’s just focused on his own game on the ice.

If the transactions weren’t enough, on Tuesday Andersson centered the fourth line for the Kings, and was moved to the left wing on the third line alongside Gabriel Vilardi and Dustin Brown on Thursday, where he is expected to be slotted again tonight. It’s been a bit of a whirlwind time for the 22-year-old forward, but he’s indicated he’s comfortable in both positions.

“I can play both [center and wing],” Andersson said. “I thought the game that I played wing actually went pretty good for me, I’m comfortable with both. I’ve been centering for a long time, that’s my usual position I think, but I’m comfortable on the wing too. All the players here are so good, that it’s easy to fit in with the lines.”

Andersson indicated that he, Vilardi and Brown are all strong defensive players, who can adapt on the fly. He said that in certain situations, he finds himself in a center’s role, especially defensively, and knows that all three players can adapt to fit the situation.

McLellan was happy with Andersson’s performance in his NHL debut on Tuesday, and was happy enough with the third line on Thursday to keep the unit together tonight against the Blues. Andersson compliments Vilardi and Brown on that unit well and will retain his spot with the pair, at least for the immediate future.

“Competitiveness – He’s not the biggest player, but he’s got some of Blake Lizotte’s qualities, where he’s tenacious on pucks, he gets good body position over the top, he wins more battles than he loses,” McLellan said of Andersson. “He seems to have a good sense of what’s going on, on the ice, and the utility of being able to play center or wing. We’ve used him on the penalty kill, those are all advantages that he has to use, for him as an individual and also for us as a team.”

Totally Kyle
The Kings should see a familiar face across the way tonight in Kyle Clifford.

Clifford was a Kings draft pick back in 2009 and spent the first 11 seasons of his NHL career with the Los Angeles organization.

“We’ve already faced him once, and I got him pretty good there, so I’m sure he’s going to try and do the same thing to me, he’s going to come after me, he’s told me that already,” Drew Doughty said earlier this season about facing Clifford. “It’s always fun playing Cliffy. Obviously we miss him here in LA, for multiple different reasons, but he’s done a great job and he’s going to have a great impact for the Blues.”

A #13 will be in the lineup for the Kings, however, in Gabriel Vilardi. Vilardi switched from #42 to his own long-time number, 13, in the offseason, the number that Clifford wore while with Los Angeles.

Vilardi showed Clifford the respect he earned with the Kings, by reaching out before officially making the change. According to Vilardi, Clifford was happy to oblige, and the change was made permanent.

“I face-timed him [to ask],” Vilardi said, earlier this season. “Cliffy’s an awesome guy, I’m friends with him, so I face-timed him and asked him what’s going on, how’s life, told him I was planning on 13 and if that was cool with him. He said for sure. He’s a nice guy, I just wanted to make sure he was cool with it.”

Clifford is expected to skate on a line with Ivan Barbashev and Oskar Sundqvist on the fourth line in tonight’s game. Hear more from Clifford below –

On The Road Again
Typically, an early-season road trip can serve as a good opportunity for players to bond. This season, however, presents different challenges.

There is no “away from the rink activities” that come with travel this season. We saw recently in Washington that even something as simple as a hotel room gathering can lead to players being forced out of the lineup for an extended period of time.

From McLellan’s point of view, he still believes that players can get some of that bonding element out of this trip, though he noted that it will obviously be different than in years past.

“I believe it can,” he said. “I think the best form of bonding is playing well, moving your game forward, winning games on the road is the best way of doing it. I know there’s a lot of auxiliary things, dinners, outings, things like that that go into it, but if we play well, we have good spirit in practice, I think there’s a good chance to bond on the road, for sure.”

Forward Carl Grundstrom had some inside information today about bonding on the road, differences in travel, staying engaged at the hotel and more. Hear from Grundstrom below –

Game Thread is next from St. Louis! 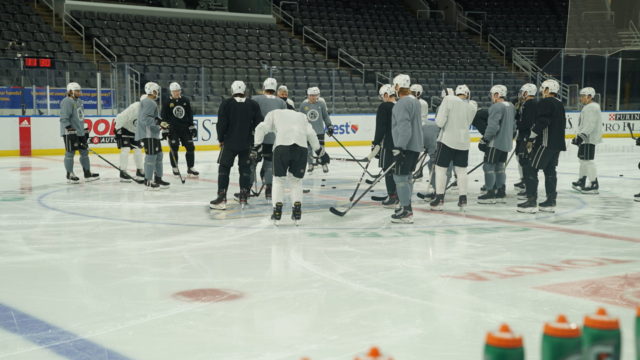