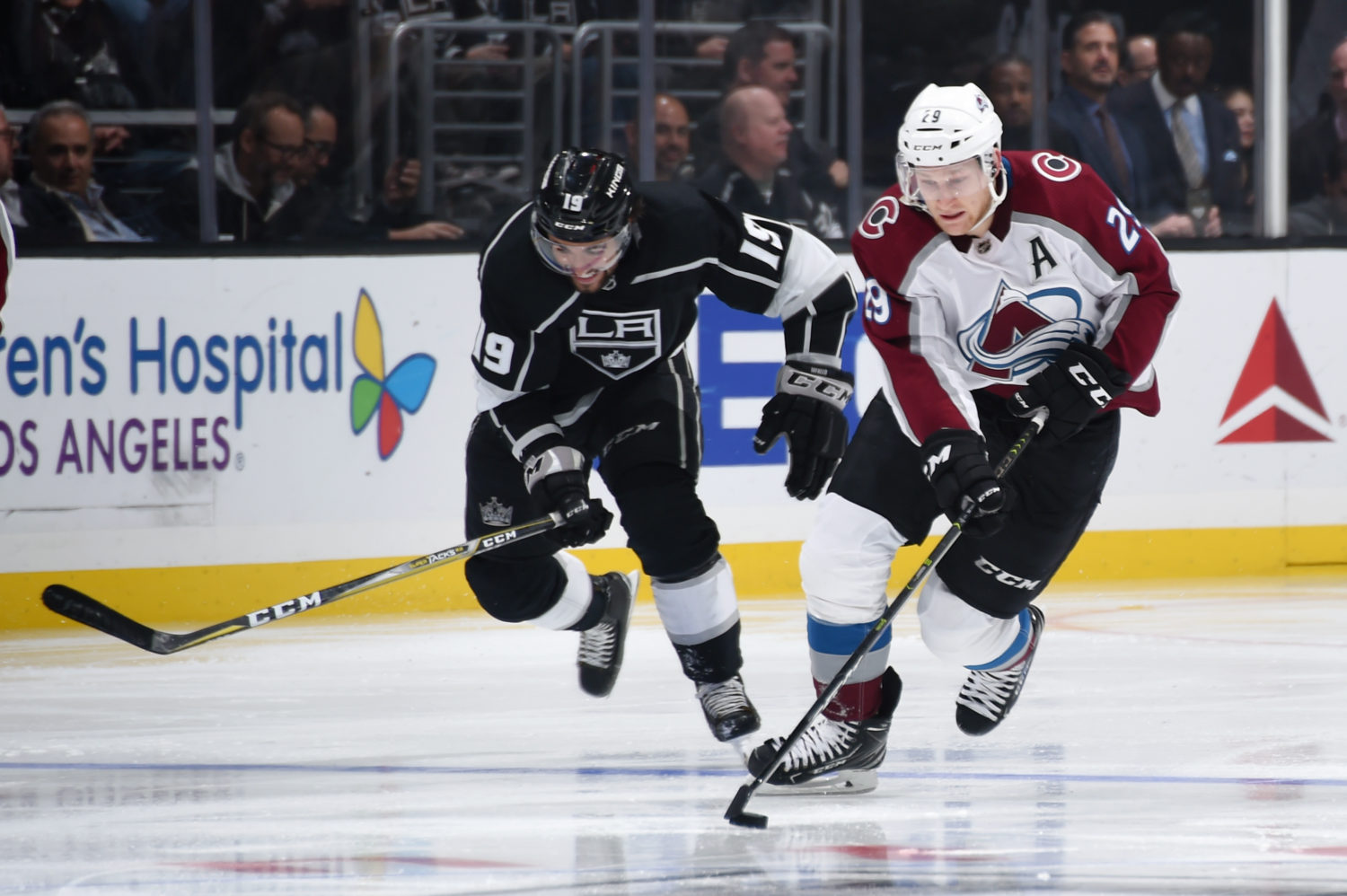 TONIGHT’S MATCHUP: With two games now behind us, the LA Kings return to action this evening for the first of two games against the Colorado Avalanche. Puck drop is set for 7 PM from STAPLES Center.

HEAD-TO-HEAD: Despite Colorado’s success last season, the Kings won the season series by a 2-1 margin, including victories in their second-to-last game of the season at STAPLES Center, and in the NHL Stadium Series at the Air Force Academy. Colorado, despite being the highest-scoring team in the Western Conference, averaged just one goal per game against the Kings last season, with three tallies from three meetings. Despite the low-scoring games, Alex Iafallo led all current Kings players a season ago with three points (1-2-3) from three games played, while forward Austin Wagner had goals in both home games. Wagner has more points against Colorado than any other NHL team in his young professional career.

KINGS VITALS: The Kings held their morning skate today at Toyota Sports Performance Center in El Segundo, with the full group participating minus Dustin Brown, Drew Doughty, Olli Maatta, all healthy, and the injured Matt Luff. Luff’s absence necessitates at least one roster change in advance of tonight’s game, though McLellan indicated that there will be three moves in total. Expect forwards Carl Grundstrom and Lias Andersson to check-in, with Luff and forward Michael Amadio exiting the lineup. The top three lines are expected to remain the same, while the defense is also expected to remain unchanged from Saturday.

A projected lineup for tonight’s game, though the team did not take official line rushes during morning skate –

In net, expect goaltender Cal Petersen to make his season debut tonight. Petersen missed a week of action on the unfit/non-roster list, related to COVID-19 protocols, but returned to the group in advance of Saturday’s game and served as the backup goaltender. With now a full practice, as well as a pair of morning skates, under his belt, Petersen gets the nod this evening against the Avalanche.

McLellan noted that he felt it was more important for Petersen to get additional skates in than it was for Walker and MacDermid, due to his position. Getting a feel for the puck at yesterday’s practice, plus morning skates today and Saturday, have him ready to go.

“He just needed to feel the puck a little bit, goaltending is obviously a little bit different than the other positional players,” McLellan said. “It wasn’t like he was out of shape, or rusty, he just needed to get back into game action, practice action. We have a ton of confidence in [Petersen], and Quickie moving forward. It will be his night tonight, and we’ll see where we go from there.”

AVALANCHE VITALS: Per the Avalanche team website, Philipp Grubauer is likely to get the start tonight in goal. Grubauer has been stout against Los Angeles to date in his professional career, though the sample size is minimal. In five career appearances, the Germany native is 2-2-0, with a .951 save percentage and a 1.50 goals against average. Grubauer’s SV% and GAA are his second-best against any one NHL opponent he’s faced multiple times (trailing only Buffalo).

Per the Avalanche website, we could see an 11F – 7D approach from the visitors tonight. Here’s the projected lines posted earlier today –

In Colorado, McLellan is expecting a different type of test than the Wild presented. The Avalanche are a different style of team, starting with their abundance of speed, offensive ability and confidence coming off of an 8-0 victory.

“Well, this is a different monster than what the Wild were,” McLellan said. “This team is confident, it’s effective, it’s got a ton of speed obviously in Colorado. The preparation is a little bit different than what it was for Minnesota, but we’re still in that phase where we’ve got to get our house in order, our game in order, so we’ll talk a lot about what we do and what we need to do. We’ll look at some tendencies of what Colorado does, and we’ll try to put it all together with a game plan.”

Integrating New Faces
In Carl Grundstrom and Lias Andersson tonight, the Kings will have a pair of players making their season debuts, likely to come on the same line.

Grundstrom and Andersson have skated together all throughout training camp, almost exclusively from Day 1 through regular-season practices. While the third man has changed several times, that continuity and comfort level could help both as they join the Kings lineup this evening. 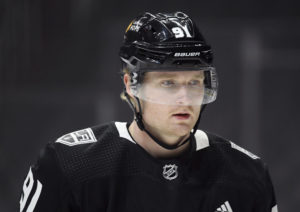 For Grundstrom, it’s nothing new, as he’s played games with the Kings in each of the last two seasons. Tonight would mark Andersson’s debut with the club, however, after he was acquired in exchange for a second-round selection at the NHL Draft in October.

When a player goes from a scratch to in the lineup, there’s a balance between simplifying their game, while also trying to be noticeable to the point of keeping their spot moving forward. McLellan feels that both players are up for the task.

“I think both of those players can do it,” McLellan said. “They both had good training camps, they’ve been patient waiting for their time and their opportunity to play and tonight they’re going to get it.”

It’s kind of a catch-22 because those things can sometimes contradict each other. You don’t want to be too cautious, because you can just blend into the game. But you can’t take unnecessary risks either, leading to mistakes and putting the team at risk. McLellan feels there is a balance to it, and he expects both players to come out aggressive tonight.

“I think any time you get an opportunity, you’ve got to leave your mark on the game somehow,” he said. “You’ve got to know your game, you’ve got to know what your strengths are, play within our structure and play free. You can’t go out there worried about messing up. Sometimes those are good teachable moments but get aggressive, get hungry and use the minutes you get to your advantage. Once you’re in, don’t come out, that’s your job.”

Halting The Avalanche
As noted earlier – I found an interesting stat this morning when doing some research on this two-game set.

The Avalanche were the highest-scoring team in the Western Conference last season, with 237 goals, which accounts for 3.39 goals per game. In three meetings with the Kings, however, the Avalanche scored just three goals total, one in each game.

This is the same Avalanche team that is coming off of an eight-goal output against St. Louis, and resting on the laurels of a three-game sample size from last season would be foolhardy.

“Obviously we know that they just won 8-0, so they’ve got some momentum coming into this game,” Wagner said. “I think with our forward lineup and our d-core we can shut them down, we proved it last season. I think just playing our systems, game management like we’ve talked about. If we do that, I think we’ll be fine.”

Talking with a member of the defensive unit – in this case Sean Walker – he felt that the Kings commitment to their structure was a big determining factor in their success a season ago against Colorado.

He’s hopeful that the team can continue the same kinds of things tonight, to throw the Avalanche off of their game and force them to play the way the Kings want to play.

“When I think back to those games last year, we were really sound in our structure, and kind of forced them to play our game, instead of letting them play theirs,” he said. “I think if we can do that, and limit their speed as much as possible, then it’ll work in our favor.”

Not counting shootout goals, the Kings accounted for three of the 10 games last season in which the Avalanche were held to one goal or fewer. A similar defensive effort would certainly go a long way towards a successful evening tonight.

While Petersen served as a backup on Saturday and will make his season debut tonight, Walker and MacDermid only had a morning skate to get readjusted to skating before stepping right into the lineup against Minnesota. For his part, MacDermid knew it would be tough to shake the rust off but overall was just excited to get back into the lineup.

“It was exciting to get back into the lineup,” he said. “From being out for so long, I felt good out there and just tried to keep it simple, coming back in after that time off. Just make simple, strong plays, defend well and I think I did a pretty good job of that.”

Walker put it pretty bluntly when asked about how he spent his time off – “It wasn’t a vacation.”

Both players had high-intensity workouts in their time away from the rink, to help keep them in shape the best they could to put them in a position to hopefully be up to speed when they returned to the rink.

The other side of things was having to isolate from the team during the season.

Especially after what was already an extended offseason, it was tough to have to be on their own for another week, just as a sense of normalcy finally returned with the start of the season.

“It’s pretty tough, especially with the long offseason and being away from the guys too is really hard,” MacDermid said. “When we were able to come back, it was awesome to see the guys again and get back on the ice, work out any rust we got over those seven days.”

MacDermid and Walker are expected to continue as a defensive pairing this evening against the Avalanche.

Game Thread is coming up soon! 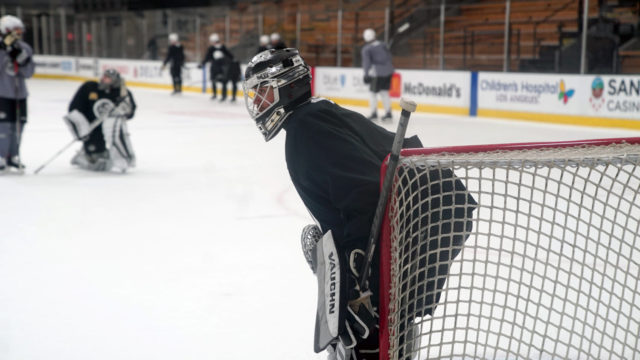