We’re three days away from the start of Kings camp, and also three days into the World Juniors. With most teams now halfway through the preliminary round, participating LA Kings prospects have showed out in their opening games.

From shutouts in net to game-opening goals to multi-point nights, we’ve seen a bit of everything thus far from the NHL-high nine prospects playing for their countries in the event from the Los Angeles organization.

Perhaps none have shined brighter than goaltender Lukas Parik, who dazzled between the pipes in a 30-save shutout for the Czech Republic last evening. In the final game of the day, with his team staring down an 0-2 hole to begin the group stage, Parik allowed exactly zero pucks behind him in his 2021 Tournament debut, seizing hold of the net after serving as the backup in the first game. 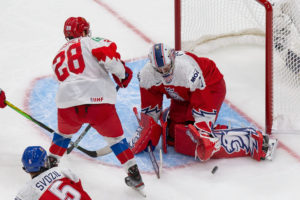 “It was a great feeling, I can’t even describe it,” Parik said in yesterday’s post-game press conference. “I was just imagining how this game could happen and the guys looked great, we played really great as a team. The feeling was unbelievable. We have to refocus for other games, the game against USA, and just play our systems again.”

As Parik alluded to, the work doesn’t end here for he and his teammates, with a big game against the United States coming tomorrow, following a day off today. The United States – Czech Republic matchup, including a trio of Kings prospects, is the first game of the day on Tuesday, facing off at 11 AM Pacific. The young goaltender believes that strong practice habits helped fuel the win over Russia, and believes they will be key in the game against Team USA.

Speaking of those Americans, Team USA began the tournament with a 1-1 start, with an 11-0 win over Austria on Saturday following a 5-3 loss against Russia on Christmas night. 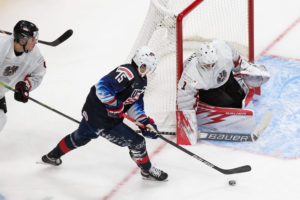 After the three LAK prospects representing the United States – Brock Faber, Arthur Kaliyev, Alex Turcotte – were held scoreless against Russia, all three collected multiple points in the win over Austria on Saturday evening. 2019 first-round selection Alex Turcotte led the way with three assists in that game, along with a +3 rating. Forward Arthur Kaliyev and defenseman Brock Faber each chipped in with two assists apiece, with Faber leading all Team USA skaters with a +4 rating.

Personally, I don’t think there’s really a ton to take from an 11-goal win in terms of analysis, so don’t expect a deep dive here. Nonetheless, it’s great to see each LAK prospect with a multi-point game in a big win. Turcotte and Kaliyev have skated together on the first line in both games, and as returning players, both will be looked upon to help carry the offensive load in the coming games against stiffer competition. Faber was strong against Russia in the opener, earning a bump from the third defensive pairing to the second unit from game one to game two, as USA Head Coach Nate Leaman noted.

Rounding out the five Kings prospects in Pool B, Swedish defenseman Tobias Bjornfot helped to extend his nation’s winning streak in pool play to 53 games with a 7-1 victory over the Czech Republic in their opening games of the tournament. The 2019 first-round selection led all Sweden skaters with a +3 rating, collected a pair of assists and ranked second amongst defensemen in time on ice (18:08). Bjornfot and Sweden are back in action this afternoon with a 3 PM faceoff against Austria. 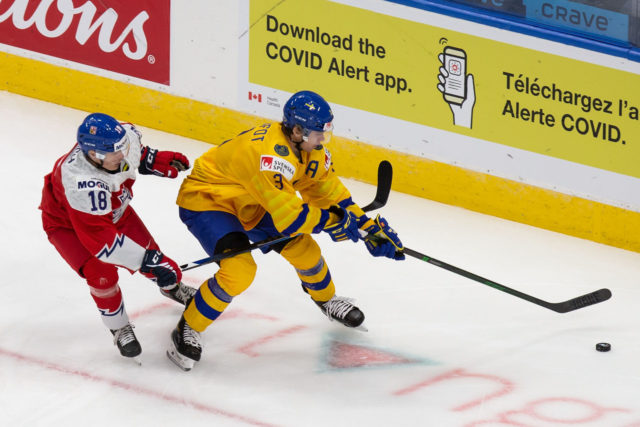 In Pool A, 2020 third-round selection Kasper Simontaival has collected a point in both of his team’s games to date, helping to lead Finland to a 2-0 record out of the gates.

Skating on the top line, Simontaival collected the primary assist on the eventual game-winning goal in a 7-3 win over Germany to open the tournament, followed up by a multi-point effort in a 4-1 win yesterday over Switzerland. The 5-9 winger set up Anton Lundell for a tap-in goal, the eventual game-winner, in the first period and closed out the scoring with an insurance goal, a power-play tally, late in the third period to ice the game late.

Through two games, Simontaival is tied for second on his team in scoring, and ranks tied for eighth overall.

Tied with Finland at the top of the Pool A standings is Team Canada, which rolled to a 16-2 victory over Germany in its tournament opener, followed by a 3-1 win over Slovakia yesterday.

If we’re not putting a ton of stock into analyzing an 11-goal Team USA win, then where does that leave us with a 14-goal Team Canada win? Especially considering that Germany dressed only 14 skaters, and was on the second half of a back-to-back, while Canada didn’t play the day prior. The result was inevitable, and judging prospects off of that sort of game would be a fruitless exercise.

As far as Kings prospects go statistically, forward Quinton Byfield collected an assist against Germany, to go along with a +2 rating and 13-of-16 in the faceoff dot, as a part of the lopsided victory. Byfield was scoreless with a +1 rating against Slovakia, and was on the ice defending a late lead with a 2-1 game in the final minutes as well as the empty-net goal.

Defenseman Jordan Spence was a healthy scratch against Germany, but entered the lineup against Slovakia and made an instant impact. Though he played just over five minutes in total, Spence opened the scoring 4:08 into the game, as he crashed the net from the right point and buried a rebound through traffic for the game’s first goal.

“It’s unfortunate for [Braden] Schneider getting suspended, but this morning I was at the morning skate and I just wanted to get my mind into it as if I was playing,” Spence said. “This afternoon I got the call I was going to be in the line-up, then they put me on, there was a loose puck there and I scored. There was a lot of emotions going on, just being scratched last game to coming back the next day, playing and scoring. It’s amazing but I’m just more happy about us winning the game.”

Facing off against Canada in yesterday’s game was fifth-round selection Martin Chromiak, who scored Slovakia’s only goal in the 3-1 defeat. Stepping in from the left-hand circle, Chromiak wired a wrist shot past Canadian netminder Devon Levi on the glove side for a power-play tally. Chromiak’s three shots on goal tied for the team lead in the game, while he ranked second on the team in time on ice amongst forwards in a 1-0 victory over Switzerland in the opening game on Saturday.

Looking ahead, Bjornfot and Sweden play their second game of the tournament this afternoon at 3 PM Pacific, followed by Chromiak and Slovakia in action against Germany at 6:30 PM. 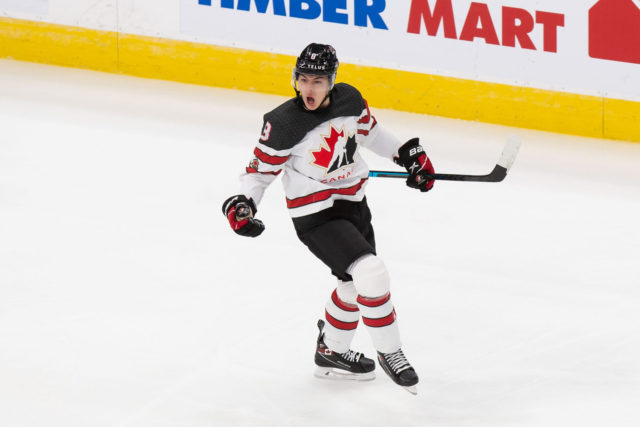 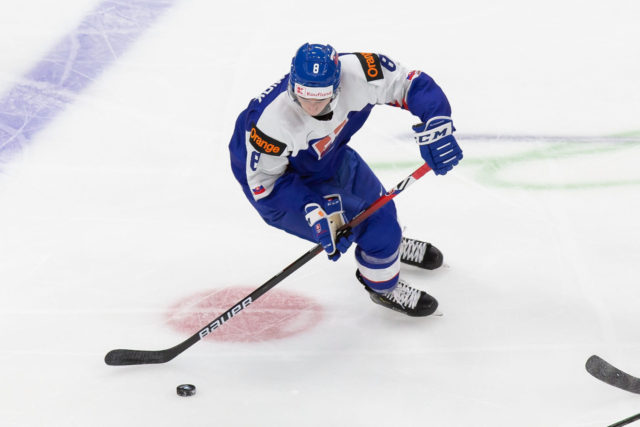 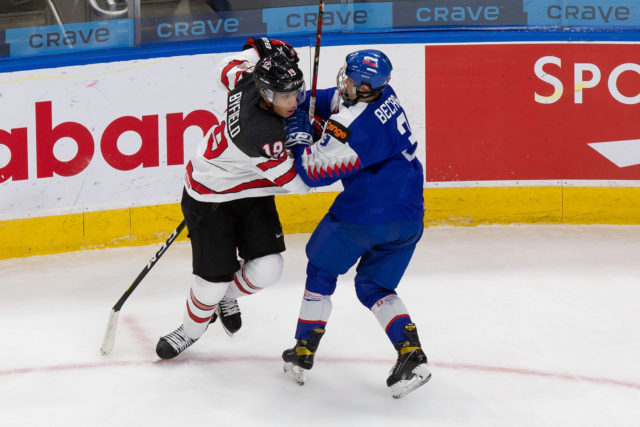