T̶h̶e̶ ̶O̶n̶t̶a̶r̶i̶o̶ ̶R̶e̶i̶g̶n̶ ̶h̶a̶v̶e̶ ̶o̶f̶f̶i̶c̶i̶a̶l̶l̶y̶ ̶a̶n̶n̶o̶u̶n̶c̶e̶d̶ ̶t̶h̶e̶i̶r̶ ̶s̶c̶h̶e̶d̶ The LA Kings have officially announced their schedule, consisting of 56 games, for the 2020-21 NHL season. The schedule feels like an AHL format, with the majority of games consisting of back-to-back games against the same team, similar to trips taken at the minor league level.

The schedule, designed with safety and minimizing travel in mind, does exactly that. The Kings will play 28 games at STAPLES Center and 28 games on the road, with eight games apiece against seven different West Division foes.

With the exception of games against Anaheim, every Kings game this season will be a part of a set of two. The eight games against the Ducks, considering the proximity between the two teams, are spread out a bit differently, with a pair of one-off games, one set of two and one set of four.

The Kings will play 8 games in January, 13 games in February, 14 games in March, 16 games in April and 5 in May. Talk about backloaded! 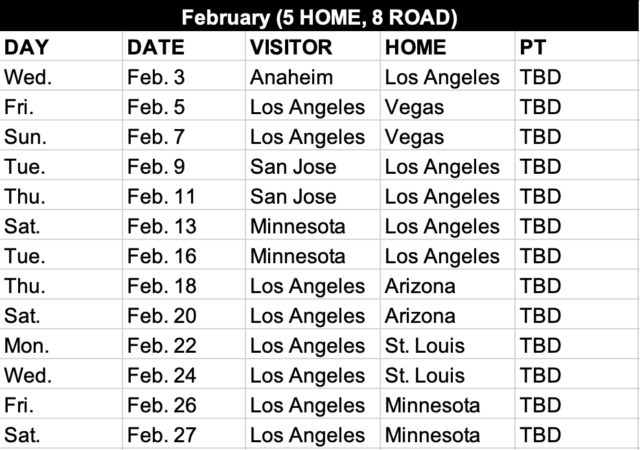 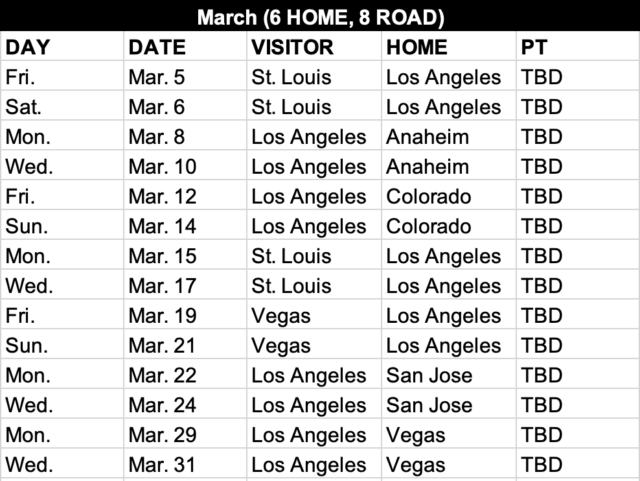 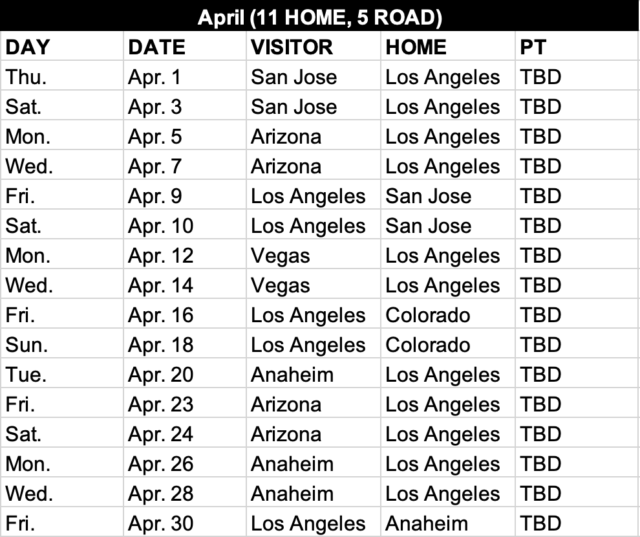 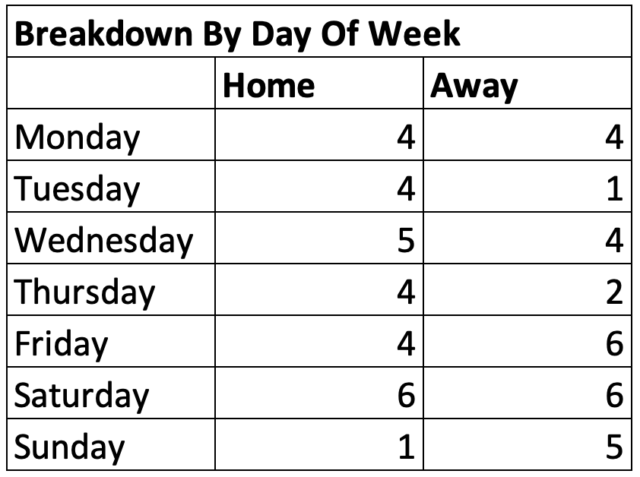 – Okay, so this isn’t quiteeee an AHL schedule, because there aren’t 90% of games on the weekend. However, the most popular day of the week for the Kings this season will be Saturday, with 12 games (6H, 6A) on Saturdays. The Kings play more Saturday home games than any other day of the week, with LA playing six games away from home on both Friday and Saturday.
– Exactly half of the Kings schedule will take place on the “weekend” (Friday, Saturday, Sunday), with the additional 28 games taking play Monday – Thursday.
– If Sunday is the lord’s day, then the lord does not live at STAPLES Center. The Kings will play five of their six Sunday games away from home, hosting just one Sunday game this season (3/21 vs. VGK). Of their six Sunday games, all but one occur in the first 33 games of the season.
– Workday games are fairly well spread out in terms of home games – The Kings play four home games on each day, Monday – Friday, with the exception of five Wednesday home games.

Flavor Of The Month 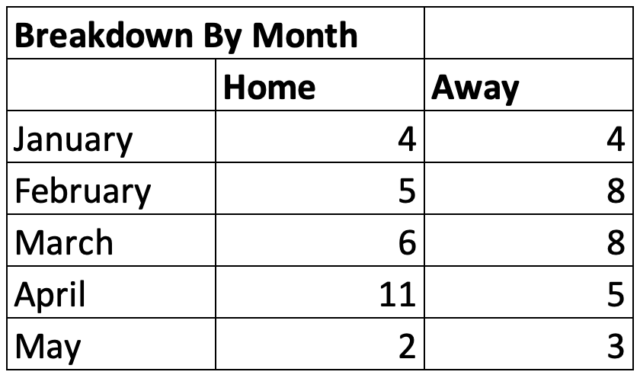 – The busiest month, both at STAPLES Center and for the Kings in general, will be April, as the Kings play 11 home games and 16 total games during the month. The 16 April games are a franchise record for the Kings, surpassing the 14 games played during the 1994-95 season.
– The busiest months for travel will be February and March, with the Kings playing eight away games in both months.
– Los Angeles opens the season with a four-game homestand, one of four, four-game homestands on the season. The longest homestand, however, occurs in April, when the Kings will play five consecutive home games.
– The Kings will also take on a six-game road trip, their longest trip of the season, in February. The trip consists of two games against Arizona, St. Louis and Minnesota in that order, from Feb. 18 – Feb. 27.

Back-To-Backs
– Although the majority of the season schedule is centered around playing teams in back-to-back games, the Kings will play just nine true “back-to-backs”, meaning games on consecutive nights. Eight of those nine sets will feature the same opponent on both ends, however the Kings will play two back-to-back sets with different foes and travel in between. In March, the Kings visit Colorado on Sunday, March 14, followed by a home game on Monday, March 15 against St. Louis. One week later, LA hosts Vegas on Sunday, March 21, followed by a road date against San Jose on Monday, March 22. This season marks the fewest back-to-backs since the 2014-15 season (9).
– During the 2019-20 season, the Kings had 15 back-to-backs on the schedule, though only 12 were fulfilled due to the cancellation of the remainder of the NHL season. Just three of those 15 sets were in the same city, although if you don’t want to count New Jersey to New York as a travel day I wouldn’t blame you.
– Just three times last season did the Kings play the same opponent twice in a three-game span, with back-to-back games against the same team appearing exactly zero times. This season, obviously unique, features that almost exclusively. This happens exactly 26 times this season. An imbalance if I’ve ever seen one.
– I think the four-game set between the Kings and Ducks right at the end of the season deserves some sort of special recognition. We don’t know what those games will mean, we don’t know yet what will be on the line. But four games in six days between the same teams, who are separated by mere miles, could lead to some serious Freeway Faceoff Fireworks. That’s right, we just added another F to a rivalry that already featured some solid alliteration. Almost of equal significance, the Kings play their only one-off games of the season against Anaheim on 2/3 and 4/20, both at home.

Odds & Ends
– This season’s schedule dodges many major holidays that might typically feature Kings games, however, not quite all of them. The Kings will play on St. Patrick’s Day, home against St. Louis, in an overload of St.’s. Los Angeles will host San Jose on April Fools Day. The Kings will also play games on days that are scheduled to host the Super Bowl (2/7) and the Kentucky Derby (5/1). The 2/7 game in Vegas is just encouraging us all to place some bets now isn’t it……
– It will not be the first time seeing some familiar faces, but the Kings will square off against several former Kings this season in divisional play. We’ll see two members of the 2019-20 Kings in opposing uniforms – Kyle Clifford and Alec Martinez. The Kings square off against Clifford and the Blues for the first time on 1/23 in St. Louis, and the first time at home on 3/5. Martinez and the Vegas Golden Knights host the Kings for the first time on 2/5, while the former LA blueliner returns to STAPLES Center on 3/19. The Kings will also faceoff against former goaltenders Martin Jones (SJ) and Darcy Kuemper (ARI) in the divisional-only format.
– May Day! – The Kings are 1-1 in franchise history in regular-season games played during the month of May. LA defeated Winnipeg, and lost to Chicago, in May of 1995.

There we have it – Camp scheduled to open on 12/31, regular-season action to follow exactly 14 days later. Game on!