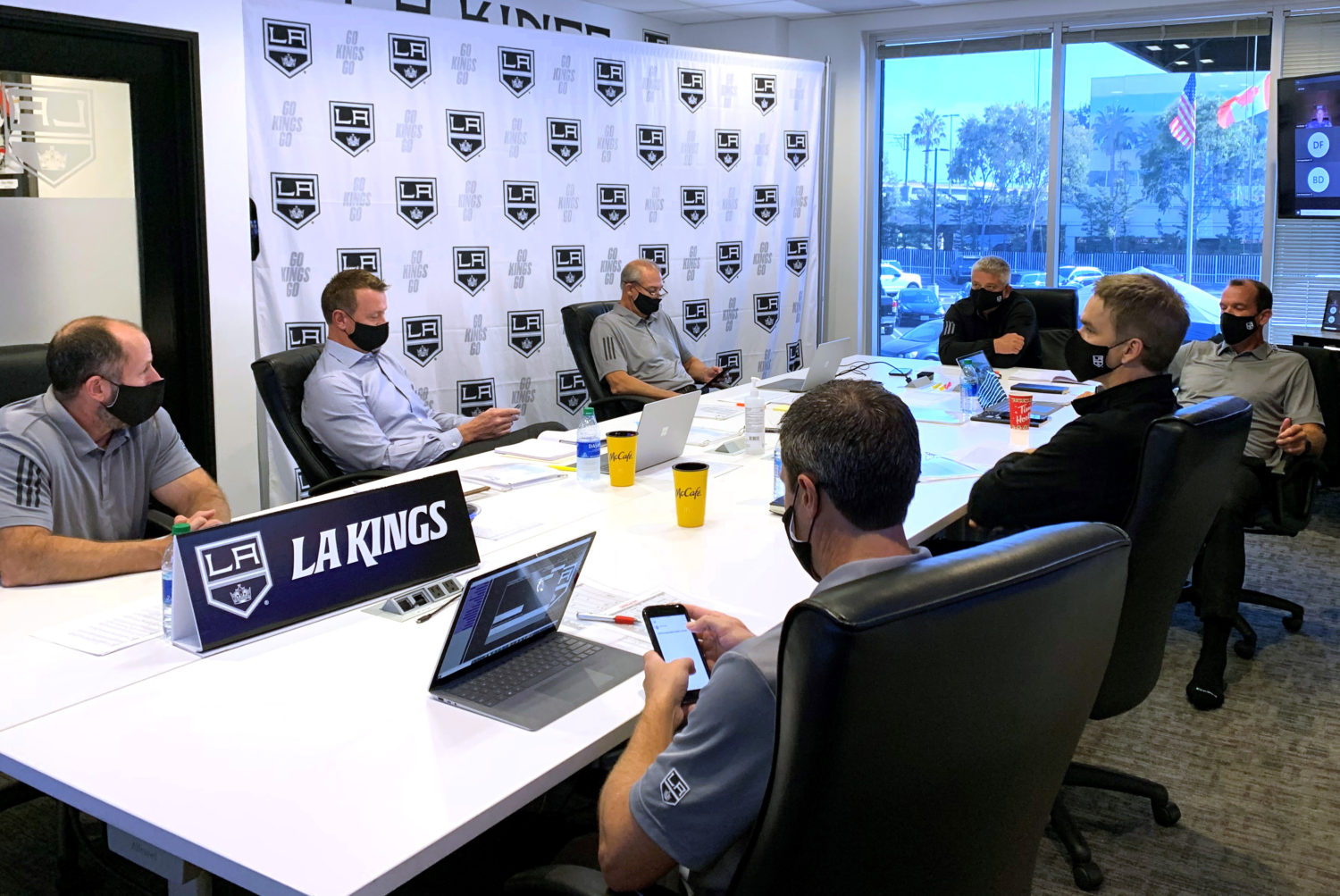 The LA Kings entered day one of the 2020 NHL Draft with the second overall selection and exited with a potential franchise center, after selecting Quinton Byfield from OHL-Sudbury.

The speculation that seemingly ran day-to-day, as to who the Kings would select with their highest draft pick since Drew Doughty joined the organization in 2008, came an end as General Manager Rob Blake stepped to the microphone and selected Byfield earlier this evening.

Byfield collected 82 points (32-50=82) and a plus-26 rating in just 45 games last season with the Sudbury Wolves of the Ontario Hockey League (OHL). He tied for fifth in the league in points-per-game (1.82) and led the Wolves in points, assists and plus/minus while finishing second in goals.

When did Quinton Byfield become the selection for the Kings? 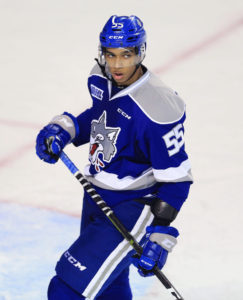 For most of us, the time we knew that Quinton Byfield was when Rob Blake made the announcement live on NBC Sports.

That speaks to a number of things, including there not necessarily being a national consensus surrounding the second overall selection. Byfield was the pick for many, more often than not, but consideration in the media was also given to Tim Stutzle, the German winger who was selected third by Ottawa.

Byfield noted that he spoke with the Kings multiple times, speaking with several different members of their staff, which indicates that it wasn’t exactly a surprise that he went to LA. He felt that things went well in those meetings, resulting in the eventual selection.

“I think I did 3 or 4 zoom calls with their scouting staff, general manager and coaches,” Byfield said. “I got to know them quite a bit, they asked me a lot of questions, mostly hockey related. I thought there were some really good conversations we had.”

Ultimately, it never came down to one particular thing that made Byfield the pick at second overall, but rather a larger set of reasons within the organization.

“We had a lot of different criteria that we based it off of,” Blake said. “Every person on the staff had a voice in it, they all give their opinion, much debate back and forth, and then you make your decision off of the facts and information that you have.”

“It definitely means a lot to me, and being in the record books is something special,” Byfield said. “My dad and my mom never played hockey, they didn’t have too much knowledge about it, so kind of just growing the game together. It just goes to show that there’s a lot of opportunity for everyone in the world and that you can play any sport and be successful with it.”

Twice when asked in his media availability, Byfield commended the efforts that the NHL has made in their efforts to diversify the game and change hockey culture. He noted his interest in being a part of what the Hockey Diversity Alliance is doing, and setting himself up to be a positive role model for young, aspiring black hockey players.

“As I said before, the NHL’s doing a really good job with being inclusive and the awareness they’re getting out,” Byfield said. “I think it’d be really nice if I got involved in that and spread the positivity, be a positive role model.”

The 18-year-old forward also talked about his relationship with Akil Thomas, who he was teammates with during the 2020 World Junior Championships. Thomas, a fellow black player, was selected by the Kings in the second round in 2018.

“We got the chance to play with each other on Team Canada, we were definitely close buddies there and hung out quite a bit,” Byfield said. “It will be cool to see him again, and hopefully play with him one day. That will be something special. He was giving me a bit of a rundown on LA, what to expect, and I’m excited for that. He’s said nothing but great words about the organization.”

Did the Kings explore trading back into the first round? 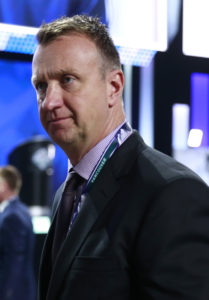 The Kings entered the day with the second overall selection and a set of ten picks in rounds 2 through 7.

With three of those picks coming on Day 2, including the 35th overall selection, did the Kings consider trying to turn some of that ammunition into another first-round selection? Perhaps, but as Blake noted, it may be easier said than done.

“It’s difficult to get into the first round without having a first-round pick later on, trying to move up and down,” Blake said. “We looked at all those different options, the movement within the second round, I think with three picks, gives you the ability to do both, either get up or come back with the available picks.”

Now that the first round has come and gone, the Kings enter tomorrow with three picks in the second round. Will Blake plan to use all three of those selections during tomorrow’s Day 2? We will need to wait and see.

“We’ll let that unfold,” Blake said. “There are some players Mark has circled at certain layers that we want to make sure we get. Now, if those players are available without having to go up to get them, we’ll look at those scenarios, or if those players are gone, can you move back to acquire something else there. Like I said, Mark has a lot of different strategies laid out, and how it could unfold. Our list so far has been pretty good with the players being taken off of it, so we’ll go back and adjust now.”

What is Byfield’s expected NHL readiness coming out of the draft?

Blake stated when the Kings won the second overall pick during the NHL Draft Lottery that being NHL ready in 2020 was not a necessity when selecting the player in that slot.

“We’re not in a position where we’re forcing someone into the lineup,” Blake said. “When they’re ready, those opportunities will come…whatever is best for development is the path we look at.”

When looking more specifically at Byfield, Blake noted that physically, he is ready to play in the NHL, but there’s more than simply physical attributes that go into playing in the league immediately. The Kings General Manager noted that there are a lot of factors in play, including the other options available, such as the state of the OHL and tournaments such as the World Juniors.

“Well, physically, I think he has the ability to step in and play in the NHL with his size and his skating ability,” Blake said. “Now, there’s a lot more that goes into it. The uncertainty on the games, when we’re starting, what will happen in the OHL where he’s currently playing, the World Juniors. I would say, all of the players drafted at that type of level, there’s always a look at them to see if they project to be in the NHL as soon as next year. His size would do that, but there’s a lot more that goes into it.”

For his part, Byfield feels that he has the ability to play in the league as soon as 2020.

“I’m a pretty confident guy, and I have a lot of confidence in myself,” Byfield said. “I definitely think I can step into the NHL next year, but I know it’s a really big jump from the OHL, and very challenging. Coming from every league gets harder and harder, and it’s playing against and with the best players every night. It’s definitely going to be really challenging, but my whole offseason I’ve been working with pros quite a bit and it’s helped me to translate easier.”

The Kings are scheduled to make 10 picks on Day 2 of the 2020 NHL Draft. For all the info on tomorrow’s events, click here. More coverage to come on Day 2 here on LAKI! 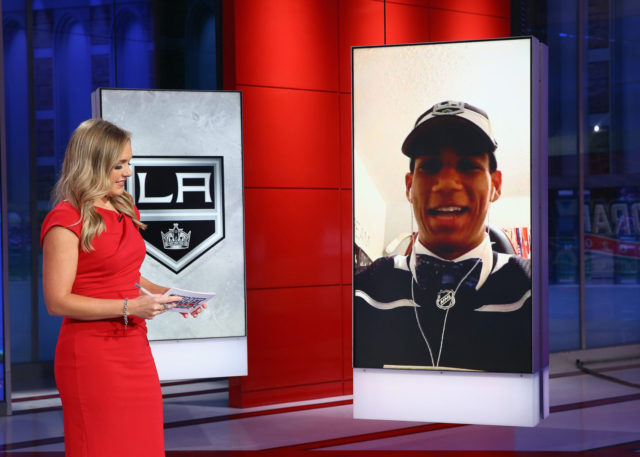