The LA Kings enter the 2020 NHL Draft with the second overall selection and 11 picks in total. The draft will be held virtually for the first time and take place over two days beginning with Round 1 at 4 p.m. PT on Tuesday, Oct. 6, and Rounds 2-7 starting at 8:30 a.m. PT on Wednesday, Oct. 7. NBCSN will provide live televised coverage in the U.S. on Tuesday, followed by NHL Network on Wednesday.

The LA Kings secured the second overall selection on June 26 after winning one of three drawings at the 2020 NHL Draft Lottery held at NHL Network’s studio in Secaucus, New Jersey.

This year marks the fourth time in franchise history the Kings will have the second overall selection (also 1981-Doug Smith, 1986-Jimmy Carson, 2008-Drew Doughty) and fifth time having picked in the top two positions after selecting first overall in the franchise’s inaugural season in 1967 (Rick Pagnutti). This is also the most picks LA has had in one draft since the format was changed and reduced to seven rounds in 2005. The last time the team had 11 picks was in 2002 when it was nine rounds. 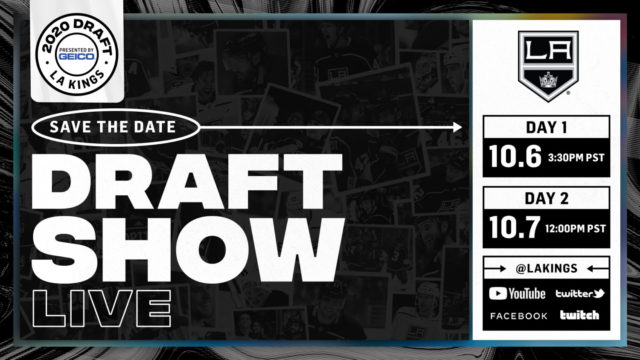 LA Kings Live Draft Shows Presented by GEICO
The LA Kings will be hosting two shows for Kings fans on both Day 1 and Day 2 of the 2020 NHL Draft. The show is scheduled to air live at 3:30-4:45 p.m. on Tuesday and 12-1:15 p.m. on Wednesday and will feature special guests and hosts. Viewers can also tune into the shows for a chance to win an LA Kings Prize Pack. The shows can be viewed on the LA Kings YouTube, Facebook, Twitter and Twitch accounts.

All The Kings Men Live
An LA Kings podcast with regular hockey updates, this week’s video episode published earlier today can be seen here and features Director of Amateur Scouting, Mark Yannetti. The segment was taped last night as part of a Season Ticket Member benefit and special draft preview.

LA Kings Insider
Zach Dooley will be covering the draft for LA Kings Insider, which provides fans with editorial content regarding the team’s latest developments. Follow along on Twitter (@LAKingsInsider) and online at lakingsinsider.com for all the latest news.