By Zach Dooley For LAKingsInsider.comAugust 17, 20200 CommentsUncategorized
via USA Hockey

The LA Kings had already settled on a new direction for their AHL franchise, the Ontario Reign, for the 2020-21 season. Today, they settled on the man to lead it – John Wroblewski.

With an influx of first-year North American pros, joining a hefty group of what will be second and third year professional players expected to make up the bulk of the Reign roster, development will be a higher focus than ever, as the organization looks to grow the group of 20, 21 and 22-year-old players into the LA Kings of tomorrow.

“We fully understand what we’re going to assemble in Ontario, and eventually develop those prospects into the next Kings players,” Kings General Manager Rob Blake said.

Enter Wroblewski, who brings a unique blend of experience to the Reign. For the past four years, the 39-year-old has developed some of the most promising American talent in recent history, as a head coach with the United States National Team Development Program, leading the U-17 and U-18 programs. Prior to that move, however, Wroblewski spent two seasons in the AHL (with the Rochester Americans) and three in the ECHL (with Gwinnett and Wheeling), working with professional players at the highest levels of minor league hockey. 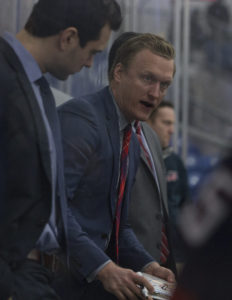 Wroblewski with the USA NTDP U17 Team

It was Wroblewski’s unique background that drew the Kings towards him in the hiring process.

“We really came to appreciate and respect the scope of work that John has, and in the timeframe that he’s done it,” Ontario Reign General Manager Rich Seeley said. “He’s been an intern and an assistant with the NTDP, an assistant in the ECHL and he’s had a lot of success as a head coach in the ECHL, as a Coach of the Year. He’s had some AHL assistant experience and most recently as [a head coach] with the NTDP, with some international experience. I think all of that experience will really serve him well as he leads our AHL coaching staff. [We’re] excited to have John as a part of the Kings and Reign organization.”

As for why Wroblewski viewed the Reign job as one of interest, well that much is pretty obvious. Today’s Reign players will be full of high-promise, younger players, with long-term NHL ambition. It was a coveted job that he was happy to get.

“I was ultimately so excited about this opportunity was the responsibility of taking on these players and helping Todd McLellan and the LA Kings realize the potential of these young men, and make the most of it,” Wroblewski said. “That’s the big intrigue of this job.”

Wroblewski is an important hire for the Kings, because of the hands-on role he will have with one of the NHL’s top prospect pools, and one of the strongest groups of young players in LA Kings history.

There’s a likelihood that several top prospects will play their first North American professional games this season with Ontario, while a group of returning players will look to build upon a strong 2019-20 Reign season, and make the transition from rookies to strong AHL contributors, and eventually NHL players.

“The most important thing we get from our athletes is a 100% commitment to what they’re trying to accomplish, and that’s being the best person and player they possibly can be,” Wroblewski said. “The best way to do that is through various methods of communication. Being able to work with a young man 1-on-1, being able to gain his trust and communicate that I care about his future and [want to] make him the best person and player he can possibly be. One hundred percent committed to being what he wants to be in life and that’s what we want here in hockey players, and that’s what we’re after.”

One of the immediate challenges for Wroblewski and his staff will be the balance between a focus on player development and success in terms of wins and losses in the AHL.

It’s always a balancing act for an AHL bench boss. There’s a desire for both coaches and management to have success in the American Hockey League, and to have prospects playing in important and meaningful AHL games, to prepare them for similar situations in the NHL. There’s also, however, the fine line between managing the minutes of veteran contributors and prospects needing to play in certain situations.

Wroblewski won’t be judged off of prioritizing one over the other, but rather he’s been tasked with achieving in both regards.

“Well, definitely there’s a balance between the development and ultimately winning, and we’re going to demand both,” Blake said. “It’s a tough job in that type of position, and we understand what we’re trying to accomplish, with the understanding of putting these young players in situations where they’re going to help the team win, but they’re also going to grow as a player, to be able to step in at the right time. I think a lot will be judged on the values that we feel are important for our franchise, and we’ll take that as we go.”

The Notre Dame alum and his staff – which, as announced today, will include Chris Hajt, Matt Millar and Brad Schuler from last season’s Reign staff, but not Jaroslav Modry, who will be replaced with a new assistant coach – will be tasked with succeeding in both areas with a young group of players.

The Reign are expected to have a continued influence from the development team, which is a benefit of having NHL and AHL teams practicing in the same facility. Blake added on the call that he sees that the development crew functioning as it did this past season, working as a part of the Reign’s overall plans.

On the ice, Wroblewski didn’t shy away from defensive responsibilities, but noted that his teams in the past have been known as being offensively driven. He has coached NTDP teams to historic heights offensively, a trait that he hopes can continue with the Reign.

“A lot of the teams that I have coached, the calling card is to end up with the puck in the back of the net,” Wroblewski said. “The teams that I’ve coached have set quite a few records at the NTDP, we score goals and we score them in a variety of ways. We go to the hard areas, but we’ll be thorough and details in our line rushes too.”

Jiving with that, as we look ahead to a 2020-21 Reign season, we can think about how a Wroblewski-led team might look on the ice, it all came down to one word.

“We want to be an attack team in all facets, and that starts in everything you do,” Wroblewski said. “It has everything to do with how you carry yourself as a pro, how you enter the room each day, in the weight room, the vibe you give off to the staff. Everything is in attack mode.”