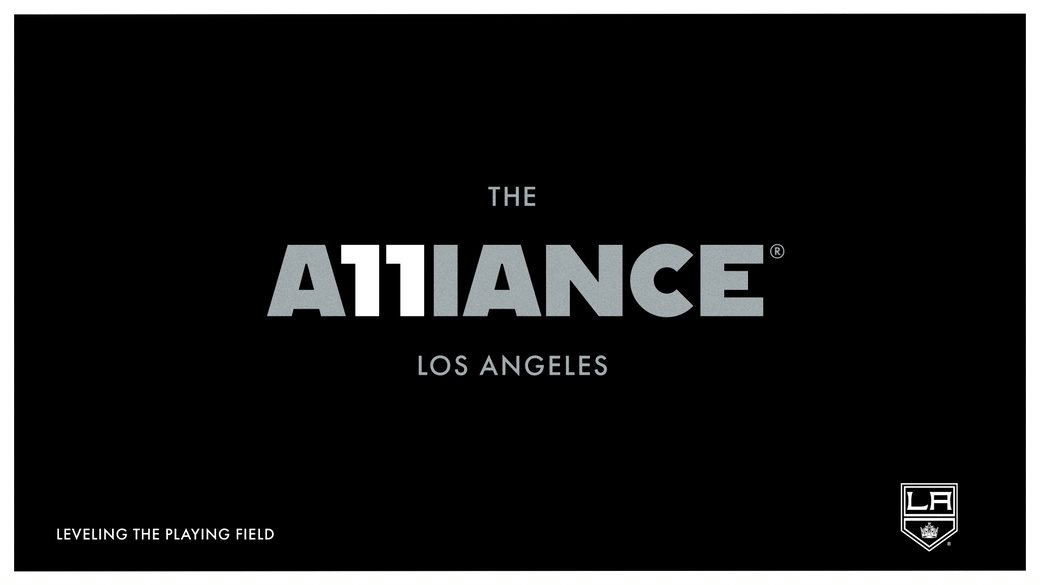 The LA Kings announced this morning that the organization has joined “The ALLIANCE: Los Angeles”, as a part of the organization’s inclusion initiative. As a part of their efforts, the Kings have created “The LA Kings Inclusion Initiative”, a program designed to contribute to building equity in sports and within the front office, while helping to eradicate racism in and around the world of hockey.

Blake Bolden on The ALLIANCE: Los Angeles
This is such an exciting announcement. The Kings are very proud, and me personally, I am so excited about The ALLIANCE. We are here because of sports, and sports are such a positive in people’s lives. I’m a sports fan, I’m a professional athlete, and from pro sports all the way to youth sports, it brings people together. While sports teams do hold a special place for fans, as an athlete, we can work to create more opportunities in youth sports for young people who have been left out. Looking back, it was just a coincidence that I played hockey. I was the only black person in every rink that I went to, black women included. My mom just so happened to date a man that loved the game of hockey, I was brought to games, I watched it, and those players inspired me to say “hey, I want to pick up a stick.” Growing up in a black community, it was evident that the challenges and the access that I have, it just wasn’t fair, and I don’t want it to be a coincidence anymore for more black and brown kids to be playing more sports. That just goes against everything that we stand for, those unfairnesses. We are committed to doing more and more, getting involved in meaningful ways as allies in the fight against racial injustices. We want to level that playing field, drive more opportunities for youth in sports, because sports have that powerful impact on youth. With The ALLIANCE, this is a chance to show the real power of sport.

Blake Bolden on making hockey more inclusive
It’s truthful that hockey is a predominantly white sport and with that, we are just really trying to eradicate racism around the world of hockey, and really create some inclusion within our game. I think, number one, we just have to be diligent in expressing to our fans that we want to diversify and we want to bring people of color into our game, because representation matters. I think going out there in the community, having ball hockey initiatives, working with YMCA’s and other LA public schools is something that we’re definitely going to do, and we have a lot of initiatives coming up. We just launched our LA Kings Inclusion Initiative today, which we’re really excited about, and I think with our executive committee, you’ll see a lot of things coming out of the LA Kings and I’m sure with the Ducks as well.

From The LA Kings –

The LA Kings, in conjunction with today’s historic announcement of THE ALLIANCE: Los Angeles program, have announced the creation of a new organizational initiative – The LA Kings Inclusion Initiative – a program designed to contribute to building equity in sports and within the front office, while helping to eradicate racism in and around the world of hockey.

The LA Kings Inclusion Initiative will work in conjunction with THE ALLIANCE: Los Angeles but will be a stand-alone initiative specific to the LA Kings organization and anchored by the following areas of action:

The goal is to contribute to the fight to end racism by tackling the systemic issues in our city and industry, while creating opportunity and equity in hockey. The LA Kings Inclusion Initiative also aims to further align with key allies in our game and sports overall, and this Initiative will include all aspects of the organization down to our affiliates with Ontario and into our development systems.

“Diversity and Inclusion are critically important for our organization. Amidst all of the outcry that was amplified with the murder of George Floyd and countless others, and the recurring evidence of systemic racism in our society, we have devoted an enormous amount of time looking inward at our organization and our sport at all levels here locally in Los Angeles,” said LA Kings Chief Operating Officer Kelly Cheeseman. “It is clearly evident that we can do more to contribute to systemic change.”

The initiative will be guided and influenced by Blake Bolden, who joined the Kings approximately six months ago as an AHL scout. Bolden will now serve as AHL Scout/Growth and Inclusion Specialist. She will retain her scouting duties while working in partnership with Kings executive leadership, Kings Care Foundation and Hockey Development departments to define diversity and inclusion initiatives both internally and externally.

“We’ve definitely been working,” Bolden said. “The Kings Executive leadership has responded quickly and are working diligently to prioritize the eradication of racism and inclusion in our game. Personally, these initiatives give me tremendous hope for the future.

“My hiring 6 months ago is a perfect example of the many contributions made to promote diversity in our sport. I am honored to work closely with an organization that has been and continues to do great work to create systemic change.”

The Kings will announce more specific details of the LA Kings Inclusion Initiative in the coming weeks, including the organization’s first-ever free, week-long youth hockey camp. 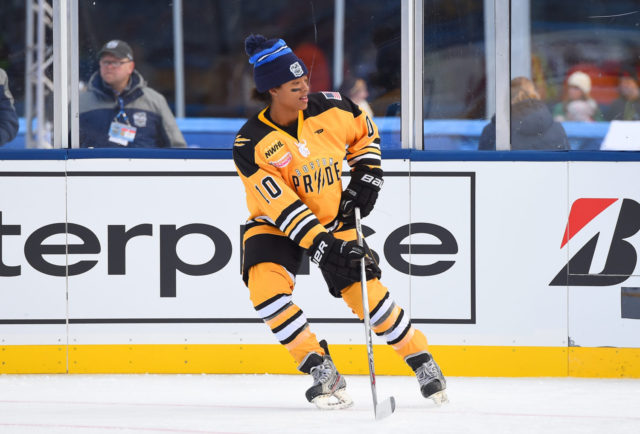 From The ALLIANCE: Los Angeles –

In a collaboration to pursue change in communities of color and develop meaningful programs, the 11 professional sports organizations in greater Los Angeles have joined together to launch The ALLIANCE: Los Angeles, a comprehensive five-year commitment to drive investment and impact for social justice through sport.

“The ALLIANCE: Los Angeles has been forged specifically to create positive change in underserved communities, with an emphasis on Black communities,” said a spokesperson for The ALLIANCE: Los Angeles. “All 11 teams are united in their dedication to this effort and recognize driving change is a long-term commitment. Through sports and social programming, we aim to work in communities to affect structural changes on levels that have a lasting impact.”

The ALLIANCE: Los Angeles is partnering with the Play Equity Fund to manage this initiative in greater Los Angeles.

A 501(c)3 public charity, the Play Equity Fund was established in Los Angeles to drive social change across communities through sport. It is the only nonprofit worldwide dedicated to Play Equity as a social justice issue to bring the transformative power of sport and structured play to youth – regardless of their race, socioeconomic status or gender – who have been left behind by the current system.

The Orange County-based franchises will expand upon their established partnership of investing in organizations and programs making positive change. Formed in 2013 by the Ducks, Angels and Disneyland Resort, the Accelerate Change Together (ACT) Anaheim collaborative was created to address the urgent needs of Anaheim’s at-risk youth and families.

“The ALLIANCE: Los Angeles is an unprecedented collaboration by sports organizations recognizing the impact they can have by working together, and they should be commended for seeking to make significant changes in communities of color,” said Renata Simril, President of the Play Equity Fund. “The Los Angeles region is one of the world’s most competitive markets, and sports is one of the world’s most competitive industries. But these organizations are putting their competitive instincts aside to work collaboratively for social justice.”

The term social justice can be broadly defined as the degree of fairness or justice in the opportunities and access to resources, wealth, political representation, and privileges within a given society. In neighborhoods with high poverty rates, opportunities to play – a globally recognized fundamental human right of childhood – oftentimes do not exist, particularly for kids of color.

Barriers include the elimination or reduction of enrichment of programs, budget challenges for afterschool programs including sports, safe passage to playgrounds, transportation, lack of trained and well-paid coaches and the rising costs of athletics and intramural programs. These factors severely limit access and opportunities for kids of color to build a pathway to lifelong wellbeing. The pro teams of the ALLIANCE: Los Angeles are united in their determination to combat this injustice.

The ALLIANCE: Los Angeles and the Play Equity Fund will hold a Sports for Social Justice Symposium on July 22, to coincide with National Youth Sports Week, which is July 20-24. This webinar will include leaders from the sports organizations, as well as social justice leaders and sports commentators.

This article was updated with quotes from Bolden from today’s The ALLIANCE: Los Angeles media call. 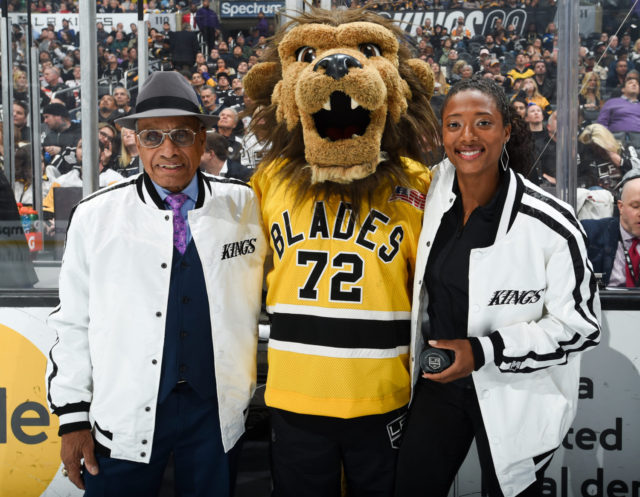