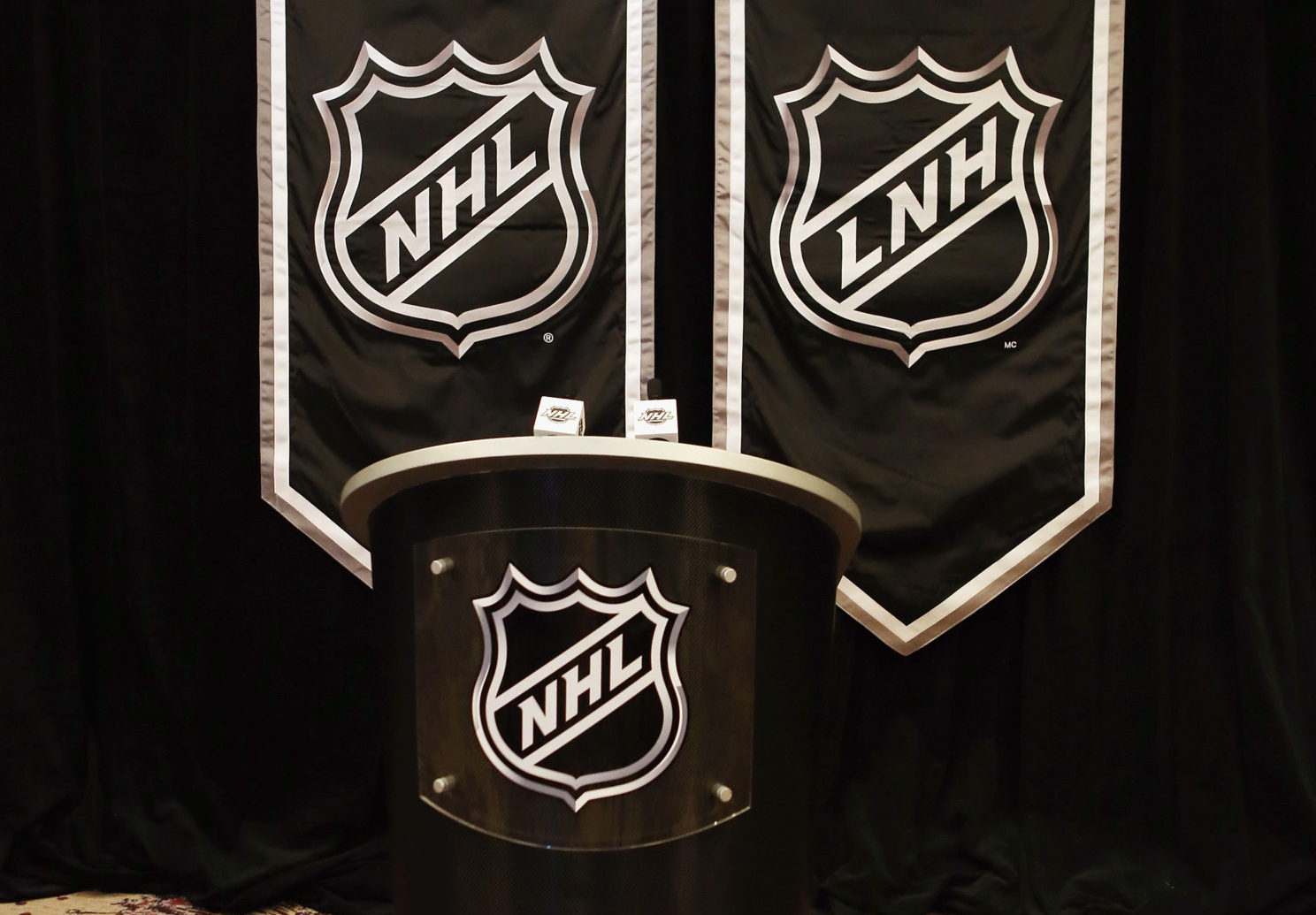 The NHL and NHLPA announced this afternoon that the two sides have agreed to a four-year CBA extension, as well as a scheduled date for the 2020 NHL Draft, Phase 2 of the Draft Lottery, and the return to play for the 2019-20 NHL season.

The biggest pieces of information from the Kings point of view are the CBA extension, which holds labor peace through September 2026, and the date of the NHL Draft, to be held on October 9 and 10, during which the Kings will have the opportunity to select a franchise-changing player at second overall.

Some of the key bullet points from today’s release –

– The Kings will return to NHL action, in draft form, on October 9 with the 2020 NHL Draft. LA holds the second-overall selection, as well as several Day 2 picks. The Kings will determine the team that selects in front of them on August 10, the day before the First Round proper of the Stanley Cup Playoffs, in Phase 2 of the Draft Lottery. Phase 2 will feature the eight teams that lose their best-of-five series in the qualifying round.
– With the new CBA, the NHL Salary Cap will remain at an upper limit of $81.5 million, until preliminary hockey related revenue (HRR) for the just completed League Year surpasses $3.3 billion. Once HRR exceeds $3.3 billion, the the cap ceiling will rise on a pro-rated basis, based upon certain perimeters related to HRR. The cap floor will be set at $60.2 million for the 2020-21 season.
– The Olympics! “The NHL and the NHLPA commit to participate in the 2022 and 2026 Winter Olympics, subject to negotiation of terms acceptable to each of the NHL, NHLPA, and IIHF (and/or IOC).
– There are a ton of additional alterations to contracts, trades, free agency, etc. For more on the additions/subtractions/changes to the CBA, check out Bob McKenzie, Elliotte Friedman & Frank Seravalli for a rundown on Twitter.

The Kings will not participate in the NHL’s Return to Play, but the league also provided details surrounding the return to action, which is slated to begin on August 1. The Stanley Cup will be awarded no later than October 4. 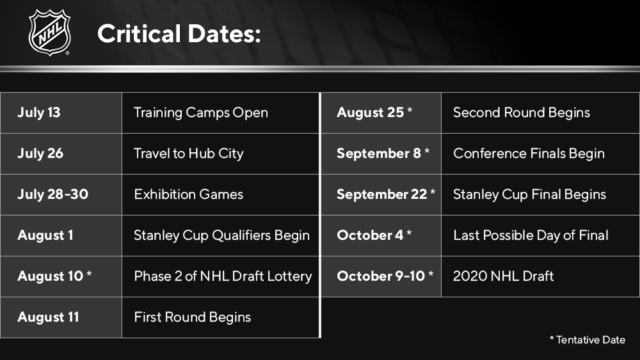 Game Schedule
Games have been scheduled on a staggered basis, providing hours of continuous action. The start times for the 10 days of Stanley Cup Qualifiers in Toronto (Eastern Conference games) will be: Noon, 4 p.m. and 8 p.m. ET. In order to maximize the viewing experience for fans across North America, the start times for the three game windows in Edmonton (Western Conference games) – 2 p.m. ET, 6:30 p.m. ET and 10:30 p.m. ET – may fluctuate by up to 30 minutes during the qualifying round.

The Stanley Cup Qualifiers featuring the 16 teams that are contesting best-of-five series to determine the eight teams advancing to the Stanley Cup Playoffs, commonly referred to as the qualifying round, will begin on Saturday, Aug. 1, with five games: three in Toronto (Carolina vs. NY Rangers, Florida vs. NY Islanders and Montreal vs. Pittsburgh) and two in Edmonton (Chicago vs. Edmonton, Calgary vs. Winnipeg).

The Stanley Cup Qualifiers featuring the top four teams from each conference to determine seeding in the Stanley Cup Playoffs, commonly referred to as the round robin, will begin on Sunday, Aug. 2, with two games, one in each hub city: Boston vs. Philadelphia (at Toronto) and Colorado vs. St. Louis (at Edmonton).

Broadcast Information
A complete broadcast schedule will be released in the coming days.

Statistics
For statistical purposes only, all games from the 2020 Stanley Cup Qualifiers (round robin and qualifying rounds) are considered part of the 2020 postseason. Accordingly, all skater/goalie/team statistics accumulated in these games will be included in the 2020 player and team postseason stats. Achievements from these games and series will be included on Records.NHL.com.

Teams participating in a best-of-five series during the Stanley Cup Qualifiers are considered to have made the postseason and participated in a postseason series. 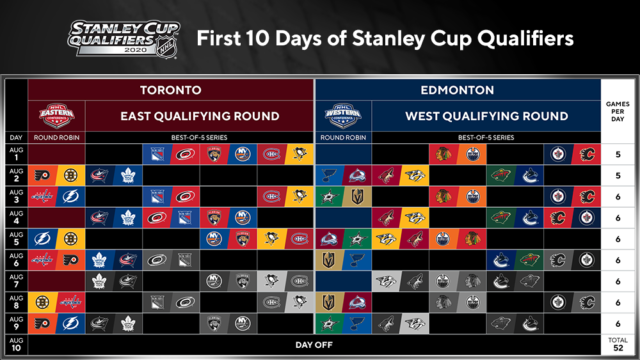