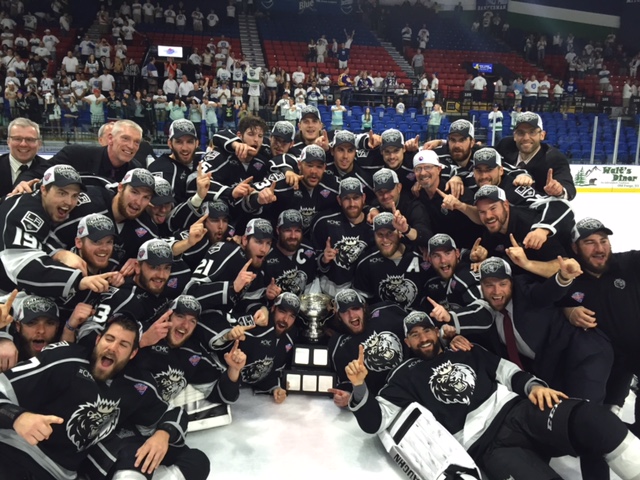 So, it’s disappointing to see Stutts go. The direction the team is heading is understandable. There are a flood of young prospects on the precipice of their professional careers, and just as other parts of the organization have experienced re-boots or re-freshes or re-builds, so too will the AHL affiliate after six seasons under Head Coach Mike Stothers that included a Calder Cup championship and a sequel that produced a none-to-shabby run to the conference final, where they were felled by a Lake Erie Monsters team then went on to win Cleveland’s first pro sports championship in 52 years.

Samuel Fagemo, Akil Thomas, Tyler Madden, Cole Hults and Alex Turcotte will all play their first North American pro games this season, and Rasmus Kupari is looking to build off an Ontario debut halted by a season-ending knee injury. Stothers, who was 220-137-35-13 as Manchester and Ontario’s coach with a championship during a period the team had traded first round picks in 2011, 2013, 2015 and 2016, leaves the team on good terms and the appreciation of those he served under and alongside. The sense I have is that the team sees this as a very important juncture in its prospect development, one in which they want to continue to imprint their desired DNA on its personnel. Stothers was plenty qualified at that, and Rob Blake and the LA Kings still view the competitiveness he directly stoked as a core constitutional trait that they seek out and cultivate in their player pool. They’re also looking to boost skill and scoring and maximize the skill set of an important generational group and will search out a new voice to do so.

I do not get the sense that they already have a clear figure locked up for this position. After the realization settled that we weren’t going to work with Stutts anymore, there were a few names that initially came to mind. Among them were Chris Hajt, a current and former Ontario assistant sandwiched around two years on Phil Housley’s staff in Buffalo, and Marco Sturm, an assistant under Todd McLellan. The Kings are not tied to promoting from within, nor should there be an expectation that they will, but off an initial glance, I believe both will draw (or have drawn) some consideration. There are also several younger coaches from the junior ranks that I’d think would draw very serious consideration, as well; I wouldn’t be surprised to see the organization favor coaches with fairly recent experience in college or major junior levels.

More on the AHL gig throughout ::gestures to swath of indeterminate length::

Sad to see Stutts go. One of the best coaches I had . Great guy and great person. Thank you for everything Stutts. Good luck with everything. ⁦@LAKings⁩ ⁦@ontarioreign⁩ pic.twitter.com/XjqFy5LtPt

As for Stothers, I still go back to the 2015 Calder Cup as one of my favorite projects with the Kings. On the way from Manchester to Utica between Games 2 and 3, after the Monarchs won a pair of games in overtime to take a 2-0 lead on the road with them, he chewed out one of the members of the team’s staff when the buses stopped at a poorly equipped rest area in Western Mass like I’d rarely been chewed out in hockey before. (And I’ve been chewed out!)

After celebrating in/sullying the visitors rocker room at the Utica Memorial Auditorium a week later, and some two or three hours into a beer-drenched drive through the night back to New Hampshire, the two buses – one “loud” bus for the players and another for the coaches and staff – stopped at another rest stop so players and staff could restock at a 24-hour convenience mart. (This was approximately when Rob McPherson of KingsVision accidentally booked his return flight to Los Angeles for the following day rather than later that morning. Friends, be careful booking travel at one in the morning whilst celebrating a sports title.)

All players looked alike in their playoff beards, some of which were shorn off by the time we’d left Utica and made recognition difficult. But a hoodied figure I want to believe was Nic Dowd stepped up onto our bus holding a beer while barking/swearing, words that were immediately met with an even longer and more aggressive string of profanity from Stothers. They weren’t fighting, they were celebrating, and while I don’t remember the exact words that were shared, the demonstration of care as part of the fraternal bond between player and coach was exposed. Stutts wasn’t going to let a non-authority figure enter his bus and cause a stir and did so in a way that conveyed more about what he thought about his players than words on a page ever could. (Perhaps he just needed to vent after a weird, weird, weird Utica press conference left him with a self-diagnosed “migraine.”)

Stutts was incredibly helpful to me, to Zach Dooley, to Lindsay Czarnecki and Joey Zakrezewski. He treated us all very, very well. Stutts is a great quote, and we appreciated his candor in the wonderful Bus Texts series, but if you wanted to get a feel for what really catalyzed and pushed him, it was often found in quiet weekday mornings at TSPC adjacent to the media seating area. There, it was where you learned more about Stutts as a family man – Stutts the dad, Stutts the grandfather. There may have been a different tenor in his voice, but his care and best interests for those he was entrusted with resonated.

Today is a tough day. Thank you Stutts for everything. A great coach and teacher, but an even better person and man. You pushed us everyday to become better players and better people and I’ll always be grateful for our time together. Thank-You. pic.twitter.com/TdsjX3Oe1X

Czarnecki: How’s Bissonnette, looked like he went down hard in third after Bickel hit?
Stothers: Biss is fine. He is at the back of the bus telling anyone who will listen how he went in and won the faceoff clean, in the second period. This will be one of the few times he voluntarily comes into my office to watch video, then he will want the clip sent to his dad.

More from Bus Texts:
Stothers on Kempe getting “sewn up” so he “will be back on the cover of GQ magazine as early as the next issue”
Stothers on a “first name gutless, last name stupid” sucker punch
Stothers on Stockton chopping at opponents “like a lumberjack building a log cabin”

How does it feel to beat your biggest rival and head to the the Western Conference Finals? Pretty. Darn. GREAT! #SoCalSeries #CalderCup #playoffs #ONTvsSD