Centers Alex Turcotte and Tyler Madden and defenseman Cole Hults joined LA Kings Television Play by Play Announcer Alex Faust in a Zoom video conference at noon Thursday, marking the first time all three fielded questions since they’d signed with Los Angeles. For Madden, it was his first extended media session since he was sent to Los Angeles in the Tyler Toffoli trade. Let’s get down to brass tacks.

— Stick taps to host Alex Faust, who did an outstanding job as the moderator. It’s not always easy interviewing multiple subjects, let alone those narrowly on both sides of 20. Appropriate time was spent with all three well-spoken players whose personalities were revealed. Faust also also opened the call by expressing how he was looking forward to a “more regular welcome” once professional sports start up again. Good, classy open.

— One quick takeaway was that Cole Hults looked built, more so than before. He thicc:

Was noticing the same thing. Like Cole Hults could kill a dude https://t.co/wbrVYYx4LM

Hults already had a good frame when he entered Penn State as a 19-year-old freshman; he looks like a pro now. It was easy to see that he’s been putting in the work as advertised – as one would expect from a player who put in three years at an NCAA program.

One fitness benefit is that he’s close with fellow Madison native Ryan Suter, who owns the Madison Capitols franchise Hults played for in the USHL. (His general manager and coach in Madison was Garrett Suter, Ryan’s brother.) Hults and a friend have been going over to Suter’s weight room to work out and get out of the house five days a week during quarantine. “Obviously, being from Madison, I grew up around the Suters, so I’ve watched a lot of the Wild and when Ryan was in Nashville. I watched a lot of his game and what he does – I look at him as a mentor to me, so I think I watch him more than anybody else and learn from him.” 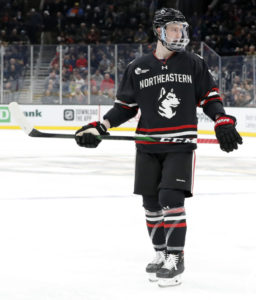 — It was interesting to hear how the players were getting in their needed work with gyms and rinks currently closed. For Turcotte, it was as if he was 14 years old, practicing in the cul-de-sac again. “Yeah, I’ve got some Bauer Rollerblades. They’re pretty nice,” he said. “Going in my driveway, I usually just go out there, roam around and rip pucks. It’s the closest thing I can do to playing hockey. There are no rinks open here, so hopefully when those open up, obviously I’ll be skating, but it’s kind of the best I’ve got right now.”

Madden broke a finger in the game immediately following Northeastern’s Beanpot championship, ending a tremendous 18-game, 14-goal, 30-point run. He’s itching to get back out on the ice – as one would expect from the kin of former character forward John Madden, who earned a reputation as someone hard-nosed and difficult to play against.

Even John Madden’s car suggestions were apparently grating. Though Tyler hasn’t yet been to California, he understands he needs to buy a car. “My dad’s been in my ear, don’t get this don’t get that,” Tyler Madden joked. “It’s been a fun conversation in the Madden household for a while now.”

It brought up a conversation about dads during the quarantine.

Madden: “I mean, I like my dad a lot, but being in the same household with him for a long time-“
Turcotte: “Oh, dude, brutal-”
Madden: “A lot of competitions and stuff between us just to pass the time. Whatever we can do to stay busy.”
Faust: “I get the sense that this is similar for you, Alex?”
Turcotte: “Yeah, I mean, I love my parents, but sometimes, it’s just – oh, my God. Obviously, no one can work, so they’re not working and I’m home all day. And I’m usually not used to being home all day. It’s kind of funny, though. I think I’m going to look back at it and say that I got to spend some time with them.”

— I feel for high school seniors deprived of an opportunity to graduate/be second semester seniors/to play spring sports. I would’ve had a breakdown had I not played varsity baseball senior year, and this was for a team whose league’s baserunning rules specified a dead ball should a player’s yarmulke fall off. So I can’t even begin to imagine how Hults felt as a top defenseman on the seventh-best team in the NCAA’s pairwise rankings when the remainder of the season was canceled, ending a shot at an NCAA championship.

There’s some solace that the Nittany Lions were regular season champs. “At our ending meetings, we were told we were going to get a ring, so I think that helped a little bit. A little bit bittersweet, still, but that definitely helped,” Hults said.

— One final bit. Lots of good quotes below. There was actually a group call Thursday morning between the prospects that are going pro next year – Turcotte mentioned there were eight total on the call – and General Manager Rob Blake. It was important to continue to put faces and names together and was “nice to know you’re not alone and we’re going to have that big young group going in next year,” Hults said.

Alex Turcotte, on playing against Cole Hults and Penn State in the Big Ten:
Obviously we played each other a lot. They whooped us more times than we did to them, so they were pretty tough games. They’re the best team in the Big Ten. Just playing against them, it was challenging, but it was a lot of fun, too. They were a really offensive team, they were running and gunning, and we were kind of the same way. I wouldn’t say there was as much defense being played, but it was a lot of fun. Just playing in the Big Ten, it was an eye opener for me, just because all the teams that are in there, everyone’s pretty good and any given night you don’t know who’s going to win. [Cole Hults: Yeah, it was great. Wisconsin and Penn State always kind ofhad that rivalry, too – they won the tournament the year before I came in, so they’ve always kind of had that rivalry. I’m from Madison, too, so it’s always cool coming back and playing those guys. Obviously, getting the best of them was pretty cool.]

Turcotte, on signing his NHL contract the final day before the coronavirus shut down the NHL:
It was pretty ridiculous. I remember I was on the way to LA, and I had the WiFi on my phone. I was on Twitter and they canceled the NBA season, and I kind of had a bad feeling about with the direction the NHL was going to go with, and the AHL, obviously. So, it was a pretty weird first day, and then the next day I went to the rink and I kind of met some of the guys, but at that point everyone was cleared out. They were taking protocol and stuff, being safe, so it was really weird, but it’s something I’m going to remember forever, for sure.

Turcotte, on getting to know Toby Bjornfot at development camp:
Yeah, dev camp was awesome. That’s when you get to meet all the new guys and all the guys that are going through the same process as you. It’s where I met Cole and a bunch of other people, and you meet the development staff too and get on the ice with them and learn. I think that was a lot of fun, and then with Toby, I played against him those two years in international tournaments. He was always on Sweden. We got drafted together, so I met him at the draft and I took him to Chipotle right when we got to L.A. And I know a lot of people are giving it to me because there’s probably better Mexican food down there. I’m from the Midwest, so that’s all we’ve got here. And he loved it, so there’s no complaints.

Tyler Madden, on how he found out his rights were traded to Los Angeles:
It was weird. I was actually in my dorm room playing Xbox, and one of [inaudible] with Vancouver asked me if I’d heard, and I didn’t really know what he was talking about or anything. He told me and it started breaking a little bit, and I had a couple calls from Rob Blake and everybody from the LA Kings side. But, yeah, it was definitely weird. It kind of surprised me a little bit, but I was excited for the most part to join such a great organization.

Tyler Madden, on taking stock of training camp positional battles:
Yeah – it’s kind of a good thing, though, at the same time, because you know you’re going to be surrounded by great players that make you better. That’s one thing, but for sure, everybody’s going to come in ready to play, everybody wants a spot on the big team. It’s just going to be one of those things for whoever wants it more at that time, and obviously everybody’s got the skill and there are a lot of young players, but it’s exciting, for sure, I think is the biggest thing for me. [Alex Turcotte: I think adding on to that, we’re all going to be competing against each other but that’ll make us all better players. In the long run, at least, it’ll make us a lot better, and that’s how we can build friendships and become buddies. I think all of it’s going to be great. Yeah, there’s a lot of competition, but we’re going to be friends, too, and it’ll only make us better.] 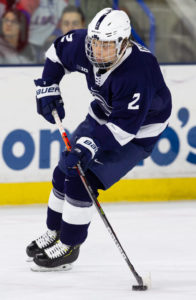 Cole Hults, on his low-maintenance reputation:
The last few years my game’s only gotten better in what I do well. I think going into school, I always had the simple mindset of wanting to get the pucks to the forwards. My brother always told me when I was younger I can make a great first pass – I’m Bobby Orr to him – so that’s my motto since I was like 16 when he told me that. It just kind of accumulated over the years. I like to play a simple game, I want to get pucks to guys like Madden and Turcotte, and it just worked out well. I like to compare my game to Ryan Suter’s. He’s a low-maintenance guy, obviously super-effective at what he does, but not too flashy, he won’t stand out. But he’s really good at what he does.

Hults, on continuing his education:
I’m a junior, so I’m finishing school, obviously. Only one year left. I’ll probably take some classes in the summer as well and probably keep chipping away at it because I’m pretty close here now. I’m aa big gamer, actually. I play a lot of video games. It kind of just kills a lot of time. Our whole team – it’s kind of a good way for us to catch up and shoot the shop online and stay on touch with each other, too. [Alex Faust: What’s your favorite?] Oh, Call of Duty is the big thing right now. We usually get together every other night and play that. [Tyler Madden: I think I’m right there with him. Call of Duty to pass the time is definitely a big hobby of mine, and just like he said – just to be able to play with guys that I went to school with last year, it’s nice to keep in touch with them. Hobby-wise, I’ve been taking a lot of walks, and also we’ve been a big puzzle family, but I guess you can’t get any more puzzles anywhere, they’re all sold out. We did a couple of those, a couple TV shows we’ve been watching. 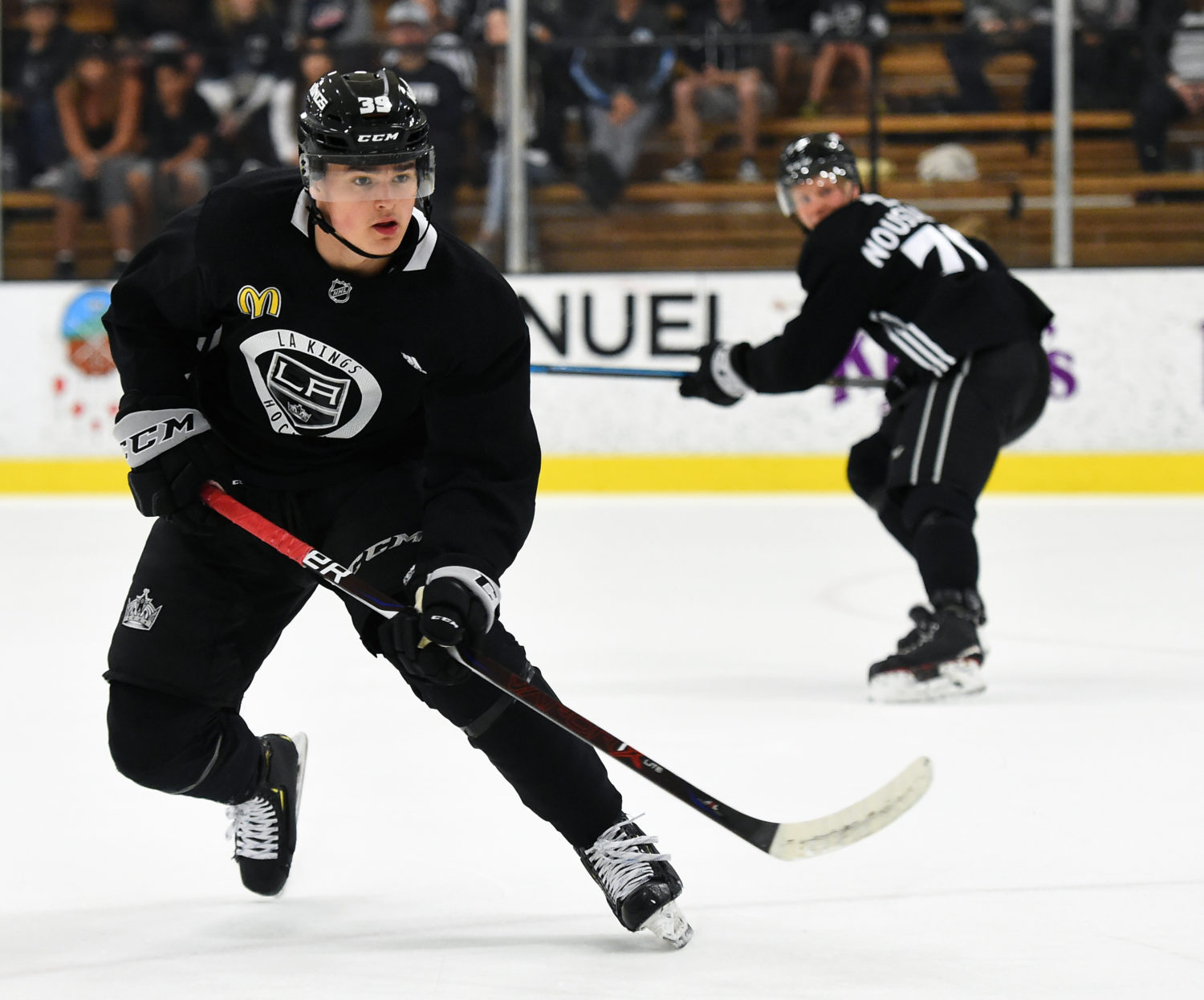