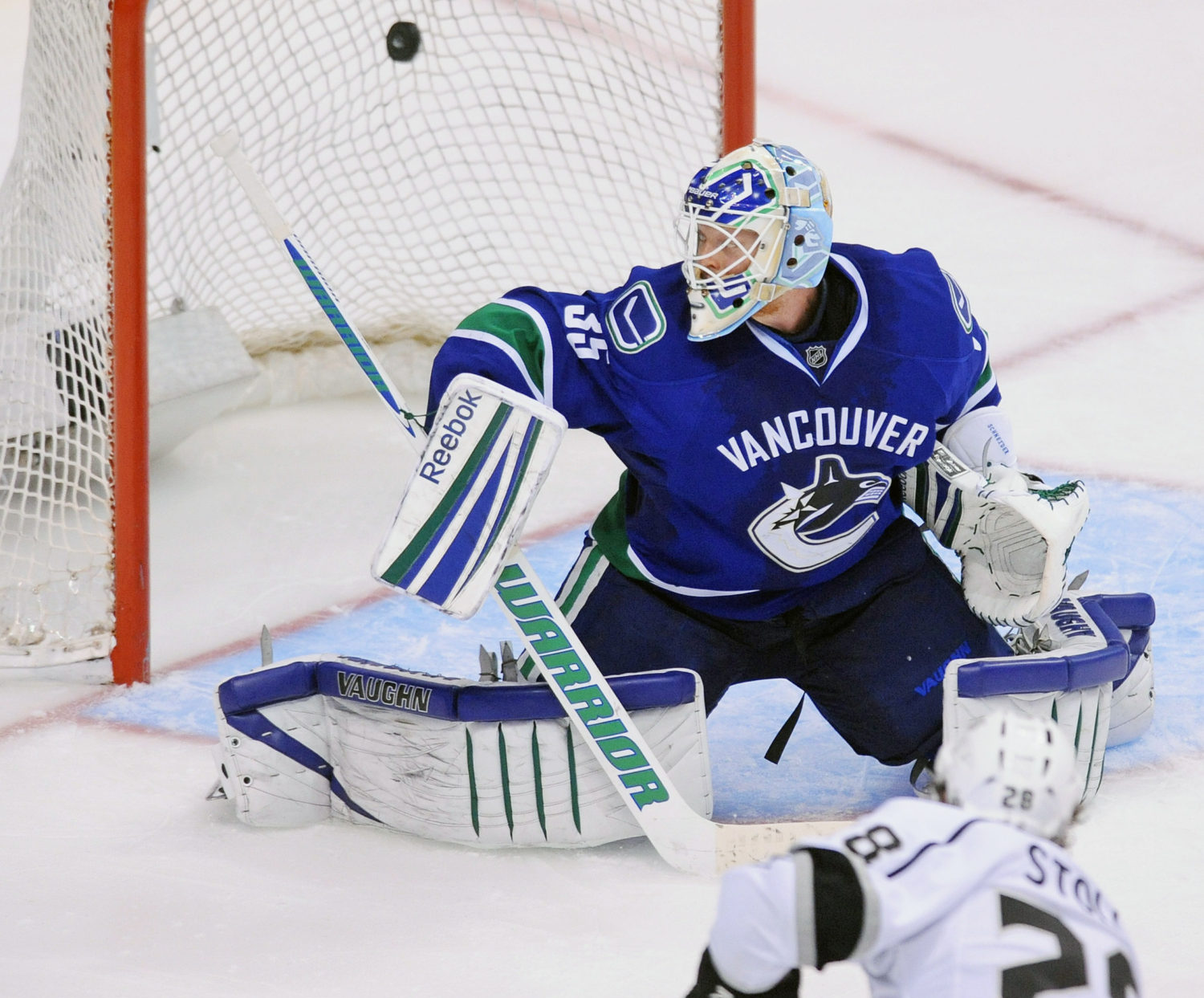 INSIDERS. A fine early afternoon to you. News, notes, links and deep thoughts from LAKI and ORI are below. Lots more to come later today and throughout the week about the Teams For LA fund to benefit the Mayor’s Fund for Los Angeles.

AND BOB MILLER, GET ON MY BACK, BECAUSE I’M GOING TO BE CARRYING YOU OUT OF THIS BOOTH. We’re deep in the spring, where virtually every day is an anniversary of Kings Playoff Series Of Yore. Yesterday it was Detroit, Game 5. Tomorrow will be Detroit, Game 6. Tonight marks eight years since Trevor Lewis forechecked Dan Hamhuis off the puck, freeing it loose for Jarret Stoll’s two-on-one with Dwight King. There was also a Brad Richardson game-tying, third period goal off a tremendous advancement low into the zone by Drew Doughty, one of many unsung contributions by players like King, Colin Fraser and Jordan Nolan that meshed so well with world class talent and a dressing room bursting with team leaders and important voices. Richardson wasn’t only part of the storied 2003 draft class, a pool out of which he’s played the second-most games out of anyone drafted later than the second round. He was also the 10th selection of the 2001 OHL priority selection, the same draft in which Jeff Carter went third to Sault Ste. Marie and Mike Richards fourth to Kitchener. He played three of his four OHL seasons under GM Michael Futa, who joined the Kings as a co-Director of Amateur Scouting in 2006 but was also an advocate for his former player when the team traded a second round draft pick for him in the summer of 2008, eight days before they traded for Stoll and Matt Greene.

That first round series should be in the mix for Closest 4-1 Series In League History. Los Angeles’ game-winning goals were scored at 16:46 of the third period, 8:30 of the third period, 6:30 of the third period and 4:27 of overtime. Of the entire series, they led for just under 49 minutes, Vancouver led for nearly 70, and the series was tied for some excruciating 186 minutes. The Kings were out-attempted at five-on-five play 130-113 in that series, though they held a slight advantage in scoring chances and expected goals. Jonathan Quick was at his Conn Smythe best throughout the series and made an incredible save on a Daniel Sedin breakaway to set the stage for the Game 5 comeback, but Roberto Luongo and Corey Schneider were nearly matching him shot for shot. You were right to scream at the top of your lungs when Stoll’s puck hit twine.

Jarret Stoll, on his goal:
I was seeing a little bit of room up there, and short-side, maybe that’s something that they’re not expecting. I was definitely shooting all the way. Lewie did a great job on the turnover, just forcing their D-man. I was just at the right place at the right time and had a nice little transition 2-on-1.

Dustin Brown, on winning three road games in the series:
I’ve said this for the last couple years. This team, we’re definitely designed better for the playoff hockey, than we are for the regular season. I think, when you have a goalie like Quicker, it always gives you a chance on the road. He made some key saves tonight, a couple breakaway saves for us. I think we did a pretty good job of limiting their grade-A scoring chances, other than a couple chances. We’ve shown that we’ve been able to battle. We’ve been in 2-1 games all season, and it was more of the same.

Jonathan Quick, on stopping Daniel Sedin’s breakaway:
I had to make a few stops there, because Scheids seemed like he kept kicking them (out). He played great in these last three games. I didn’t know if he was going to give one up tonight. He was on it all night. It took a great play by Dewey to push it into overtime. It was huge. It was a huge, huge game.

Darryl Sutter, on Jarret Stoll’s overtime goal:
We’ve been waiting about four months for Jarret Stoll to take that shot. [grins] We’ve used him a lot in the shootouts. Then those guys have struggled a little bit to score in the last little bit, and it’s awesome to see him score.

Henrik Sedin, on why Vancouver lost the series:
My opinion is that you can’t give away two games, like we did, at home to start the series. That’s what we did so good last year. Even though we didn’t play great, we were good enough to be in games and win games. Playing the way we did in the first two, we didn’t play poorly, but in our first game we took way too many penalties. In the second game, our power play was losing us the game. If you give away two games, it’s tough to win four out of five.

MORE ON WEBBY. I hope you learned a little bit more about former Kings coach Tom Webster’s impact on the coaching and scouting community. If you haven’t read my story from last week, it’s right here. There’s one more quote from Paul Maurice I wanted to use but didn’t work in.

“What I watched Tom Webster do was love all parts of the game. He loved to play, he had a great time playing, and then he was a head coach, and he loved that, and he became an assistant coach, a nd he loved that. That’s not easy to do, that transition to go from a head coach to being an assistant coach and then sliding into player development and scouting. Those were almost his strongest suits in the end, because he loved working with a player individually, and he loved trying to help a player. That’s where I thought all things came together for him. We had a fairly young team (in Hartford/Carolina) in the NHL, and then when he went in and he worked with the other teams in player development, that’s where he really, I thought, found a great balance – a love of the game, and a love of people.”

And now its time for the comedy stylings of Reign Insider, Zach Dooley!

In between flying through Ozark on Netflix and preparing for a key off-season for my Madden 20 franchise, let’s catch up on what some of the LA Kings have been up to in the media over the past week or so.

31 Thoughts
Kings Head Coach Todd McLellan was a key focus on the most recent edition of Elliotte Friedman’s 31 Thoughts. We’ve heard some of what McLellan had to say, talking about the hard work and growth of his team over the season, as well as praise and characteristics of some of his players, and how he is pretty off the grid when it comes to social media.

What I found interesting was his thoughts on the different mindsets between players and coaches. McLellan said he still wakes up at 5:30, despite not having a practice to go to…a very coach answer. His sons, the players, chirp him and he says they don’t wake up until 8:30 or 9…a very player (without kids!) answer. The mindset comparison is also interesting, when it comes to how a coach comes to a game thinking about the “we” whereas a player comes to the game thinking about the “me”, the micro/macro comparison.

McLellan said he is still preparing as if the Kings might resume play this season and while he’s held discussions as to the seasons of players with coaches and management, they have not held a version of exit meetings with players, as that could signify an ending.

Those Anderson Boys Are At It Again
Mikey and Joey Anderson joined Jac Collinsworth of NBC Sports for an episode of “Distanced Training” this week. The Andersons, stationed back at home in Minnesota, talked about how they’re keeping with training and keeping hockey in their daily routine the best they can, as well as Mikey’s NHL debut, their graduation from bunk beds and more.

The gem of the interview was how the brothers ruined their sister’s graduation party by getting into a brawl over a game of “Sting Pong”. When Mikey eliminated Joey during the game, allegedly “too hard”, chaos ensued and the brothers wound up wrestling on the ground, with Mikey clocking Joey on the side of the head, drawing blood with a mean right hook.

Inside The Play
Though I wouldn’t mind seeing a virtual edition of this series, the Kings thankfully had a couple of Inside The Play videos pre-recorded with Gabriel Vilardi / Martin Frk, as well as with defenseman Matt Roy, with the latter just released yesterday.

Roy’s is especially interesting, because it focuses on a series of plays, not just one, and in a series of different situations. Fox talks with Roy about his one-on-one defending in space, defending and body positioning in front of the net, open ice hitting and a one-timer goal from the left point. Pretty fitting for the jack of all trades Roy, who seems to get universal praise for his abilities in all situations, while not necessarily standing out in either direction in one area.

Drew Doughty mentioned Roy as his breakout defenseman this season on his conference call with media last week, while Roy’s play drew praise from Todd McLellan as well in the afore-linked 31 Thoughts piece. It was exciting to see Roy bring his two-way game to the Kings this season in the same way that he did in 2018-19 with the Reign, where he was the team’s most consistent defenseman. Good on ya, Partner.

As for the host, Jim Fox, he’s got a special going if you’re in need of some quaran-wine.

Kings goaltender Cal Petersen took over the NHL’s Twitter account last week for a Q&A with fans from across the league. The Kings provided a handy Top-5 of Petersen’s takeover,with the most glaring inclusion being Cal’s approach to eating cereal.