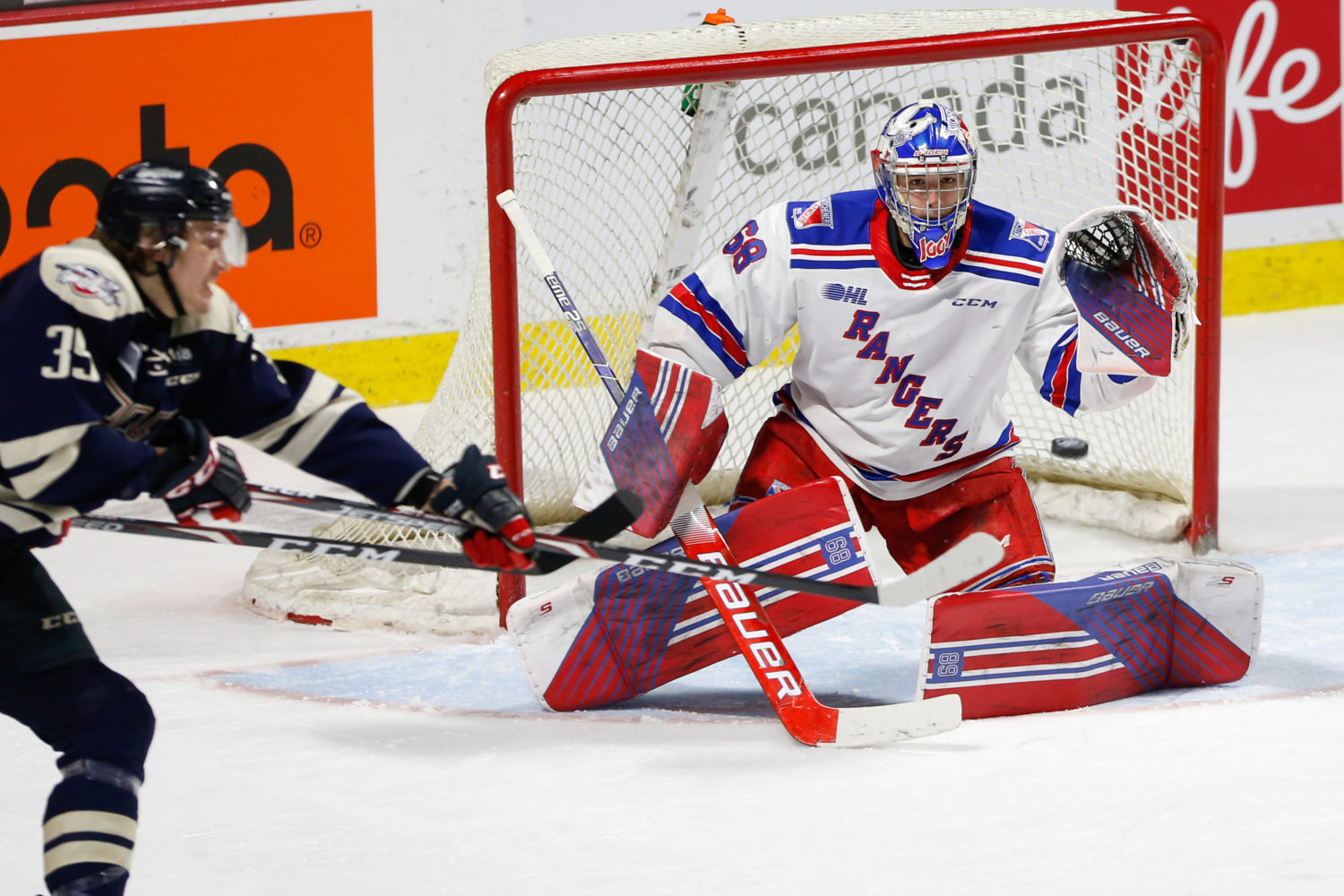 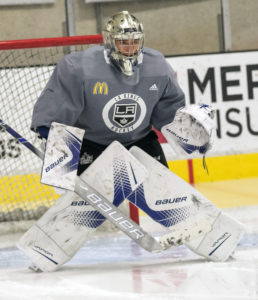 The LA Kings signed goaltender Jacob Ingham to a three-year contract, the club announced Saturday. Ingham, the representative for the Red Tilson Trophy as the Ontario Hockey League’s most outstanding player for a Kitchener team that ended the season 40-16-7, was a sixth-round pick in 2018.

Ingham, a talented young goaltender selected in the second round of the 2016 OHL Priority Selection, built up pro hype during a 16-year-old season with Mississauga in which he posted a sub-three goals against average in 31 games before getting in six solid games of postseason work during the Steelheads’ run to the OHL Final. He hit a sophomore slump behind a less-equipped Mississauga team the following season and dropped from the third to the 13th-ranked North American goalie between NHL Central Scouting’s midterm and final rankings.

Apart from his community involvement – he helped raise funds and awareness for Hockey Gives Blood through his Jake Saves campaign and was named as the recipient of Kitchener’s Ted Scharf Humanitarian Award – Ingham was also recognized by OHL coaches as the Western Conference’s top shootout goalie and the second-best puck handler.

Ingham’s injury timing this past season was unfortunate. He hit his only speed bump of the year immediately before the OHL’s Canada-Russia Super Series games and hadn’t recovered sufficiently to provide a wide enough body of work earn a spot at Canada’s world junior camp. The Rangers won once in a shootout during his seven-game absence; his return sparked an immediate 10-game winning streak.

“Going up there and working with him, just the pride that the community has on that team is incredible,” said Matt Millar, Ontario’s goaltending coach and part of Los Angeles’ goaltending development. He liked Ingham’s ability to seize the opportunity after being traded last off-season to a team with a legacy of winning and high expectations. “Personally for him, just to be able to play and contribute on a team that I think could’ve put together a pretty deep run, if not contended for a Memorial Cup, was incredible, as well.”

Ingham joins Matt Villalta and Cole Kehler in Los Angeles’ goaltending chain beyond Jonathan Quick and Cal Petersen. 2018 fifth rounder David Hrenak at St. Cloud State and 2019 third rounder Lukas Parik at WHL-Spokane have not signed contracts. As a player who turns 20 on June 10, Ingham will be eligible to play at AHL-Ontario or return to the OHL for his overage season in 2020-21. Because he was drafted out of the CHL, Los Angeles would not have retained Ingham’s rights had they failed to sign him by June 1. No other 2018 L.A. pick faces a June 1 deadline.

It is not easy for an 18-year-old to acquit themselves in a pre-season rookie tournament game, what, with certain teams dotting their rosters with NHL experience. But Ingham showed well at both the Vegas and Irvine tournaments, more so than would the typical teenage-unsigned-late-round-junior-goalie during his first and second camps. But what do I know? I’m just a simple blogger. Let’s hear from Millar and Director of Amateur Scouting Mark Yannetti, whose observations are below.

A great cause and a splendid effort by an impressive young man who also happens to be a fine @LAKings goaltending prospect: @hkygivesblood #6ive8lood https://t.co/Te6qoxNMCa

Matt Millar, on Jacob Ingham’s skill set:
He’s athletic. Off the ice, if you’d talk to Matt Price, he puts up really good numbers in the weight room as far as power generation and athletic agility, quickness, things like that, and I think that directly translates on-ice. Some of the reasons he was drafted were due to his size and his athletic ability, and this season he worked through development camps with Bill and I, and we had great communication with their goalie coach, Kain Tisi, just really hammering home a lot of the technical anchors in his game that give him more consistency on a shot-by-shot basis. I think he’s capable of making the big saves. I think getting him to make just the routine saves, keeping them routine and keeping them simple was the challenge, and I think he accepted that and accomplished that this year. Getting out and moving the puck is something he enjoys doing. He’s very skilled at handling the puck and passing the puck, and he has good hockey sense and it’s getting better, and that’s really allowing him to make effective passes. He’s reading the opposition’s forecheck, knowing where his defenseman is supported, and being able to make a quick, firm pass so the team can exit the zone are all areas he’s really refining that are going to continue to get better as he’s a pro.

Millar, on how such raised scoring rates in the OHL affect a goalie’s development and evaluation:
Yeah, the OHL is a tough league, it’s pretty wide open, and I think a lot of it, when you’re playing against teams like London and Guelph, Ottawa, that have first round draft picks and really good young players that are maybe going in the later rounds, the skill and the talent level is very high. So, there’s a ton of offense generated just by the talent in the league, and I think that’s great for a guy like Jacob, because he’s going to see a lot of opportunities, whether it’s breakaways or odd-man rushes or zone pressures, things that he might not see as frequently as you become a pro because the players get better and the structure gets a little bit better. I think for him, just finding out how he wanted to play in some of those really tough situation with a good mix of athleticism and structure, I think that really helped him to define his style moving forward, and I think he found a lot of things through just playing at a high level in Kitchener that he’s going to be able to take with him in pro hockey.

Mark Yannetti, on Ingham responding well from an injury (from 12/5/19):
Billy (Ranford) and Dusty (Imoo) and now Matt, I think they’ve had a profound effect on him mentally. Jacob’s always had the physical tools – size, athleticism – but last year at rookie camp, his demeanor was different, the way he attacked the puck, the authority he played with. There was a change in his demeanor, there was a change in the mental aspect of the game, and it really carried through to this year in his game. I think he was putting himself in a position to have an outside chance at [being named to Canada’s World Juniors camp], but it’s the mental approach that they’ve really done a good job with. He’s much more focused, and it shows in his play. He needed to get healthy.

The LA Kings have signed goaltender Jacob Ingham to a three-year entry-level contract, according to Vice President and General Manager Rob Blake.

The 6-4, 195-pound goaltender spent the 2019-20 season with the Kitchener Rangers of the Ontario Hockey League, where he posted a 33-8-4 (W-L-OTL) record, 2.96 goals-against-average, .917 save percentage and two shutouts in 46 appearances. His 33 wins led the OHL, making him the first Rangers netminder to lead the league in wins since 2002-03, while his .917 save percentage ranked third and his 2.96 goals-against-average ranked fifth among starting goaltenders.

For his efforts, Ingham was tabbed the Rangers’ 2019-20 nominee for the OHL’s Red Tilson Trophy, which recognizes the league’s Most Outstanding Player. The Barrie, Ontario native also earned OHL Goaltender of the Month honors for December 2019 and received the 2019-20 Ted Scharf Humanitarian Award from his team for outstanding community service.

Prior to joining the Rangers in June 2019, Ingham spent three seasons (2016-19) with the Mississauga Steelheads. In 177 career OHL regular-season appearances, Ingham registered a 93-61-9 record, 3.23 goals-against-average, .899 save percentage and five shutouts. He also appeared in 15 career playoff games with Mississauga, posting a 6-7-2 record, 3.40 goal-against-average and .877 save percentage.

Ingham was originally drafted by the Kings in the sixth round (175th overall) of the 2018 NHL Draft.

I am honoured to have signed my first NHL contract with @LAKings . It has been an amazing journey to get to this point in my career. I am so thankful to everyone that has played a role in helping me become the player I am today. pic.twitter.com/6qrqXFfrsb