As expected, left-shot defenseman Cole Hults will forego his senior season at Penn State after signing a two-year entry-level contract with the LA Kings. Hults, a veteran of 111 NCAA games who turns 22 next month, led Nittany Lions defensemen in goals, assists and points (8-22=30) and played a versatile role for a team with an up-tempo, shot-minded bent. He’s ticketed for Ontario to start his pro career.

By signing the player selected in the fifth round, 134th overall, in 2017, the LA Kings have now signed all seven players from the 2017 NHL Draft, Rob Blake’s first as general manager. Hults joins Gabriel Vilardi, Jaret Anderson-Dolan, Matt Villalta, Mikey Anderson, Markus Phillips and Drake Rymsha as 2017 draftees who’ve turned pro with the Kings. The prospect pool was exhausted as the Kings sputtered out of contention late last decade, and there’s probably one player in that group who might not have been offered a contract had the club been as bursting through the seams with young talent as it is today. But that’s still a remarkable haul, regardless of the circumstances.

This was also as expected; LA Kings Insider first learned from Rob Blake about the team’s intent to sign Cole Hults during an eventful morning in Calgary late in the 2018-19 season. Drew Doughty had things to say about Matthew Tkachuk and Ilya Kovalchuk surprised a good number of us by not traveling, so stick taps to Hoover and Patrick and our broadcast crew for working some important NCAA prospect talk into our show that night. I am unaware of any hang-ups from then on. Blake also shared the team’s intent to sign Hults at the most recent State of the Franchise, leading to the inevitable ink-on-paper.

There are already good LAKI archives on Hults, a versatile but firm defenseman who moves and shoots pucks well and could potentially grow into a second-team special teams role. Penn State’s schematics skew dramatically towards shot volume, and Hults, who has a heavy shot, was among the boats to be floated by the program’s generally high offensive tide. And that’s not to take anything away from his play without the puck. Even as a 19-year-old freshman, he was earning important minutes right off the bat on an NCAA tournament team and though an early injury off-set some of his freshman year trajectory, he was productive very quickly on a good Penn State team, particularly on the power play. I’ve seen a good deal of Hults, but college hockey analyst and NHL scout Dave Starman has seen much, much more of him.

Reported on @FoxSportsWest / LAKI last March that an LAK ELC will follow his junior season at PSU. More to come on him and Turcotte today. https://t.co/j7Vow3FJUh

This was during a conversation between Starman and play-by-play man Dan Kelly on Hults’ “low-risk, high-reward” package, a skill set Penn State coaches had compared to Alec Martinez’s. If you have old games collecting dust in the DVR or a BTN2Go subscription, check out his early-season home series against Wisconsin, a team he traditionally plays well against. There’s a lot of Hults praise.

His 2019-20 season opened with the first defensive hat trick in the history of the Penn State program and concluded, like so many others, with an ellipsis rather than any sort of postseason punctuation. He finished with eight goals and 30 points in 34 games and used a +23 rating to finish at a +48 in his collegiate career.

Los Angeles was also involved in several NCAA free agents, including a fight for puck-moving 5-foot-8 defenseman Jack Ahcan of St. Cloud, a former development camp invitee who signed with Boston, and Michigan State redshirt senior Jerad Rosburg, a competitive, bruising defenseman whose father Jerry Rosburg spent 40 years coaching football and was a Super Bowl-winning special teams coordinator and associate head coach with the Baltimore Ravens. He signed with Dallas. Keep an eye on the Kings’ pursuit of those physical, strongmen types. The organizational thrust is towards speed, skill and offense, but don’t overlook their value on competitiveness; I’ve heard they’re also looking to add an additional physical punch to their deep prospect pool on the back end.

Cole Hults, on the message from the development staff, 6/28/19:
This year it’s just ‘be a pro.’ Just kind of handle yourself like that on and off the ice with what you eat, how you treat your body. And that conference call at the end of the year, that was really good with Rob Blake and a couple other guys from the development staff, and the first thing Rob said was ‘be a pro this year’ and learn how to do that before I hopefully get my opportunity next year. I think that was the most important thing I took from him, and when I head to the rink, I think this year I’m going to try and stress this is a good year to come in and be a leader. I know I’ll be a junior this year and I know you’ve got a couple of big guys coming in, but this year I think I can do something special, so I’m excited to go back as well.

Hults, on whether he was close to signing last off-season:
I don’t know. Maybe, I don’t know, it was kind of up in the air. I had a conversation with my advisor and obviously I want a deal, but I wasn’t forcing it or anything, and whatever they say I’m going to follow. Obviously, they’ve got a path for me and I’m just going to follow it and control what I can control and go from there.

Hults, on the role for defensemen in Penn State’s aggressive, shot-heavy system:
It makes it easy for us I think. We’re playing simply off instinct, right? Our forwards are so good. They’re all such fast guys, so we know exactly how we play and we know exactly what we need to do, so for us, we don’t even have to think from the back-end standpoint, which makes it really easy for us and is why we’re having a lot of success. I think we’ve got a simple back end. We’re not too flashy and we let our forwards kind of do the offensive, but we throw pucks from the point and we’re not too fancy from up there, too. So, it makes it really easy on us I’d say.

Senior Advisor to the General Manager/Development Mike O’Connell, on Cole Hults’ responsibilities, 11/2/19:
He played a lot tonight. Played second power play, didn’t kill any penalties, but he gets the puck, he moves it to the right person at the right time at the right speed. He’s come a long way with that. And his defensive game was great – he’s very strong on his feet. He had a good game. Really settled the team down.

O’Connell, on Penn State coaches comparing Hults to Alec Martinez:
I think he’s different than Alec. Alec at this stage, he was just a little bit more of a dynamic player, speed-wise. Hults is more of, I would say, he’s not as quick, but his positioning is excellent, and he sees the ice beautifully. He makes the right play. Not as dynamic as Alec was at this stage, but as effective.

Amateur Scout – Quebec/Maritimes Tony Gasparini, on Hults’ fast start in college hockey, 11/14/17:
He’s making the transition in regards to his play away from the puck, becoming more assertive without it, closing gaps, finishing off physically with intent. He’s in a great development situation. He’s playing top pairing minutes right from the start, and he’s on both of their special teams units. He’s a young man that he’s going to have a bright future ahead of him as long as he keeps working, and that’s something that he dedicated himself to the last two summers.

The LA Kings have signed defenseman Cole Hults to a two-year entry-level contract, according to Vice President and General Manager Rob Blake.

Hults, a 6-2, 195-pound native of Stoughton, Wis., recently completed his junior season at Penn State University (NCAA). In 34 games this season, he registered a career-high in goals (8) and points (30) while tying his career-best in assists (22). He ranked 10th in the nation in points among defensemen and led Nittany Lion blueliners in all categories.

Originally a fifth-round selection (134th overall) of the Kings in the 2017 NHL Draft, Hults amassed 78 points (17-61=78) and a plus-48 rating over 111 games with the Nittany Lions. Among defensemen, the 21-year-old leaves the program as the all-time leader in goals, assists and points, and tied for fifth in games played. He helped lead Penn State to the 2020 Big Ten regular-season championship and the program’s first two NCAA tournament bids in 2017 and 2018. 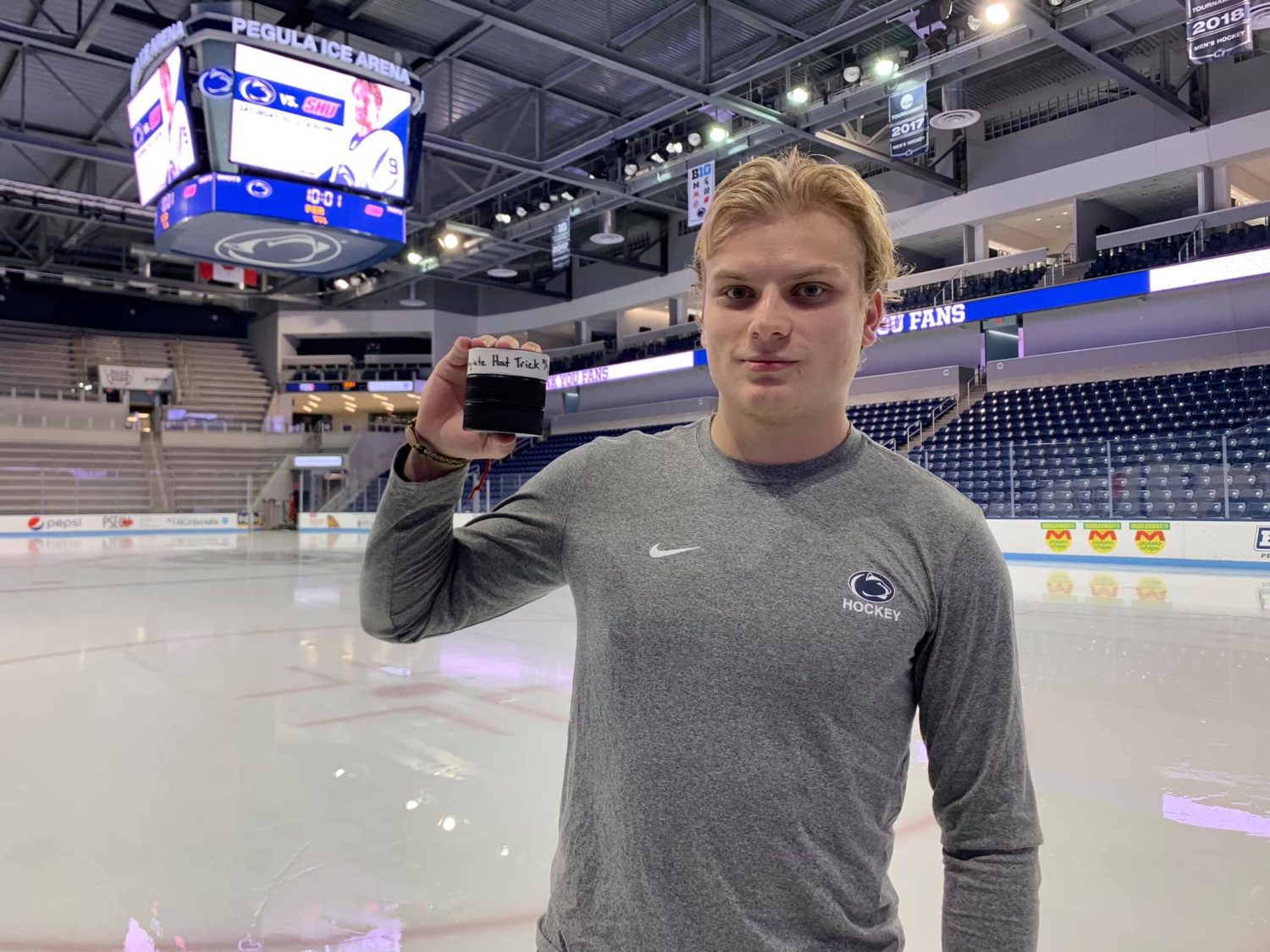