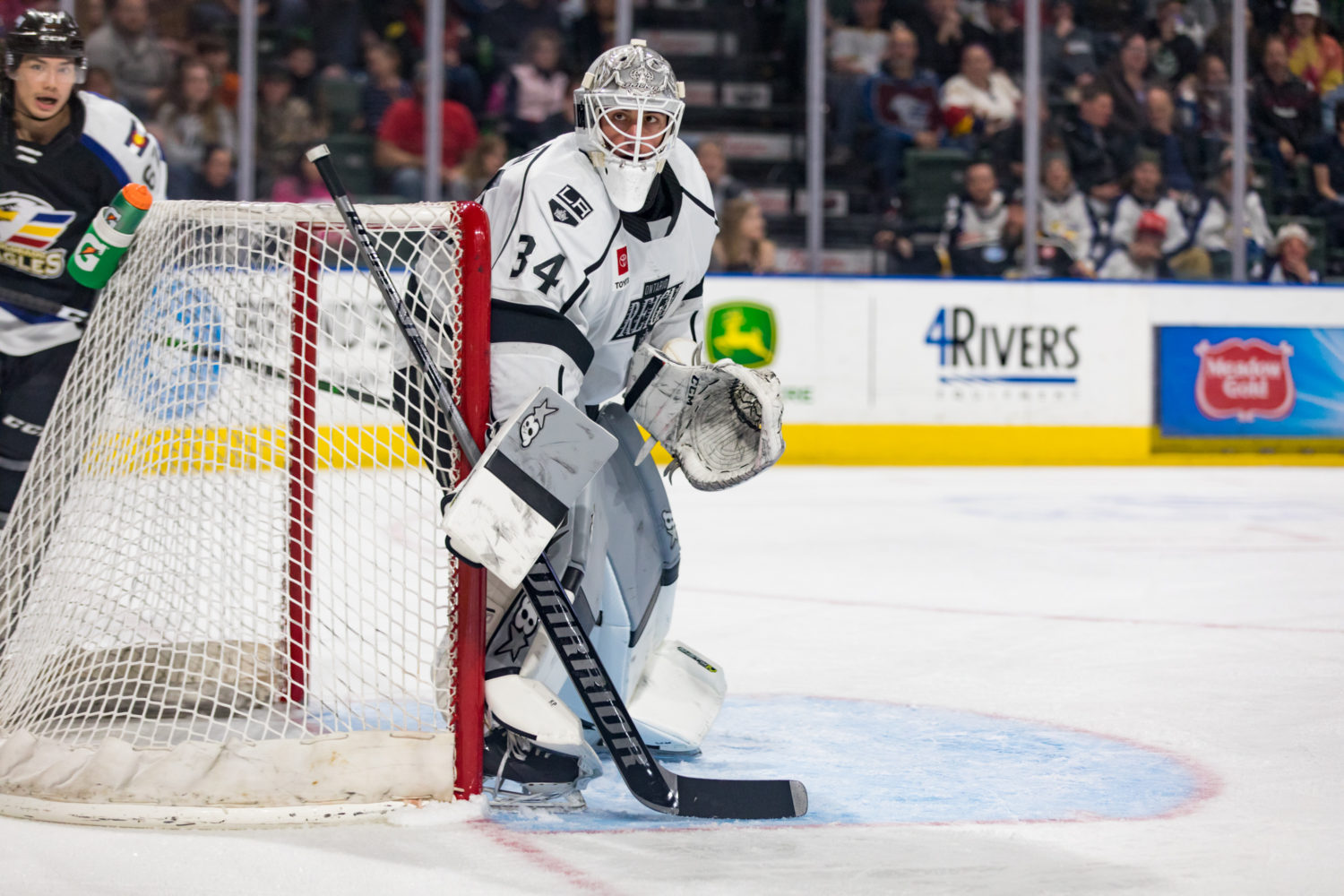 The Ontario Reign were unable to bounce back from yesterday’s defeat, as they fell again in Colorado, tonight by a 3-0 final margin. The Reign threw 34 pucks at Eagles netminder Hunter Miska, but were unable to get one past him, as Ontario had most of its opportunities from outside the high-danger areas on the ice.

The Reign conceded just 50 seconds into the game, as Colorado defenseman Mark Alt crashed the net from the point and buried a feed from forward T.J. Tynan, who had assists on all three goals for the hosts. Ontario seemed to calm down from there and goaltender Kevin Poulin played strong, as he stopped the final 11 shots in the opening period thrown his way.

Ontario got into some penalty trouble early in the second, and Colorado capitalized twice in the first five minutes with a pair of power-play goals. Jacob MacDonald and A.J. Greer each scored for the Eagles, with Tynan collecting an assist on both markers. The Reign got some looks later in the second, with Boko Imama and Kale Clague each hitting a post, but couldn’t get one to go. It felt like, although the Reign were not abnormally low in shots on goal, most of their looks came from low danger areas on the ice. Ontario had two more shots on goal in the third, with a 14-12 margin, but Miska collected his second shutout of the season with 35 saves in total.

The Reign are off from midweek games this week, and are back in action one week from today, with a pair of home tilts at Toyota Arena beginning on Saturday evening against San Jose.

Jaret Anderson-Dolan on the power play not converting this weekend
It was just execution for all the units. A lot of passes into feet, just not being in the right spots. We had a lot of good looks, but we’ve just got to find a way to get it done and we haven’t in the past couple. We’ve got to turn it around.

On if special teams could have been a difference this weekend with better execution
Yeah, absolutely. We score a couple of power-play goals and shut theirs down, eliminate those two goals in the second there and obviously it’s a completely different hockey game. It just wasn’t good enough, both special teams in both games. Like I said, turn that around and we’ll be good.

On lots of shots from the outside, and not getting to rebounds for second and third looks
I felt like [we were] just a half step off. Their d-men were collapsing pretty good and boxing out, but we’ve got to find a way to get there and bear down in front of the net because there were a lot of pucks just sitting around there. Again, a couple of those go in and it’s two completely different hockey games in my opinion.

On 8-of-11 to close the year at home, and the importance of winning at home
It’s going to be huge. Every game is a playoff game from this point on, it’s been that way for a few games now. At home, it’s a big advantage, to take advantage of our matchups and the home crowd. We can take the lessons from this one and put it behind us and focus on what we can control now.

Mike Stothers on what was lacking tonight in the offensive end
What was lacking? Penetration into the hard areas. Perimeter play, far too much. Power play, no finish both games. The Three “P’s” equals zero [points].

On five penalties to kill in the third and getting in their own way down the stretch
We took four penalties in the third period compared to their two. You must be counting Clague’s penalty at the end of the second period to make it five? In any event they didn’t score on any of those penalties but more importantly we didn’t score on the penalties they took early in the third including us having a 4-on-3 power play. We can analyze this all night long, the bottom line is we scored one goal in two games, and were nowhere near good enough to beat that team. We will get back to work next week.

On Kevin Poulin battling tonight, and if his effort is one positive to be taken from tonight’s game
Poulin played well, and did indeed battle hard. He is a veteran guy that knows how to prepare, but there are plenty of positives to draw from. We are still playing, and are still in the playoff hunt. We are returning home with a group of guys that are disappointed in the outcome this weekend, but determined to be better.