Andersen to start vs Kings; Doughty dishes on his ex-teammates 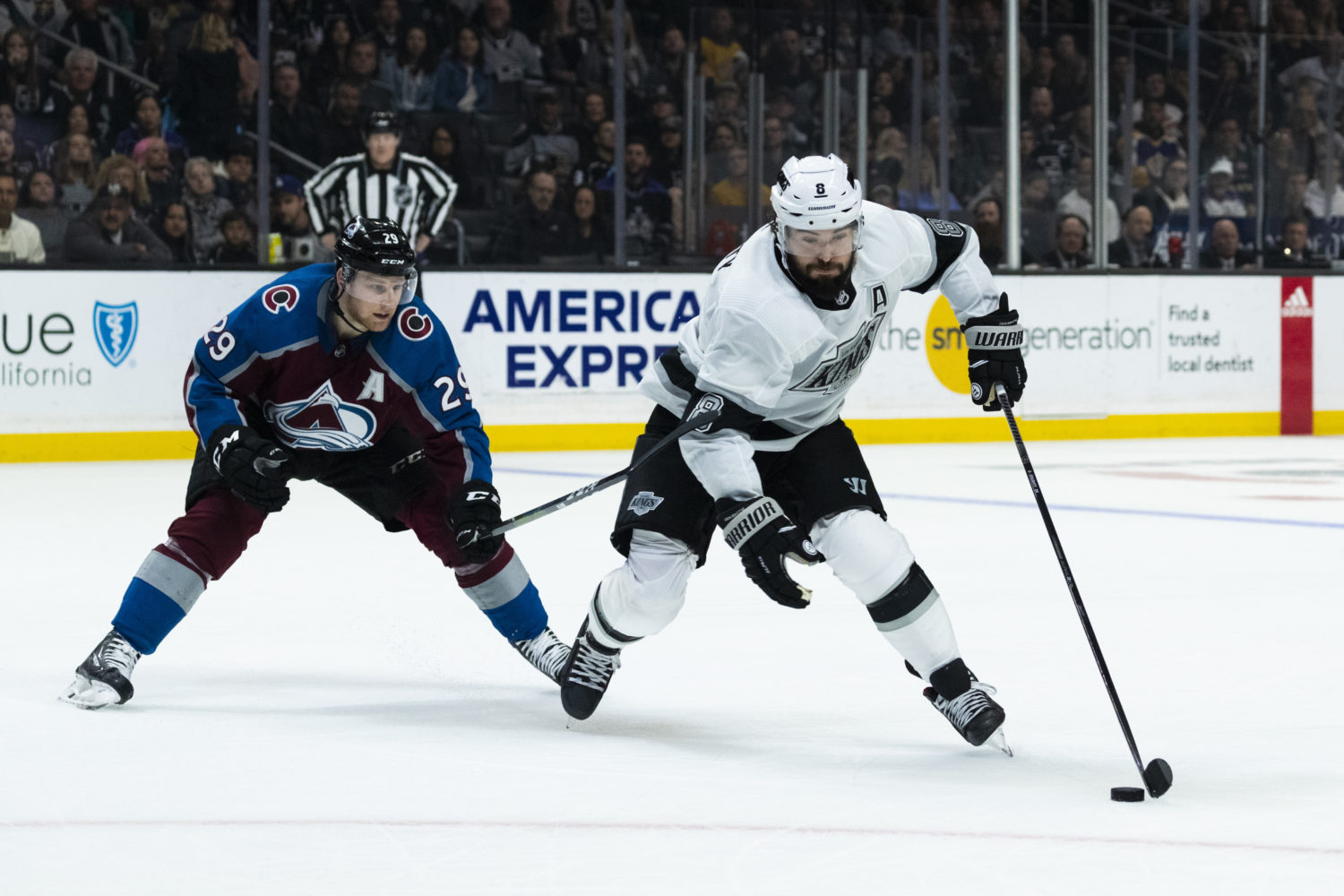 Insiders! A good afternoon to you. Thanks for your patience both Kings and Maple Leafs quotes were gathered. More to come from Todd McLellan, Jake Muzzin, Kyle Clifford and Jack Campbell.

Drew Doughty will be relieved to know that Muzzin is, in fact, on the Maple Leafs’ trip. (Sorry for the lousy info Sunday night, Drew – hopefully you guys didn’t cancel your dinner plans.)

Muzzin won’t play on the trip because of a broken knuckle sustained blocking a shot last week, but he’s with the team and took the ice briefly for a light skate after Toronto’s practice, and his presence will be of assistance to a team with pretty good playoff footing but just 7-7-1 in their last 14 and coming off a 5-2 loss in San Jose Tuesday night.

Campbell isn’t scheduled to play Thursday, either. Coach Sheldon Keefe confirmed Wednesday that Frederik Anderson – 8-1-2 in his career against los Angeles with a 2.21 goals-against average and a .930 save percentage – will draw the nod at Staples Center, which means the Kings will face the ex-Duck and the Ducks, presumably, will face the ex-King.

“The biggest thought process for us, first of all, was we wanted to get Jack in two out of three games this week. That was the first thing, so that to me trumps anything in terms of him playing against his former team or anything like that,” Keefe said. “And, also, Fred’s our starting goaltender, and it just makes sense for him coming off [last night’s loss]. He didn’t play last night, he gets a full practice today, and he comes on and plays a game rather than having him play on our back-to-back.”

So! Kyle Clifford is the lone ex-King scheduled to play Thursday. There will be a first period tribute video honoring all three. More to come on the alums.

Drew Doughty, on how badly he wants to win on Thursday:
Nothing extra. Just want to beat them, obviously, especially now that those three guys are on that team, I want to beat them even more. Having bragging rights over the summer and whatnot – yeah, looking for another win.

Doughty, on getting tangled up with Kyle Clifford:
I know what he’s all about. I’ve played with him for so long. I know what he’s going to do out there, so I think we’re just going to have fun with it. Obviously, you see him as a big, tough guy, a guy that’s going to rock other guys, so I’ll try to hit him.

Doughty, on Jack Campbell’s positivity:
He’s like over-the-top positive and over-the-top doing things for people. He’s a great guy and we miss having those three guys around on our team. They’re great people off the ice and great teammates. We had Jack – Jack will do anything for anyone. It almost gets to the point that you’re going up to him, like, “hey, just stop doing [stuff].”

Doughty, on some of his favorite Campbell stories:
Yeah, I had an afterparty at my house one time, so he came over. The next morning, he was like, ‘Dewey, thank you so much for having me over at the house,’ and he bought me a Gucci tie just because I had the afterparty. So, a Gucci tie, I don’t know how much they cost, but pretty expensive. So, yeah, just for having him over for a few beers after the bar, he got me a Gucci tie.

Doughty, on what he misses about Jake Muzzin:
Going golfing with him, playing cards with him, he was a great guy to have in the room and he was one of my better buddies on the team when he was here, and obviously we grew up playing against each other. Over the summer and stuff like that we were always golfing and having fun together, our wives got along together well. I just miss everything about having him here, really.

Doughty, on the pride in Muzzin becoming a team leader in Toronto:
Yeah, when he was here, he helped me a ton in the room. When he got traded, we lost a little bit in the room there. He’s very good at analyzing the game, seeing things that we need to do differently period-by-period to try to get better, and he was a good motivator to help the young guys, a good role model. Always up in the gym, working on his craft. I know from what I’ve heard, he’s one of the bigger voices obviously in the Leafs’ locker room, so they’re going to miss him, for sure.

Doughty, on the importance of Muzzin’s bluntness:
It’s important. Me and Muzz, we grew up together a little younger here in the LA Kings organization. We watched two guys in Jarret Stoll and Matt Greene do it for years, and we learned a lot from them. After they were gone, me and him tried to emulate the things they were doing, and we kind of took it forward, but Muzz ain’t going to talk to the media or anything like that – he stays to himself. You guys won’t realize how much he means to the team unless you’re in the room.

Doughty, on Los Angeles’ 6-2-1 stretch:
Honestly, yeah, we’re whatever the record you just said was, but the goalies stood on their head for probably three or four of them. Especially like last game, yeah, we won three or four-one, but it could’ve been a tied game going into overtime if not them having the lead. So, I don’t think we’re necessarily doing too much different, but we’re playing the system better. But our goaltending has been really good in this stretch.

Doughty, on any sense the team is “turning the corner”:
I mean, yeah, because we’ve got a lot of picks, I guess. Happy to see all that – we’ve got some prospects. I mean, I guess a little bit, but we’ve had flashes of skating better and then we go into a hole and get worse for a little bit, so we need to stay consistent with it and keep running with it.

Doughty, on how long it took before the Kings were playing improved hockey under Darryl Sutter:
Pretty early. Darryl was pretty adamant on what the wanted right off the bat, and it was just we had the same coach for three years before that, and it was just nice to have a new face in there. He was much different than our previous coach. He was more of a motivator and stuff like that rather than a numbers-and-positional guy, and that’s what we needed at that time – we needed a kick in the but and he gave us it. So, kind of right when we got Darryl, you could see things changing right away.