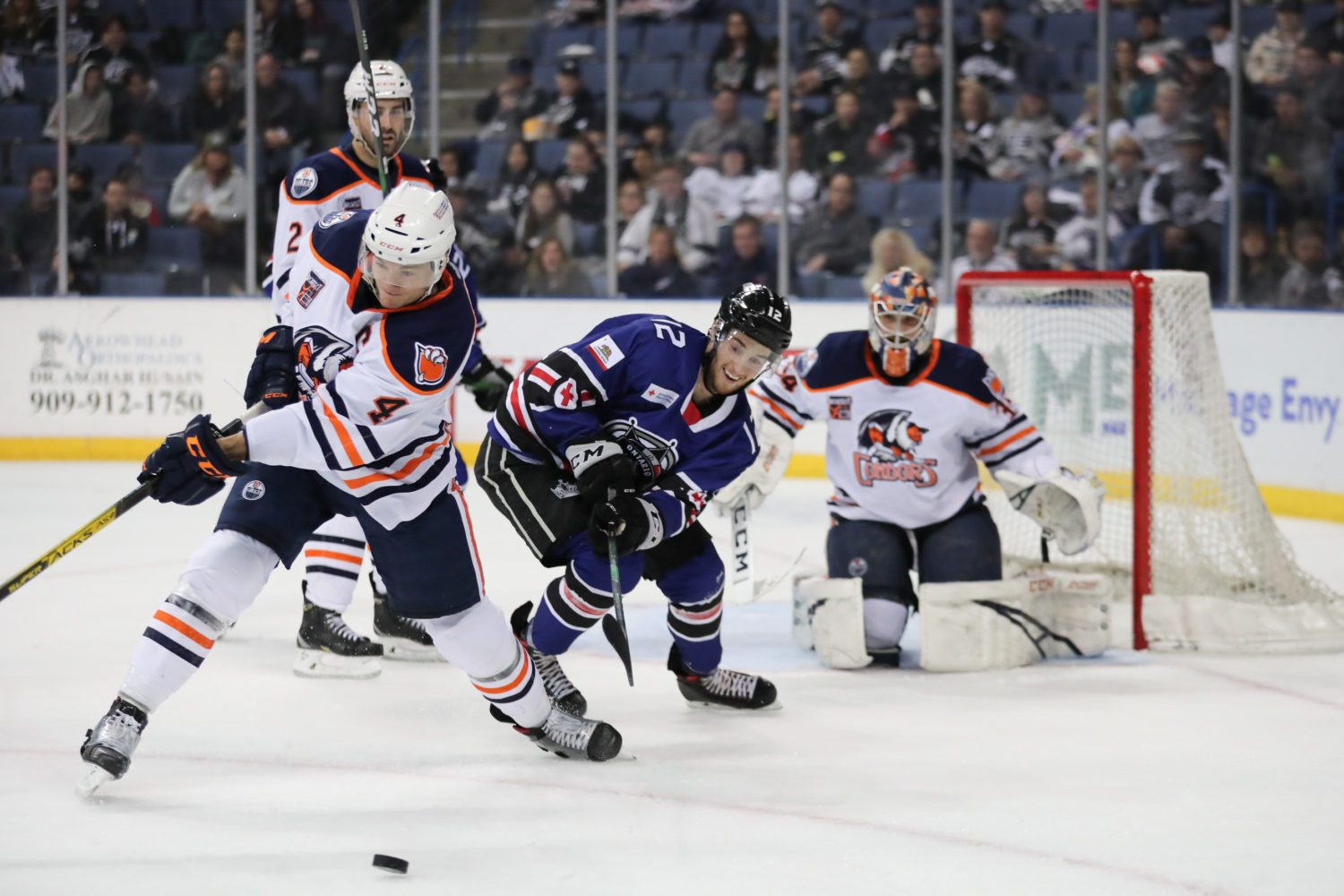 Some how, some way, the Ontario Reign continue to find a way to win hockey games. It’s never the same way with this team. Last night, it was a franchise-best eight goals at home in an 8-4 win over Tucson. Wednesday’s win in San Jose was carried by the Reign’s special teams units and goaltending, in a 4-2 win over San Jose. And tonight, in front of a massive crowd at Toyota Arena, the Reign used a flair for the dramatic to force overtime and later win in the shootout in a 2-1 win over Bakersfield.

Much of this game was played at 0-0 or 1-0 Bakersfield. After a scoreless first period, the Condors opened the scoring 6:34 into the middle stanza, the scoreline that would hold for much of the evening. Until, however, the clock ticked past the three minutes remaining mark in regulation and the Reign found their way onto the scoreboard. A Jaret Anderson-Dolan shot was kicked aside by Bakersfield netminder Stuart Skinner, but no further than Blaine Byron, who lofted a backhanded effort into the net, sparking a raucous celebration by players and fans alike.

The Reign survived a late penalty, that extended 60 seconds into overtime, and were unable to score on a late overtime PP of their own, before both Matt Luff and Mikey Eyssimont scored in the shootout, while Matthew Villalta stopped both Condors shots thrown his way, including a highlight-reel stop on forward Luke Esposito.

With the victory, Ontario is now tied for third in the Pacific Division with the Colorado Eagles, though the Reign cede four games in hand to their rivals from Loveland. Ontario surged past San Diego and into that spot, just hours after the Gulls themselves skated to a 4-3 overtime win in San Jose, claiming the fourth seed for a portion of today.

Matthew Villalta on his first career shootout in the AHL
First of all, I think it was really exciting, first professional shootout I’ve ever been in and I think it was a real good experience for me. It was a lot of fun, the fans were really into it and all the guys were fired up and they were making me feel good about myself before I went in net, especially Boko saying it’s my show. He’s a great teammate and really fires up the guys when we need it.

On his second shootout save, with the paddle
On the breakaway, he made a good move. He just kind of juked me out a little bit and I got flatfooted and he went to the blocker side, like I said good move. I was kind of falling backwards and last resort stick the paddle out, stick something out there and luckily I made the save.

On the character in the room that’s allowed this team to consistently come back in games
I think it’s a common theme with us, for a lot of games, and I think it starts with our leadership group. We’ve got a really good leadership group, all the older guys, they’re really showing us young guys how to take care of your body and how to come to perform on the back end of a long stretch of games. They’ve been doing great, and I feel like the young guys have been doing great, stepping up as well too. Toby, JAD, Johan with a big block tonight in the third and all those guys. I think that’s huge, and everyone’s just pulling on the same rope right now.

On how he approaches the back half of a back-to-back, when he didn’t play the night before
I think it’s just business as usual, just go in there and have fun. The boys are going to come to battle for you every night and tonight they did. I think that first goal in the second period, five-hole, that’s on me, I even told the boys that in the room. Elite goalies, they make every save they can and I wasn’t happy with myself on that. I just told myself I’m not going to let in another goal in this game and the boys got a big goal there late in the third, Bysey had a nice rebound and went hard to the net. Then, [in the shootout], Luffer with a nice breakaway move and Mikey ripping it five-hole, it was awesome.

Mike Stothers on Villalta’s calmness in the shootout, and his performance tonight
I thought Matty was outstanding again. You look at it and it’s a one-goal game until very, very late. We tied it up and then we get into overtime, they’ve got a power play going into it, we get a power play, it’s exciting stuff. You get into a shootout and he’s got to face that stuff sooner or later. He just handled it like he handles everything, he just takes it one shot at a time. Right now, nothing seems to really faze him. I said the same thing I say to all the goalies when we go into a shootout, do you want us to shoot first or them to shoot first. His response is the same as every other goalie I’ve ever had, I don’t care, what do you want to do? So, they answer my question with a question, which doesn’t really help. So, anyway, he got to watch us go first and then, you know what, he did a great job like he’s done for us all season.

On Blaine Byron’s “quiet” but efficient offensive production
He’s a pretty versatile guy, he can play on any line and make that line better. I don’t know what happened to him in Springfield, I don’t know if they had a numbers game and he was kind of lost in the shuffle, but since he’s come here, he’s fit in with whatever centerman we’ve put him with and he comes up with some timely plays. I think he’s just a guy that’s just trying to make a name for himself, and make a statement, without it being flashy or overt. He just, as you said, he goes about things quietly, he’s got a quiet personality and he’s just an efficient guy who works hard every day and he keeps getting better.

On the message to the team in the third period on how to find a goal and tie the game
The approach was, going into the third, that it’s a one-goal game and that one goal we knew wasn’t going to beat us. No way. All we had to do was get one to tie it up and that’s the approach we took. There’s a lot at stake for our guys right now, and I think the best part of this is tonight’s game was an excellent hockey game. Tonight’s game was a playoff game, and we’ve been playing playoff hockey for quite awhile now, just trying to get in there and we still have no guarantees. This is a good learning process for our guys and if we’re fortunate enough to get in, which we’re certainly doing everything we can to get in there, that’s the way the game’s going to be played. Why not learn it now?

On pride in his team meeting the challenges as of late, but perhaps exceeded it
We’ve been consistent, but so has San Diego, so it seems like everybody else is as well. That just goes to show how much parody there is in our division and how important each game is. You really can’t afford to be flat on any given night, even the teams like San Jose and Bakersfield, although their maybe total points in the standings don’t reflect just how good of hockey teams they are, they’re playing really good hockey and they’re tough teams to beat. There’s going to be nothing easy, this is going to go right down to the wire and I’m proud of the guys for sticking with it and believing that they can do it. They sincerely believe that they can do it.