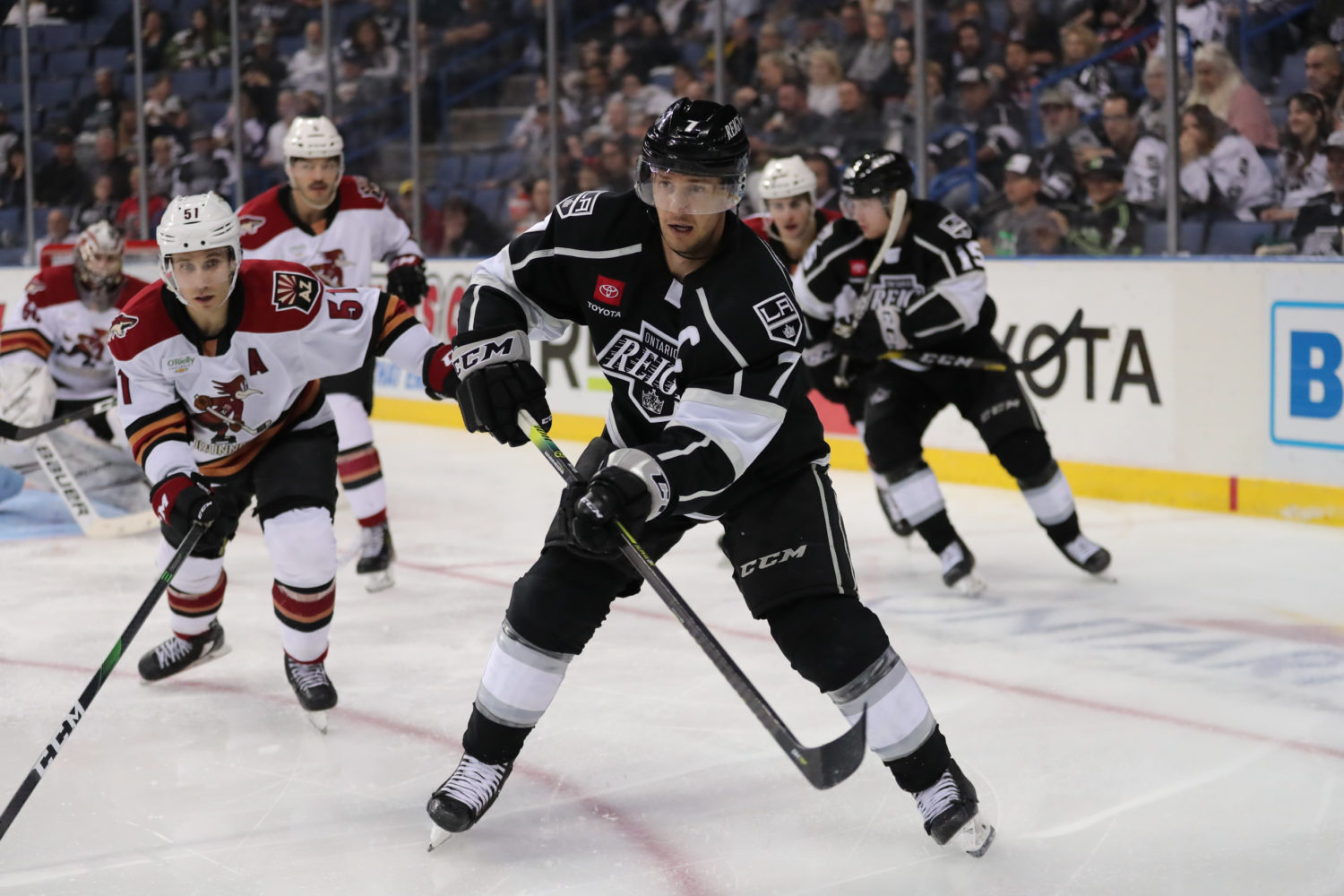 It took until Game 8 of 8, but the Ontario Reign finally got the best of the Tucson Roadrunners, and in statement fashion too, as they skated to an 8-4 victory on Friday evening at Toyota Arena.

Ontario was led by a hat trick from its captain, Brett Sutter, who had the first Reign three-goal effort of the season, and their first overall since Sutter’s hat trick in March of last season against San Diego. Sutter’s line with Carl Grundstrom and Sheldon Rempal was responsible for four of eight goals, with all three finishing +3 or better on the evening. From the blueline, Kale Clague (0-3-3), Paul LaDue (1-1-2) and Tobias Bjornfot (1-1-2) each chipped in with a multi-point game.

The victory keeps Ontario in fourth place in the Pacific Division, following a San Diego victory over Stockton. Ontario concludes the week with a Saturday evening tilt against Bakersfield tomorrow, with puck drop slated for 6 PM.

Carl Grundstrom on his line with Brett Sutter and Sheldon Rempal
I think we skate hard, all three of us, and we all work hard. We try to make plays and it’s working out pretty well for us now. It feels like all three of us are on the same page, and it feels really good.

On his physicality tonight, and if that was a point of emphasis for him
Yeah, yeah I think so. That’s a big part of my game and I don’t think I’ve done it enough. I tried to do it more today and it worked out pretty good.

On Brett Sutter getting a hat trick and what it means for the team
Obviously it’s great. He’s a great captain and everyone is following him. It’s so much fun to see him get a hat trick, for sure.

Mike Stothers on Brett Sutter getting a hat trick in such a big win
He means everything to our hockey club, and he’s the leader of our hockey club and we had a big game tonight. This meant something to us to beat a team that we hadn’t beaten all year, and we’re fighting for our playoff lives. Who comes up with the biggest game of the year, when you need it the most? Your captain, Sutts, that’s just what he does. I know he’d probably like to have more points on the board, more contributions in the goals total, but it’s not always about that. It’s about how he conducts himself and how he makes sure that everybody on the team is looked after, and how he makes sure that everybody’s doing the right thing. He’s the epitome of a captain.

On if tonight’s win felt even more important, to ensure not getting shutout against Tucson for the season
Well, I mean we had a little burn in our saddle. We felt we deserved better in some of the games against Tucson, but we always seemed to find a way to shoot ourselves in the foot. There’s been games where we felt they didn’t necessarily beat us, we beat ourselves and by that I mean we’ve taken an awful lot of minors. We went into this game taking 47 minors over seven games, that’s a lot, it’s almost seven a game so we weren’t giving ourselves a chance. This one, we made a pact, a commitment to each other, that we weren’t going to take unnecessary penalties, we were going to stay on the ice and play them 5-on-5. As it turns out, it worked out. There were three penalties a side, we were able to use all four lines because we weren’t in the box. We were able to get our line that goes out fourth out there and really bang and crash and establish a real strong forecheck and the rest of the team kind of fed off of that. It was kind of nice to see, that a team that’s hard their way with us, we proved to ourselves that we can play with anybody. The only time we stumble is when we beat ourselves.

On turning the momentum of the game with the four-minute kill when down 2-0
Yeah, we got down by two and the second one goes off a guy’s skate and redirected in. We look at the clock and go there’s still plenty of time, but then all of a sudden, as we talked about, we don’t want to take penalties and we take a four minute penalty for high sticking, but we did kill it off. I think that was crucial for us. I thought that gave the guys the sense of, “okay, we’re not taking any more penalties, let’s play them.” The thing we like about our team is we feel that we can play with anybody on any given night, if we play the way we need to play and tonight we did. We stuck to the structure we needed to, we got contributions from the back end, we got contributions up front, we got some solid saves when we needed to and when we needed a goal on the power play, we scored one there. We did all of the things we needed to do. We can enjoy this for 12 hours, and then it’s time to get re-focused on Bakersfield.

On the Grundstrom – Sutter – Rempal line, tonight and as of late
We’ve had some pretty good balance in our lines. Prior to Gabe going up, we felt that we had lines that can play against anybody on any given night and any one line was the line that had been the dominant line. Tonight, it was Sutts’ line with Carl and Remps, and they were all +3 or +4, and they all had points sprinkled throughout the lineup and maybe tomorrow it’s Jaddy’s line. That’s, again, the sign of having some good depth and teams that are capable of some success. Timmy Schaller’s come in and given us some real good minutes in the middle of the ice. We’re still getting to know him, he’s still getting to know us, but you can see that this guy’s an NHL player and he’s a good fit with Eyssimont and Fiore. Four lines, six D and a goalie. That’s what you need to win.