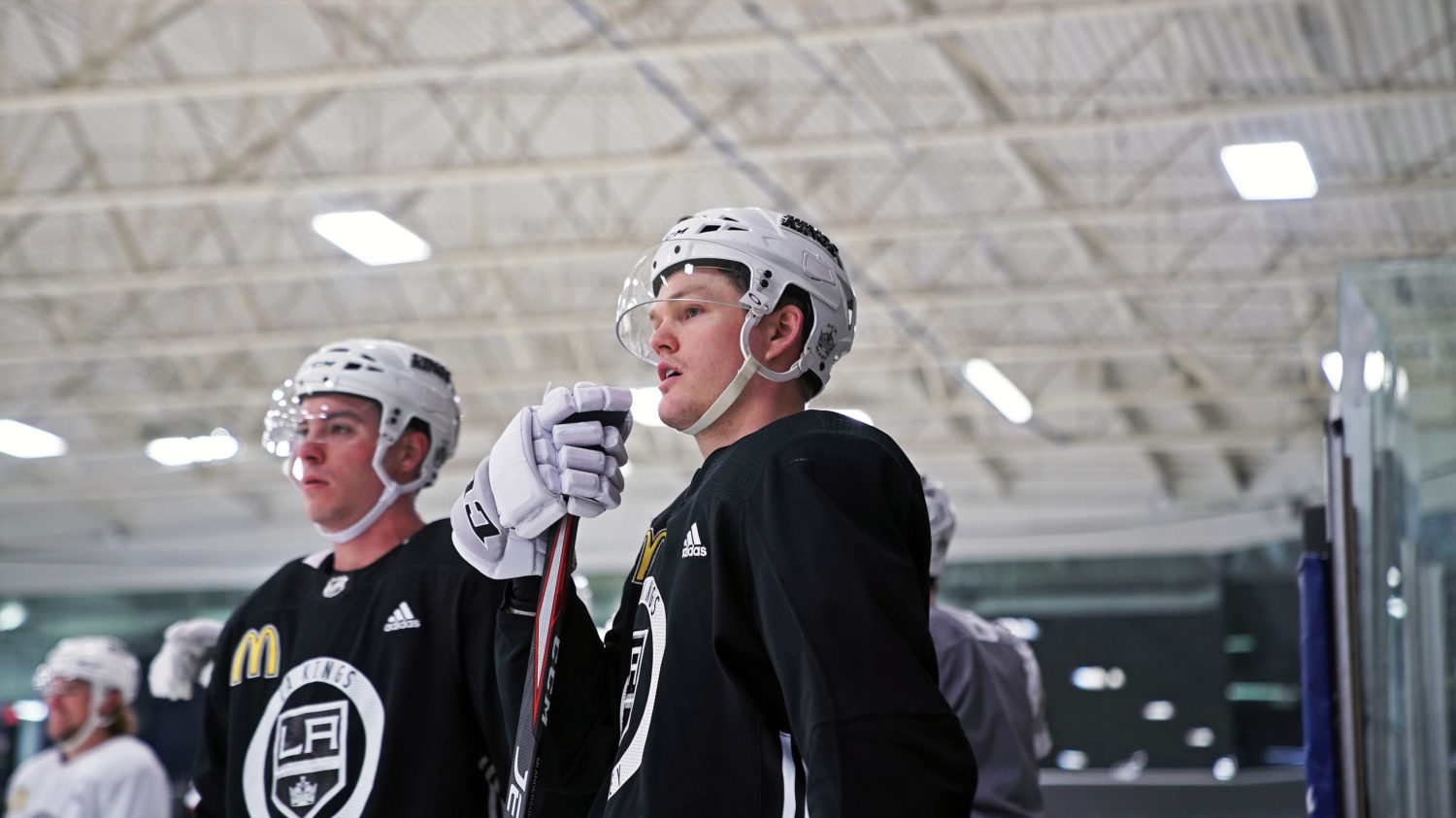 If only our own plans and logistics came together with such serendipity as they did for the Anderson family.

When Mikey Anderson debuts against his brother Joey, a New Jersey Devils forward 11 months his senior, he will do so in front of their sister, their parents, and a very close family friend.

These are, as it turns out, the fruits of a family vacation booked months ago.

“It’s funny, because they were actually out here as it was for the last week,” Mikey said. “We had a bunch of home games with Ontario, and they were hoping Joey would be called up by this time of year, so everyone was already out here. Me and my brother got one of our best buddies from our childhood flying in today, so he’ll get to come hang out.”

As rare as a fully attended dinner is for a family with two sons playing pro hockey and a daughter who played at D-III St. Scholastica, the Andersons’ cup of love overflows. This marks the second family reunion in as many months after the group had converged upon the Inland Empire when Joey represented the Binghamton Devils in the AHL All-Star Classic. They’d even gotten together earlier in the week when the Reign played in San Jose and the Devils were in town to play the Sharks. It’s important to note, because both players – team captains in consecutive years for the United States’ world junior team – credit their parents for stoking and building the leadership attributes inevitably referenced in any evaluation of theirs.

“It’s something I feel I have a lot of, and I think it just kind of comes naturally, and I can thank my parents for that one,” Mikey said. “It’s just showing up to the rink every day, doing what you do, doing my job and hopefully trying to make my teammates better every day. We can grow as a team and as a group.”

Joey Anderson discusses the possibility of facing off against his brother tomorrow.

“It’s super exciting. We talked about this potentially happening, it gives me more excitement for him than anything I do. It’s pretty neat that I’ll be able to watch it and play against him.” pic.twitter.com/NfbplcMTVk 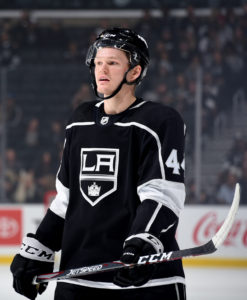 This was a recall that became imminent in the lead-up to the trade deadline, when it became apparent that Los Angeles would move both Alec Martinez and Derek Forbort and AHL reports on Anderson were coming back universally positive after the natural feeling-out process experienced by virtually all players early in their first pro season.

“He’s just gotten better and better. Mikey’s just a smart player out there,” said Sean O’Donnell, Player Development. “Obviously he’s never experienced the speed and pace and strength of guys at this level, but as far as understanding what the other team’s trying to do, his anticipation is very good.”

More on that intuition and two-way play – aspects that help him make quick, fluid decisions – in a moment. One thing regularly referenced over his final year of college hockey and into his first pro season was that he was ahead of the development path they’d set out for him after he’d earned major minutes in all situations in both college and at against top competition at world juniors.

“I saw Mikey play last year, or over the last few years, a number of times. He was a factor in all of those college games,” said Todd McLellan, whose son, Tyson, plays at the University of Denver and competed against both Anderson brothers. “…He’s a very steady player, positionally sound, a puck-mover. From an offensive perspective, nothing really flashy, but consistently getting pucks through from the point and finding open outlets. He’s been able to do that at the American League level, and now he’s going to get the opportunity at our level to see where he fits in and to evaluate himself at the National Hockey League level.”

So, welcome to the Land of Opportunity, Mikey Anderson. Similarly versatile defenseman Kale Clague, who spent four games up with the club earlier this season, is essentially in the same boat. Anderson, who has played on the right side in the past, will skate to the left of Matt Roy in his NHL debut. He’d skated with Clague, who more regularly plays both the left and right side, leading up to his recall.

As McLellan described before Wednesday’s game, Los Angeles executives will take Ontario’s playoff push into account when rewarding players with a call-up amidst a expanding pool.

“We’ve got two teams we’ve got to think about, ours and theirs – theirs being the Reign,” he said. “Both are very important. They have an opportunity to get into the playoffs, but we’ve got to balance the reward system out, the opportunity to give a few players some experience here. A number of them down there have been up. I think of Luff and Grundstrom and Clague – those players have already been up here. There’s a few more that we’ll likely give an opportunity to just so they can experience what it’s like to play at this level, and I think it’s important that they have a checklist for themselves as they head into the summer. I’ve heard player it’s easier to play up here. ‘it’s a little more organized.’ And then all of a sudden they play three or four games and it’s fast and it’s hard and the adrenaline’s gone and it becomes real. You’ve got to get that out of your system so when you go home you have a checklist of what you want to do.”

“But we also want the team down there to push really hard to get into the playoffs so they can gain some experience that way. Now, it’s not overly fair to that group. We’ve got a lot of their players here right now playing on our roster. But the ones that are there, they’ve got to push as hard as they can to gain that playoff experience, too.” 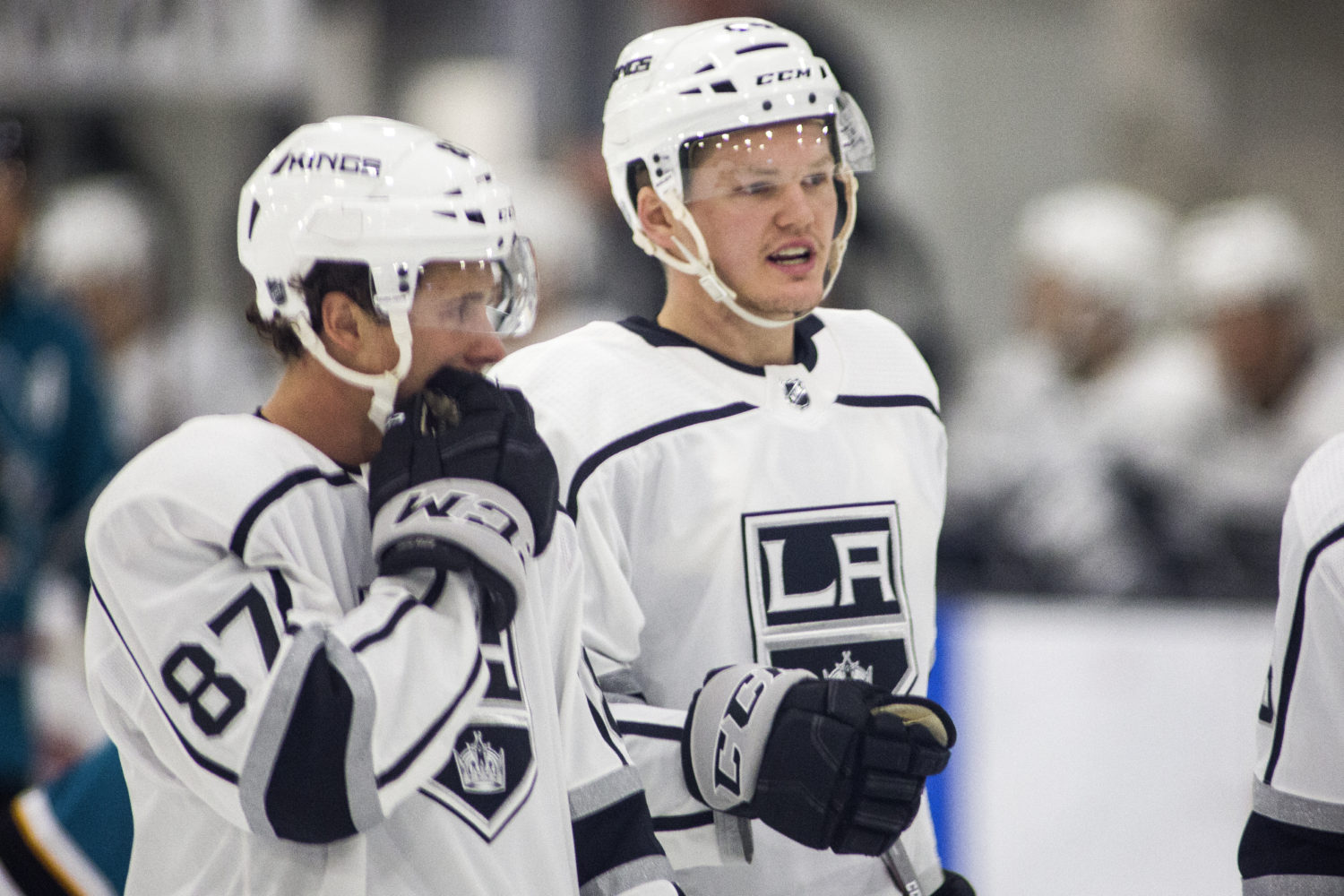 Sean O’Donnell, on whether Anderson’s intuition and poise accentuate his pace:
I think so. I think with most guys coming out, he’s a young guy, he’s 20 years old. He still probably has some strength to build up, which is good, because he’s playing at such a good level down there and he still has room to grow that way. I think his ceiling is still much higher, but the things that he can do, the things that he does well are very hard to teach. I always say that everything he does has a purpose. He passes to this guy because there’s a purpose to the next play, or he goes back for a retrieval and there’s a purpose. He doesn’t just do things. When you ask him why he did the things he did, he has an answer, and it’s usually the right answer, so he’s a fun player to watch.

Mikey Anderson, on his style of play:
I would say I’m a two-way defenseman. Obviously, everything for me starts more in the defensive side, but the last couple years, my offensive game has gotten a lot better. It’s kind of been on the up for me. But overall, I am more of a defensive guy. I move pucks well and try to create offense from defending.

Anderson, on appreciating Ryan Suter when he was younger:
He kind of was a guy that could do it all. He was a power play guy, penalty kill, played a lot of minutes. Just kind of the way he controlled the game, I try to emulate that.

Anderson, on the conversation with his brother when he was recalled:
It’s pretty special. I’d actually seen him in San Jose. We played there Wednesday with Ontario, so he came to the game, got to see him after, and found out yesterday. Gave him a call right away. I think he might’ve been more excited than I was eright away. It’s obviously a really special moment for us.

Anderson, on his parents’ reactions:
They were really excited – just having it happen with my brother last year, you get to be a part of it, it was pretty cool. And then you kind of dream about being able to both be there, and the fact that we have a chance to play against each other is really, really special.

Anderson, on whether he or his brother was more competitive in one-on-one games:
It probably was about equal. He has a line that I know how to get him to cross, so I’d kind of say we’re both competitive together, but once I get him to his limit, I think he takes over and I start laughing. But I think I’m the only one who knows how to push his buttons like that.

Anderson, on his natural intuition, and whether it’s also something that can be accentuated:
I think a lot of it just growing up, it’s learning from mistakes, things that happen that don’t go well, and then learning from things that go well. You kind of learn where to be, where not to be and what can help you be successful, and as I was younger, I found out that being in the right spot all the time is going to go a long way. You’re less tired, you’re more efficient, and that’s something that I try and learn – when you make a play, get back in position. I know we talk a lot with O’D and O’C about making sure we’re in the right spots and going over little stuff like that.