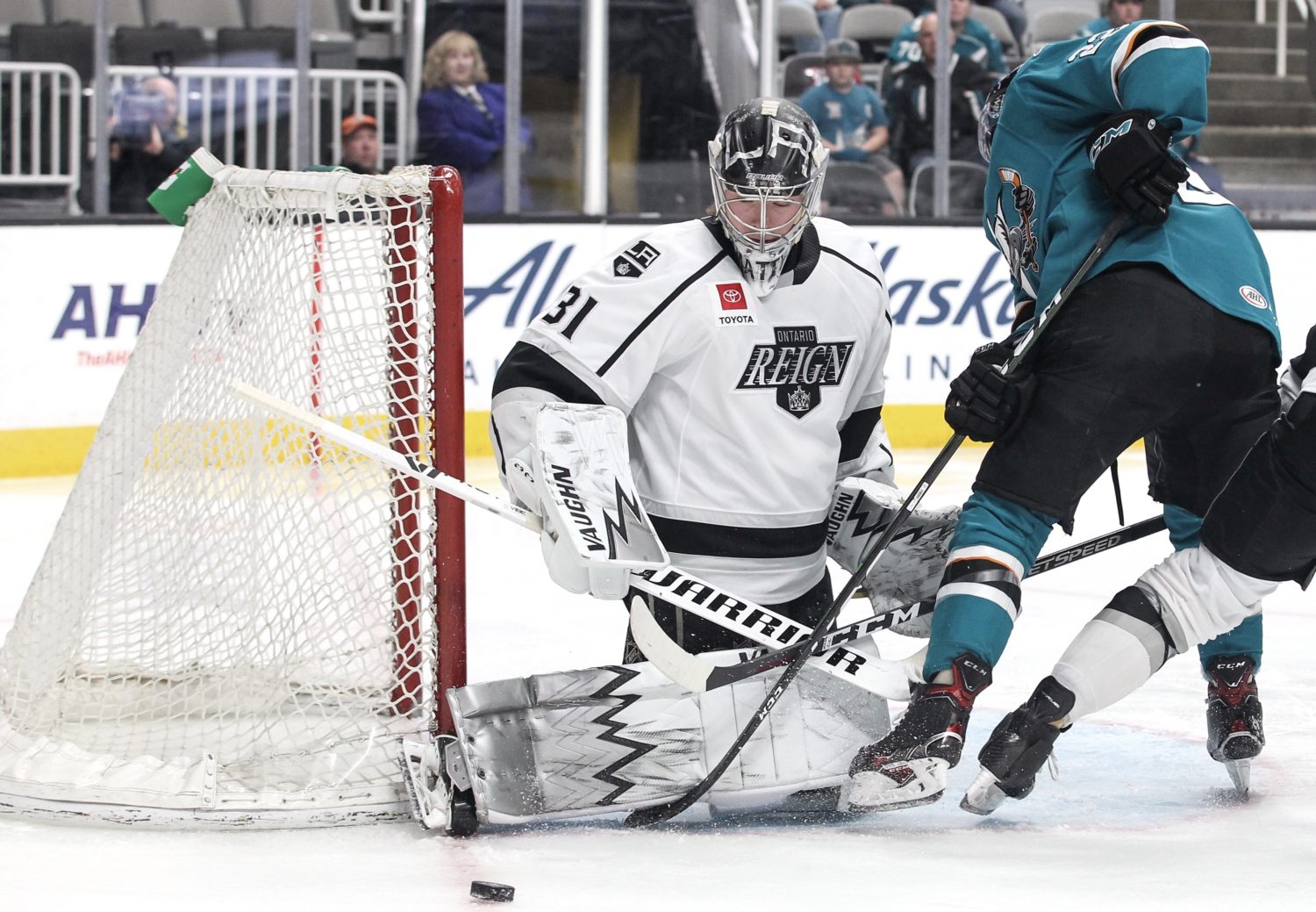 TONIGHT’S MATCHUP: The Ontario Reign are back in action to begin a three-in-four set this week, beginning tonight in San Jose. The two teams are set for a rematch this evening, following San Jose’s 5-2 win over the Reign on Sunday afternoon in Ontario.

WHAT TO WATCH FOR: The Reign skated this morning in San Jose, with goaltender Matthew Villalta the first goaltender off, as tonight’s expected starter. On late were forwards Drake Rymsha, Johan Sodergran and Jacob Doty, along with defenseman Sean Durzi. Expect to see Tim Schaller in the lineup for the Reign to make his team debut. More to come later today from Schaller in advance of tonight’s game.

PLAYOFF PICTURE: For just the third time in 52 games this season, Ontario ended a game outside of a playoff position, following Sunday’s 5-2 defeat against San Jose. The Reign, who previously ended a game outside of the Top 4 in the division on January 11 and November 30, sit one point behind San Diego, with the Gulls also owning two games in hand. Both teams are in action this evening, with San Diego in Tucson for a midweek tilt.

BACK-TO-BACK: Ontario lost back-to-back games this weekend for the first time since January 10 and 11, the latter two in a string of three straight losses. Since January 11, Ontario has lost just twice in regulation, and has posted a 10-2-2 mark, good for a .786 winning percentage. The Reign will carry a six-game away winning streak into tonight’s action in San Jose, its longest winning streak on the road this season.

OFFENSE FROM THE DEFENSE: Through Sunday’s games, Ontario ranks second in the AHL in both goals by defensemen (37) and percentage of total goals by defensemen (25%) this season, trailing Charlotte in both categories. The Reign are also one of just two teams in the AHL, along with the Checkers, to have three or more defensemen with eight or more goals scored this season, with Paul LaDue, Austin Strand and Kale Clague all tied for the team lead amongst defensemen.

MAKING MOVES: Ontario has made a slew of roster moves this week, resulting in Tim Schaller and Jacob Doty joining the team tonight in San Jose. Schaller was assigned by the Kings on Monday, and brings 276 NHL games with Buffalo, Boston, Vancouver and Los Angeles, and over 400 career professional games in total. Doty returns to Ontario after he tallied three assists from three ECHL games played with Allen.

BJORN AND RAISED: Reign defenseman Tobias Bjornfot led his team with a goal and an assist on Sunday against San Jose. Bjornfot tied AHL single-game career highs in both categories, as he recorded a multi-point game for the second time as a member of the Reign. The 18-year-old defenseman enters tonight’s game against the Barracuda with five points (3-2-5) from five games played in the head-to-head series.

RED BYRON: Ontario forward Blaine Byron assisted on both Reign goals on Sunday, as he collected his third multi-assist, and fourth multi-point, game with Ontario this season. Byron, who was acquired in a midseason trade with Springfield, tied his AHL career high in assists in a game, which he’s reached three times this season and five times in his career. The 25-year-old forward has 18 points and a +6 rating from 24 games played with the Reign this season.

SCOUTING THE BARRACUDA: San Jose has the five leading scorers in the Reign – Barracuda head-to-head series this season, led by forward Joachim Blichfeld, who leads all scorers with nine points (5-4-9). A quartet of San Jose skaters have seven points in head-to-head play against Ontario this season, including forward Jayden Halbgewachs, who led the Barracuda with a goal and an assist in Sunday’s victory.