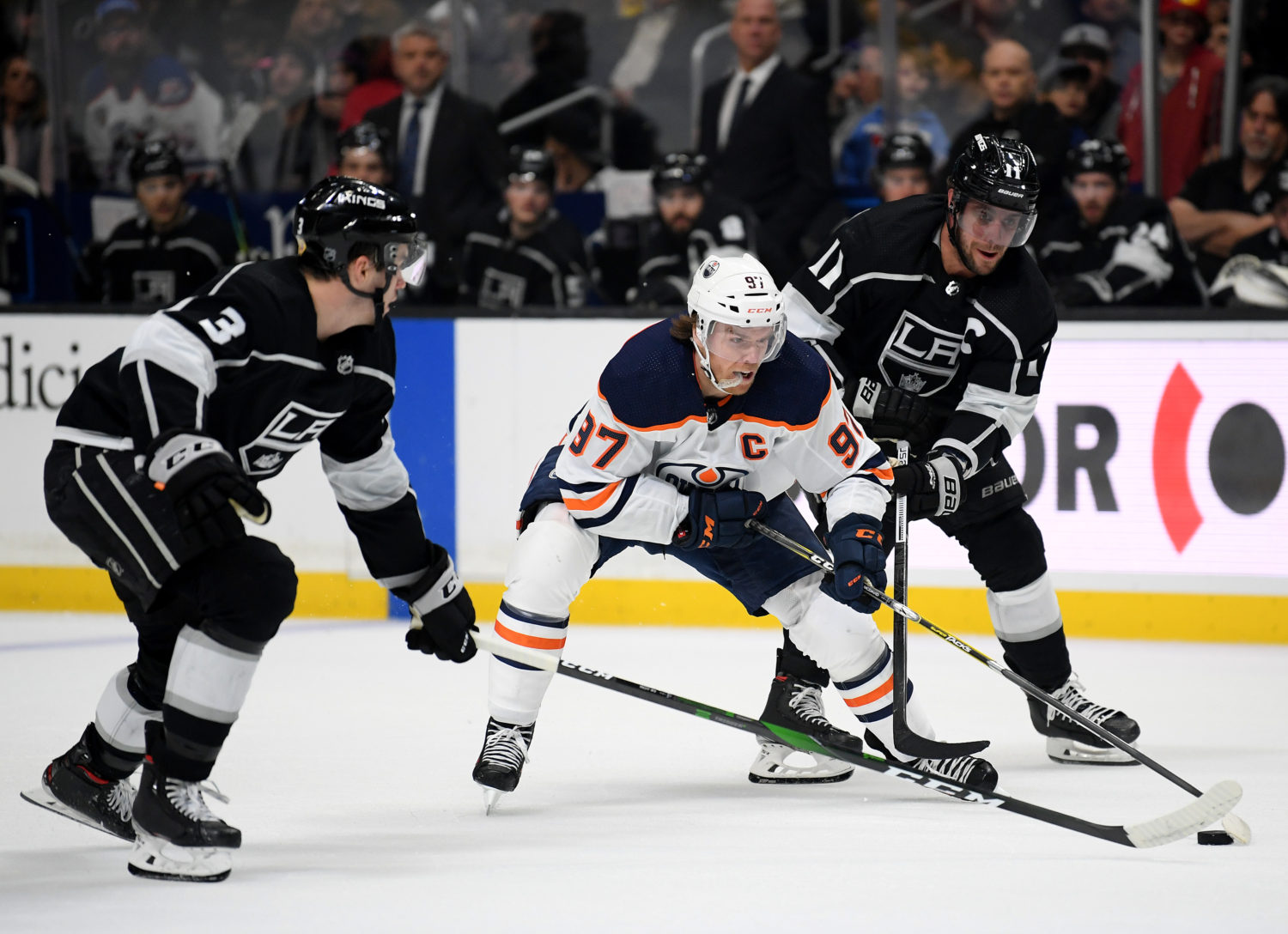 INSIDERS. Several notes. Todd McLellan’s quotes are at the bottom. First, some bits prior to Monday’s 12:00 p.m. PT trade deadline:

— In advance of the deadline, the Kings will make several “paper transactions” in which they temporarily assign a player to AHL-Ontario’s roster before recalling them. You are familiar with this mechanism to ensure players’ eligibility for the AHL’s Calder Cup Playoffs. Keep in mind that per the CBA, each team is permitted four post-deadline recalls, though there’s some wiggle room there based on emergency recalls, which don’t count towards the four (and was used in Matt Luff’s recall last March 4).

Because Martin Frk played in his 10th game of the season tonight, he would have to again clear waivers in the hypothetical event the Kings would want to make him eligible for Ontario’s playoff roster. This is because players again become waiver-eligible after playing 10 games or appearing on an NHL roster for 30 days (he’s at 23 as of Sunday). It’s not going to matter; Frk is expected to remain with the club through the remainder of the year and his season will end when the Kings’ season ends on April 4. The Reign, who lost to the San Jose Barracuda today and fell out of a playoff position, are battling to get in.

— Forward Tim Schaller was placed on waivers earlier today and did not play against Edmonton, though his stall remained intact in the Kings’ dressing room at Staples Center. I’ll wait until he clears tomorrow to share an update, though keep in mind such a transaction provides extra flexibility for Los Angeles at the deadline, and while he may ultimately be assigned to Ontario, this as of now might not be as simple as a “player goes down / prospect comes up” transaction. Somewhat related: I’m expecting defenseman Mikey Anderson to get recalled very soon. His time is nigh.

Todd McLellan, on the loss:
Certainly not the result we wanted. I thought we had some good moments. The negative was the number of odd-man rushes we gave up to their two top players. We really tried to focus on that before the game, and a lot of those came out of scrums along the boards where we didn’t support it very well. Maybe had a D down in the play, the forwards weren’t prepared to cover properly and they got a couple goals off something like that and they had many more chances, so that was really disappointing. The commitment to playing to the end and playing hard was a positive, which we’ve had all year. Scoring a power play against that team was a positive. Giving up one was a negative – certainly the way it happened. It was on our tape and then in our net. But I also thought our gas tanks were a little bit empty. Four games in six nights, and you could see the fatigue factor was there. We shuffled lines, tried to get some legs involved in it, but on the short end, and it’s always disappointing when you lose.

McLellan, on whether it’s frustrating there are still coverage lapses despite improvement:
Tonight was not a good night in that situation at all. It was evident. We actually worked into position a few times and then were abusive with our willingness to cover or jumping in before the puck was under any type of possession, and that’s on the forwards. The D turned it over on the half-wall pinching down a number of times, so I think there are things there that we can fix. There are details that we took care of. Everybody has to understand that they have to check to win. You can’t gamble to score. We’re not made like that right now, and there’s nothing wrong with working on our checking skills and becoming a really sound team that way. We’ll take that. Yet I think there are individuals that think they’ve got to score their way into the lineup regularly, and we’ll have to fix it. We’ve got to clarify what we want to do right now and move forward.

McLellan, on how the Kings were able to keep the puck out during most rushes:
Well, the goaltender made some good saves, obviously, and then there were a couple that were broken up by defensemen. But we can’t put ourselves in that situation, not with the two leading scorers in the National Hockey League and they’re both going to be up for the Hart Trophy. It’s pretty simple math.

McLellan, on whether it’s youth that feels they “have to score their way into the lineup”:
Not necessarily, because I saw more experienced players doing that, too. I think that squeezing the stick and willing to gamble – you can’t do it. There are teams that’ve won Stanley Cups checking. Do we want to evolve into an offensive team? Yes, but we also have to work on our checking skills, and this team won championships because of it. Everybody bought in and everybody checked and they didn’t need to score six a night, they could score three a night. We still need that. We don’t want to lose that, and we’ve got to be trained to do that. The offensive part of the game will come as time goes on and guys get more experience and develop their skills and maybe we get different types of players in, but quite frankly, if you want to stay in the league right now, on any team, commit to it. We’re learning.

McLellan, on the challenge of keeping focus in the remaining games:
I think it’s showing right now that it will be because we had some situations the other night – I think we talked about long chances. We’ll move guys around and we’ll work on it in practice. For the whole team basically, but realistically there are a bunch of players that are on tryout situations here, and they’ve got to be able to do it. And if it’s not here, it’s somewhere else next year, their coaching staff, their management team is looking, saying, ‘hey, did he do it in LA? No?’ That doesn’t help any individuals out.