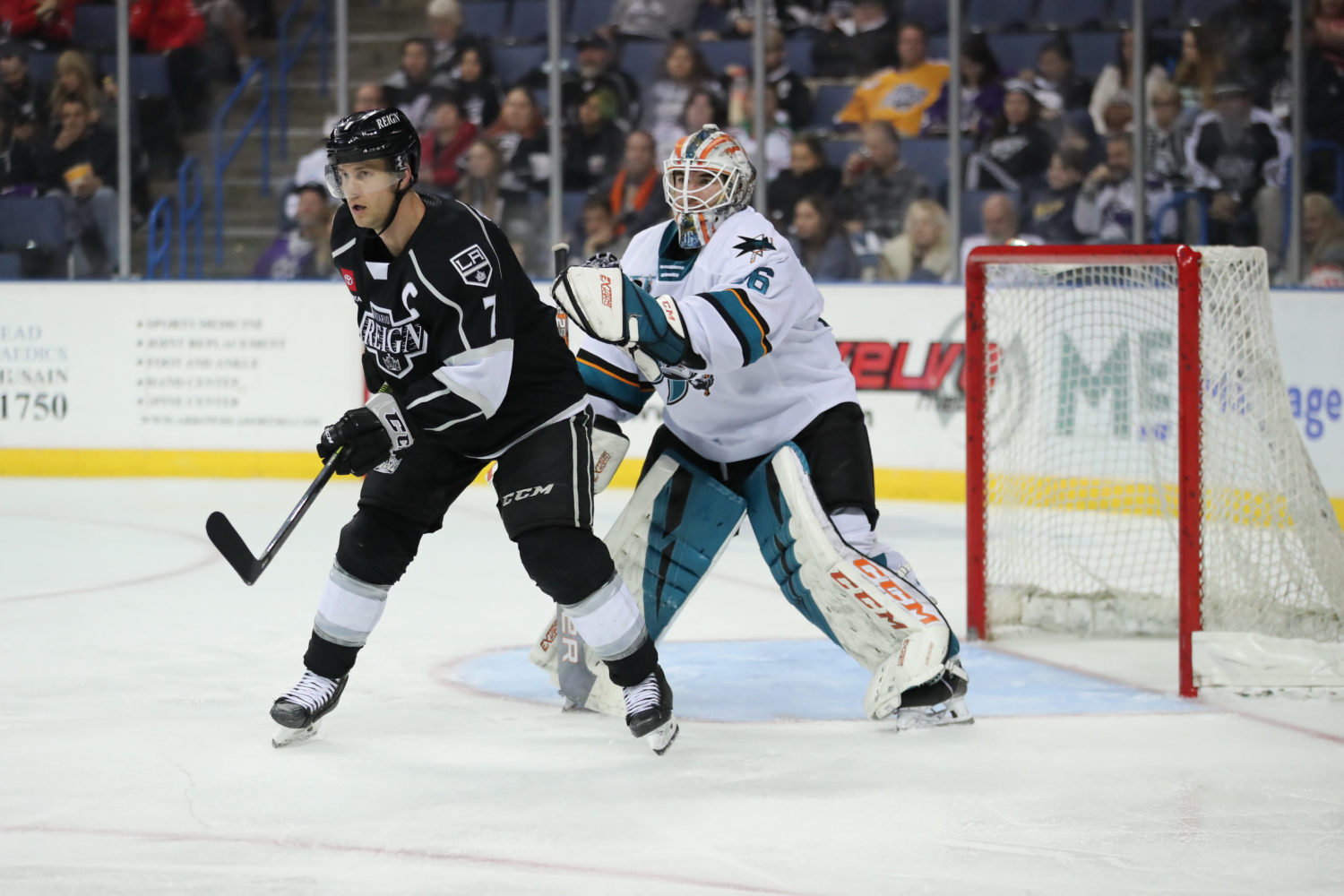 The Ontario Reign came up short on Sunday afternoon against San Jose, during a 5-2 defeat on home ice against the Barracuda. With the defeat, Ontario was unable to reclaim fourth place in the Pacific Division, and remains one point shy of San Diego in fifth place.

The regulation loss was just the second for the Reign in their last 14 games, as the team got away from, especially in the second period, the “meat and potatoes” style of hockey that has made them successful at points this season.

Ontario got goals from forward Matt Luff, who has four goals and eight points in the seven games since he was assigned to the Reign, and defenseman Tobias Bjornfot, who collected a multi-point game (1-1-2), the second of his AHL career. Bjornfot has both multi-point efforts against the Barracuda, and has five points (3-2-5) from five games played against San Jose this season.

The Reign will have little time to re-group – they hit the road for a midweek tilt against these same Barracuda on Wednesday at SAP Center, before a pair of home games this weekend in Ontario.

Tobias Bjornfot on what he felt was missing in the second period, that put the Reign behind
I think it’s a little late rush. We need to get the puck to the net and shoot more.

On his goal, and getting pucks on goal
Yeah, maybe. It was a good screen too, and more guys need to get it on the net there, when we have screens.

On if recent player transactions have affected fluidity on the power play
I think that doesn’t matter. We have a lot of [skilled players] on this team, and everybody can play on the power play. It’s not a problem.

On turning things around for Wednesday’s rematch
It’s a quick turnaround…video on Tuesday, then a hard practice and then we need to play better on Wednesday. [Reporter: There’s not much time right, so you’ll need to turn things around on the fly a bit?] Yeah. It’s the business and we’ll need to get better.

Mike Stothers on Brett Sutter assessment of a strong first period, but a letdown in the second
I would agree 100 percent. I told them after the first that was a great period, but the second period, we decided we were going to try drop passes and high-risk plays that result in a turnover or a goal against, a turnover results in a 2-on-1 against, a turnover results in a penalty against. I mean, it’s not playoff hockey. You make the team work for the puck, you don’t give it to them. We brought on some unnecessary problems for ourselves and we never quite recovered from it.

On seeing the desperation level from the third earlier in the game
Well, yeah, but I mean we played a smarter game, we were playing with better puck protection and puck awareness than we were in the second period. We still have some tendencies to get away from playing the meat and potatoes game that we need to play to have success, and we still like to think that we can order the seafood tower and play the fancy way, and it bites us in the old backside.

On if getting away from that style is a matter of just execution, and if the group knows by now how they have played successfully
Oh no, you have to remind them all the time. That’s the beauty of this game. You have a little success, and everybody thinks that they’re going to be like the Harlem Globetrotters playing against the Washington Generals, it just doesn’t work that way, but it’s a natural tendency.